Spoilers: An intervention and Brent’s shock arrest in Neighbours 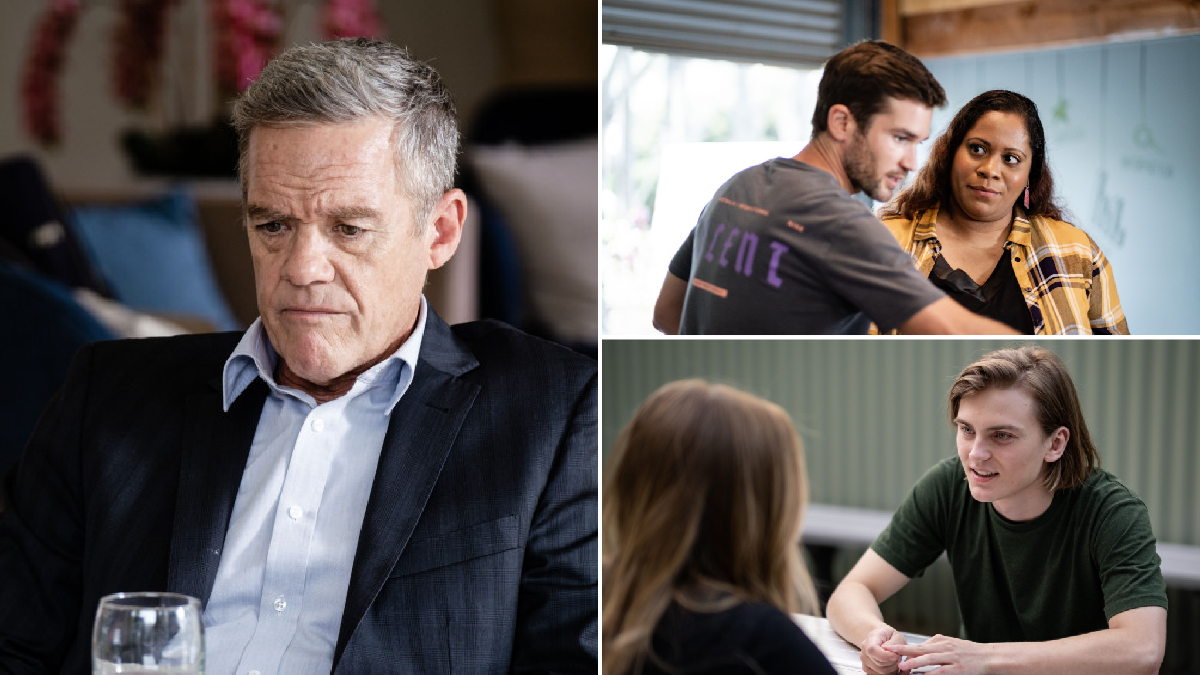 Love is in the air in Neighbours this week with declarations of the L Word for one couple and a test of feelings in another. But it’s not all red roses and heart-shaped balloons, especially when one pair find themselves ripped apart by the law.

Harlow (Jemma Donovan) finally manages to track down Brent (Texas Watterson), but instead of a magical reunion, the pair are left destroyed when Paul Robinson (Stefan Dennis) to bulldozes his way in and potentially ruin the teen’s life. How could he do something so terrible?

There’s finally love in the air for Levi (Richie Morris) and Bea (Bonnie Anderson) despite their rocky times of late. But while one of the is over the moon, the other’s mind is starting to wander elsewhere. What will it mean for them?

Things are not getting any better for the parents-to-be. David (Takaya Honda), Aaron (Matt Wilson), Nicolette (Charlotte Chimes) and Chloe (April Rose Pengilly) are still at loggerheads and the future is looking bleak for their baby. That is until an intervention is staged.

And the mystery around Sheila C (Shareena Clanton) deepens when things with The Hive take an unexpected turn. What is her game?

Here’s what’s ahead in Neighbours this week.

Terese tells Ned she has to dob him in to Paul for giving the financials to Sheila C, which is not great news. He braces himself for Paul’s backlash, but when Paul somehow retains his cool, Ned is a bit lost for words. He later finds out Sheila has offered to pay more for The Hive. But why? There’s something fishy going on here.

Harlow dons her detective hat to track down Brent and manages to work out he’s been logging on to the Year 13 Portal, giving her the opportunity to message him. She arranges to meet him, but with Terese and Mackenzie not letting her out of their sights in a bid to cheer her up, it’s proving tricky. Hendrix senses something is going on and offers to help cover for her so she can get away, not realising what he’s helping her do. When she meets Brent, she lets him know how upset she is with him, and she realises she’s facing a dilemma – does she tell the police where he is?

She’s in trouble though, as Hendrix is no daft cookie and discovers what she’s been up to, leaving him shocked at what he helped facilitate. She begs him to keep it a secret but he has one condition, that he gets to speak to Brent. And when he does, he tries to convince him to come clean, for Harlow’s sake.

Bea and Levi have hit the next milestone, they’ve said the L word! Levi is over the moon, he’s completely besotted with his lady love. But does she feel the same? Bea is so happy they’re back on track, but things are changing for her. She’s excited about her new podcast and after losing her job at the garage, thinks she might not go back to mechanics. But is she going to stop there or is she ready to seek a new adventure?

An intervention for the parental quartet

Things are decidedly frosty for Chloe, Nicolette, Aaron, and David. Nicolette is still upset at the lads choosing Emmett over her despite the danger his brother put her in. They’re also still pretty miffed that she hit them with an ultimatum. Things are dicey and god knows what kind of custody battles could ensue if this plays out. There’s only one person who can save them, Jane. She returns from Mildura and walks right into the tension. Aaron and David are petrified fof what all of this means for the future of their modern family, so Jane stages an intervention. Will it work?

Who does Hendrix want?

Mackenzie is understandably gutted to learn Hendrix has been helping his ex track down her new boyfriend. Mack suspects he’s not totally over Harlow seeing as he’s been keeping secrets from her. Mackenzie wants to know the truth about what Hendrix wants, or rather who. Will he choose Mackenzie or Harlow?

Brent knows what he has to do, he needs to do the right thing. Harlow isn’t ready to let him go and asks for just a few more hours with him before they part ways. Sadly for them, those few hours cost him everything. While they’re dragging out their goodbye, Paul is in the cop shop ratting on Brent. Next thing the lovestruck couple know, the boys in blue have arrived to cart Brent off in handcuffs and poor Harlow is devastated. Has Paul ruined his relationship with his granddaughter for good?

Scenes air from Monday 24th May on Channel 5.