STEPHEN GLOVER: Justin Welby speaks trendy, shallow nonsense. I’ve no doubt he’s a good man… If only he were a wiser one

Should senior churchmen involve themselves in politics? The Archbishop of Canterbury is certain they should.

In a recent newspaper interview, Justin Welby declared: ‘The idea that I shouldn’t be political is . . . a nonsense. Everyone is political . . . Every decision we make is a political decision.’

Karl Marx might have approved of such sentiments but it is an odd thing for an Anglican Archbishop to say. Is walking the dog political? Or giving money to the poor? Or becoming a Christian? Or wanting to take Holy Communion?

What Dr Welby said is nonsense, of course. Trendy, shallow nonsense. I daresay that on reflection he might take it back. The Primate of All England has a habit of sounding off, and then retracting at least part of what he has said.

His latest foray into controversy was to suggest in an interview with ITV’s Tom Bradby that Prince Andrew is ‘seeking to make amends’ following his public disgrace. Unfortunately, he was unable or unwilling to provide a single instance of the Prince trying to atone.

Dr Welby rightly said that ‘forgiveness really does matter’ and that ‘we have become a very, very unforgiving society’. The implication was that we should forgive the Prince for his friendship with the paedophile Jeffrey Epstein. 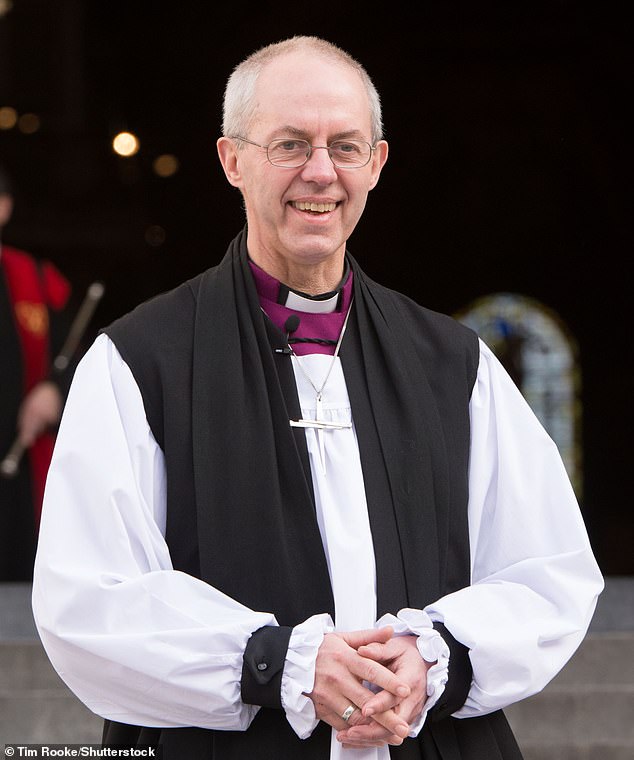 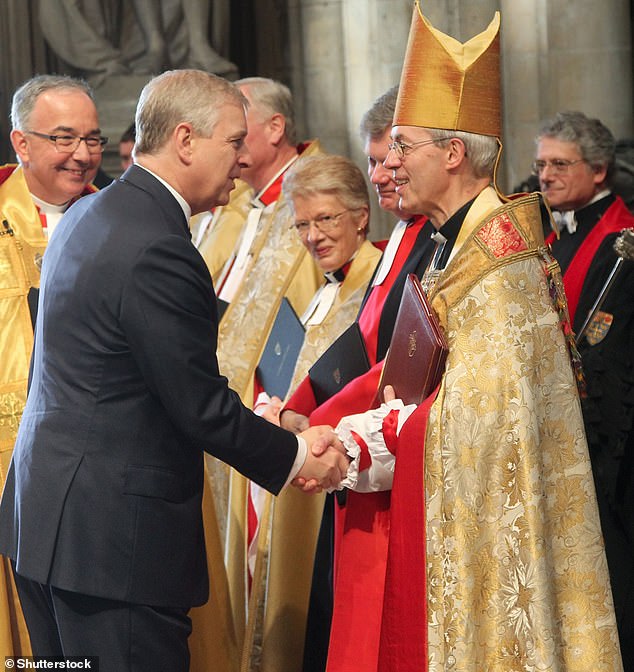 The suggestion was also that we should draw a veil over his out- of-court settlement, reportedly worth £12 million, to Virginia Giuffre, after she had accused him of sexual assault when she was aged 17, an allegation he has vehemently denied.

Dr Welby is a theologian, and I am not, but I had always thought that Christianity offers redemption and forgiveness to those ‘who do truly and earnestly repent’, as the prayer says. There is no evidence of Andrew acknowledging that he did anything wrong.

In his infamous 2019 interview with the BBC’s Emily Maitlis, he expressed no regret over his relationship with Epstein, and said he couldn’t recall having met Giuffre. Nonetheless, he came up with £12 million to buy her silence.

Conceivably the Archbishop knows something about Andrew’s state of mind which the rest of us do not. But if the Prince harbours genuine feelings of contrition, he should convey them to a wider audience. Then he might be forgiven.

The Archbishop, so adept at plunging into controversy, evidently had second thoughts after the interview. His spokesman maintained that his boss ‘was not referring specifically to Prince Andrew when he said we must become a more forgiving society’. You could have fooled me — and millions of others.

Granted, this ill-judged defence of an apparently unapologetic Prince was not strictly political in the way Dr Welby’s interventions often are. He must be one of the most garrulous and outspoken Primates to have occupied Lambeth Palace since the Reformation.

He is forever tweeting, giving interviews, delivering speeches and making ex cathedra statements. He will offer an instant opinion on almost any subject under the sun — before sometimes changing his mind, or even contradicting what he has said. Nonetheless, a new provocative opinion is quickly minted.

His political views are generally woke and fashionable. They might as easily fall from the lips of a secular politician of a mildly Left-wing disposition. I have quoted his contention that he has every right to be political. Not if that entails being party political. 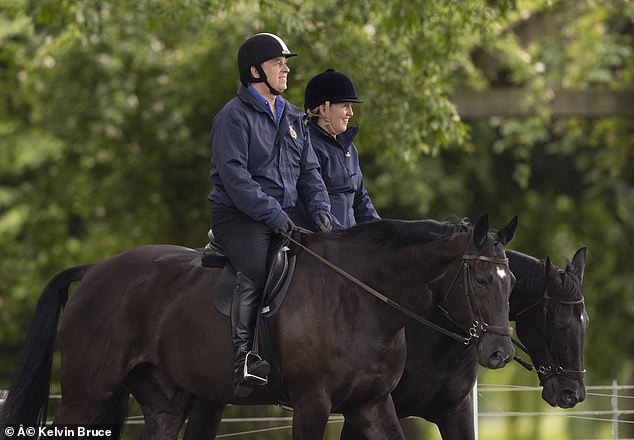 The Duke of York, 62, has largely withdrawn from public life following his out-of-court settlement with his sex assault accuser Virginia Roberts earlier this year 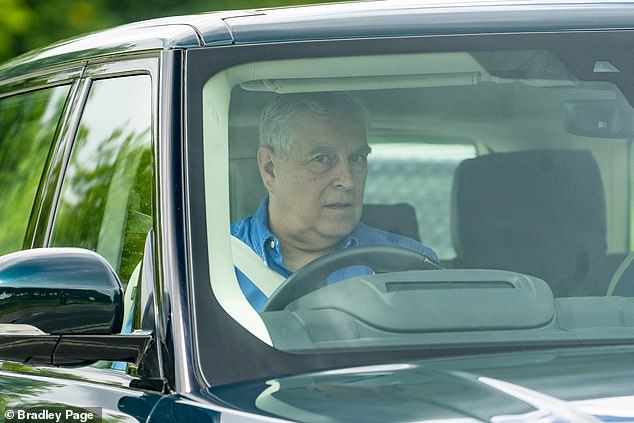 The royal – who will not feature on the royal balcony beside his mother, the Queen, as she celebrates her Platinum Jubilee this weekend – was spotted driving a green Range Rover on his way to the stableson Wednesday

A good example was his recent Easter sermon, in which he let fly at the Government over its plan to send some asylum seekers to Rwanda. He claimed that such a policy could not ‘stand the judgment of God’ — a bold statement since the Almighty’s views about asylum seekers may not always be crystal clear.

I happen to share Dr Welby’s misgivings about Rwanda, since it has a despotic regime where nasty things can happen. Nonetheless, one can’t reasonably criticise the Government’s proposals in such extreme terms without suggesting a workable alternative.

Dr Welby offered no solution to the curse of ‘people smugglers’ who charge asylum seekers extortionate sums to cross the English Channel in flimsy boats which sometimes sink. More than 300 people have drowned in the Channel over the past 30 years.

The Archbishop has a habit of throwing a spanner in the works of government policies he may only dimly understand. Back in 2018, he jumped on Labour’s bandwagon by arguing that the roll-out of Universal Credit should be delayed. It was what the Corbynite Shadow Chancellor, John McDonnell, was saying at the time.

My objection is not only that Dr Welby probably doesn’t grasp the complexities of Universal Credit (which, by the way, seems to be working pretty well) any more than he has got to the bottom of the asylum crisis.

It is also that such remarks, rooted as they are in party-political controversy, are liable to be divisive. Can’t we leave division to the politicians? Somewhat ironically, Dr Welby has just published a book called The Power Of Reconciliation, described by one newspaper as ‘a heartfelt plea to the world to appreciate each other’s opinions’.

The Archbishop may see himself as a reconciler but he is in danger of alienating Christians and non-Christians alike who don’t share his Leftist take on political problems.

Recently he told a newspaper that the Church of England should beware ‘throwing stones’ at politicians. But that’s exactly what he does. It’s rare to find this proactive Prelate without a stone in his hand, about to take aim at a politician — almost invariably a Tory one.

If I were Dr Welby’s spin doctor — I imagine he has several — I would advise him to go easy on the tweets and interviews and other political declarations, and to concentrate on reinvigorating the crumbling Church of England, which faces potential ‘extinction’ within 40 years, according to a recent report.

The hot-headed Archbishop dived in headlong when, a few years ago, unfounded accusations of paedophilia were made against the late Bishop George Bell, who bravely spoke out during the war against the carpet bombing of Germany. It took years for Dr Welby to apologise for his error.

He also grabbed the wrong end of the stick during a row about a monument in the chapel of Jesus College, Cambridge to Tobias Rustat, a 17th-century philanthropist with links to the slave trade.

Various people wanted the handsome monument torn down. Others were against. ‘Why is it such agony to remove a memorial to slavery?’ cried the angry Archbishop, overlooking the fact that it was a memorial to a man, not slavery. An ecclesiastical court determined that it should stay.

Politicians and other objects of Dr Welby’s ire can mostly look after themselves. I worry for the Church — my Church. It still has fine priests and devout worshippers. It deserves a spiritual leader who spends less time engaged in earthly squabbles.

Don’t forget that during the first Covid lockdown, in another rush of blood to the head, the Archbishop had the temerity to tell priests not to enter their own churches over Easter. This was an incredible presumption that caused enormous distress. True to form, he later said he regretted it.

I’ve little doubt that Justin Welby is a good and holy man. If only he were a wiser one.