In good spirits. Eric Abraham was the first castaway voted off Survivor during the Wednesday, September 22, premiere, but he’s taking it all in stride.

The cyber security analyst, 51, expresses his gratitude for even being cast on the show.

“It was a privilege to be selected, not only on this season of cast members that is all diverse cast members, but [to be given] an opportunity to live out a dream that’s ultimately controlled by others,” Abraham tells Us exclusively. “I’m honored to be able to not just to represent myself, but my family and my friends and the people in the community I work in, the cybersecurity community. It’s a great opportunity that I’m humbled by.”

He was ultimately voted out 5-1.

Scroll down to read our full interview with Abraham about his time on the show and how he feels about being out so early. 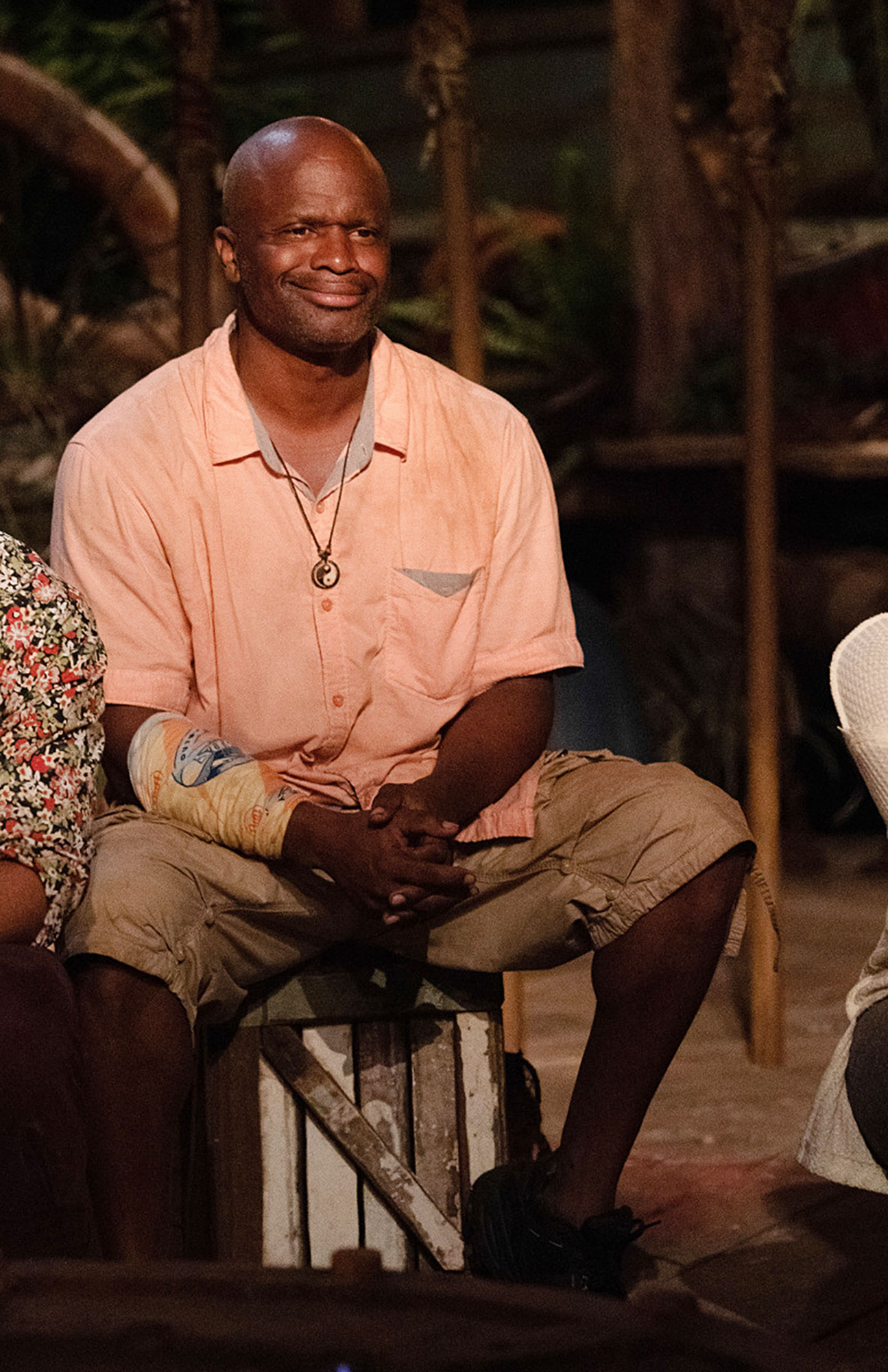 Us Weekly: You said in the moment that you were blindsided. What did you think the plan was going into tribal council?

Eric Abraham: You know what, Sharon, it’s almost like a dream scenario. I was like, “I know I’m one of the strong players. I know I’m going to be here for a while. Let me go ahead and push somebody out there in front of the bus.” And everybody was driving that same bus with me. I saw that happen. No, [Tiffany] didn’t pull her weight in the challenge. You don’t really get that on the editing, but I was like, “I got concrete evidence that she is a low-hanging fruit in our tribe right now. And I’m going to push her out there.” What I didn’t realize was they had already switched buses and I was actually standing in the street about to get hit.

Us: Do you think you were maybe too vocal about Tiffany being the one who should leave?

EA: Survivor is so fast that you think that your strategy is the one that’s the best strategy in that moment. Because then in the next moment, I could have sat there and not said anything, and they’d be like, “Nope, we still want to get Abraham out.” It’s just [doing] what I think might work. And you got, like, 10 moments to … “Oh yeah, it didn’t work.” Nope. It did not.

Us: What did you think about her calling you out at tribal saying that you talk in circles? 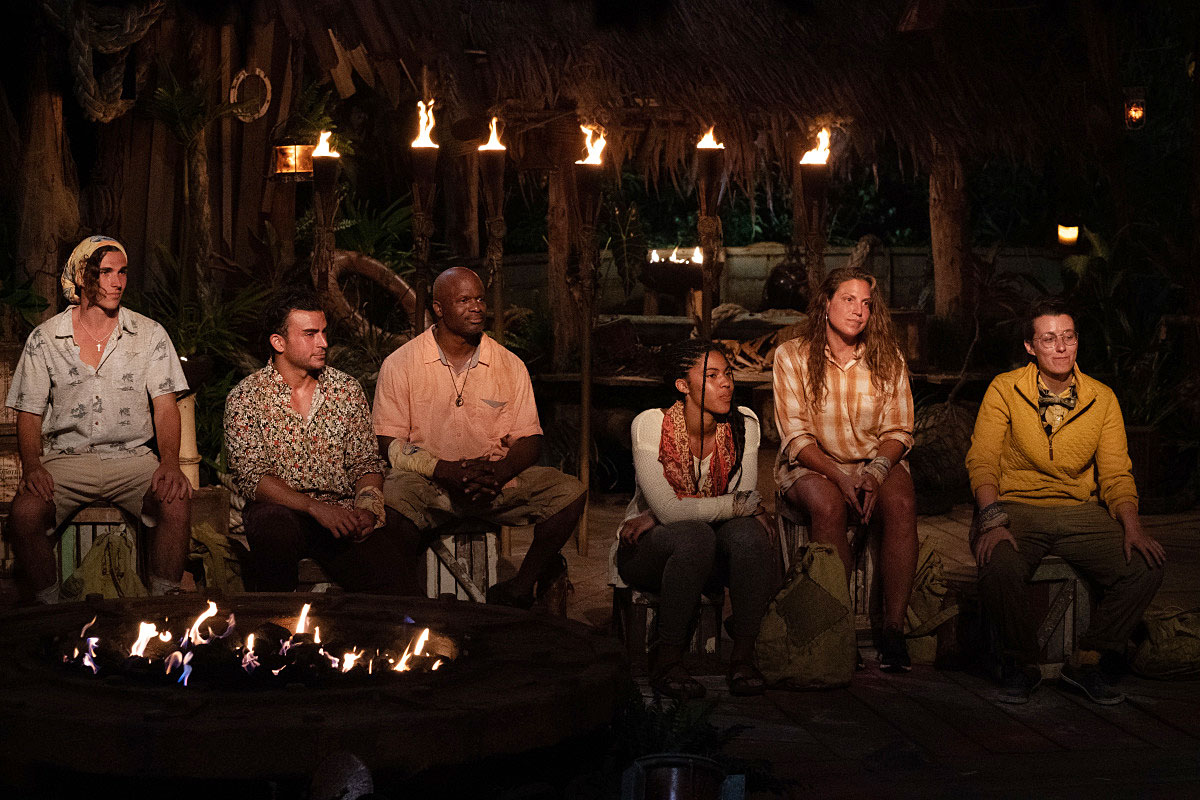 Us: So who did you feel most betrayed by? Who did you really trust out there?

EA: You know, if I have to rack and stack the ones that I would have said, “Hey, we’re going to be the ones that’s going to play a strategy of trying to stay out of voting.” I would’ve said Xander [Hastings], Liana [Wallace], and I would’ve said they probably would’ve sided with me because we want to keep the tribe strong and want to win challenges. [David] Voce is a doctor so he might’ve said a couple of things of lying, but that’s because he is a doctor. He loves people, don’t get it wrong. I went and I said, “You know what? That makes perfectly good sense to me.” But I think we all were thinking in our mind that whatever decisions we make made perfectly good sense to us.

Us: Speaking of Xander, what did you think about his story and decision about the summit?

EA: Like I said before, you got a short amount of time and Xander just had an honest disposition. He has an honest face. We were like, “Out of all of us, who would probably be the one to go and come back, and be more truthful about what transpired?” So that’s how we came to Xander. Not that we didn’t trust our other castmates, but we were like, “Xander [is] probably going to be the best one of us to go.” So that’s how he got selected. And when he came back, I was like “Maybe 75 percent of what he’s saying is true, 25 is what he’s kind of making up.” And I said, that’s a good number.

Us: You were blindsided, but did you think about playing the “Shot in the Dark” die at all?

EA: You know what, the “Shot in the Dark” was something new because as a fan of the show, I’ve gone back and looked at every season of Survivor until I actually arrived on island to play myself. And you’ve kind of got an idea of every type of scenario that you can throw at somebody on Survivor. That was brand new. And it was so early in the game, I’m like, “Not on the very first night of voting.” I didn’t think the “Shot in the Dark” was necessary to use. I said, as we move later on, or even when we got to the merge, the “Shot in the Dark” would be better tool. So I wasn’t even thinking about it at the time. Like I said, it was too early. 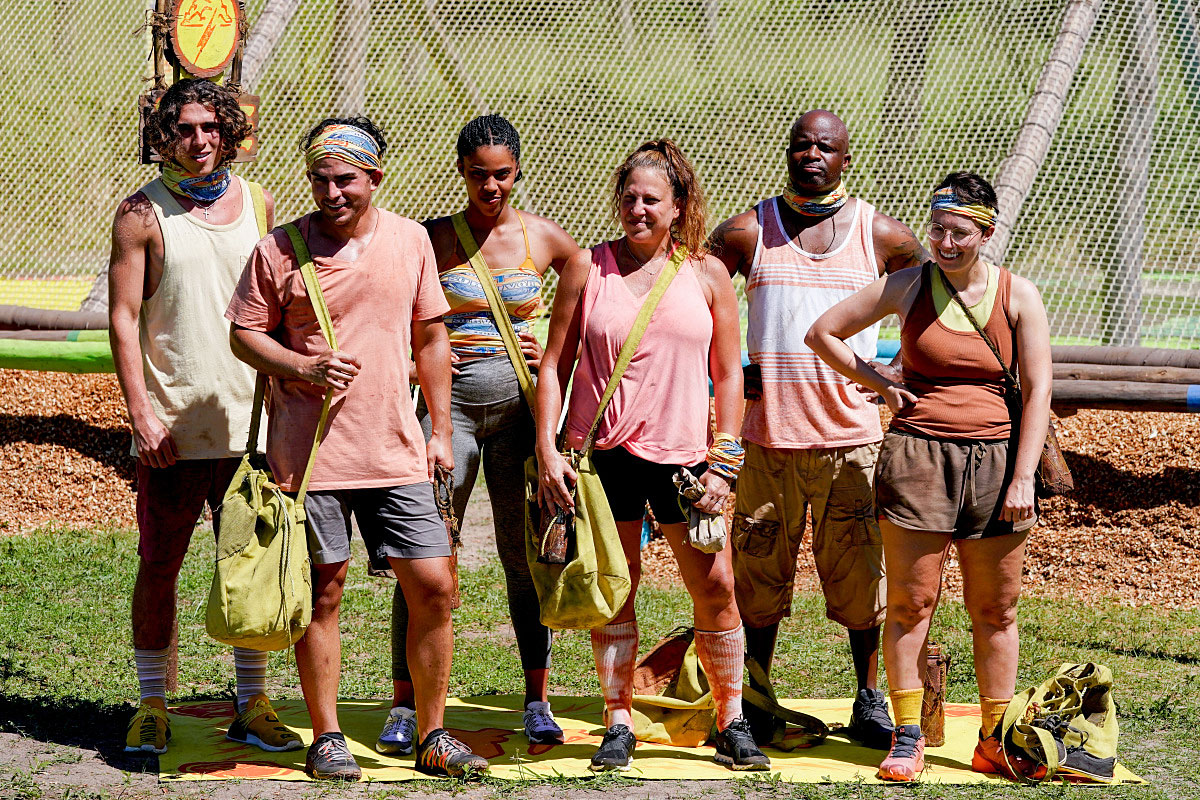 Us: Speaking about all these changes, the show is back after nearly two years of being off the air. What did it mean to you to be cast in this season?

EA: First of all, it was a privilege to be selected, not only on this season of cast members that is all diverse cast members, but [to be given] an opportunity to live out a dream that’s ultimately controlled by others. We sit at home and we look at Survivor season after season, and then you actually have to put an application in, and then you actually have to be selected and go through a process. I’m honored to be able to not just to represent myself, but my family and my friends and the people in the community I work in, the cybersecurity community. It’s a great opportunity that I’m humbled by. It was surreal to see myself on TV and be a part of this franchise and doing this. And on the other end, I just greatly enjoy the opportunity to go out there and be Beast Mode. Just get it.

Us: So I’m assuming you’d love to play again?

EA: So this is what happens. That was my prequel. You know, they are doing prequels now, before everything else happens. That was mine. They wanted to show you a snippet of Abraham before they brought him back for the next show. So y’all saw me, y’all saw the physicality, y’all saw me out there working hard in the camp. Everybody’s going to see what I brought to the table. And y’all gonna be like, “When they bring that next show out, who do we need to bring back?” I need y’all to all be out there [saying], “Abraham needs to come back.”

Us: You mentioned you’re a fan of the game. What did you think about it only being 26 days?

EA: You know, 26 days is really short compared to the other seasons. Doing three tribes versus two tribes, and you’re trying to quantify, calculate, strategize, and it’s fast. It is a fast thing, considering that you prepared for something different because you saw something different. I think as a fan of Survivor, to see it differently was great. Now, to actually be on the cast and be subjected to it, no. Not at all (laughs).

Us: How about the no rice situation?

EA: I didn’t see any of it and I was hungry. I was looking forward to rice. I hadn’t mentally prepared myself for rice, at a minimum, as one of our food sources. And to be told that, “Hey, we’re not going to give you anything.” And now you’re like, “Wait a minute. I understand we can eat coconut and everything else, but still can I start with some rice?” That was a physical challenge for us and a mental challenge, because now you’ve changed the game that we prepared for off of previous seasons. So we knew at a minimum, we were going to get rice, and it was like, “Nope, no rice. Hold up, coconut? I’m not a small dude. I’m not a big dude, but I’m going to need more than just coconut.” 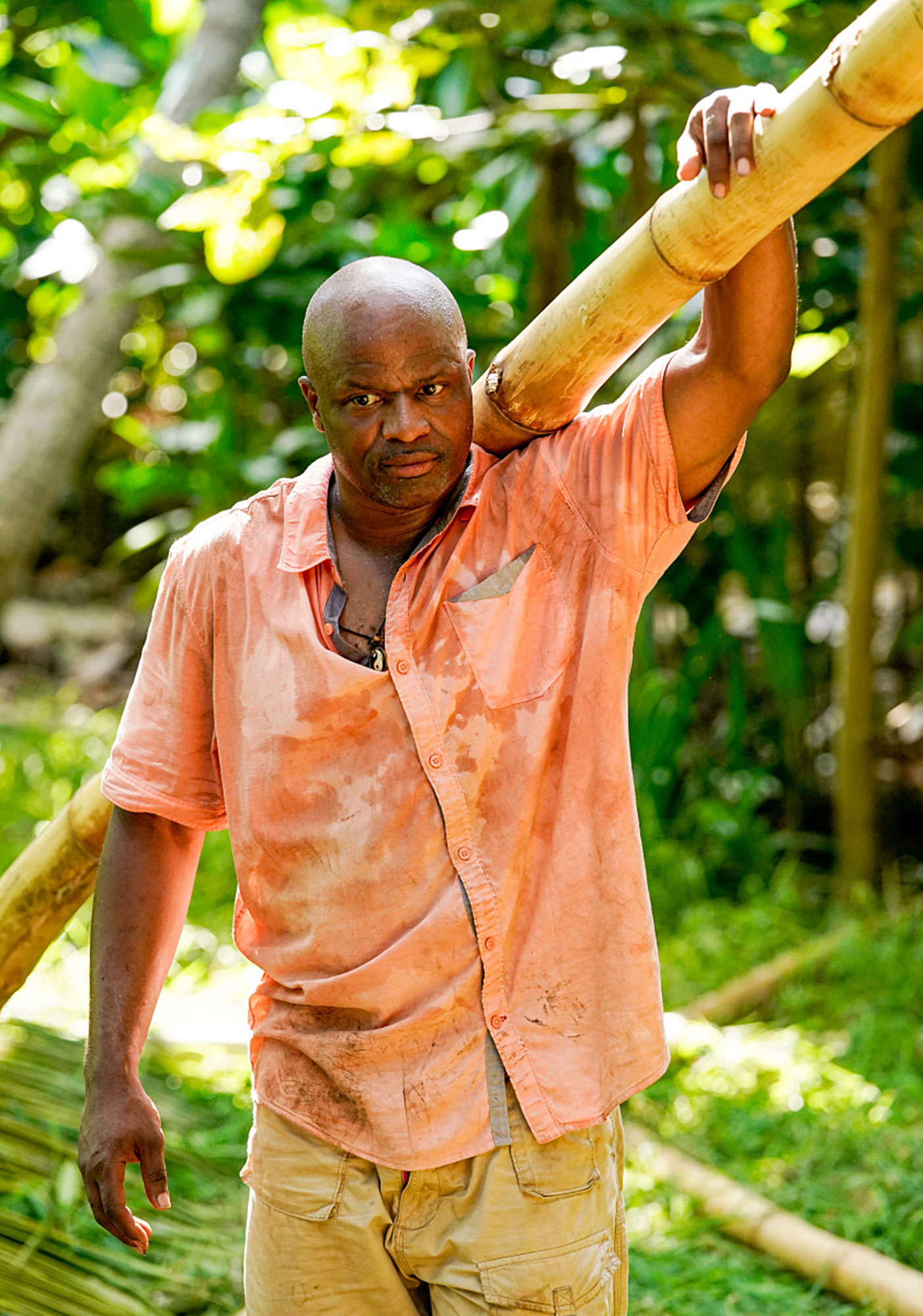 Us: Even though you went home early, did Survivor live up to the experience that you wanted?

EA: Unfortunately, the audience won’t see our whole entire time that we’re there. Being on Survivor in itself, lived up to any expectation of a dream that I had. When I got selected, I was like, “I’m a winner.” I got selected to be on a show that, yeah, I put in the application, but they’ll never gonna never call me. And they called. And to be with that cast at this time in our history and society, I feel privileged and I’ll always be a part of this. So thanks Survivor [and] CBS for selecting me to be a part of it.

Us: Do you think there was anything you could’ve done at tribal council to stay in the game or do you think your fate was already decided at that point?

EA: You know, your fate is always going to be decided, but I think I should have [thrown] Tiffany under the bus some more. I wasn’t driving the bus fast enough. She was driving the bus faster. I could have said, “Hey, here’s a reason why Tiffany is not going to be a good fit going forward.” But I mean, that’s second guessing yourself. You think you’re doing what’s right as the show goes on. You just kind of live with the consequences, which brings me to today.