Businesses and universities in Sydney and Melbourne will reap the economic benefits of the first wave of skilled workers and international students allowed into the country when border restrictions on several types of visa holders lift in a week.

In a move that heralds the end of “Fortress Australia”, about 160,000 international students and 50,000 skilled workers, as well as people on working holiday, refugee, humanitarian and certain family visas, will be permitted to enter from December 1 without a travel exemption, provided they are fully vaccinated. 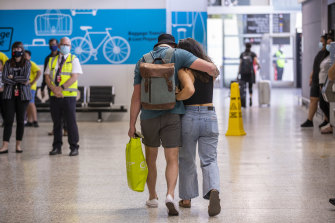 International students and other vaccinated visa holders can prepare to return to Australia without quarantine.Credit:Wayne Taylor

But overseas arrivals will be required to abide by the fragmented quarantine requirements enforced across most states and territories.

Australian Chamber of Commerce and Industry chief executive Andrew McKellar said the approach taken by NSW and Victoria, which along with the ACT have abolished arrival caps and quarantine for vaccinated travellers, would pressure other jurisdictions to follow suit.

“In the near term, obviously, this will be an advantage for both NSW and Victoria. They can start to address critical areas of skill shortage, they can start to get enrolled students back into courses,” Mr McKellar said.

Innes Willox, chief executive of national employer association Ai Group, said the state-based inconsistencies would hamper Australia’s reopening, when many other countries had already opened up.

“Such state-based international border rules will remain as disincentives to fully vaccinated travellers and will vastly reduce the economic benefits skilled migrants and foreign students bring to Australia. This is all the more pressing because of the extent of current skill shortages,” Mr Willox said.

Announcing the changes on Monday as a “major milestone in our pathway back”, Prime Minister Scott Morrison said the government anticipated about 200,000 visa holders would be able to travel to Australia, although the timing might depend on flight availability.

He said the development could happen because 85 per cent of the country’s population aged over 16 was fully vaccinated.

The reopening comes as the number of Australians seeking government assistance to get home has declined. A DFAT spokesperson around 7500 were registered as needing help to return, down from more than 40,000 earlier this year, with the decline attributed in part to more commercial flights.

Western Australia has maintained one of the country’s hardest borders and has set a 90 per cent vaccination rate before restrictions on international and domestic travel will be lifted, expected in late January or February. South Australia will open its borders to vaccinated visitors from NSW, Victoria and the ACT from Tuesday, after months of closure.

Queensland could reopen its interstate borders as early as December 6, but has previously flagged its intention to require international students to quarantine at the state’s Wellcamp facility being built outside Toowoomba.

The December 1 changes do not extend to tourists wanting to visit Australia unless they are from Singapore, Japan, Korea and New Zealand, which have established travel bubbles with Australia. The first flights of Singaporean tourists, students and relatives of Australian residents and citizens arrived in Sydney and Melbourne on Sunday.

Australian Tourism Export Council managing director Peter Shelley said NSW and Victoria stood to reap a “big advantage” from the initial reopening, but the broader tourism sector would need the return of key markets such as the United States, United Kingdom, Europe and China to recover.

“The sooner these markets come back, the sooner we can develop momentum and build this industry back,” he said.

Australia’s universities, which are reliant on international students for a chunk of their funding, and farms that use backpacker labour for their harvests have been desperate for the return of migrants and travellers.

Universities Australia chief executive Catriona Jackson welcomed the announcement as “great news” for about 160,000 students locked out during the more than 18-month long international border closure.

“They want nothing more than to re-join their classmates in Australia,” she said. “We look forward to further detail so we can work quickly to get students back for first semester next year.”

But International Education Association of Australia chief executive Phil Honeywood said the different quarantine arrangements for each state and territory were a “dog’s breakfast” for students planning their return.

The NSW Vice-Chancellors’ Committee, the peak body for universities in NSW and the ACT, said it intended to proceed with its pilot program to charter flights of 250 students a fortnight, with the first planeloads scheduled for December 6 and December 24.

“We expect that there may be some shortage in seat availability as Australia opens up, therefore necessitating the continuation of the pilot plan for the time being,” committee convenor Professor Barney Glover said.

Victoria also has a pilot program for international students, with its first charter flight to arrive on December 23 and five flights planned for January.