Get ready for even more Higgins in ‘Ted Lasso’ season 2. HL got EXCLUSIVE scoop from Jeremy Swift about Higgins’ new role at Richmond, his ‘big decisions,’ and more.

The Richmond crew is back and better than ever when Ted Lasso returns for season 2 on July 23. HollywoodLife spoke EXCLUSIVELY with Jeremy Swift, a.k.a. Higgins, about what to expect from the lovable and hilarious character in the episodes ahead. “He’s settled down a little bit more in season 2 because he’s now been given this mantle of authority a little bit and a more managerial role. I think he’s kind of the Higgins he’s always wanted to be but was never allowed to be,” Jeremy told HollywoodLife.

Higgins gets right to work when season 2 begins, Jeremy revealed. “He gets involved in some quite big decisions and he instigates bringing on a sports therapist,” Jeremy teased. “He gets an unpopular player back to the team, so he’s a little more stable but hopefully still quite silly and certainly, for a while, a man without an office.”

The first season of Ted Lasso was a bright star in an otherwise dark year (ahem, 2020). The Apple TV+ series became instantly beloved among fans and critics. Ted Lasso received 20 Emmy nominations this year, including one for Jeremy for Outstanding Supporting Actor.

Almost the entire cast was nominated for an Emmy. Given this incredible ensemble cast, it’s no surprise that the show is mixing things up in the second season. “There’s lots of dynamic changes, which is really refreshing,” Jeremy revealed. “There’s different pairings with different characters. I got to do some scenes with people I’d never done any scenes with in the first season. It’s great.” 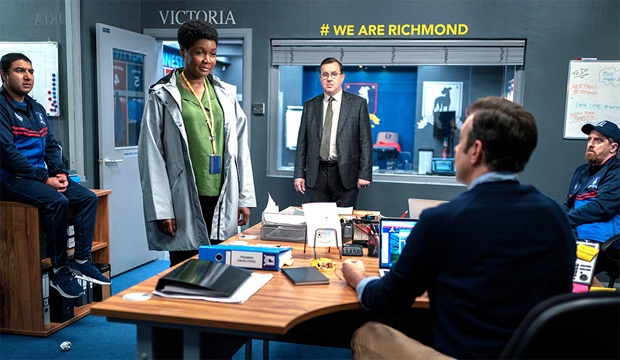 As for whether or not that goatee will make a comeback in season 2, Jeremy is setting the record straight. “I have to say it won’t. Unless they put one on in post-production. Maybe one day, maybe third season, it’ll happen again,” Jeremy said. New episodes of Ted Lasso will drop Fridays on Apple TV+.