His feet planted on the ground in blocky black shoes, his eyes near-closed and brow furrowed, Christian Li bends and sways as he conjures music, his violin soaring above the Melbourne Symphony Orchestra to fill Hamer Hall to the brim.

As he drives to the furious crescendo of Tchaikovsky’s Violin Concerto, fingers flying over the violin’s neck, bow sawing and dancing, it seems impossible to reconcile the 14-year-old’s slight figure with the muscular, grown-up, utterly confident sound. 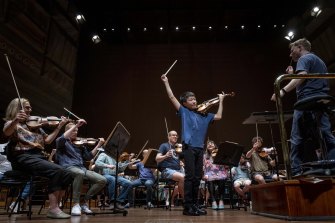 As the last note rings out, behind Li an MSO violin player is beaming with sheer joy. And when silence falls, it is immediately banished by a spontaneous, heartfelt round of applause from every orchestra member: clapping and stamping.

“Grammy Award coming your way,” conductor Ben Northey says drily, as he turns his score back a few pages. “You’re a champion.”

This is a rehearsal for the MSO’s Classical Hits concert at the Sidney Myer Music Bowl next week, and there is fine-tuning to be done. Northey lowers his stand so Li can peer at the dense notation – not that he really needs to. Li can summon every bar of the piece from memory at will, however this will be the first time he’s played it in public.

But please, don’t call him a prodigy: though the title might seem to fit the Melbourne-born boy who picked up a violin aged five, who was 10 when he became the youngest winner of the Menuhin Competition in Geneva, who last year became the youngest violinist to professionally record (as well as conduct) Vivaldi’s Four Seasons, and whose performance of Summer chalked up 1.9 million views on YouTube and rapturous praise from the uninitiated and cognoscenti.

“I never considered myself as a prodigy before, it’s a term given to someone like Mozart, or Mendelssohn,” says Li after the rehearsal. “I don’t like it very much. It just gives me more pressure because people expect a lot from me.”

Instead, he just wants to grow up to be considered “a mature musician”.

Without his instrument, Li comes across as a grounded, friendly boy – who lights up when he talks about music. Some performers live for the audience, some for the art; Li says “definitely both, maybe more to the music”.

There is a vital connection to concertgoers, he says. “I can feel their expressions, and how they feel when I play, I can feel the energy and the excitement – and a little bit of the heat.” 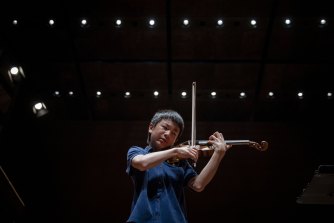 But there’s been little heat in the past two years. Just as his star was rising, the firmament went into lockdown. In a way, he says, it has given him time to take “one big breath”. Though he’s had many performances and music festival appearances cancelled or rescheduled, there has been opportunity in live music’s pause.

“When I have lots of performances and I tour around the world, I can only practise a little bit, only on the pieces that I need to perform,” Li says. He’s taken this time to expand his repertoire, learn and explore new music and the history and great figures of the classical canon.

And there’s been time, too, to concentrate on the little things: “the exercises and scales to improve myself”. He’s been working on varying his vibrato (the pulsating sound made by wiggling a finger on the string), and on his “facility”, the sheer speed and accuracy of finger movement that will enable him to master the hardest pieces (such as a Paganini violin concerto with fast passages and big jumps and stretches that challenge even the best players). The online lessons were tough at first, he says, but he got used to it.

And now he’s back, and he can’t wait to play at the Bowl, in front of an orchestra: its big, powerful, dramatic sound is uplifting, Li says.

“This Tchaikovsky violin concerto is probably my favourite concerto so far,” he adds. “It has very passionate and very fiery and beautiful melodies. It’s really exciting to be playing it for the first time.”

Classical Hits at the Bowl is on Monday 6 and Tuesday 7 December, 7.30pm.