Some things in Hollywood are certain. Meryl Streep will keep winning Oscars and there will never be an end to attempts to revive the Terminator franchise. 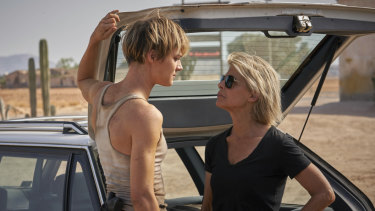 The profit motive aside, the justification for this lies in the enduring power of the core components of James Cameron’s 1984 sci-fi thriller: the killer cyborg from the future, the averted yet forever looming apocalypse, and catchphrases such as the prescient “I’ll be back". These lend themselves to endless rearrangement, as if the right combination might unlock something brand new.

Directed by Deadpool’s Tim Miller, Terminator: Dark Fate is the sixth big-screen instalment of the saga, but the first since 1991’s Terminator 2 to have Cameron on board. He serves as a producer and co-author of the story, which has been fleshed out by a largish team of credited screenwriters (all, as it happens, men).

Ignoring the later series instalments, the film opens in the 1990s roughly where Terminator 2 left off, briskly disposing of the troublesome figure of messiah-to-be John Connor (“played” by a digital re-creation of the 12-year-old Edward Furlong, who originated the role).

The scene then shifts to present-day Mexico, where yet another version of the stock Terminator narrative starts to play out. Unassuming factory worker Dani Ramos (Natalia Reyes) is the victim marked for death by a shape-shifting liquid-metal cyborg, most frequently seen in the form of Gabriel Luna from Agents of S.H.I.E.L.D., wearing an intently blank, faintly baffled look.

Dani’s protector is Grace (Mackenzie Davis), a technologically augmented soldier who, like Luna's Terminator, has been dispatched from the future to fulfil her mission. The game is on, building to a highway chase that pays tribute to a similar scene in Terminator 2 while suggesting (as did the recent Hobbes and Shaw) that today’s action filmmakers are starting to learn the lessons of Mad Max: Fury Road.

The film’s ace card is the return of Linda Hamilton as Sarah Connor, the heroine of the first two Terminator films, who offscreen has been trapped in her own kind of time loop, battling one Terminator after another and evolving into a grizzled, gravel-voiced maverick apparently wanted in all 50 US states. That Hamilton has kept a low profile in recent times gives an edge to her performance, which suggests that she, like her character, feels no need to ingratiate herself with anybody.

In the film’s first act, enough is left unexplained to induce an enjoyable kind of vertigo, especially as the time travel premise leaves ample scope for the narrative to double back on itself or switch paths. As it turns out, though, Dark Fate is considerably more linear than the last instalment of the saga, 2015’s convoluted Terminator: Genisys.

We continue to follow the central trio on the run as they reveal their backstories to each other in between skirmishes and form a bickering surrogate family (though the plot excludes romance of any kind, the lesbian vibes are as strong as in any pop fantasy this side of Xena: Warrior Princess).

Not until halfway through do we get the inevitable return of the original Terminator, Arnold Schwarzenegger, who has played a couple of different Terminators over the years and assumes yet another guise here. In his recent, sporadic film roles, Schwarzenegger has seemed a faded figure, one more celebrity has-been. But here he rises to the occasion, delivering effective moments of comedy and drama in a manner that could almost be called acting.

It’s the mixture as before and yet it isn’t. The opportunities to bring the premise up-to-date have not been missed — in the lengthy detour that traps the protagonists in a detention centre on the US border and in the allusions to omnipresent electronic surveillance, suggesting that the machines have already taken over.

One especially sinister sequence shows the aftermath of a massacre in a data centre, where corpses lie in darkness while monitors glow with life, and the evil Terminator has hooked himself up to the mainframe, letting information flow into him as if this were a source of energy in itself.