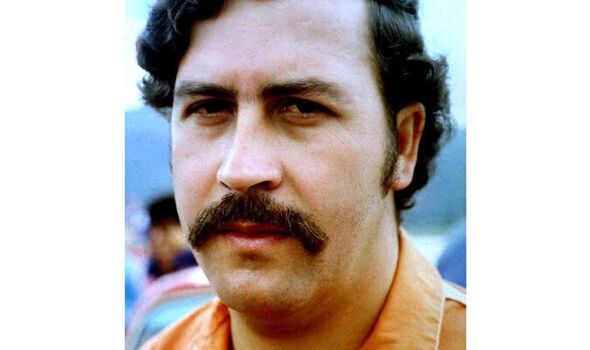 Dave recalls the conversation was very short. Jorge told him: “David, bring me back Escobar’s head and I’ll give you a million dollars.” Dave did not take long to say yes, and he knew exactly the man to be his tactical commander on such a high-risk mission: his old friend and colleague Peter McAleese.

Dave arranged to meet Peter at a Hereford pub and made him the offer he couldn’t refuse.

A former SAS soldier-turned mercenary who had operated in Angola, South Africa and Rhodesia, Peter had the right credentials to lead this mission.

Speaking from his home in Birmingham, Peter recalls: “I could not resist the challenge. You don’t get asked to kill Escobar unless you’ve got the right experience.”

And Escobar could not have been a tougher target. Exceedingly well protected he employed 80 guards at any one time, spending £1million a month on personal security.

In addition, the drug boss’s henchmen were highly committed.

“El Nangas”, who worked for the Medellin cartel between 1989 and 1993, remembers: “We were willing to give our lives for Pablo. For us at that time, Pablo was a god.”

Escobar had built up an estimated $30billion fortune ($70billion today). The richest criminal in history, he even had his own private fleet of submarines to transport drugs from Colombia to the US.

Steve Murphy, who worked for the US Drug Enforcement Agency between 1987 and 2013, says: “He was the largest cocaine manufacturer and distributor ever, responsible for as much as 80 per cent of the cocaine in the world.”

Escobar was also known for his absurd extravagance. Hacienda Napoles, his opulent jungle finca in rural Antioquia, was his pride and joy. A well-stocked zoo on its 10,000 acres included elephants, giraffes and, famously, hippos (which ran amok in the area after the drug kingpin’s death). The hideaway also had its own airstrip and a museum boasting Al Capone’s car.

Escobar was extremely popular in Medellin, the second-largest city in Colombia. “He had this mystique because he was a real Robin Hood figure,” says David Whitney, the director of Killing Escobar.

“When I was filming I couldn’t believe there were still people talking about him with great reverence, because he put so much money into the shanty towns in Medellin.”

The drug lord’s obscene wealth meant he was able to bribe authorities and remain untouchable.

“Neither the Colombian police nor the army could get Escobar,” David continues.

“US special forces were in the country, but for years Escobar stayed on the run. It was an extraordinary story, the likes of which we’ll probably never see again.”

Yet despite his local reputation, Escobar, who met a bloody end when he was shot dead by Colombian police in 1993, had killed hundreds of blameless civilians.

So as Peter gathered a squad of 12 hardened mercenaries for the mission, he had few qualms.

“Escobar was a terrible man who’d caused so much damage so the mission appealed from that point of view. I knew he had murdered a lot of people. I thought it was a great challenge.”

Peter also enjoyed the tacit support of the DEA, which was offering a huge bounty for Escobar. They knew about the mercenaries’ mission and were happy to let it go ahead.

Peter continues: “The morals of killing Escobar? I didn’t have any conscience about it. How can you have morals when the American government has a million dollars on his head?”

“Think about the heartache he caused to the families of the people he killed.”

David adds: “Figures like Bin Laden, for example, or maybe Putin – some would consider that they need to be taken out.

“As Winston Churchill once said, ‘We sleep safely at night because rough men stand ready to visit violence on those who would harm us’.

“Escobar was a mass murderer and a lot of people wanted him dead. Who are you going to call to do that? Men like Peter and Dave.

“There is a moral argument sometimes for certain actions.

“Whether this is one is up for debate. But I admire Peter for having the guts to take it on.

“The film is not a defence of mercenaries. Some have done some terrible things and should be punished for them. But it’s a grey area.

“What would you think about somebody going over to fight for Ukraine at the moment? We’re just trying to tell a story and the viewer can make their own mind up.”

The film reveals that Peter’s character was moulded by a tough upbringing in Glasgow.

His violent father would frequently beat him up and once broke his nose in a fight. Peter followed in his father’s footsteps, serving time for assaulting a girlfriend.

Now 80, Peter confesses that his brutal behaviour contributed to the breakdown of his marriage, and mockingly refers to himself as: “A dirty, lowdown scumbag of a man.”

However, he proved a born leader as he took his team of mercenaries into the deepest Colombian jungle to train for 11 weeks.

Funded from the bottomless pockets of the Cali cartel (“Money was no object, they had billions”) the “Dirty Dozen” had enough ammunition to kill 3,000 men.

On June 3, 1989, Peter’s troupe got a message from a spy that Escobar was in residence at Hacienda Napoles. They jumped straight on to two helicopter gunships.

“We were psyched up. People talk about fear. But fear was out of the question. We had conquered it.”

Because the Colombian military radar operators were on Escobar’s payroll, the mercenaries’ helicopters had to fly at just 200ft.

Disaster struck as the helicopter Peter and Dave were in clipped some treetops and came crashing to the ground. The pilot was killed and Peter suffered dreadful injuries to his ribs, legs and hands.

Unable to carry Peter out of the jungle, Dave had to leave his colleague lying in agony as he went to get help.

At that moment, Peter recalls: “The Catholic prayers came out. I said, ‘Give me the strength to die with an element of honour’.

“I lay there thinking, ‘How the hell did I get myself here?'” By the third day Peter was hallucinating, but still conscious enough to realise that, “If Pablo had caught me, I would have had a terrible, long drawn-out painful death.”

But Dave sent two men back to rescue him. They strapped him to a log and took eight hours to bring him to safety.

Peter says: “I felt the pain was killing me.” To this day, he is in constant pain from his injuries.

On the way down the mountain, Peter had an epiphany.

He says: “There was a dark side to my character, but I felt an awful lot of anger subsiding.”

On his return from Colombia Peter never returned to the front line. But in 1991 Dave embarked on another attempt to kill Escobar.

It did not end well. He was arrested by the US authorities for attempting to import a fighter jet into Colombia and sentenced to three years in a Florida prison.

By contrast, Peter saw the light and is now a changed man. David reflects: “The catharsis of what happened to Peter on that mountain gradually helped him come to terms with his life, and he’s a much more peaceful guy now.”

“If I hadn’t been through all those things in life – the fights, the crashes in helicopters, the break-up of my marriage – I wouldn’t be where I am today. It’s like everything burned out.

“There was nothing left, except to live a good, spiritual life. I learnt a lot on the side of the Andes. It was the beginning of me growing up.” Killing Escobar, PBS America, 9.05pm tonight