The Battle in Hastings! Friendship on the brink

Man whose home was piled high with clutter tests his friend’s patience by refusing to throw away rubber bands, biscuit tins and empty washing up liquid bottles on Nick Knowles’ Big House Clearout

A man pushed his best friend and niece to breaking point on this week’s Nick Knowles’ Big House Clearout, when he refused to part with rubber bands, biscuit tins and empty washing up liquid bottles.

Presenter Nick travelled to Hastings this week to help Mike declutter his chaotic cottage, which he shares with his four rescue dogs.

Single Mike, who previously led an active lifestyle and enjoyed hiking was struck down several years ago when he developed hip problems and let clutter build up around him, admitting that he likes a ‘full house.’ 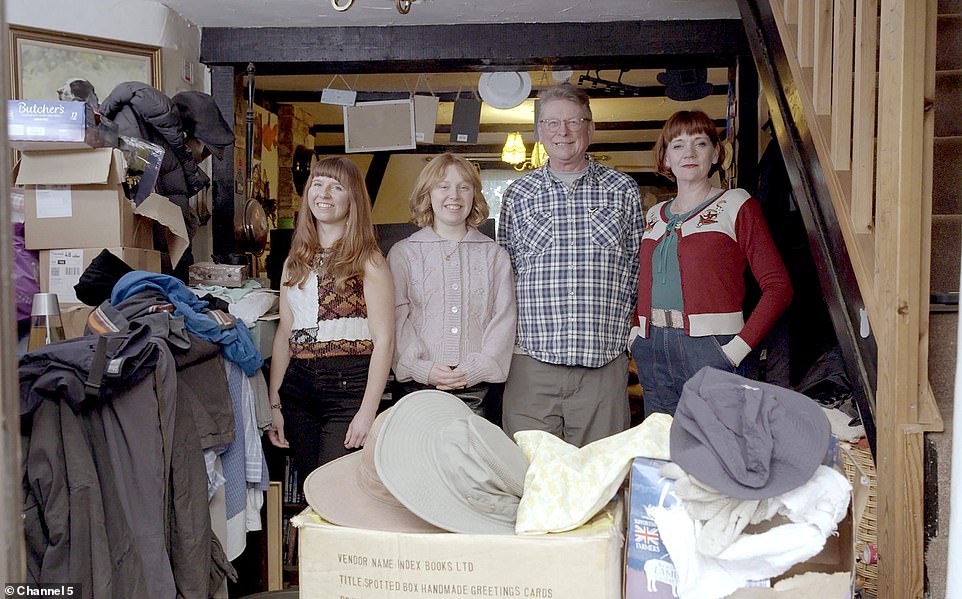 Also suffering with arthritis and frequently in pain Mike became glued to his 75 inch TV and would often sleep on the sofa that blocked the front door.

His dining room was inaccessible, piled high with his old walking gear – 16 pairs of walking boots to be precise, and the conservatory was a dog’s dinner, literally with the door scratched to shreds.

His outdated Thomas The Tank Engine-esque spare room meant that his nieces Amber and Hayley were reluctant to stay or eat in the cottage and even his best friend Becky commented: ‘It’s a high stress atmosphere.’

With the support of his nieces and Becky Mike was able to strip back his belongings by 50 per cent.

However, tensions became fraught and the more Mike was pushed the more he dug his heels in. 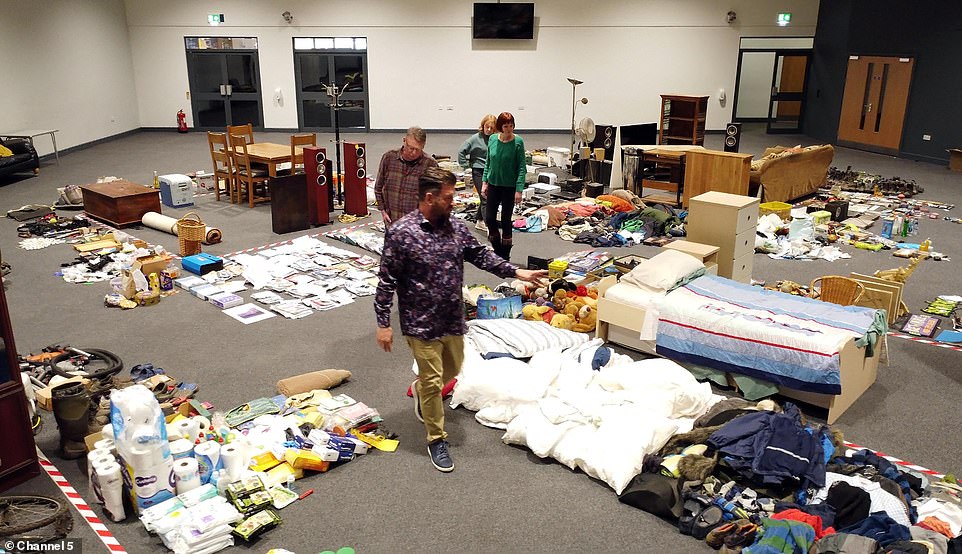 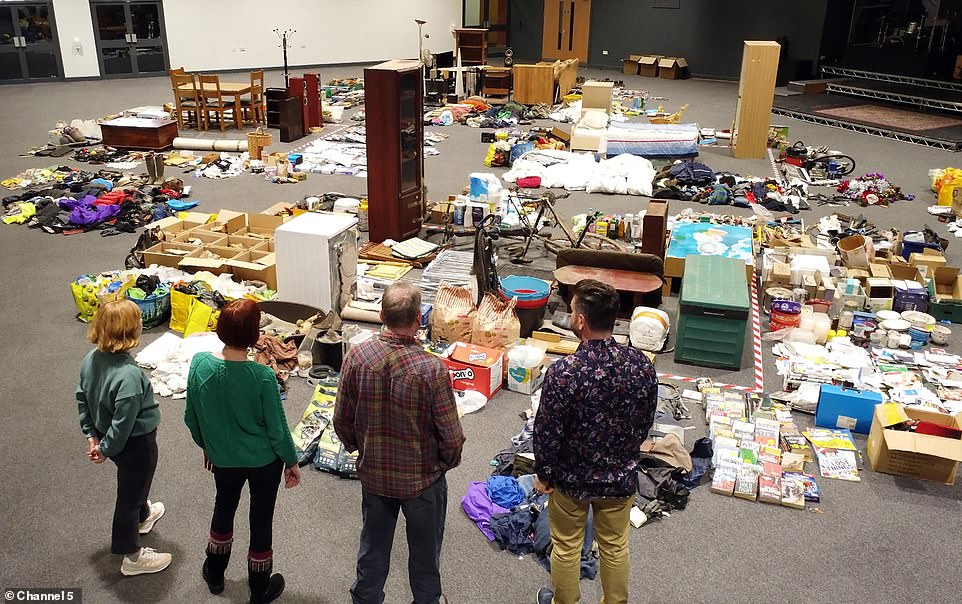 It reached breaking point when he started to sort through a pile of rubbish which Becky and Amber had already gone through.

When Amber questioned him over wanting to save an empty washing up liquid bottle he exclaimed: ‘I hate throwing good stuff today. Like, anyone who doesn’t want to do it, go away and let me do it’

It was this that forced Becky to leave the room.

She told Nick: ‘It’s frustrating. We all want the same thing. But to go through a big pile of rubbish that we’ve already sorted through is soul destroying.

‘I am here and I do want to help but I can’t watch that, it’s too emotionally draining. If I didn’t care it wouldn’t bother me so much.’ 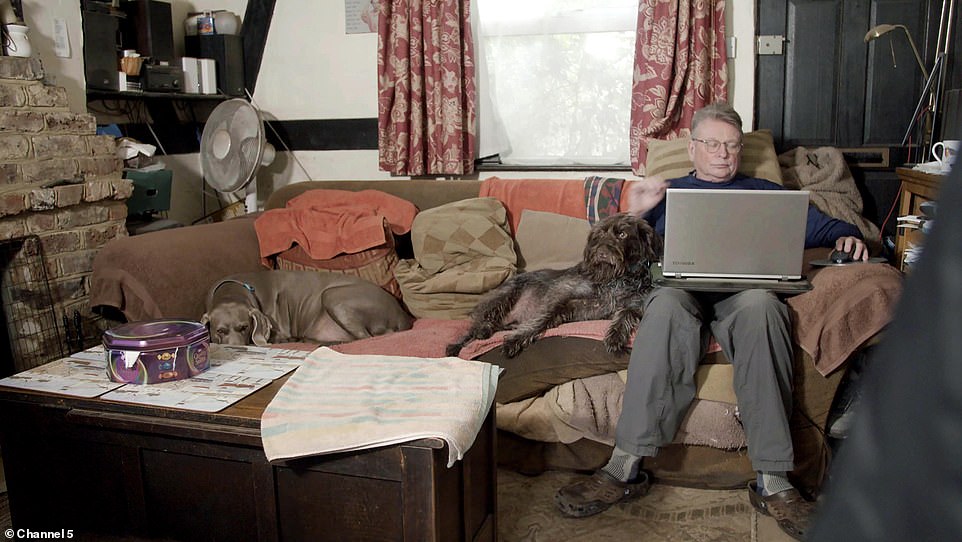 Mike, lives in Hasting with his four rescue dogs. He used to be a keen hiker until he began suffering with hip problems several years ago and is sometimes in so much pain he can’t make it upstairs 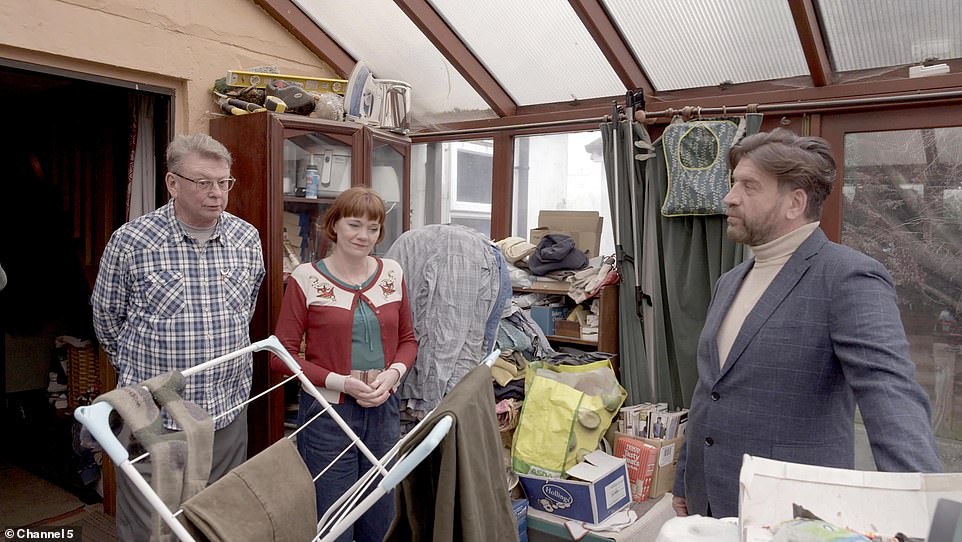 Mike’s best friend Becky (middle) was concerned and frustrated at his inability to part with anything, included empty washing up liquid bottles

Mike solemnly admitted: ‘If I lose Becky as a friend over this, it’s not worth it.’

The whole way through the sorting process, of which Nick’s team filled 133 boxes with Mike’s possessions including 13 TV remotes, 22 outdoor hats, and 34 pairs of shoes and sandals, Mike dug his heels in.

He said: ‘It becomes a matter of pride not to give in and to hold onto as much as I possibly can.’

However, in the end he did compromise and the results were astonishing – surprising even to him.

The team completely transformed his cluttered cottage into rustic bliss.

They created a storage unit underneath the stairs for Mike’s walking boots and coats, they also repurposed a bureau and built a custom media centre out of old kitchen cupboards to home his gigantic TV. 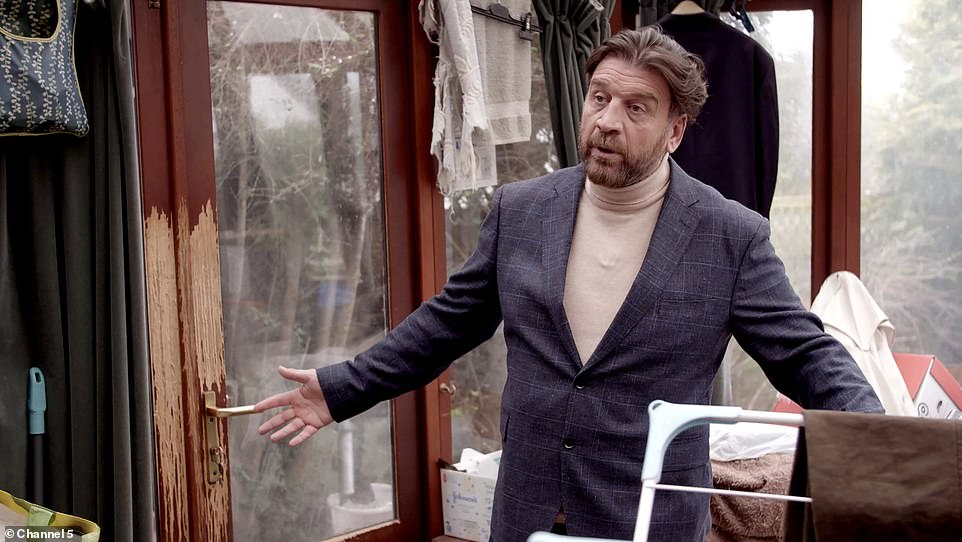 Mike was only using the living room in his cottage. The Conservatory (pictured here) was used to store clothes and give the dogs their dinner. The wood was literally scratched to shreds 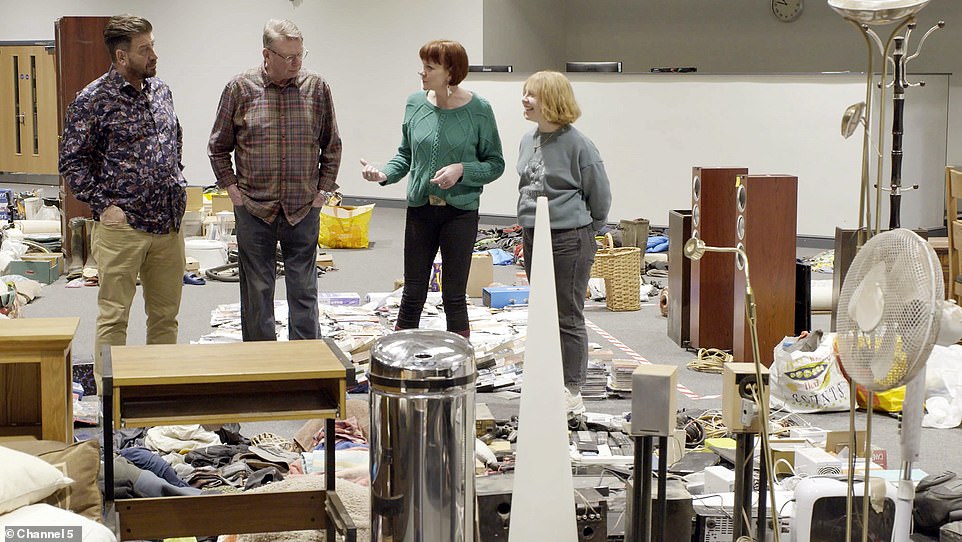 Nick’s team moved 133 boxes of Mike’s belongings to the Hastings centre, which filled the 500 seat capacity

The cottage was also animal-proofed with a synthetic carpet and metal panelling on the conservatory doors.

Much to his niece’s delight the main transformation was the spare bedroom, which was stripped of its childish wallpaper and kitted out with two single beds.

Amber said that she didn’t want to have to go home after seeing this room.

Mike described the process as: ‘This isn’t a decluttering this is a caterpillar loosing its hard shell and metamorphosing into a beautiful butterfly.’ 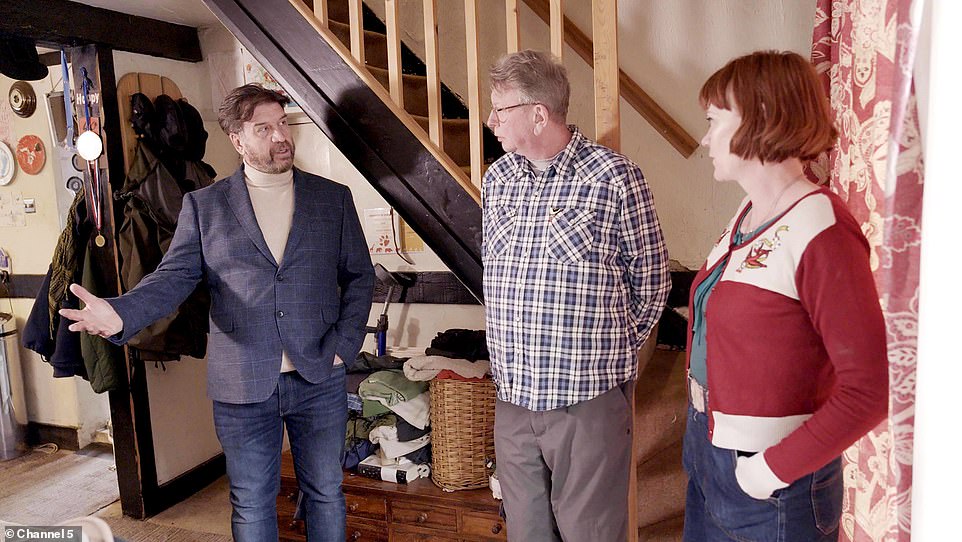 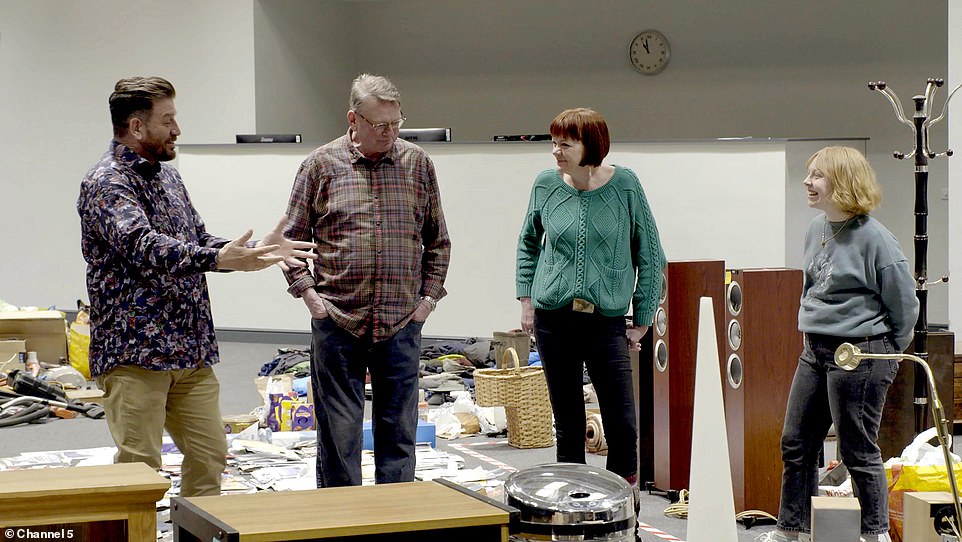 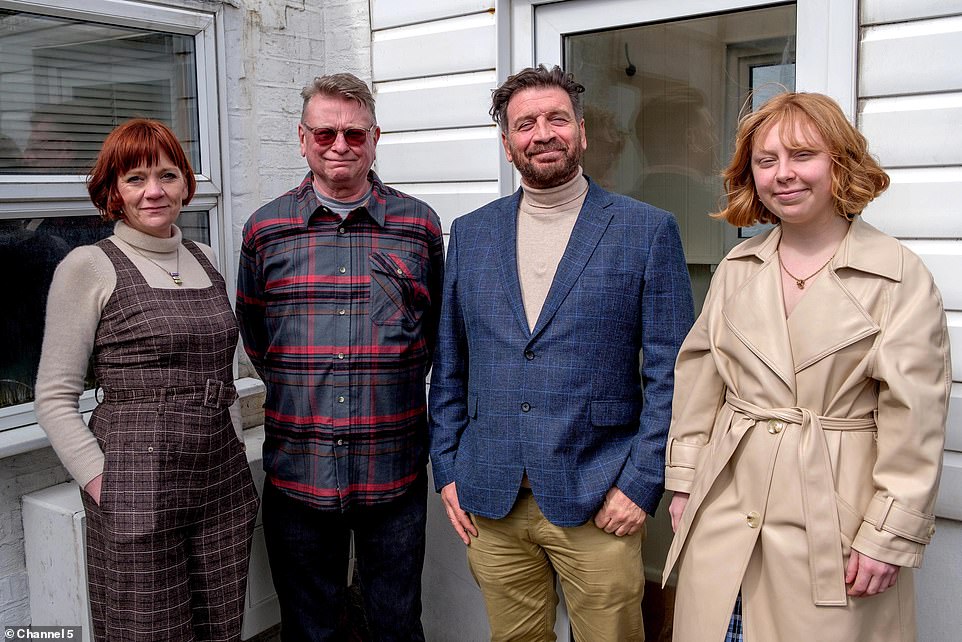 Mike was thrilled with how to the team had converted his cottage. In particular Amber was pleased with the guest bedroom, which was striped of its Thomas The Tank Engine wallpaper 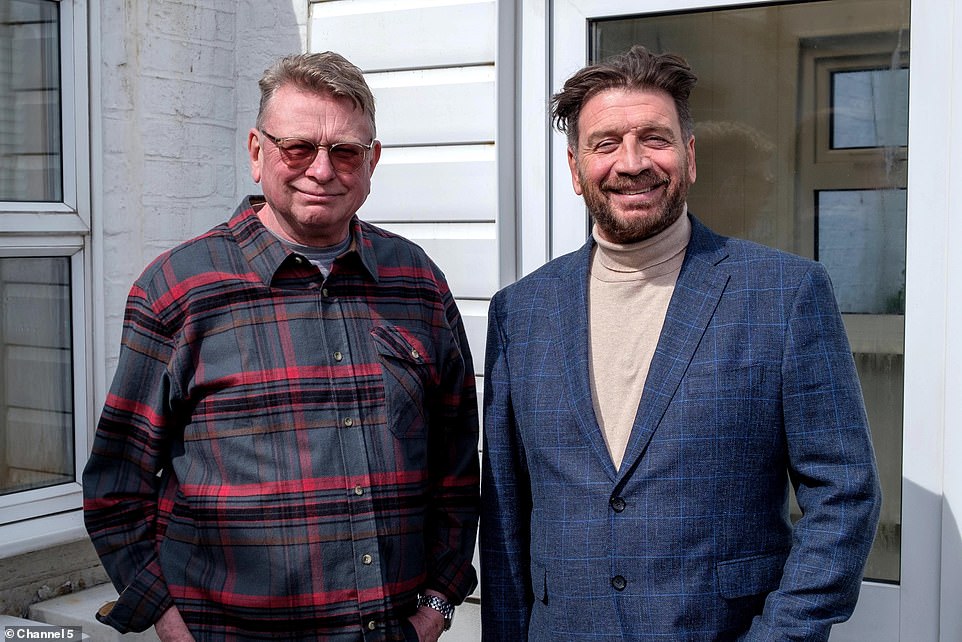