The Cure viewers brand the show a 'heartbreaking but essential watch'

The Cure viewers were left heartbroken after watching a documentary based on the inspiring real-life story of an ordinary woman who exposed one of the worst hospital care scandals in the history of the NHS.

Last night’s episode of the Channel 4 show, starring Sian Brooke and Sue Johnston, focused on Julie Bailey, whose mother Bella was admitted to Stafford Hospital with a treatable hernia condition back in 2007.

She died there, two months later, from heart problems that developed in hospital. During her stay, she was left without oxygen for 24 hours and was dropped on the ground by a healthcare assistant. After that, her health deteriorated rapidly.

Realising it wasn’t an isolated case, Julie was determined that no other patient should suffer in the same way and she launched a campaign called Cure the NHS.

But following emotional scenes in the programme, viewers took to Twitter, with many admitting they struggled to watch.

‘Only 30 minutes into #TheCure my heart is actually breaking,’ wrote one, while a second penned: ‘The Cure on channel 4 is a heartbreaking but essential watch for all involved in healthcare. This must never happen again.’ 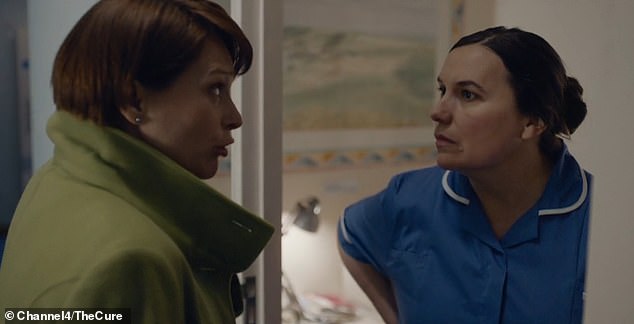 During her stay, Bella was dropped on the ground by a healthcare assistant. Pictured, Julie tried to tell a nurse that her mother wasn’t just having a ‘panic attack’ and was struggling the breathe

As the programme aired, viewers took to Twitter to express how heartbroken they were (pictured)

A third added: Catching up with #TheCure on channel 4, if this was the true extent of the #midstaffsscandal then it’s absolutely shocking and we should be appalled, its so hard to watch,’ while a fourth agreed:

‘#TheCure- story of an incredible fight by relatives which, together with HCC and its powerful report, drew the situation in Mid Staffs to national attention. Harrowing but essential viewing.’

In one hard-to-watch scene, a family member explained to the nurse: ‘That health care assistant dropped my Nan,’ to which she replied: ‘On the bed? That’s barely a bed. You slipped didn’t you.’

A worried Julie, played by Sian Brooke, then said: ‘You can hear her, she can hardly breathe,’ yet the unconcerned nurse responded: ‘Don’t work yourself into a tizzy. You’ll give yourself a panic attack.’ 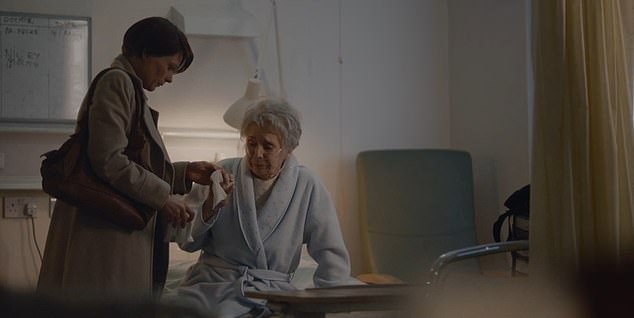 The hard-to-watch scenes left viewers across the nation in tears. Pictured, Julie, played by Sian Brooke and Bella, played by Sue Johnston

Bella went to Stafford Hospital in pain from an enlarged hernia, in September 2007. She died there, two months later, from heart problems that developed in hospital.

During her stay, she was left without oxygen for 24 hours and was dropped on the ground by a healthcare assistant. After that, her health deteriorated rapidly.

Since losing her mother, Julie has dedicated her life to campaigning for NHS reform, giving up the cafe and dog grooming business she ran, and her job in social work.

It all began with a letter, complaining to the hospital about unattended wards.

When nothing was done, Julie started a nationwide campaign group called Cure the NHS and exposed what the public inquiry in 2013 acknowledged was an absence of ‘care, compassion, humanity and leadership’ at all levels of the Mid Staffordshire Trust.

Hundreds of patients died as a result of sub-standard care between January 2005 and March 2009, the inquiry found. Patients were left in soiled bedclothes for lengthy periods; were unable to get water; and there were untrained staff on the ward.

It called for ‘a fundamental culture change’, ‘openness’ and ‘ensuring that the focus of the healthcare regulator is on policing compliance with standards’. But Julie insists that the changes haven’t happened and there is far more to be done.

Julie is calling for legislation on how many staff are needed to make a ward safe, rather than just recommendations that, she says, have been ‘watered down’.

She also campaigns to protect whistleblowers, through reform of the Public Interest Disclosure Act. And she’s convinced staff should have more say in management

Expressing their opinions on social media, one who tuned in wrote: ‘If this was the true extent of the scandal then it’s absolutely shocking. We should be appalled. It’s so hard to watch’ (pictured)

Insisting it wasn’t a panic attack, Julie’s character then marched back over to the nurse for help, but instead, she slammed a book on the desk and said: ‘Fine, look it up yourself.’

When the rest of inspirational Julie’s real-life experiences were brought to light in the show, those who tuned in had a lot to say.

‘Almost 4am and still thinking about #TheCure I think I’ve been traumatised #NHS nobody should have to die like that,’ wrote one, while a second commented:

‘A shocking and harrowing reminder of the appalling conditions which patients and families were subjected to because of systemic failings in a broken healthcare system. Sadly not everything is fixed yet.’

A third wrote: ‘If people didn’t watch #TheCure on last night. THEN DO. So timely. Our NHS is so precious & continues to need looking after. Wonderfully performed by all,’ while a fourth added:

‘I watched #TheCure last night, the drama on the Stafford Hospital scandal, and the woman behind the campaign. I cried a lot, and it felt so real; because tragically, it all was. It really is a much watch.’

Some suggested the programme should be sown to anyone involved in the healthcare profession. Pictured, Bella, played by Sue Johnston