The good, the bad, the ugly: the Archibald Prize in 10 paintings

No fewer than 816 works were entered in this year’s Archibald Prize, with 52 being selected as finalists. I should be used to it by now, but I’m still amazed that so many artists plunge in, year after year, in the forlorn hope of making it into the charmed circle that hangs at the Art Gallery of NSW. There is a small, informal club that seems to be included almost every time, but for most entrants it’s a lottery.

Clearly, the Archibald Prize speaks to artists and the public in a way no other art competition can match. This popularity could never be attributed to outstanding quality and can’t be explained by the annual media blitz. There is something about the prize that genuinely touches the public imagination. It may be the romantic idea of an unknown artist achieving instant fame, or the feelgood notion of a show that unites the many diverse strands of the Australian population in one democratic event.

This year I’ve decided to pursue the democratic angle by looking in detail at 10 entries. To cover the broadest area, I’ve eliminated paintings (and issues) that have been discussed in previous articles, notably Blak Douglas’s winning portrait of Karla Dickens; the self-portrait of former refugee, Mostafa Azimitabar; Richard Lewer’s Liz Laverty, which remains a personal favourite; and Natasha Walsh’s very clever, Dear Brett (the blue room).

After that it was almost a toss-up as to what to discuss, with 2-3 contenders for each category. No apologies, no regrets. 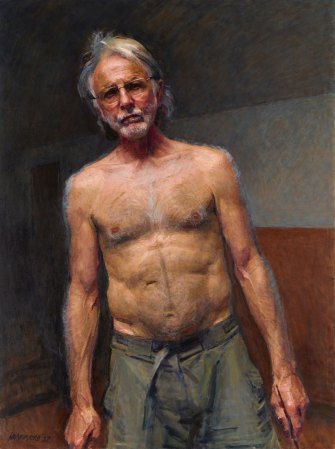 There is a strong bloc of so-called traditional portraits in this year’s hang, but for sheer consistency, Robert Hannaford stands out. He has been one of Australia’s leading portraitists for decades, a finalist on 27 occasions but never a winner.

Hannaford has been used as a kind of ‘token trad’ – too good to omit, but too conventional to sway the trustees from their perennial search for novelty and controversy. His best, most personal entry came in 2007, with a self-portrait that showed his bare torso pierced by a tube after a cancer operation. This year he has revived that theme, with another hairy-chested self-portrait painted after a brain operation. Hannaford looks older and greyer, but still resolute. Technically, he’s streets ahead of most of his peers. The work is poignant and unflinchingly honest, but never for a second could I see it as a winner because such obvious qualities count for little with today’s trustees. 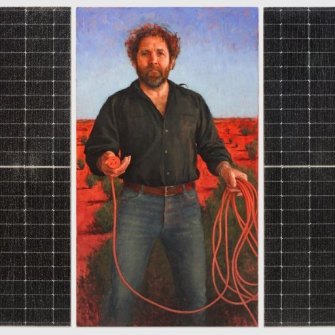 If Hannaford seems destined to always make up the numbers, Jude Rae is getting awfully close to the money. The trustees were desperate to give her the prize last year when it would have been a travesty of justice to go with anything other than Peter Wegner’s portrait of Guy Warren. In 2022, Rae is the official runner-up for the second Archibald in a row, with a portrait of renewable energy expert Dr. Saul Griffith.

Is this enthusiasm justified? There is no denying Rae’s considerable abilities as a painter, but the big solar panels attached to each side of the work are so ponderous in their gimmickry one has to make an effort to see the portrait itself, which shows Dr. Griffith holding a plug and extension cable like Elvis holds a six-shooter in the movie poster for Flaming Star, later adapted by Andy Warhol. If the judges had wanted a well-painted likeness with a hint of environmental crisis, they might just as easily have considered Yvonne East’s portrait of Lisa McCune, which depicts the actor knee-deep in water. At least East didn’t feel the need to frame the work with matching water tanks. 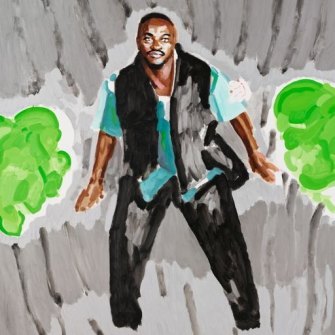 There was a time when Mathew Lynn entered the Archibald with precise, tonal portraits in the manner of Velázquez. His Jeanne Ryckmans of 1997 is the one that remains in my mind. Perhaps fearing he will be forever typecast as a trad, sharing the frustrations of Robert Hannaford and Paul Newton, Lynn has begun to reinvent himself as a much looser, more expressive painter.

The catalyst has been a growing connection with the Congolese community of Western Sydney, which has administered an electric charge to Lynn’s mojo. He now applies the paint in raw swathes of colour, adding the bare minimum of detail required for a likeness. In his portrait of Adelaide-based artist, Pierre Mukeba, that minimum is just enough. This amazingly crude picture conveys a strong sense of personality and a ferocious energy. Lynn’s new look has yet to sway the trustees, but it’s not for want of trying. 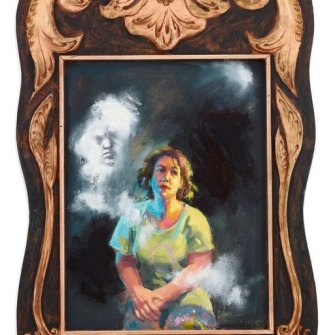 Wendy Sharpe is in the relatively comfortable position of an Archibald winner who enters the prize every year with no pressure and no great expectations. The aim, one suspects, is to take advantage of the annual media feeding frenzy to keep her work in the public eye. The same might be said for another previous winner, Lewis Miller, whose portrait of Deborah Conway is a timely reminder of his abilities.

Sharpe’s Self-portrait with ghosts has been warmly received. When images of the finalists were posted online, people started asking me: “What about Wendy Sharpe? That looks a good picture!” It wasn’t immediately obvious that the work was only 40 x 30cm, with an extravagant art nouveau frame.

The buried reference is to an aunt who was a psychic, but there are ‘ghosts’ to be found in every self-portrait. While Sharpe is one of the few artists bold enough to take on a mural-sized painting in front of an audience, she’s at her best on this smaller scale where the details are made to count. 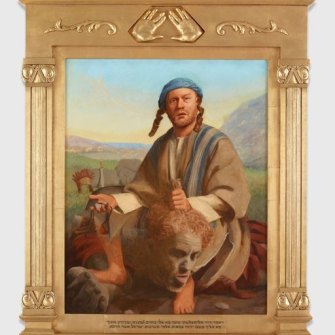 From the veteran to the newcomer. Avraham Vofsi has made a flying start to his Archibald career with a portrait of media personality John Safran as both David and Goliath. It’s a picture in which novelty is piled upon novelty, from the fancy dress rendition of Safran as the young David holding a giant-sized head that bears his own features, to a truly ridiculous golden frame that aspires to the condition of altarpiece.

It’s also the most exuberantly Jewish painting seen in the show for many a year. By placing such emphasis on this cultural niche, Vofsi may be carving himself a regular place in future Archibald competitions. He has the talent and the wit to become a fixture, but it remains to be seen whether his approach begins to look a little stagey. In the meantime, there’s no shortage of Jewish celebrities or Biblical stories to keep him busy.

Catherine McGuiness: Rosary with the seagull 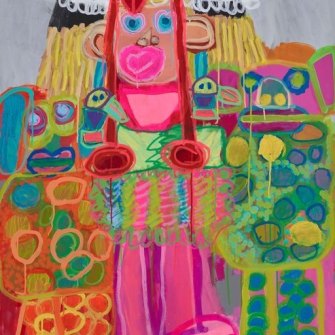 Catherine McGuiness, who is associated with the Studio A group of artists that also includes Meagan Pelham, Emily Crockford and Thom Roberts, would not likely have been a contender for the prize. The studio’s output often sends a message about social inclusiveness, and the inclusion could be seen as a marvellous gesture or a calculated ploy to demonstrate the open-minded nature of the show and its judges.

I’ll resist the more cynical option because I’ve always been fascinated by these non-professional artists who work from instinct and enthusiasm. McGuiness’ portrait of artist Rosie Deacon is a riot of colour, leaving us in no doubt as to the affection she feels for her subject. We may not recognise the face, but there’s no disguising the feeling. 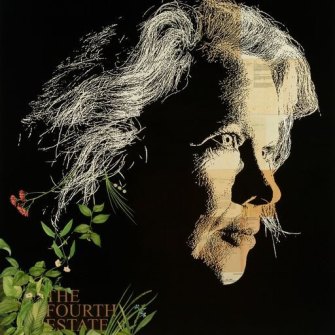 Now enjoying his eighth appearance in the Archibald Prize, James Powditch has become a familiar sight. His style, which combines elements of painting and collage, is instantly recognisable, and there is often a political aspect to his choices. He painted Albo for the 2020 Archibald and entered another version in the Doug Moran Portrait Prize. Powditch is also a bit fixated on the ABC’s 7.30 Report, having painted Kerry O’Brien, and now Laura Tingle.

In this portrait, he has softened the rather stern glare Tingle wears in front of the camera when she tells us about goings-on in Canberra. Without her glasses she stares (short-sightedly?) into the light, a bit of greenery entwining itself in her hair from the left-hand corner of the picture. The problem lies with Powditch’s habitual vices of overstatement and schematisation. We don’t need to read the words “The Fourth Estate” to know Tingle is a journalist, while the face has the chilly appearance of a photocopy. The definitive Tingle portrait is a challenge yet to be met. 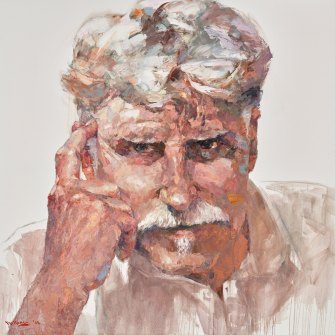 There was a time when the Archibald was chockablock with Chinese artists, but this year only Dapeng Liu and Hong Fu have made the cut. Dapeng’s portrait of Dr. John Yu is a simple, likeable painting with a touch of surrealism. Hong Fu has attempted a more complex portrait featuring last year’s Archibald winner, Peter Wegner. It’s a picture made from many small touches, utterly different from Hong Fu’s Archibald entry of 2021 – a tremendously good likeness of Mabel Lee.

Hong Fu’s vice is one most artists would willingly embrace: a self-conscious sense of mastery that enables him to switch styles almost at will. The majority of painters have a particular method they adapt to every purpose, but Hong Fu seems to delight in painting one work with near-photographic precision, another with short, expressive brushstrokes. Neither is this the limit of his virtuosity. His Wegner portrait is technically impressive, but dry and detached alongside last year’s effort. He might do well to ditch the finger-against-the-side-of-the-head pose, which is a hackneyed way of denoting a thinker. 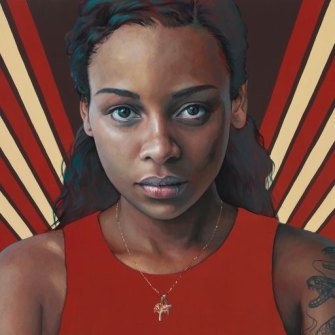 Kathrin Longhurst’s ‘origin story’ about growing up in East Germany is often used to explain her predilection for vast, overscaled heads. Each of her subjects could stare down at us from the walls of some totalitarian fortress. If they refute these associations, it’s because most of Longhurst’s sitters seem to be attractive young women, more stereotypically found in large-scale advertisements.

The subject of Irrational, Midori Goto (not the Japanese violinist!), is not easy to read. The title suggests a difficult temperament, but the face is entirely open. The stylised rays of light streaming out from behind the figure add an exaggerated dynamism to the image. As often happens with this artist’s work, there is a disjunction between the strident manner of presentation and the subtleties of character an accomplished portraitist might seek to capture. There’s a serious intent that can never quite overcome the painter’s fixation with glamour. 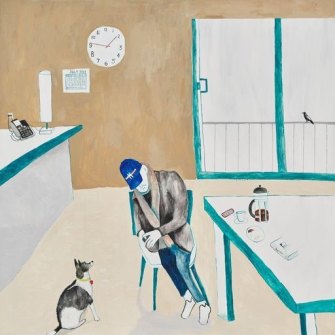 Portraits throughout the ages have been used to create falsely commanding images of quite ordinary individuals. Noel McKenna takes the opposite approach, painting an utterly offbeat portrait of the remarkable Pat Corrigan – businessman, philanthropist, art collector. No specious flattery here! Pat, in baseball cap and sneakers, has dozed off in the artist’s kitchen, under the watchful eye of McKenna’s dog, Rosie. We see only a portion of his face, as he looks likely to slide off the chair.

Each object is given generous space – a phone, a cup, a coffee pot, even a biography of Minimalist Agnes Martin, which may be taken as a comment on the minimal nature of McKenna’s furnishings. Somehow, we learn more about Pat Corrigan in this portrait than we do from many of the more formal portraits in which he’s featured in the past. In an age in which heroic postures are no longer be trusted, one doesn’t have to look Napoleonic to make a sympathetic impression.

The Archibald Prize 2022 runs at the Art Gallery of NSW until August 28.