Smooth operator! Kate Middleton’s ultra-straight hair with a ‘tuck behind the ears’ stopped strands sticking to a ‘sweaty’ face in humid Belize, expert says – after she battled the dreaded frizz on past royal tours 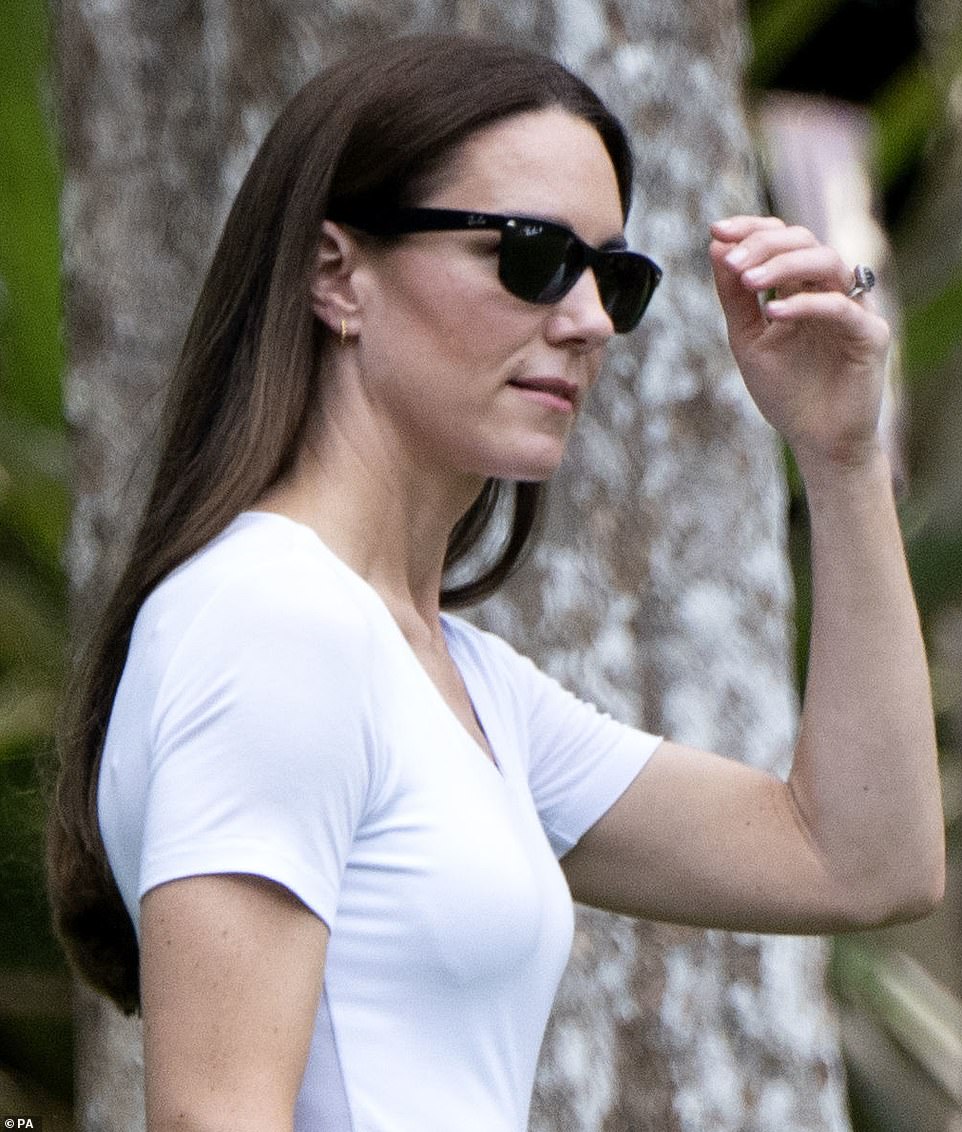 The Duchess of Cambridge delivered a masterclass in maintaining sleek, stylish hair in heat and humidity as she joined Prince William for a busy day in Belize yesterday. 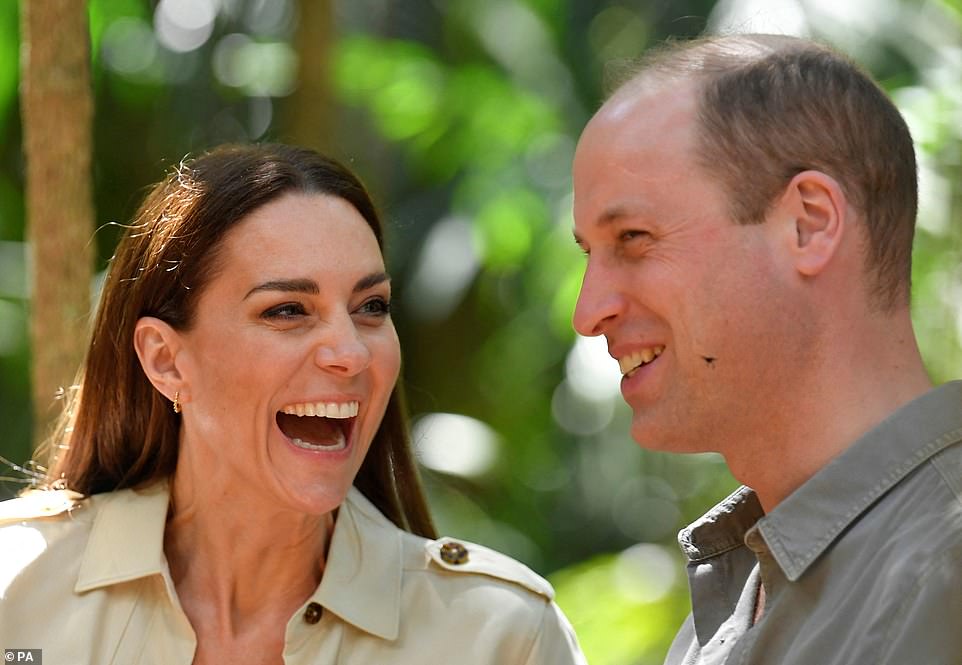 Kate, 40, kept her brunette locks straightened in a classic middle parting as she toured the ancient Mayan archaeological site of Caracol, learned survival skills in the jungle and joined William, 39, at a glitzy engagement last night. 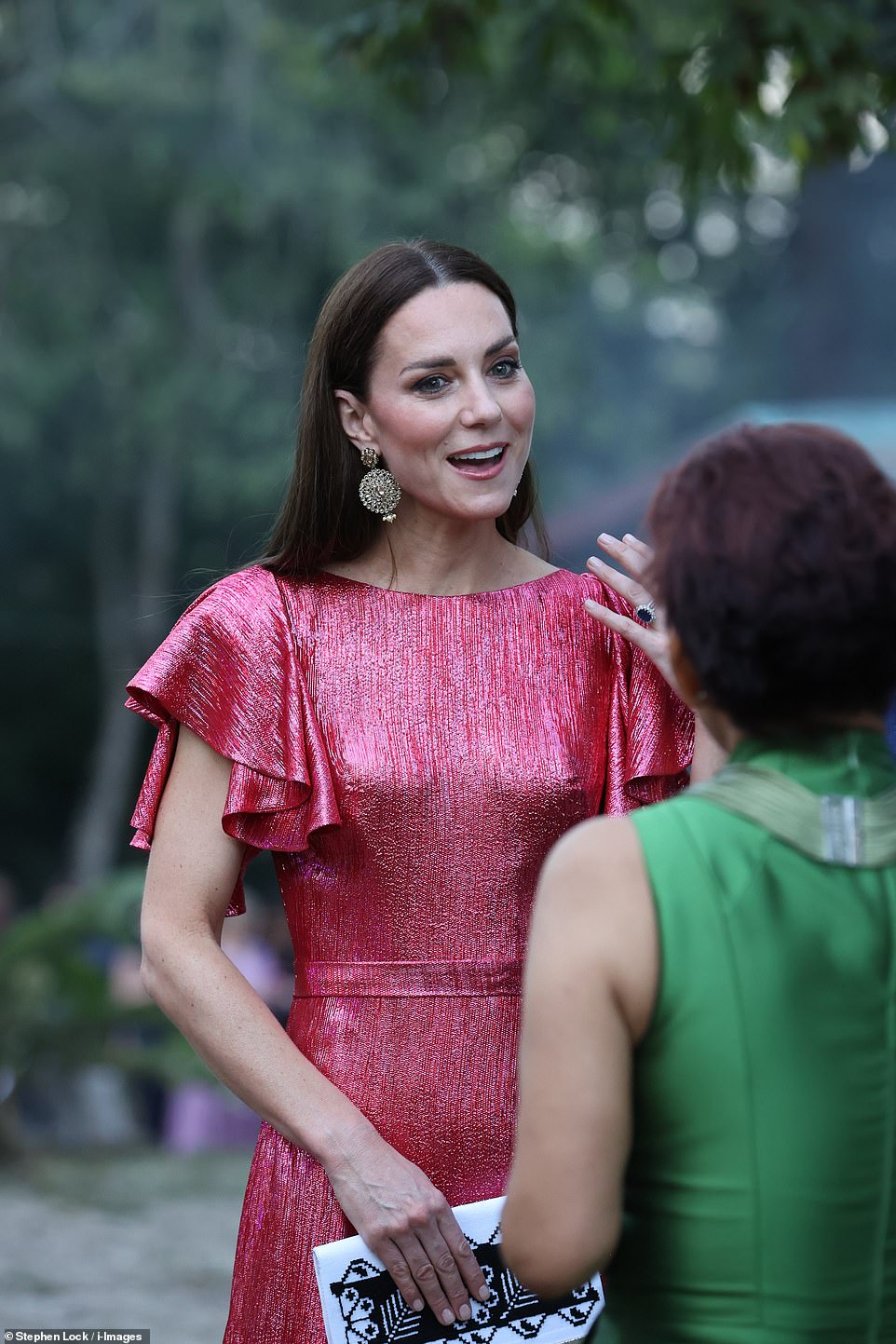 Speaking to FEMAIL, celebrity stylist Tom Smith explained the hairstyle is a clever choice for a hectic royal tour when there is lots of rushing around between engagements, particularly ones outside in a tropical environment. 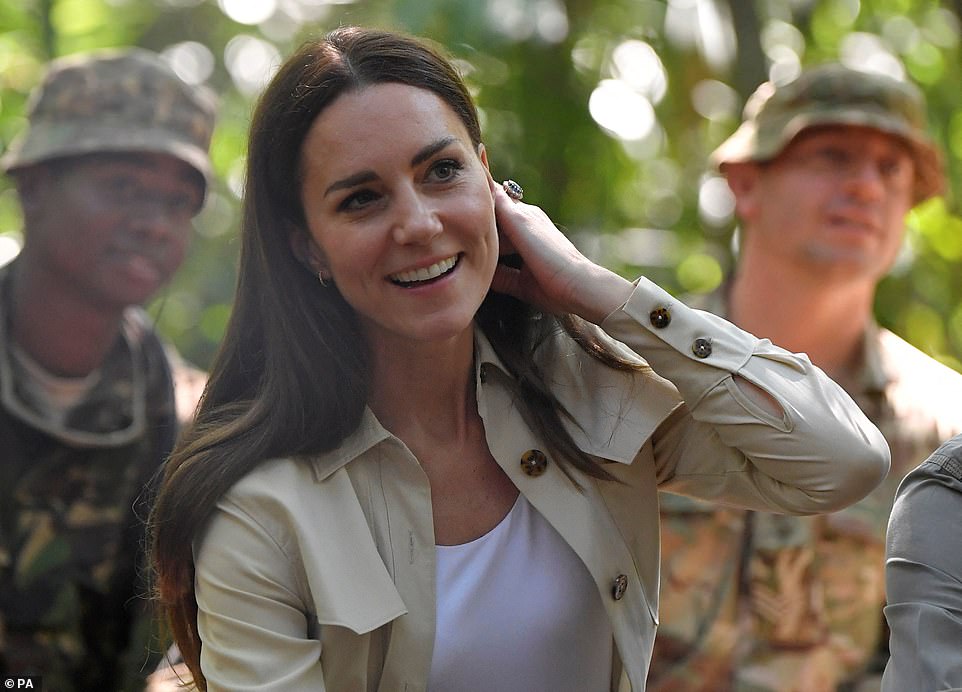 ‘Long smooth hair with a middle parting tucked behind the ears is a really good way for the hair to look tidy, tailored and polished,’ he said. 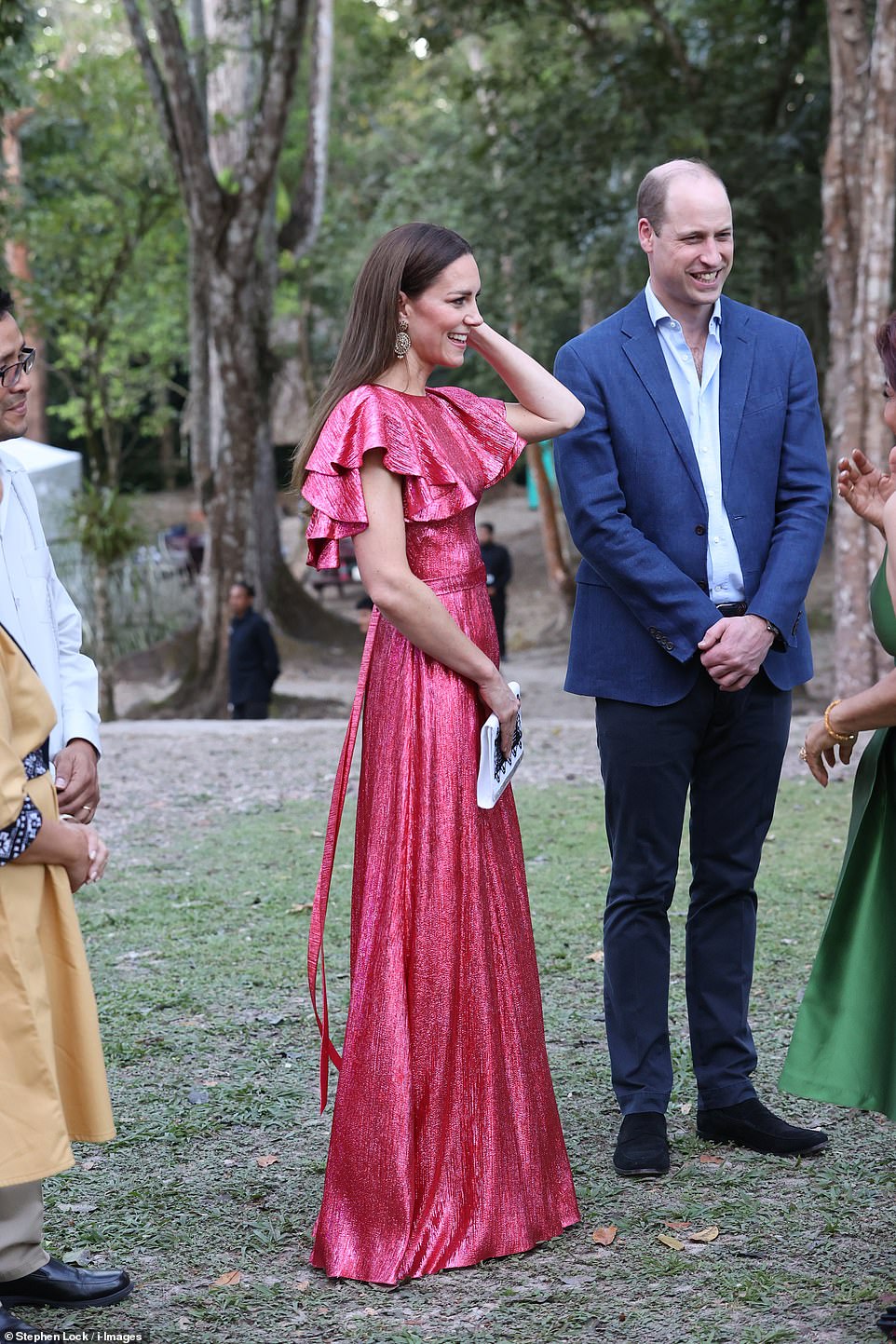 Tom explained the look was particularly effective when combined with the $3,313 (£2,500) pink Vampire’s Wife dress she wore to last night’s engagement as it complemented the frock and allowed attention to remain on her statement earrings. 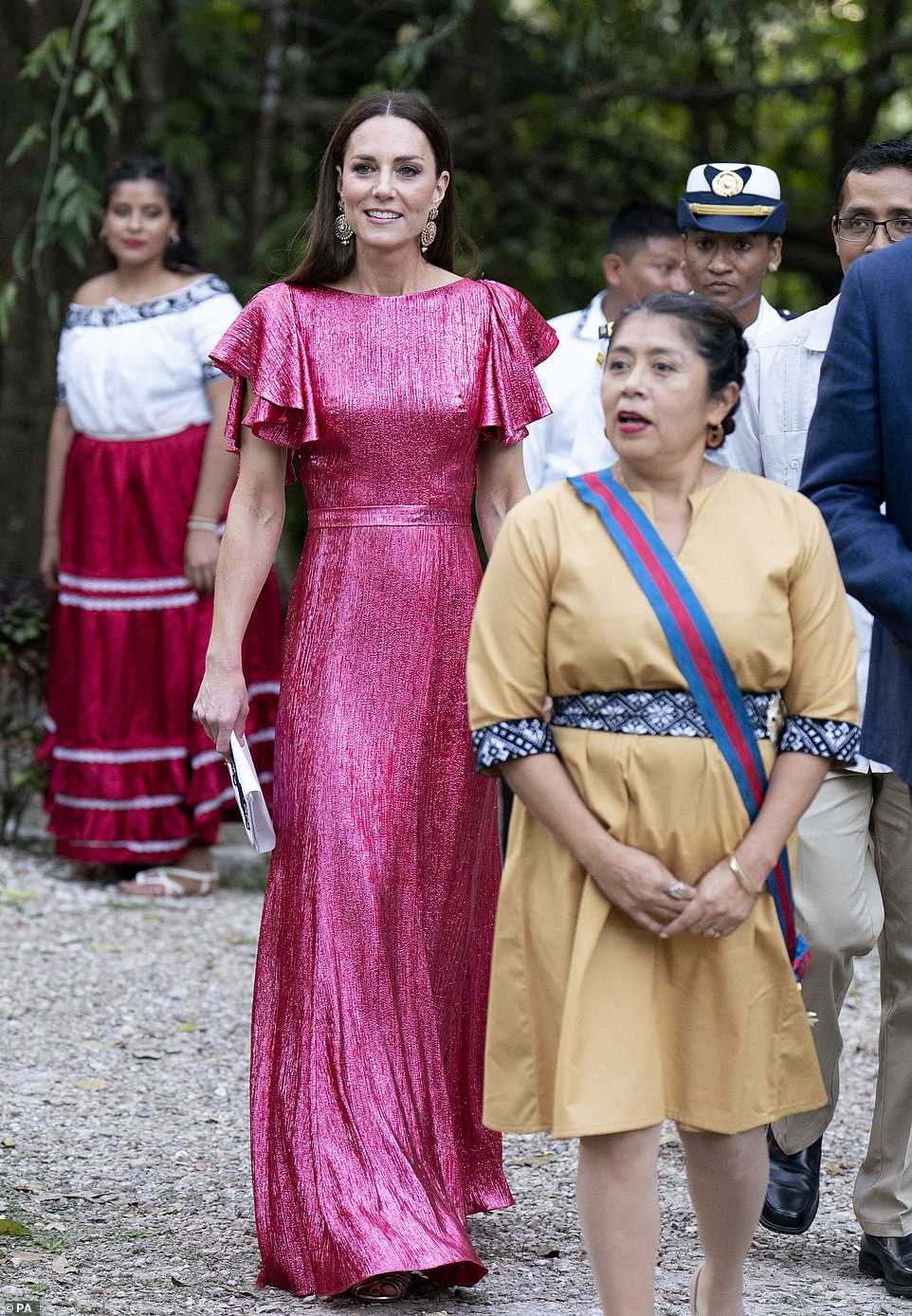 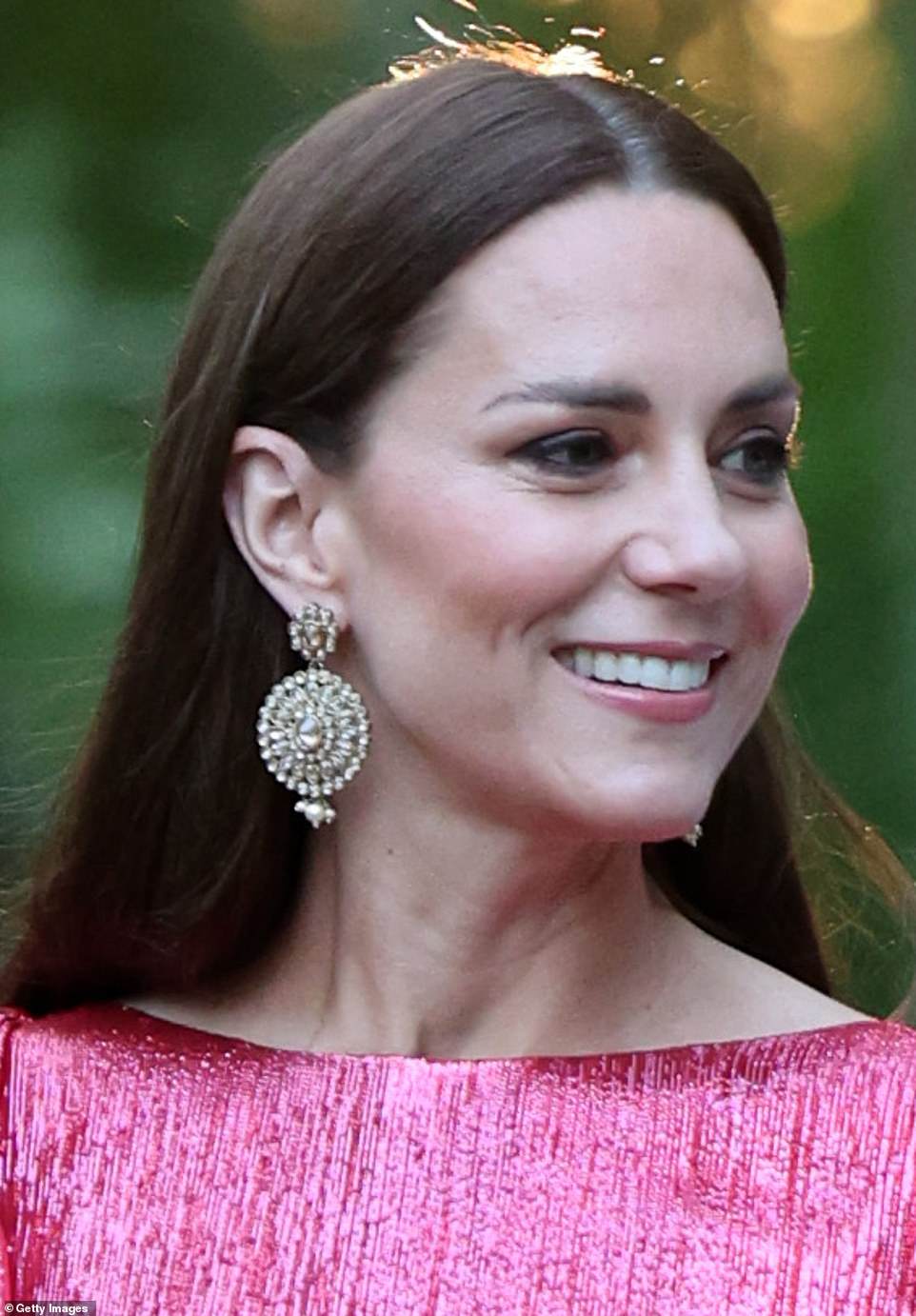 ‘Kate looks very tall and lean. Her dress sweeps to the floor so everything has been lengthened and elongated. The look is very flattering and well put together.’ 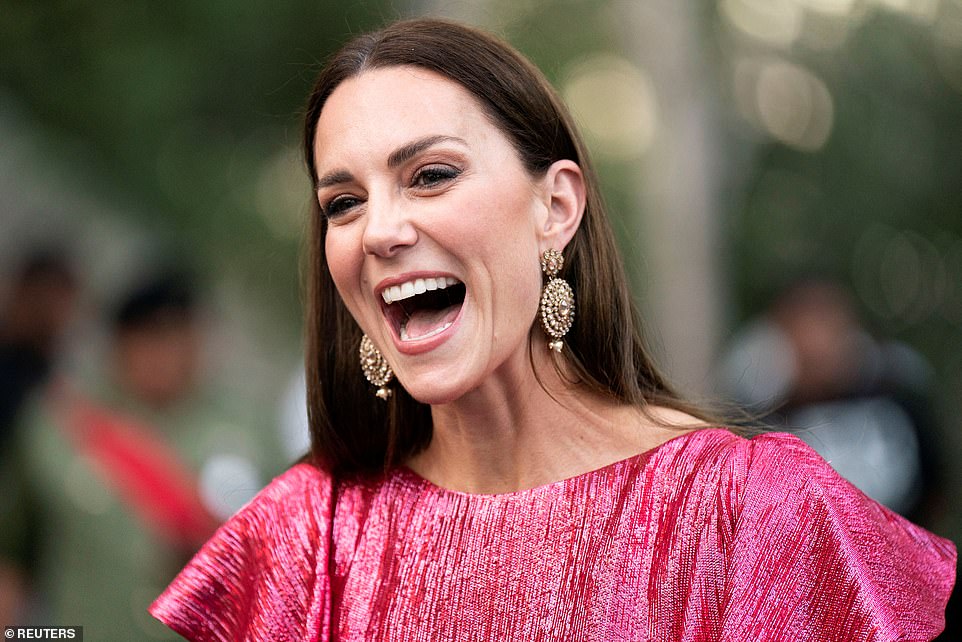 Lily Jeffreys, Senior Stylist and Color Technician at Taylor Taylor London, agreed: ‘It’s quick, easy and simple for her to do without lots of different tools or stylists to help’. 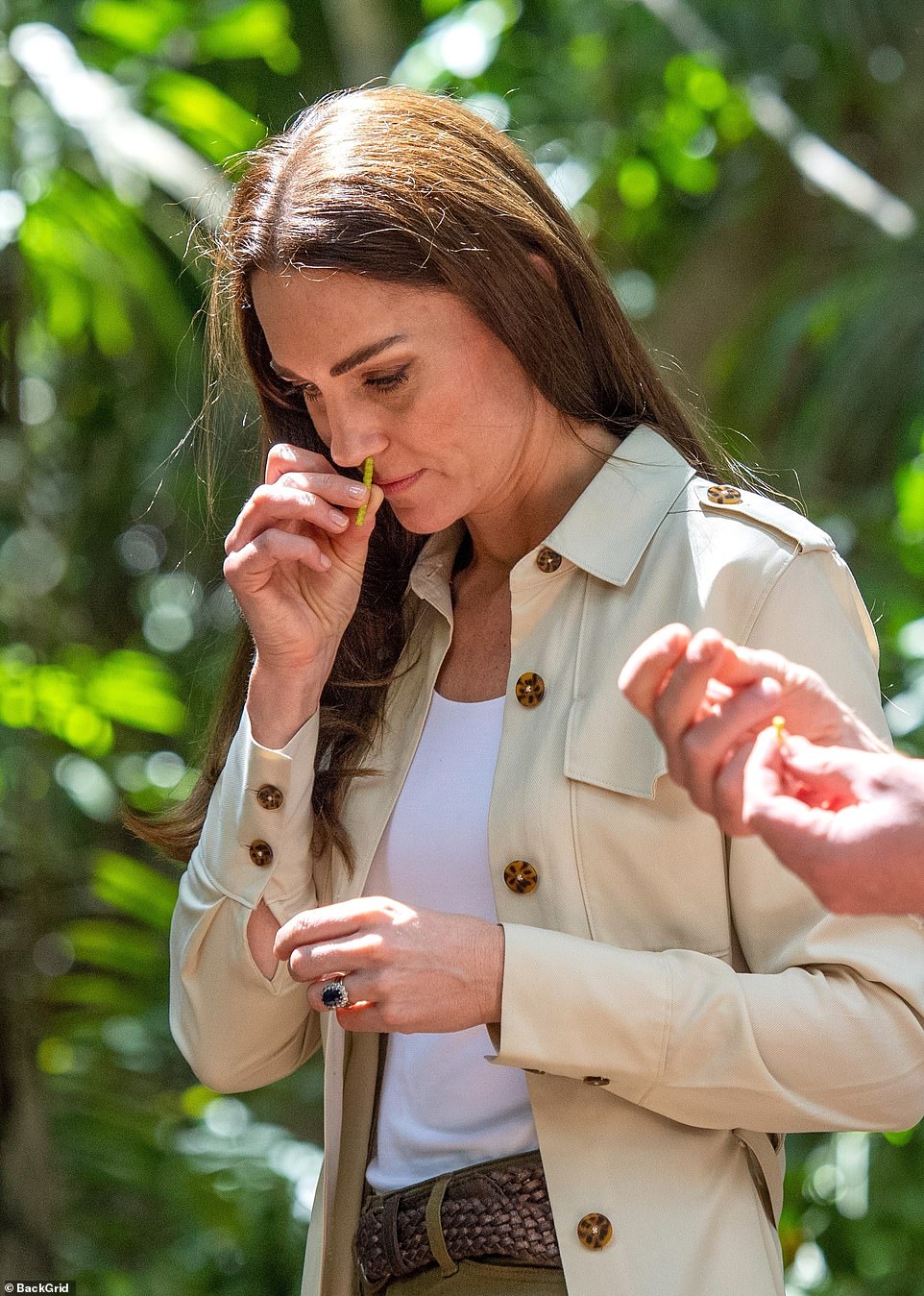 ‘All she needs is a heat protectant, a pair of straighteners and some hairspray to keep it in place all day. When on tour in such humid places a simple straight hairstyle will cope much better than a curly one as there will be less chance of frizz,’ she said. 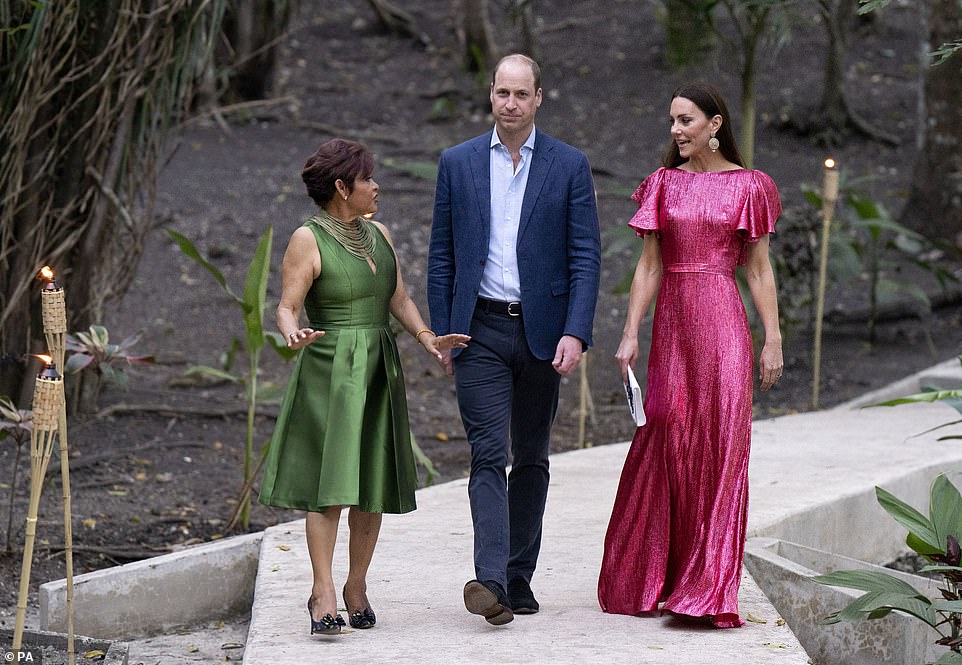 The stylist also speculated whether there might be some showbiz inspiration behind Kate’s look, adding: ‘Kate looks regal but still has fashion references to her look. She might have used early Cher as inspiration and a creative reference. Her look is almost identical to Cher!’ 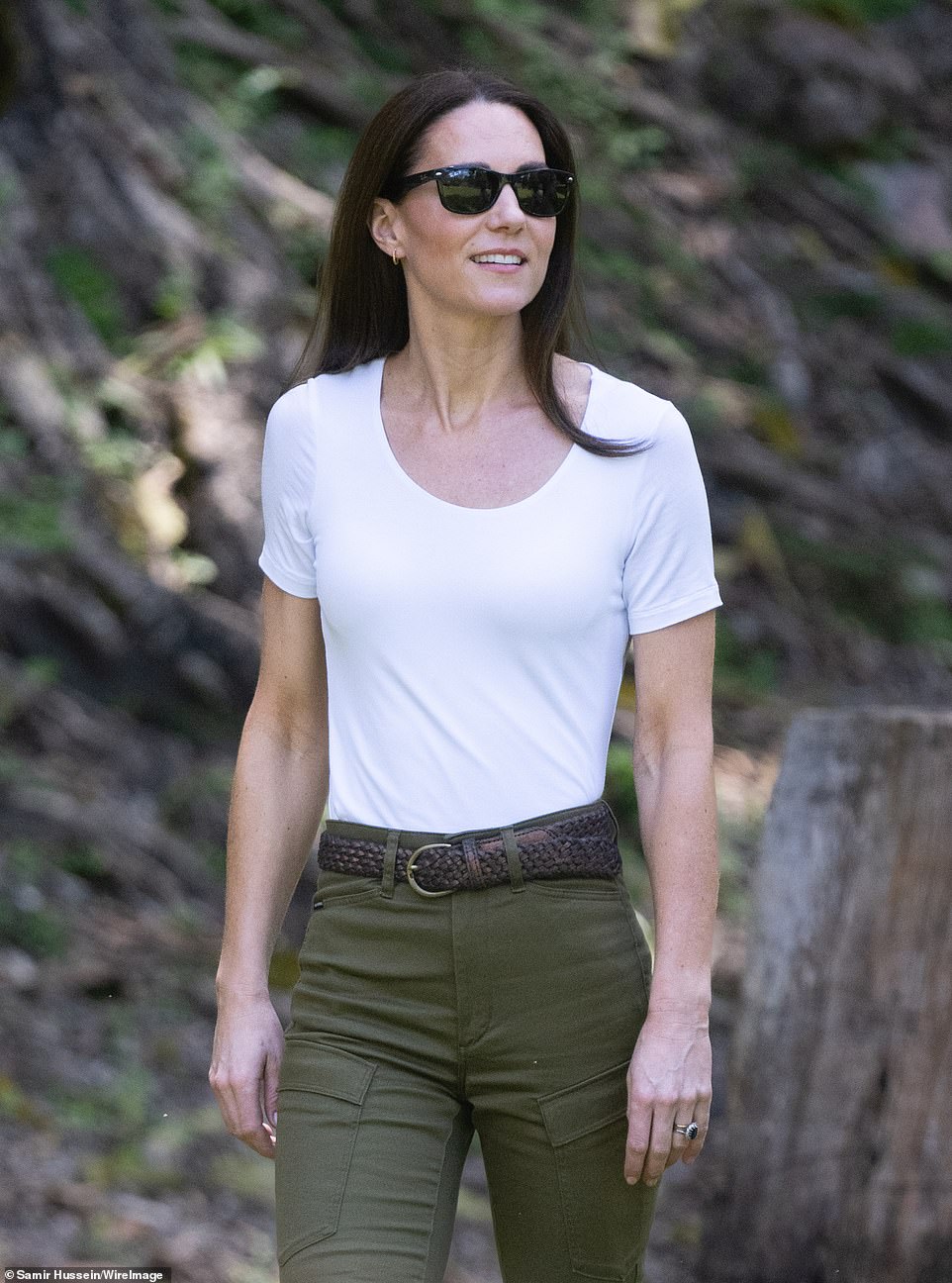 Ricky Walters, director of London’s SALON64, speculated on how the look might have been achieved, saying: ‘This is different to the 90’s where hair used to be straightened within an inch of its life.’ 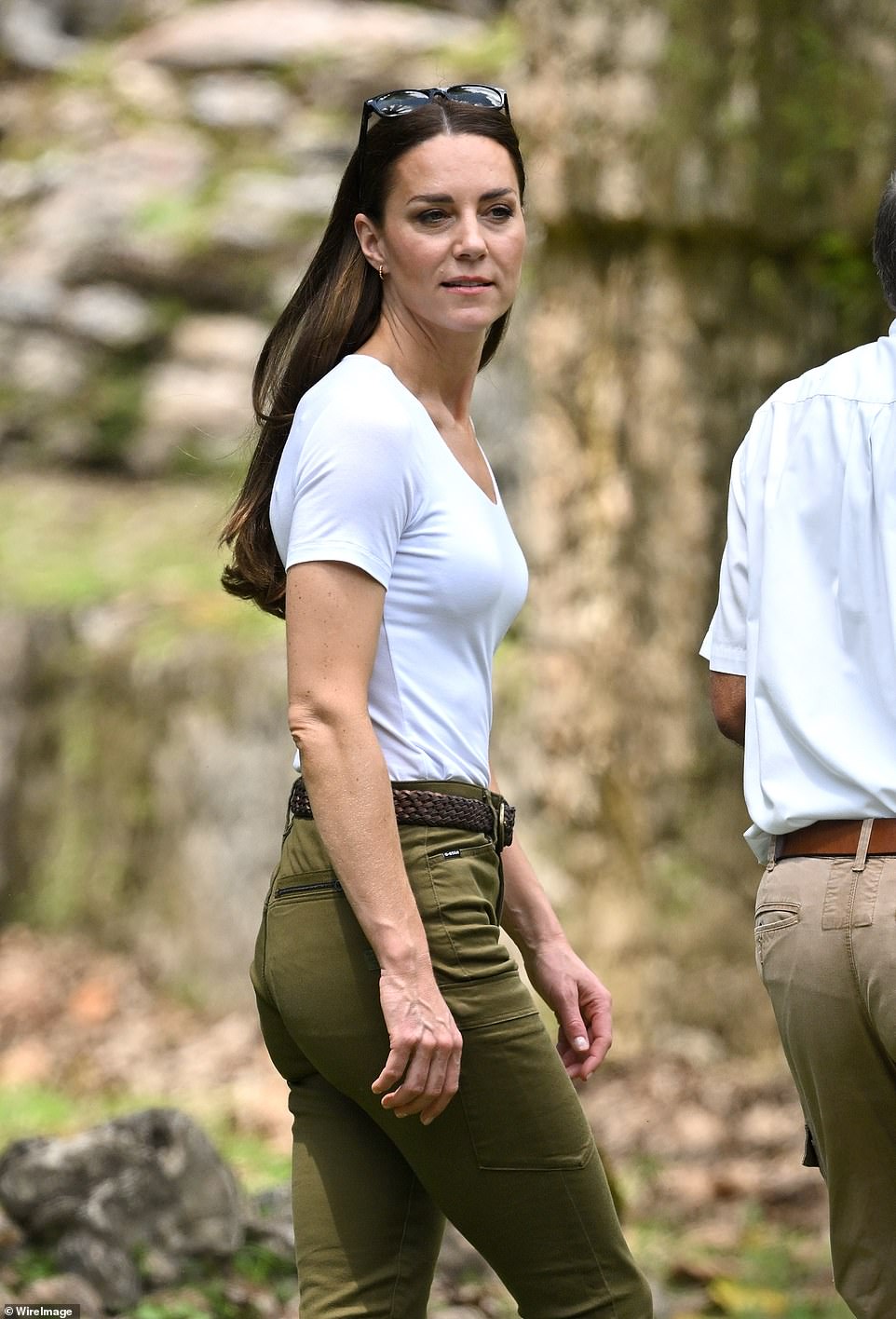 ‘We are far more knowledgeable these days. Hair tools have improved as well as hair products. Kate’s look has started with a beautiful straight blow dry and then simply helped along its way with a pair of straightening irons.’ 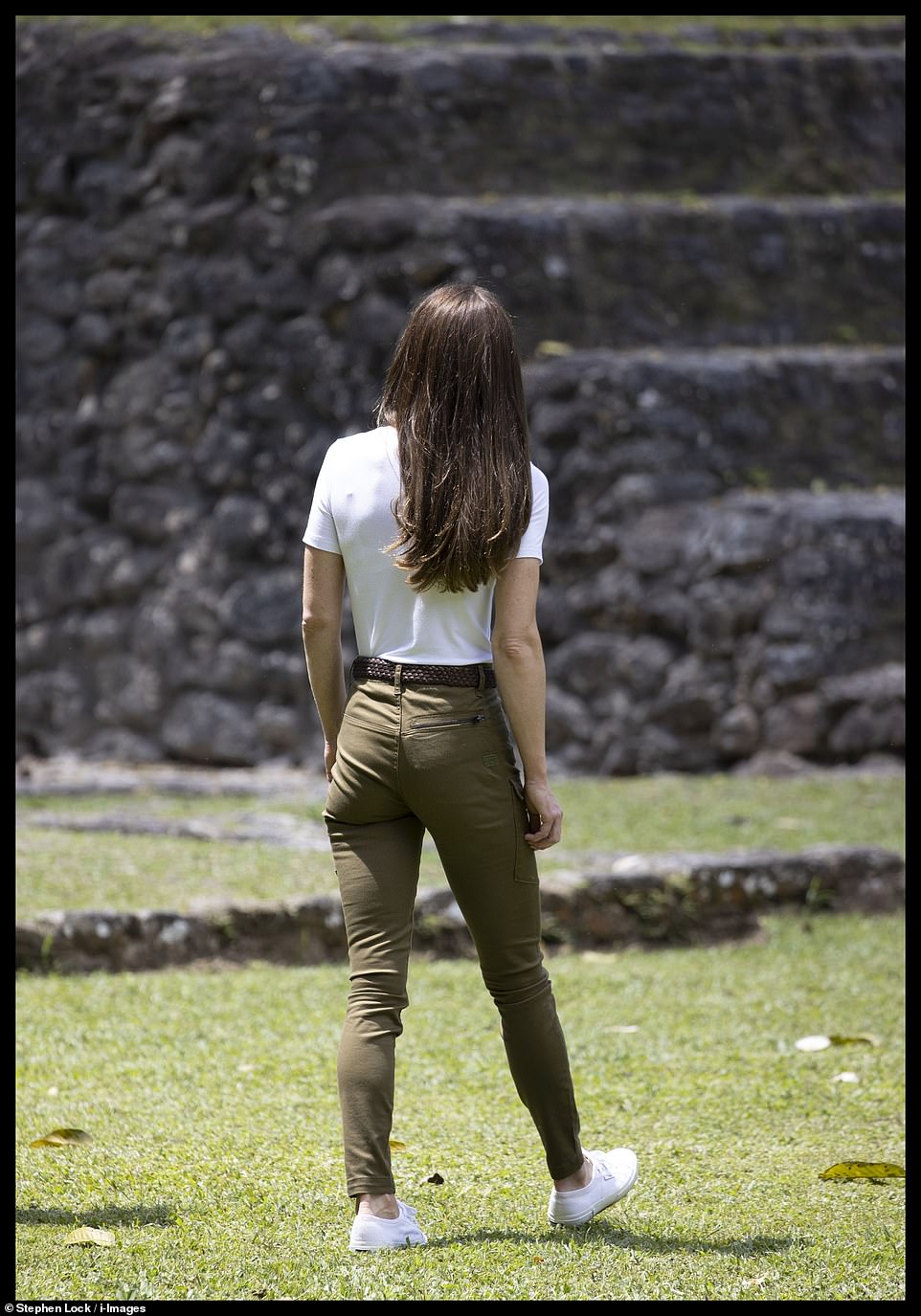 He added: ‘My guess is Kate could have opted for a light keratin treatment. A game changer within the hair industry, it keeps looks like Kate’s locked in for as long as possible and perfect as we approach summer.’ 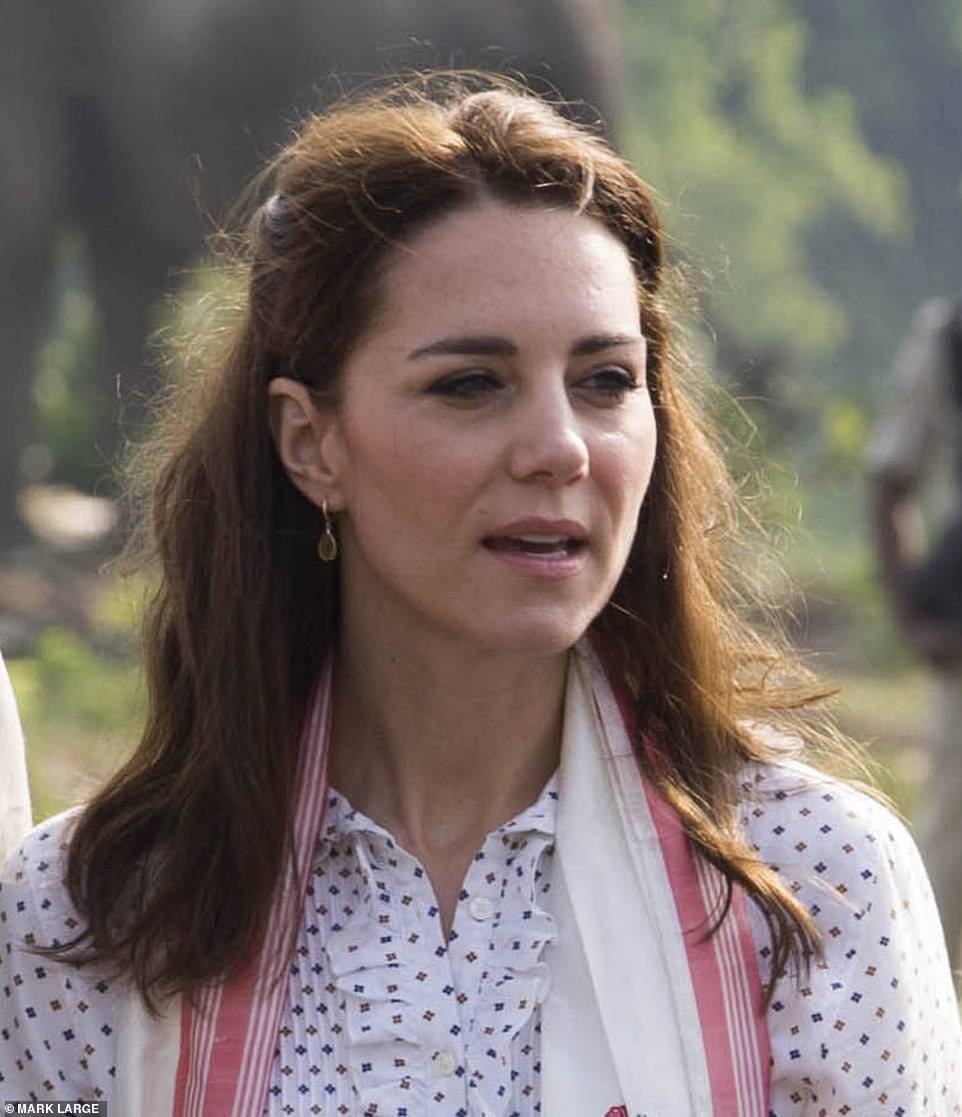 The hairstyle helps avoid the dreaded frizz Kate has suffered with on previous foreign trips, like her and William’s 2016 visit to India (pictured). 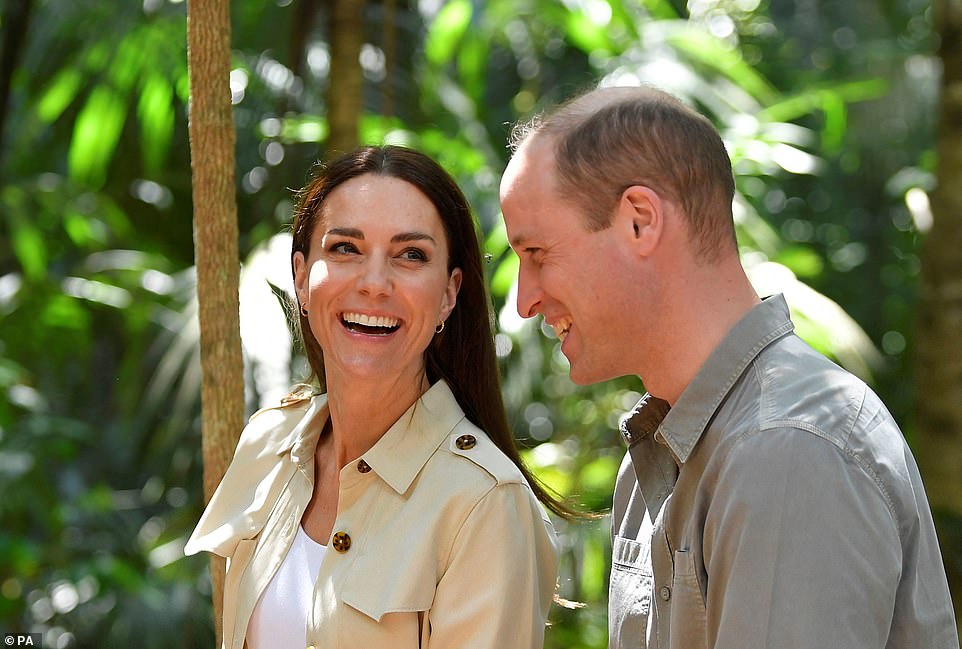 The couple began the third date of their trip learning about the history of the ancient Mayan archaeological site of Caracol, located in the Chiquibul Forest, and took in the country’s tallest man-made structure – known as the ‘sky palace’. 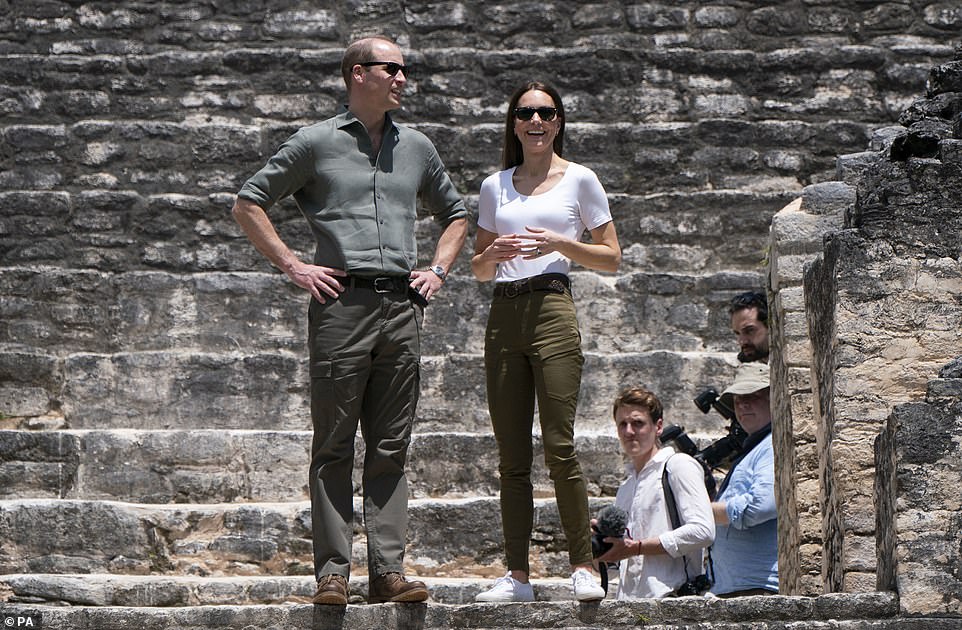 The 3,000-year-old temple, built by the Maya civilization, stood at the centre of a city – home to an estimated 150,000 people and is believed to have been occupied as early as 1200 BC. 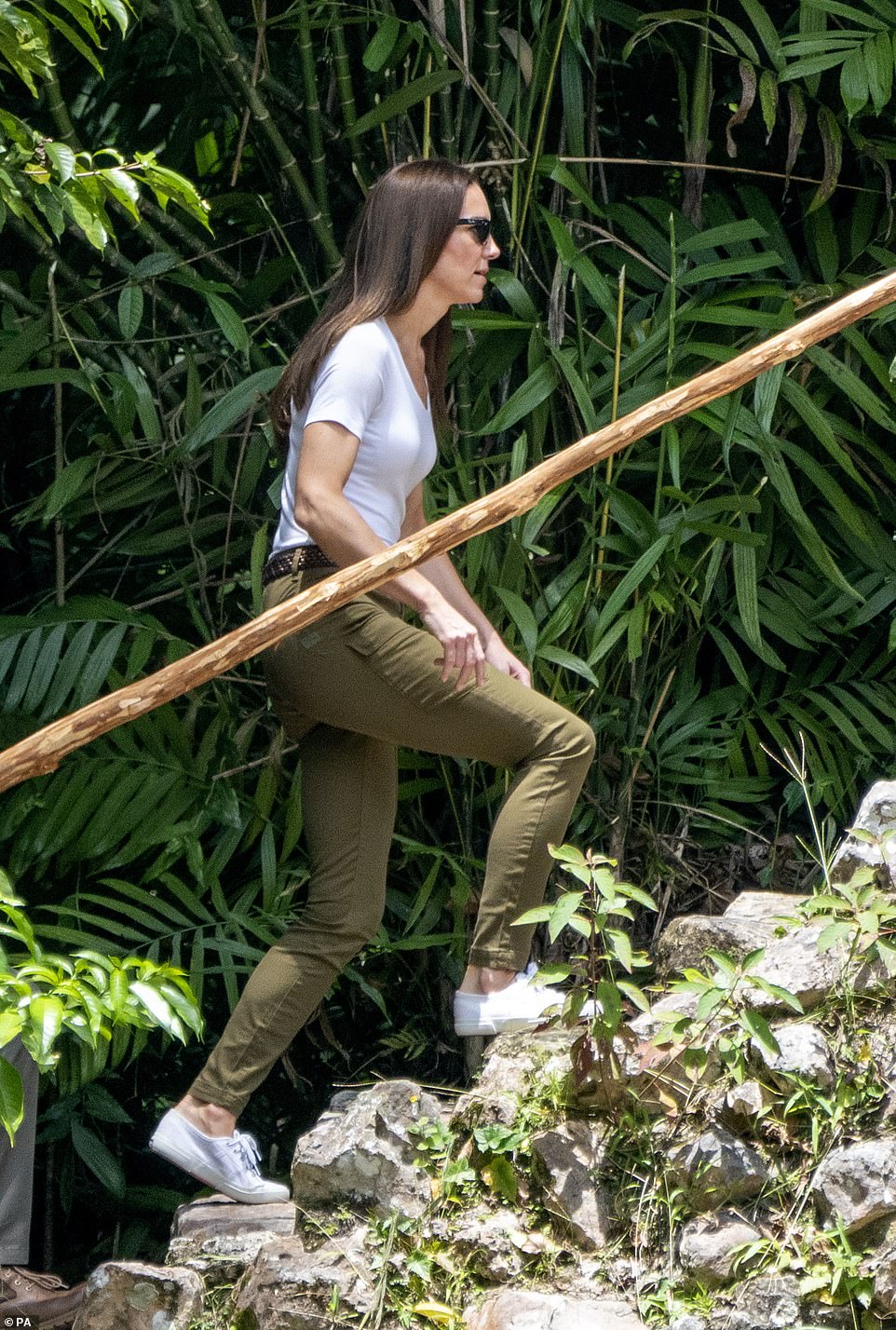 William and Kate climbed to the top of the palace, which is hidden deep in the jungle in western Belize, close to the Guatemala border and were shown ancient Maya sculptures by the associate director of Belize’s Institute of Archaeology, Allan Moore. 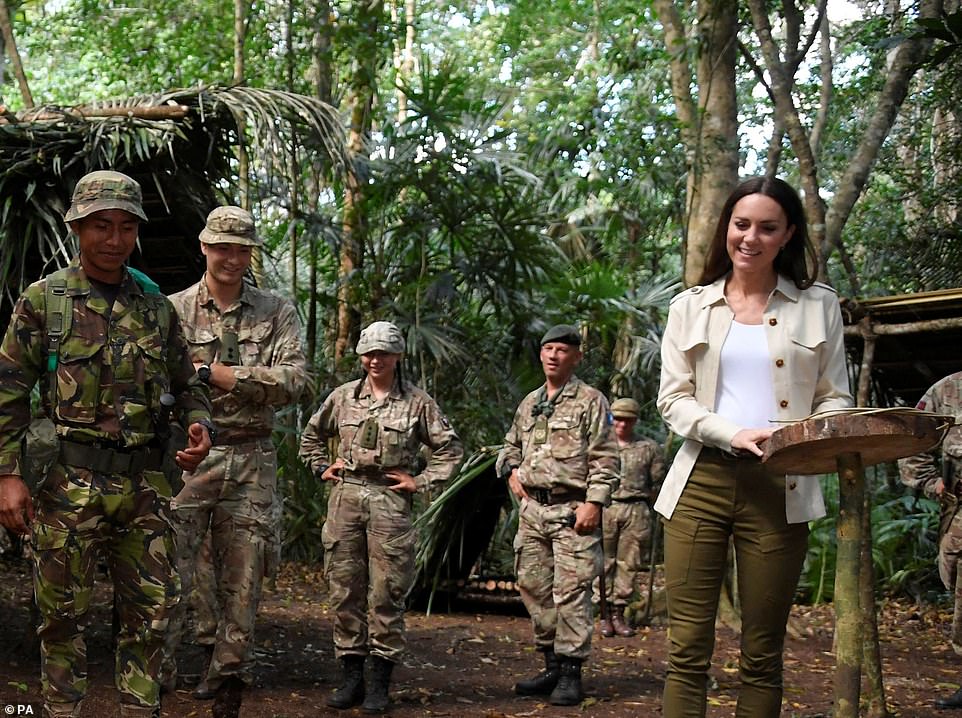 The Duke and Duchess of Cambridge also visited the British Army Training Support Unit (BATSUB) on Monday, which delivers tropical environment training to troops from the UK alongside international partners, and is manned by 12 permanent staff and employs more than 100 locals. The Duke was reunited with his former academy sergeant major at Sandhurst, who now runs the jungle unit, and he demonstrated his former army training by expertly splitting a giant palm leaf down middle to be used for shelter. 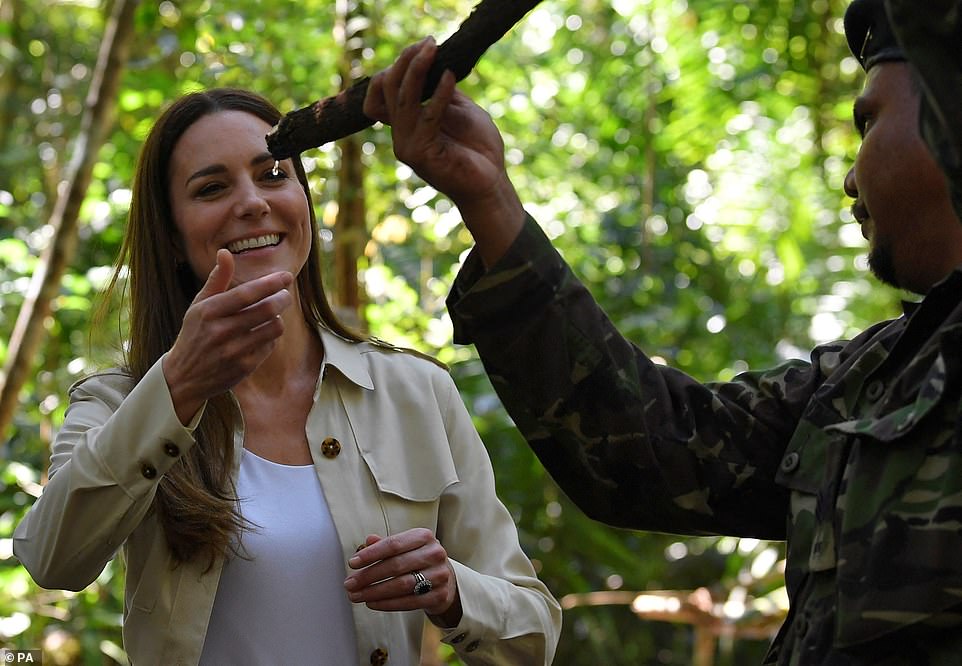 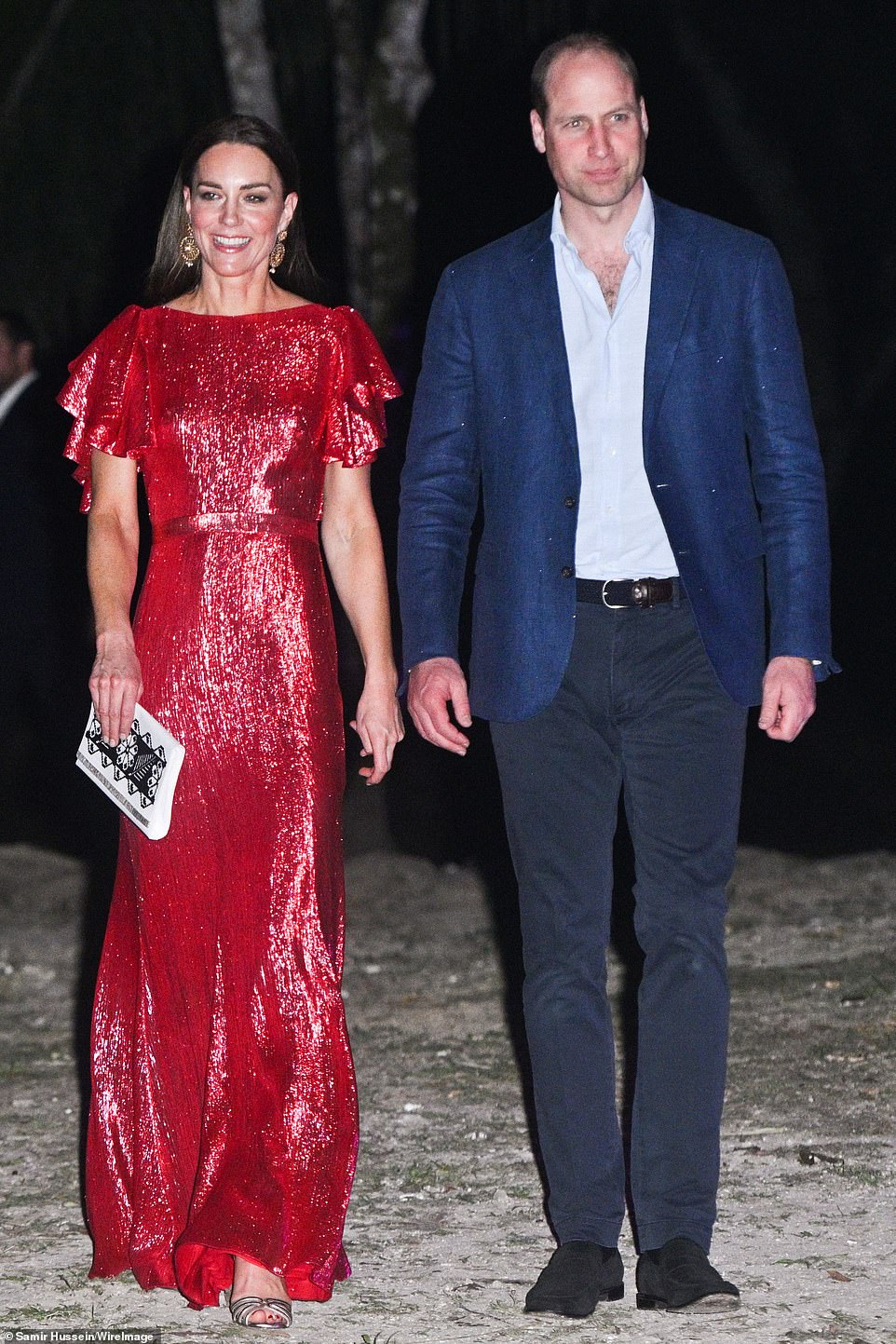 Finally they ended the day with the evening reception in celebration of Her Majesty The Queen ‘s Platinum Jubilee at the Mayan ruins in Cahal Pech, Belize. It marked their final engagement in the country AND Kate’s hairstyle withstood it all. 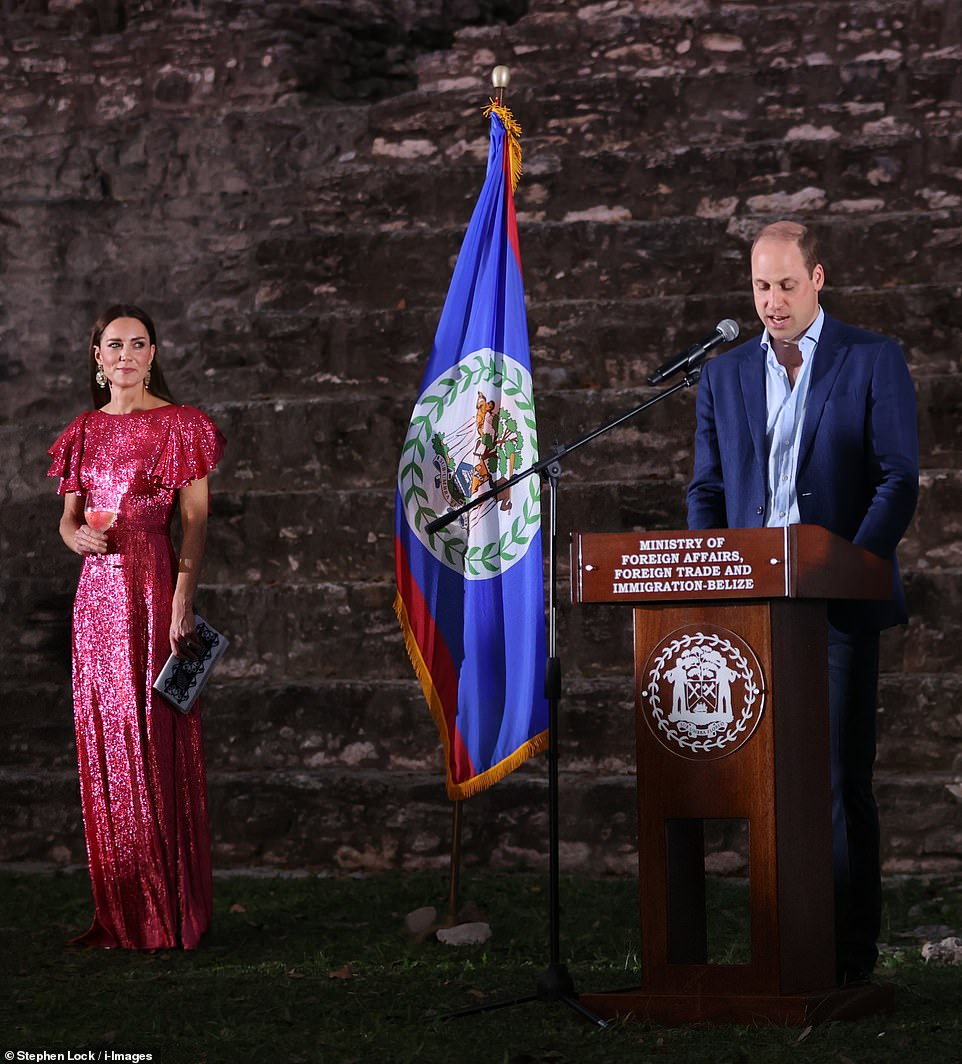 Speaking to guests last night, William quoted words from his grandmother the Queen’s 1994 address to the country’s parliament. He said: ‘She said “I am proud to associate myself with your determination that social justice and personal freedom should flourish under the rule of law.’ 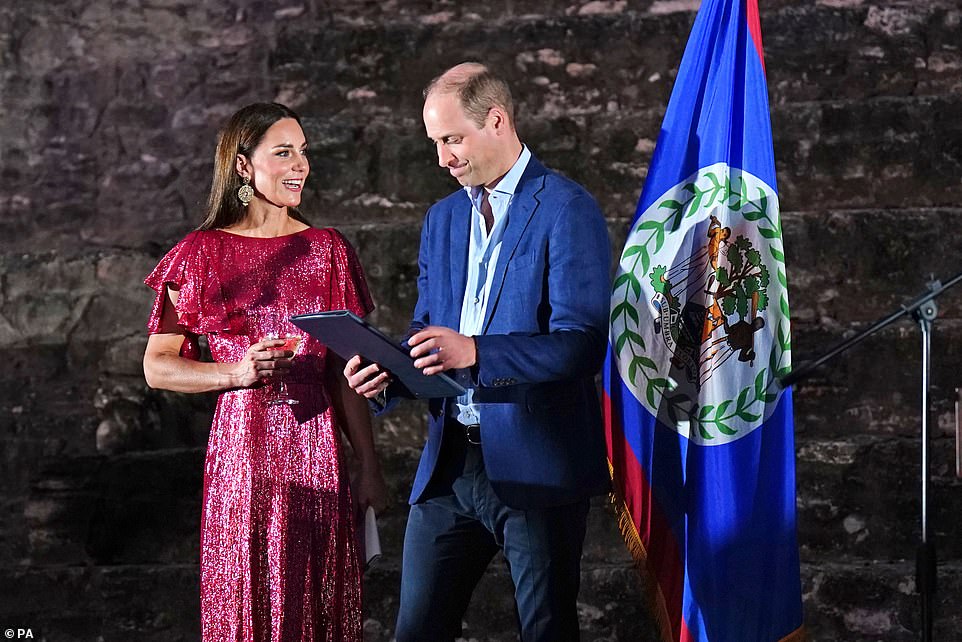 He added: ‘Her Majesty went on to say that “Most of all, democracy is safe-guarded by teamwork – the individual wills of all citizens, each pulling together towards the same objective’. 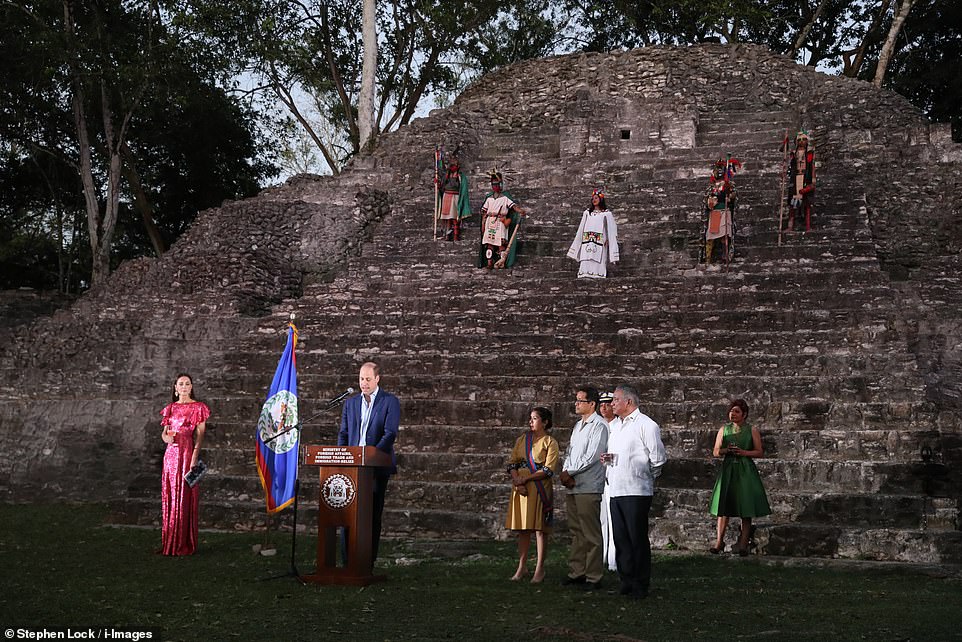 ‘Sadly, elsewhere in the world, that vigilance is being tested today in Ukraine. Belize has joined many others in condemning the invasion and standing up for the principles of international law, peace and security. Today we think of those struggling in Ukraine and we stand with them in solidarity.’ 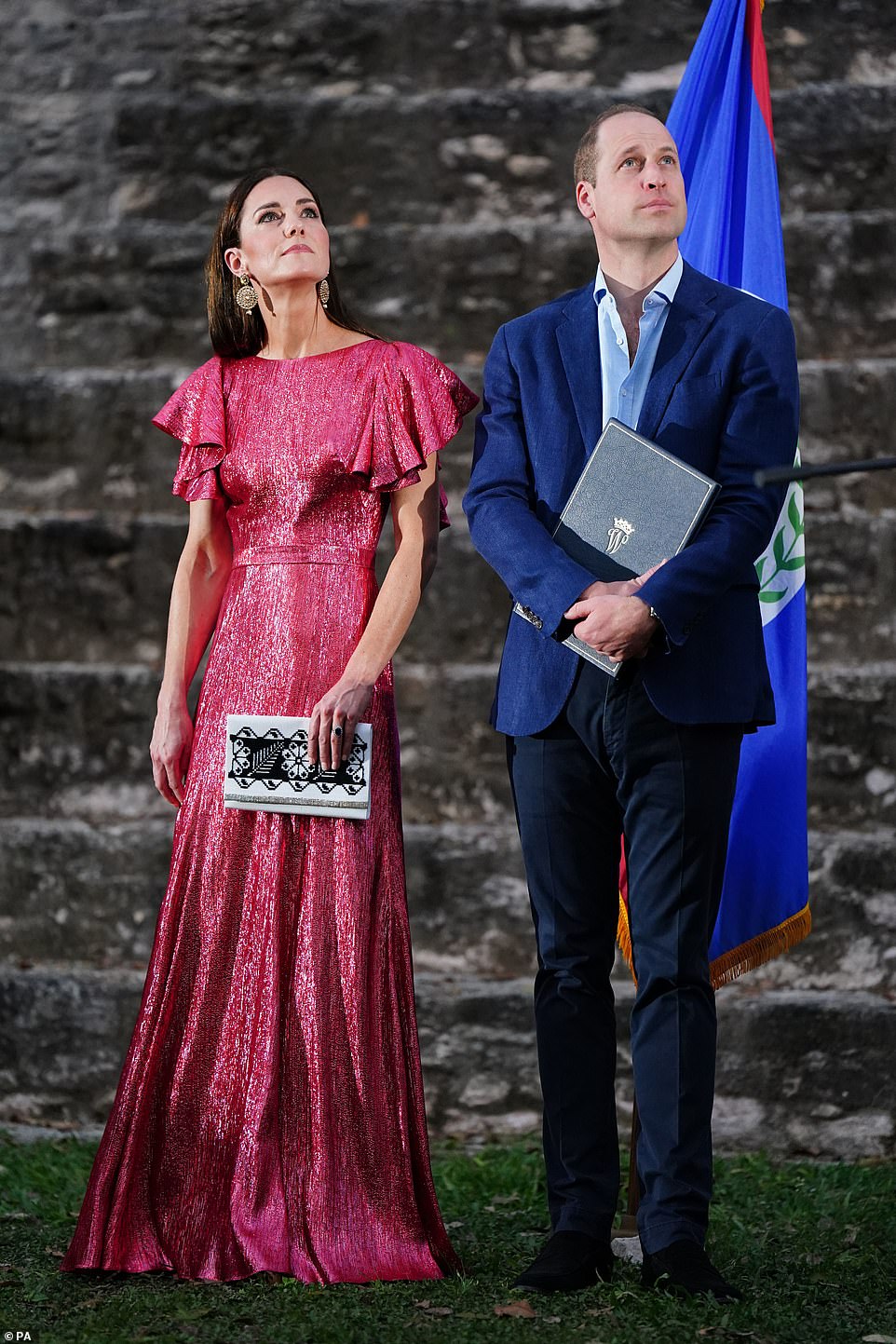 The duke also passed on the ‘very warmest wishes from my grandmother, the Queen of Belize’, on the occasion of her Platinum Jubilee’. 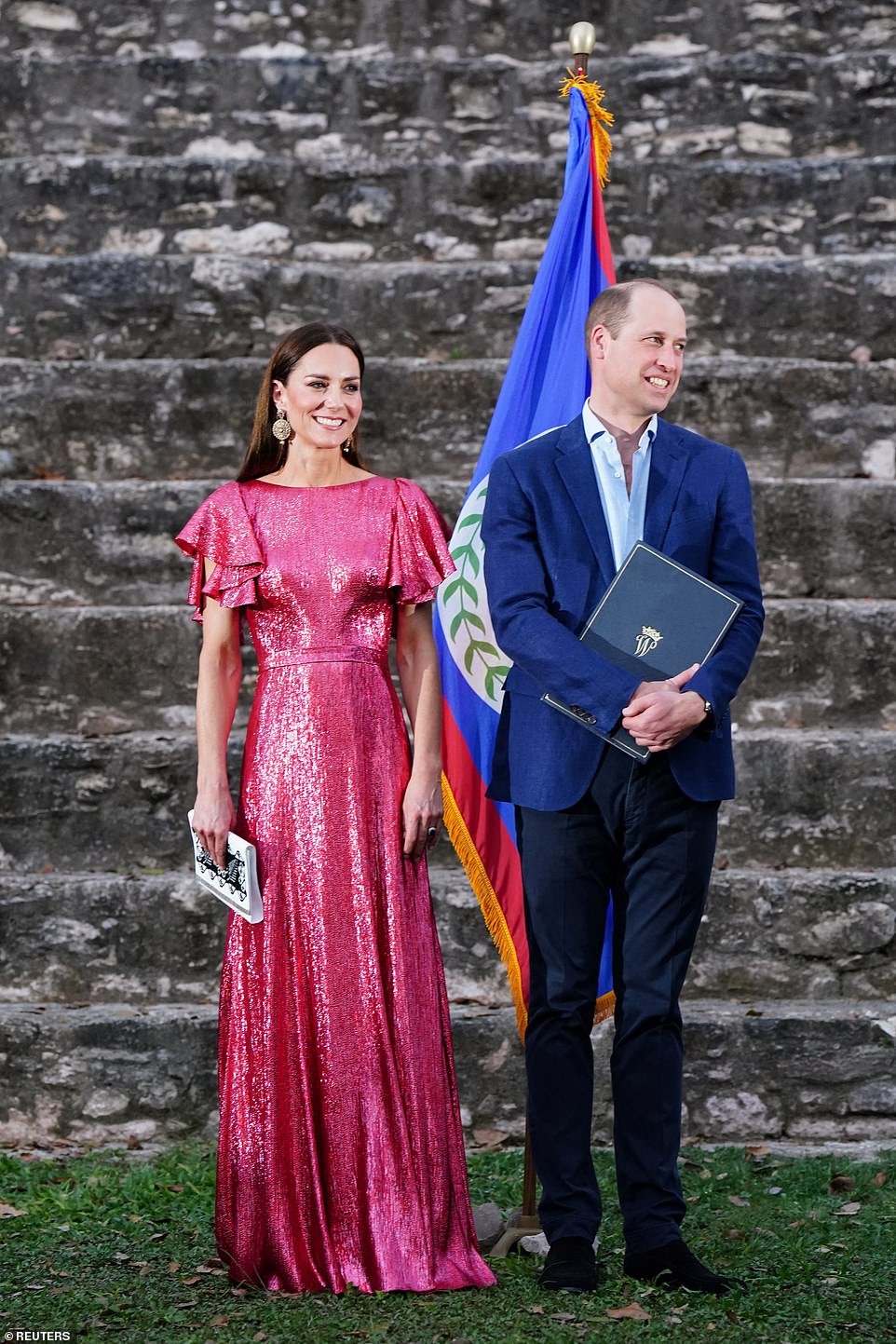 Next, the couple will fly to Jamaica – the next stop on their eight day tour of the Caribbean –and receive an official welcome into the country.