The best jazz festival Sydney has seen in a long time is so hip you can’t even buy a ticket – and it’s at a venue you’ve likely never heard of. Entitled STRATA, the four-night festival will be staged in the nest-like cavity of Chippendale’s Phoenix Central Park, surely the city’s most beautiful music venue.

Phoenix is the brainchild of philanthropist Judith Neilson. Her daughter Beau, the venue’s boss, says the intensity generated by the standing audience’s proximity to the performers at London’s Globe Theatre influenced her mother’s thinking. But Phoenix then flew its own course as a small-capacity music venue of jaw-dropping architecture and perfect acoustics, with free tickets to attract and unite a cross-section of the community. 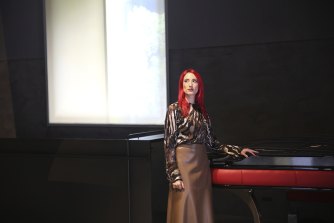 Beau Neilson at the venue: “We need different perspectives.”Credit:James Alcock

The slightly forbidding street-frontage opens to a blaze of natural light and an internal garden, before you enter the performance space one floor up from the playing area. Audience members can watch and listen from there, or descend a gracious staircase to the main floor. Immediately striking is the swirling, stratified ceiling, made up of countless wooden slats slotting into each other like a gigantic jigsaw puzzle. The walls are also timbered, while the floor is concrete. Beau Neilson says the acoustics have “a soft resonance”.

Having weathered the pandemic just after opening, Phoenix is now coming fully to life, built on the site of a martial arts studio that burned down – hence the name. Seating is limited and most people stand happily, given each show’s duration is about 45 minutes.

Tickets are given away via a ballot on the venue’s website. Hundreds or even thousands might enter the ballot for a given concert, from which about 120 winners are randomly selected.

Beau Neilson and her team pursue a diversity of styles (from classical to hip-hop), instrumentation and performers. “We need different perspectives, different voices, different ages and people at different stages of their career,” Beau says. 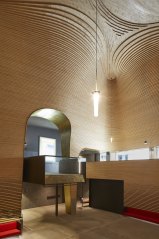 She also wants distinctive acts: “It’s finding one where you think, ‘Oh, gosh, that’s different. I wouldn’t have thought of seeking that out.’ Or maybe they’re doing something I’m familiar with, but in a different way, and being brave with their creative choices.”

Neilson books acts directly and also engages specialist curators, as she’s done with drummer/composer Laurence Pike for STRATA, who pitched the festival idea after performing at Phoenix and being smitten by the sound and architecture. “It feels almost like the Utopian idea of an art space,” Pike says. “By Sydney standards, especially, it feels like the sort of space you would come across in Europe.”

Pike has expertly curated each night with a combination of younger bands, more established ones and genuine headliners in the guise of Triosk, the Phil Slater Quintet and pianists Mike Nock and Barney McAll. At Pike’s suggestion, Nock is performing – for the first time ever – his most lyrical and emotive album, 1981’s Ondas. Pike had previously shied away from proposing the idea to his sometime collaborator, partly because he assumed Nock would say no, given his constant laser focus on current projects. In the event, the pianist enthusiastically agreed on condition that Pike play drums, the pair joined by exceptional young bassist Jacques Emery.

The other coup is the reunion of the internationally acclaimed Triosk after it splintered less than amicably 15 years ago. Consisting of Pike, keyboards player Adrian Lim-Klumpes and bassist Ben Waples, the trio’s troubles were never musical. “It was more just a personal breakdown,” Pike says. “We were in our mid to late 20s and just trying to work out who we were as people. We’d started playing together from a very young age, we’d made three albums, and before we knew it, we were doing these international tours.”

When COVID-19 halted their solo projects, Waples suggested a reunion. “For whatever reason it suddenly felt like the timing was right,” Pike says. “Initially we got together and it was almost like a bit of group therapy, just for everyone to say their piece and put the ghosts to rest.” Then they tried playing, and they knew the music was as good as ever.