The View: Sunny Hostin, Whoopi Goldberg Clap Back At Critics Of Simone Biles Pulling Out Of Olympics

‘The View’ hosts all showed support for Olympic gymnast Simone Biles after she withdrew from the Olympics to take care of her mental health.

The View co-hosts Sunny Hostin, 52, and Whoopi Goldberg, 65, clapped back at people who have tried to put Simone Biles, 24, down after she withdrew from the team finals at the Tokyo Olympics to focus on her mental health. All The View co-hosts expressed support for the gold-medal winning gymnast, but Sunny and Whoopi snapped back at people that have been especially negative to Simone.

While tons of people and celebrities had kind words for Simone when she announced that she would be pulling out of the competition to focus on her mental health, the gymnast also had a few detractors, who felt that she should’ve competed regardless of her mental health. Meghan McCain noted the trauma that Simone has gone through, especially with USA Gymnastics doctor Larry Nassar, who was convicted for sexual abuse. Sunny said that it takes “mental toughness” to overcome those types of trauma. Sunny then addressed haters, who felt Simone shouldn’t take her mental health into account.

Sunny clapped back and explained that being an Olympic athlete takes so much more than her critics have mentioned. “What I’m disgusted again by today are people saying that she’s a ‘quitter’ or people saying that ‘she doesn’t have mental toughness.’ You don’t get to be Simone Biles without that kind of mental toughness,” she said. “How dare they.”

After defending the Olympian, Sunny said that no matter what happens, Simone is still the greatest of all time (GOAT) in her sport. “She’s taking care of her mental health, and that is what’s most important here. She is the GOAT, and she will continue to be the GOAT,” she said passionately. 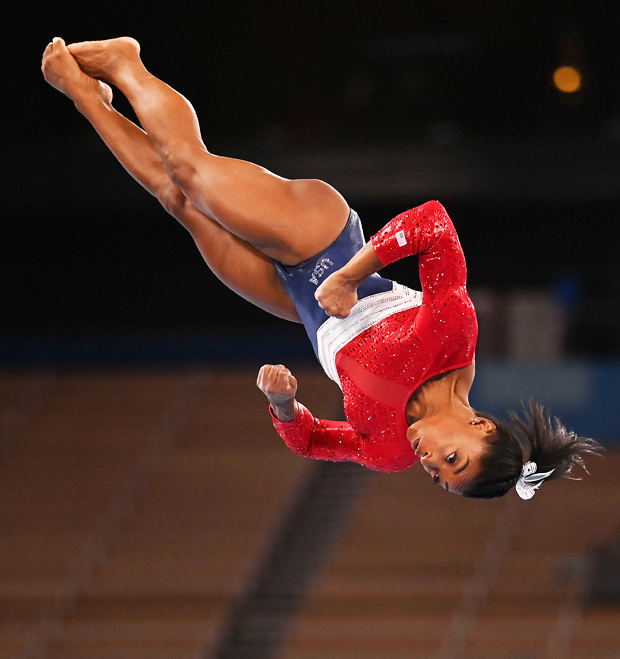 Before cutting to commercials, Whoopi said that she’s excited for when the gymnast does compete again. “Simone Biles said she needed a break, and she’s taking a break. It doesn’t mean she’s not coming back to compete in this Olympics. I think when she’s ready, she will get out there, and she will kick-butt,” the comedian and co-host said.

Whoopi then challenged everyone who dissed the athlete to do even a part of what Simone could do during the Olympics. “For all the nay-sayers, I dare one of you to try one thing she has done. Do a backflip. We’ve all been sitting here with our behinds getting big, nobody can do this backflip. You know what? Back off and watch a pro do magic,” she said.