These are just some of the effects of the coronavirus pandemic, according to data from the Australian Institute of Health and Welfare, which for the first time released a national snapshot of the nation's health and how it was affected by COVID-19. 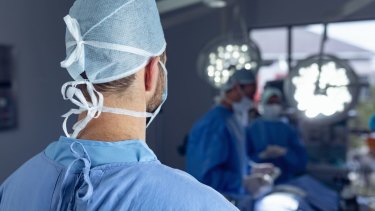 "Every time we turn over a data stone, as it were, we find a new thing that was impacted indirectly or directly by COVID," Dr Adrian Webster, head of the institute's health systems group, said.

Elective surgeries plummeted when non-essential elective surgery was shut down across the country. The most significantly affected public elective surgeries were varicose vein treatment, which fell by 30 per cent, myringotomy procedures to drain fluid from ears fell by 26 per cent, and tonsillectomies dropped by 22 per cent.

Professor Paul Myles, director of anaesthesia and perioperative medicine at The Alfred Hospital, said the ear, nose and throat procedures blew-out because there was a higher risk of COVID-19 transmission and complication.

"If a patient was carrying the virus, even if they were asymptomatic, they pose a great risk of infecting hospital staff, but also they themselves are at risk if they got infection just before or just after surgery, it would be quite nasty," he said.

Varicose vein surgery is typically undertaken in older patients, who were at heightened risk of complications, and could generally be delayed for a few months safely, he said.

Easing restrictions around the country has meant elective surgeries and cancer screening has picked back up, but Dr Webster said it was unclear whether the activity has gone back up enough to clear whatever backlog might have been created.

"There were around 70,000 less admissions from elective surgery waiting lists than in the previous year," he said. "[That's] the kind of scale of potential backlog of elective surgery activity that we're now trying to work through across the system."

Some of the health areas affected by the pandemic

Emerging research suggests the pandemic will delay elective surgeries across the world by nine months. But Professor Myles predicts the backlog for surgeries in Australia will be substantially fewer months.

The Monash University Professor led a national taskforce screening surgery patients for coronavirus to determine if it was safe to recommence surgeries in Australia. More than 3000 Australians were screened in June and July before their surgeries with only three testing positive to the virus.

A further study across eight Victorian hospitals, including in COVID-19 hotspots suburbs in Melbourne's north and west, screened more almost 5000 patients before surgery at the height of the second wave with only four patients returning a positive test.

"There are no guarantees for the future, but at this stage because of the data we've collected it tells us we can safely continue all elective surgery right now," he said.

"Even if there is an outbreak here and there, given everything that everyone has learnt, both government and hospitals, there should be very strong confidence it will have close to zero impact on elective or emergency surgeries."

Breast cancer screening also dropped during the pandemic but bounced back to a degree. The number of mammograms conducted between July and November was 12,000 higher than the same period in 2018, but there were 145,000 fewer mammograms between January and June compared to that period in 2018.

Emergency departments initially saw a bump in the number of people attending for respiratory concerns, peaking at 785 in the week of March 23. But since then there has been a "really dramatic reduction" in presentations, Dr Webster said, with more than 100,000 fewer in 2019-2020 than the previous year.

"The areas that dropped the most dramatically were injuries; presentations related to injury reduced quite a bit as a result of the social restrictions," he said.

END_OF_DOCUMENT_TOKEN_TO_BE_REPLACED

END_OF_DOCUMENT_TOKEN_TO_BE_REPLACED
We and our partners use cookies on this site to improve our service, perform analytics, personalize advertising, measure advertising performance, and remember website preferences.Ok