They screamed, we screamed. Now they’re in Scream again

This past Halloween, Campbell brought her children to a pumpkin patch in Hollywood, where they saw fellow visitors dressed in the groaning Ghostface masks worn by the murderers who have tormented her character in these undying horror movies.

Though the costumed revellers didn’t seem to notice Campbell, she resisted her older son’s urgings to reveal that they were in the presence of Sidney Prescott, the intrepid Scream heroine she has played since 1996. 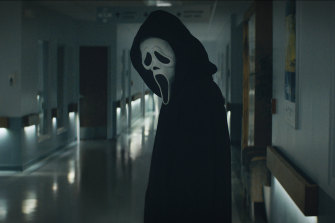 Ghostface in a scene from the latest iteration Scream.Credit:AP

“My 9-year-old hasn’t seen the movies, but he obviously knows about them,” Campbell said. “And he was like, ‘Mum, you should go tell them!’ I’m not going to walk over and be like, ‘Hey, do you know who I am?’” She laughed and added, “Although it probably would be fun for them.”

Hearing Campbell’s tale, her two longtime Scream co-stars joked about how their connections to the films affected them at Halloween. Courteney Cox, who plays the strident TV personality Gale Weathers, said that she kept her own supply of Ghostface masks: “I bought five from Amazon.”

David Arquette said it was even easier to remind people of his screen identity as the hapless officer Dewey Riley. “Why do you think I have this moustache?” he asked.

At its release, Scream reinvented the slasher picture, populating it with photogenic cast members who were well-versed in the genre’s rules and tired of its cliches. It made a star of its screenwriter, Kevin Williamson, reinvigorated the career of its director, Wes Craven, and kicked off a cottage industry of imitators and parodies. 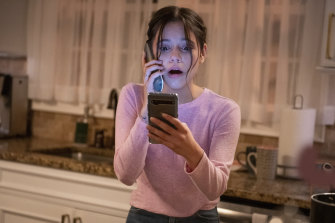 The slow-burn success of the first movie elevated its lead actors: Campbell, a star of the TV drama Party of Five; Cox, enjoying her first flushes of success from Friends; and Arquette, a scion of a family of character actors. Three sequels bonded them for life, and Cox and Arquette fell in love and got married.

But following Scream 4 in 2011, the series seemed to grow tired. By then, Cox and Arquette had separated and would later divorce; Craven died in 2015. A Scream TV series only loosely connected to the movies ran for three years on MTV and VH1 but gained little cultural traction.

Now, after a decade-long absence from theatres, a new Scream — with no numerals or subtitles, from new directors and new screenwriters — is in cinemas. It is both a reboot and a sequel, introducing new characters (played by Melissa Barrera, Jenna Ortega, Jack Quaid and others) to an audience equally accustomed to franchise do-overs like Star Wars: The Force Awakens and art-house horror films like The Babadook and Midsommar.

The latest Scream also brings back Campbell, Cox and Arquette as the founding characters, who have grown well into adulthood and been altered in different ways by their past encounters with the various Ghostface killers. For the actors, the proposition of returning to Scream is, well, a double-edged one: a chance to rekindle old connections and remember what made the previous films great — tempered by the fear that they will squander the series’ legacy if they cannot duplicate past glories.

When she was approached about the new movie, Cox said, “I was really like, What? They want to do another Scream?” But as she considered it further, she thought, “Why not go back to something that was such a huge part of my life and play a character that was fun? They must have a real vision for this if they want to bring back the franchise and take the risk.”

As they spoke in a video interview at the end of November — Campbell and Cox together in one window, Arquette by himself in another — the actors shared a tentative intimacy, like old classmates encountering each other at a high school reunion. They traded goofy laughs as each claimed to have forgotten key details about the past Scream films and made self-deprecating jokes about their accomplishments.

Asked how she was hired, Cox said her manager suggested her. Or: “It could be that my manager said, ‘She’s not that good and I don’t think you should hire her.’ But who knows?”

What they agreed on about the first film was the brilliance of Williamson’s convention-busting script and their admiration for Craven, who previously made seminal horror movies like The Last House on the Left and A Nightmare on Elm Street. The cast was largely shielded from behind-the-scenes conflicts between him and Dimension Films, which produced the original Scream series and had reservations about Craven’s work on the first movie. Campbell said of the director, “He was very gentle and kind and quiet.” 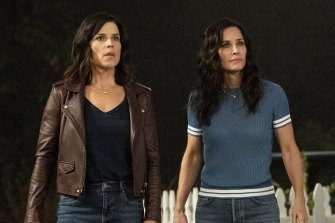 Scream withstood a fourth-place opening weekend in December 1996, overshadowed by the animated hit “Beavis and Butt-head Do America.” Several days later, Campbell got a call from her agents. “I thought, Uh-oh, something’s wrong,” she recalled. “And they said, ‘It’s at $30 million.’” Her voice dropped to a whisper: “I was like, ‘Is that bad?’” In fact, the film would run until the summer and gross more than $100 million in the United States alone.

A sequel was already in production and released in December 1997. (“It was college next, wasn’t it?” Campbell asked. “You went to college,” Arquette affirmed.) Scream 3 followed quickly in 2000, adding more layers of metacommentary as the characters’ brushes with death continue to inspire a hastily made movie-franchise-within-a-franchise called Stab.”

With each entry, the Scream stars said, they never felt the pressure was on them to sustain the overall quality of the series. “In television, when I go out and do something new, it’s petrifying,” Cox said. “You feel nothing can live up to what you’ve done before. But in movies, we get the script and come to play our characters.”

But Williamson said that Scream 4 left him and Craven feeling burned out. “The studio was second-guessing themselves and kept giving note after note after note,” the writer said. “I finally was like, ‘Guys, I don’t know what I’m writing anymore — I’m just typing.’”

After Craven’s death, he said, “in my heart, it was over. Without Wes, I didn’t think there would be a Scream.”

Years went by, and The Weinstein Co., which owned Dimension Films, collapsed after its co-founder Harvey Weinstein was accused of sexual assault and harassment by numerous women. (He has since been convicted and sentenced for sex crimes and faces further charges.)

The rights for Scream were eventually acquired by Spyglass Media Group, which partnered with Paramount to produce a new entry written by James Vanderbilt (Zodiac) and Guy Busick (Ready or Not) and directed by Matt Bettinelli-Olpin and Tyler Gillett of the filmmaking group Radio Silence (Ready or Not, V/H/S).

Williamson, an executive producer on the new Scream, said that the project had his blessing. “My first thought was, Wait, they’re not going to ask me to write it? How dare they,” he said with a laugh. But after hearing the creative team’s plans for the film, he said, “They had it all figured out. I’m like, ‘OK, this works.’”

Naturally, this Scream sees another Ghostface once again plaguing the fictional California town of Woodsboro, requiring the return of Sidney, Gale and Dewey. But bringing back the actors who played them was hardly a certainty.

The biggest obstacle, they said, was the absence of Craven: “I don’t see how that happens — emotionally but also practically,” said Campbell. “Who’s going to do it as well as Wes?”

But one by one, the actors were placated by the film’s directors, who wrote them letters praising their past work and urging their involvement.

“It was weirdly the easiest and the hardest thing to do,” Gillett said. “It’s so easy to express our admiration for them as actors and for Wes and his work.” The challenge, he said, was that “there was a lot on the line and a lot of pressure.”

Bettinelli-Olpin said that, for example, in the letter they wrote to Campbell, “it was like, this movie doesn’t exist without you, full stop. We’re not trying to make it any other way.” (Asked what would have happened if any of the actors had declined, Gillett said, “We said that there would be a plan and then never explored what said plans were.“)

Williamson said he also had a conversation with Campbell while she was considering the film. “I don’t think this is her favourite genre to watch,” he said. “But she wanted my viewpoint and I told her the truth — I didn’t want to be part of it, and then I couldn’t imagine it happening without me.”

The invitation was particularly delicate for Arquette and Cox, who were asked to act out a story in which their Scream characters have split up, in circumstances mirroring the couple’s real life.

Outside the Scream films, Cox and Arquette continue to co-parent their 17-year-old daughter, Coco, and to share a personal shorthand. At one point in the video interview, when Arquette’s audio was garbled by a digital glitch, Cox joked, “It’s been so long, I can’t understand him anymore.” Arquette chuckled and replied, “I’m sorry, I’m mumbling.”

Asked if she hesitated to take the film because of its personal parallels, Cox answered, “I had no apprehensions. I was just so happy to be working with both of them.”

But Arquette acknowledged that being in a movie with Cox again was inherently awkward. “It’s been 25 years of our lives,” he said. “We’ve grown up together. We have a child together.” He explained, however, that he could not pass it up: “It’s a cathartic experience to just be able to act opposite Courteney.”

When the cameras rolled on their first scene together, it was a tearful moment, and not just because the script called for it. Cox said of Arquette, “He got very emotional while he was filming it. He said the next day the crew didn’t look at him.”

By way of explanation, Arquette gamely acted out the process of ripping out his still-beating heart and holding it in his hands. “I could tell some people aren’t comfortable with that level of emotion,” he said.

Arquette, who also provided the directors with some personal photographs of himself and Cox that were used in the movie, said the “Scream” shoot was often a moving experience for him. 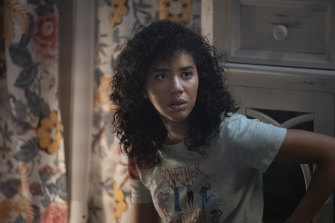 Jasmin Savoy Brown in a scene from the new Scream.Credit:AP

“There were moments when I felt Wes’ spirit around a lot. There would be a wind blowing and I’d see Courteney’s hair move back. And then it’s just like” — he made an exaggeratedly mournful weeping noise. “It made it really easy to tap into those feelings,” he said.

There will of course be conversations about further entries if this Scream hits its targets, but for now, its veteran leads are satisfied to have carried their characters to the quarter-century mark.

Campbell said she was grateful to have played a horror-movie protagonist who is never depicted as a helpless victim. “I’m very lucky, as a woman, to have gotten a role where people come up to me and say, ‘Sidney Prescott inspired me — Sidney Prescott made me more courageous, made me less insecure, made me stand up for myself,’” she said.

Cox preferred to draw more pragmatic lessons from her Scream experience and the shifting identities of the people who have donned its telltale mask in each installment.

“There’s a deeper meaning to the fact that anybody could be Ghostface,” she said. “What it’s taught me is that you don’t go into a parking lot, ever, at night. You don’t go to the bathroom in a movie theatre. And anybody could go off the deep end.”

This article originally appeared in The New York Times.

Scream is in cinemas now.