‘This family dynamic is so unique, we are really the only experts in the field’

For most gay guys the conventional norms of marriage, kids and a white picket fence are quickly traded for discos, champagne, and big screen premieres of Ru Paul’s Drag Race. Although the latter are some of the prodigious perks of gay life, the idea of family life has always remained remote for most due largely to the many legal, social and biological obstacles.

Yet, when the same-sex marriage movement started gathering momentum in 2011, it ignited my desire for kids and a family of my own. 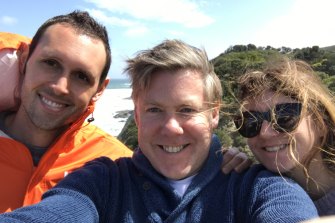 Alastair McKenzie with his partner, Chris, and their co-parent, Jane.

I thought my first hurdle was getting my partner on board, but Chris’ response was, “Sure, let’s do it!” It turned out Chris and I knew a few people in the throes of having their own children through commercial surrogacy abroad, one couple doing this in India, the other Thailand; both successful.

They were supportive in helping us navigate the options available in Asia for surrogacy but soon both doors were closed to gay couples. This only left the expensive and risky US market or the impractical altruistic Australian market. With fewer than 60 Australian surrogacies a year and given our own sisters were less than forthcoming with any offers, it was apparent that finding an altruistic surrogate would be unlikely for us.

Despite the elation of impending parenthood and all the joy and anxiety that it brings, we are also acutely aware of the challenges we are yet to face.

Based on my experience and our original criteria I felt a known donor would be the most workable for us, as it would eliminate custody and financial risks and all support and access is by parental negotiation rather than statute. It did require us to be more vigilant with selection, as it was critical to find someone with whom we could build trust with quickly. We found Jane.

I caught up with Jane first and we hit it off, so we organised a “dinner date” with Chris the following week, which coincidently was the same date as the announcement of the marriage plebiscite. Things went well and it was clear Jane had thought this through and had a very similar approach to parenting as us: super organised. She had written down a set of her key questions which impressed us further. We even agreed baby names, Thomas and Alice.

We really clicked and it was then that we realised that we were ready to take one giant leap of faith. Over the coming months we met with friends and family and began our IVF journey. That part of journey has not been unique: it was long, full of hope and heartbreak.

One day in April I had a call from Jane, she asked me to go into my laundry and under the sink there will be a box, sure enough there was a box that had been planted under my sink. Inside was a beautiful package wrapped up with a bow, I opened it and inside was a 000 baby onesie with the words, “See you in 8 months Dad and Daddy, love Tomalice.”

The emotion was palpable. I was going to be a father. We had done it. I cried for the first time. She is now 29 weeks pregnant with our healthy twins (we opted not to know the sex, because we really just needed a surprise after the past 6 years).

Despite the elation of impending parenthood and all the joy and anxiety that it brings, we are also acutely aware of the challenges we are yet to face.

So far, we have worked very well together and make a great team but, despite widespread support, we have had to face some disappointing reactions from a few in the family and some friends and work colleagues, including judgment about the way we have gone about our journey. This will be a reality that our children will also face and we will need to build the requisite resilience in them too.

This family dynamic that we have created is so unique, that we are really the only experts in this field. So, the only advice we need is like that of any prospective parent: tell me how to change a nappy or burp my kids!

I hope that our story inspires other aspirant gay dads to take a leap of faith and seek out someone special to share their parenting journey with. It has been so fulfilling and has changed our lives for the better. Gay men make great uncles but, I think we can make even better dads.

Alastair is a guest on SBS Insight’s episode Inconceivable airing at 8.30pm on Tuesday, 22 October on SBS and SBS On Demand