Thousands of hectares approved for projects that made koalas homeless

Destruction of more than 200,000 hectares of threatened species habitat has been approved by the federal government in the past decade, new research by the Australian Conservation Foundation shows.

The research found that in the five years to 2016, approved projects affected 80,000 hectares of threatened species habitat which increased to 120,000 hectares in the following five years. 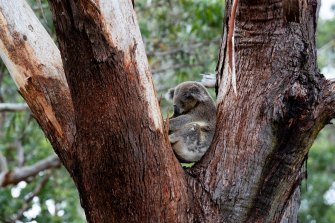 Koalas were added to the federal list of endangered animals earlier this year.Credit:Janie Barrett

It also found that 94 projects had been approved by the government that destroyed 25,000 hectares of koala habitat between 2011 and 2021, while other projects given the go-ahead affected thousands of hectares of greater gliders, swift parrots and spot-tail quolls habitat.

Earlier this year, the koala was made an endangered species in NSW and Queensland, where populations have fallen by 60 per cent and 50 per cent respectively.

Mining, transport and residential development were the primary reason habitats were cleared.

“It shows how over the last decade, rather than protecting our most vulnerable and beloved native animals, the federal government has been aggravating extinction. Sadly, Australia is a world leader in annihilating nature.”

Since colonisation, about 100 of Australia’s unique flora and fauna species have been wiped off the planet, including 34 mammals. The rate of loss, which is as comprehensive as anywhere else on Earth, has not slowed over the past 200 years.

Last week, an audit found the federal Environment Department did not know if its plans to halt Australia’s wave of flora and fauna extinctions were working. The department oversees the Environmental Protection and Biodiversity Conservation Act, which requires the government to identify threatened species and make plans to help them recover.

“There is limited evidence that desired outcomes are being achieved, due to the department’s lack of monitoring, reporting and support for the implementation of conservation advice, recovery plans and threat abatement plans,” the report said. “Failings identified in previous audits had not been fixed and there is “no schedule or plan for future evaluations”.

“Most recommendations from past evaluations and reviews have not yet been implemented,” the report said.

Mr Abrahams said the ACF report and the audit highlighted that the government was failing threatened species at both ends of the spectrum.

“On the one hand, the government is willingly destroying their habitat, and at the other end, they are failing to develop the plans to recover them, or if a plan is developed, they are failing to check if having any impact,” he said. “We are on a road to disaster with our natural environment if we continue with this business as usual [approach]. This has got to be a wake-up call.”

Professor Martine Maron from the University of Queensland’s School of Earth and Environmental Sciences Faculty of Science said current policies, including the EPBC, were not working given the ongoing decline of species.

“We’ve got to do something different if we’re going to stop things like koalas getting up-listed just 10 years after they were first listed as vulnerable,” she said. “We know we can make things better … we know what we need to do, we know we can improve the situation but the level of effort is not enough.”

A spokesperson for federal Environment Minister Sussan Ley said it was a fundamental part of the EPBC approval process that projects likely to have significant impacts on species protected under the Act were fully assessed.

“This desktop survey looks at one aspect of the approval process only,” the spokesperson said of the ACF research. “It does not take into account final determinations, offset requirements or the provisions put in place to protect species, nor how much clearing may or may not ultimately have taken place.”

A guide to the environment, what’s happening to it, what’s being done about it and what it means for the future. Sign up to our fortnightly Clear Air newsletter here.