Thrifty father reveals how YOU could save more than £2,000 a year

Thrifty father-of-three reveals how he saves £2,000 a year and even gets money off his utility bills – just by scanning his supermarket receipts

A thrifty father-of-three has revealed how he saves more than £2,000 a year using four shopping apps, that he checks on during his lunch break.

Peter Chatfield, 39, from Deal in Kent, scans receipts for bread, milk, yoghurt and chocolate into the apps to claim back part of their cost – and even does this twice when two are running the same offer.

He estimates that he makes £500 in profit from cashback a year, as well as saving £1,500 through special offers.

The civil servant started counting the pennies seven years ago after his wife Sharon, 39, fell unexpectedly pregnant with their third child just after they had moved into a four-bedroom detached house.

Revealing his savings secrets, Pete told FEMAIL how he monitors the apps Clicksnap, Checkoutsmart, Greenjinn and Shopmium for the latest supermarket offers. 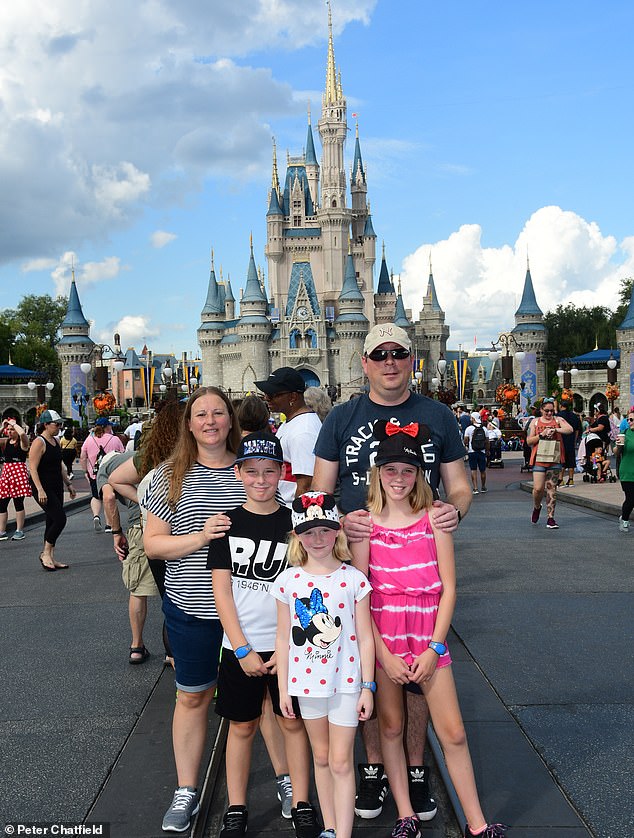 Peter Chatfield, 39, from Deal in Kent, claims that he saves by scanning receipts for bread, milk, yoghurt and chocolate into the apps. The money saved enabled the family to take a dream holiday to Disneyland Florida in October. He is pictured with wife Sharon, 39, and children Cara, 10, second right, George 9, second left, and Amy, 6, centre

‘It will tell you which goods are on offer and then you go to the supermarket, buy the item, take it home and scan in the receipt. In the same day they send you the money,’ he told FEMAIL.

‘You’re looking at a minute tops – it takes no time at all.’

Sometimes the apps have the same offers at the same time, allowing Pete to cash in twice for an item and put himself into profit.

They also give him the option of shopping in either Tesco, Sainsbury’s, Morrisons, ASDA, Waitrose or going online to shop with Ocado.

How to get five months free fibre broadband with NOW TV

Pete raked in five months free fibre broadband from NOW TV Broadband by using an offer from a cashback site and his bank.

The refund means Pete only has to pay £14.17 a month, or has five months internet completely free!

On Uswitch NOW TV Broadband was not the cheapest deal, with Origin Superfast Fibre offering only £20 a month internet, but when all the offers were added up the more expensive one ended up saving him more. 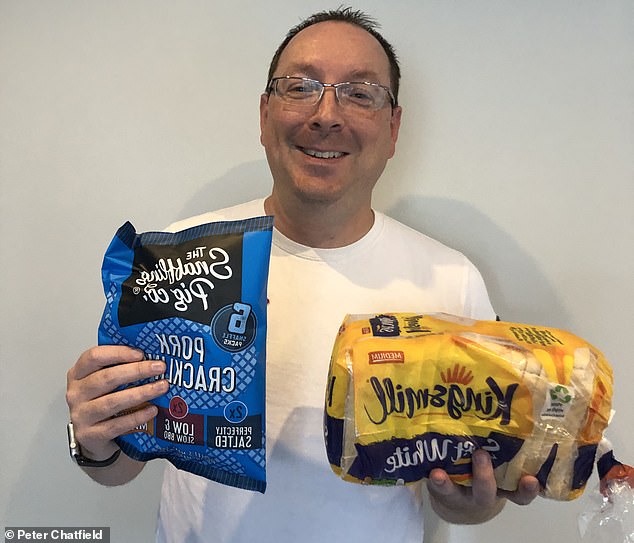 The civil servant said he uses offers on Clicksnap, Checkoutsmart, Greenjinn and Shopmium. On the day of the interview he had used them to save when buying bread and a bag of crisps

‘Clicksnap and Checkoutsmart basically have the same offers where you can submit your receipts for both and then you get paid for both.

‘The obvious items are usually free but sometimes about half price or a bit over – so you can end up in profit.

Four cashback apps that could save you more than £2,000

Shoppers at Tesco, ASDA, Sainsbury’s, Morrisons and Ocado can save money with this little-known app.

It features exclusive offers every week. When FEMAIL checked it offered 75p cashback for Yeo Valley yoghurt buyers, worth £2.75, and £1.15 back for those buying Yorkshire Tea bedtime brew, worth £2.30.

Shoppers at Tesco, Asda, Morrisons, and Sainsbury’s can make savings with this app.

When FEMAIL checked it was offering Jude’s ice cream reduced to £1.50, worth £4, and free beef jerky, worth £3.20. It also had deals on Yorkshire Tea bedtime brew and Yeo Valley yoghurt.

Waitrose, Tesco, Sainsbury’s, Holland & Barrett and Ocado shoppers should use this app.

Downloaded onto your phone, when FEMAIL checked it had 60p off Fruit’n’Fibre cereal, worth £2.79, and 40p off Galbani Mozzarella Maxi cheese, worth £2.25.

Tesco, Sainsbury’s, ASDA, Morrisons and Waitrose shoppers can take advantage of this app.

When FEMAIL checked it had 50 per cent off Uncle Ben’s One Pot Rice Kit Caribbean Jerk, worth £2.79, and 70 per cent off Morrisons Toffee Apple Crown pastries, worth £1.

‘One time I got about 60p back on bread through an offer on both apps, so it made me a 20p profit plus free bread.’

Pete said he reckons he makes ‘well over’ £500 in profit a year through this loophole.

‘If you’re doing all the offers you could probably make £5 to £10 a week just from that’, he said. ‘That’s once you’re getting your free stuff as well.’

The government worker checks the apps during his lunch breaks at work at least once a week, because the offers switch around every week to two weeks.

To rake back in even more pounds, Pete also takes advantage of offers on cashback websites Quidco and TopCashback.

This year, he managed to pair two offers to save £130 and get NOW TV Broadband for free.

After buying the £25-a-month internet, he got £90 refunded through TopCashback and then a further £40 from his bank Santander for choosing the company.

The money saved has allowed the family to take the trip of a lifetime to Disneyland, Florida.

Glowing pictures show the thrilled couple and smiling Cara, 10, George, 9, and Amy, 6, in front of the Disney Palace and meeting Mickey and Minnie Mouse at the Animal Kingdom.

‘The flights were far cheaper because  we went in October. So, for us it was £1,400 whereas usually peak time you’re looking at over £2,000.

‘I got cashback through Topcashback for car parking for the car hire, we also got some money back as new customers through Airbnb and travel insurance again was with cashback.’

He took the children for a week during their October half-term and then a further week off that was authorised by the school.

Pete’s job has made it almost impossible to get away over the summer, because of preparations for a supposed no-deal Brexit, which didn’t come to pass. 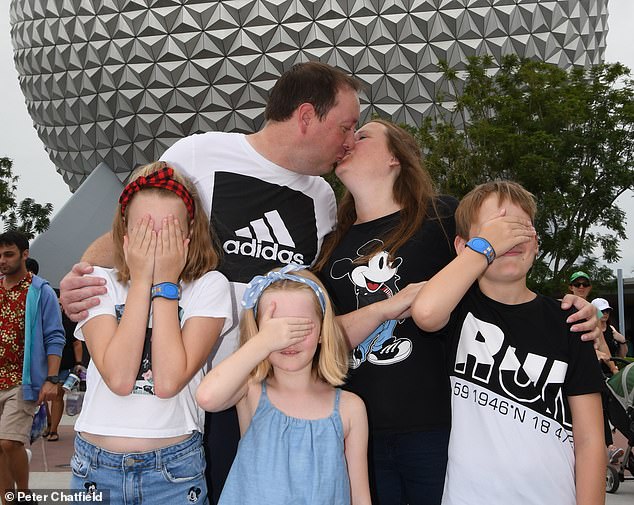 Pete, pictured kissing wife Sharon in Disneyland Florida as the three children cover their eyes, got into saving after his wife fell unexpectedly pregnant with their third child and they had just moved into a detached four-bedroom house at the top of their budget 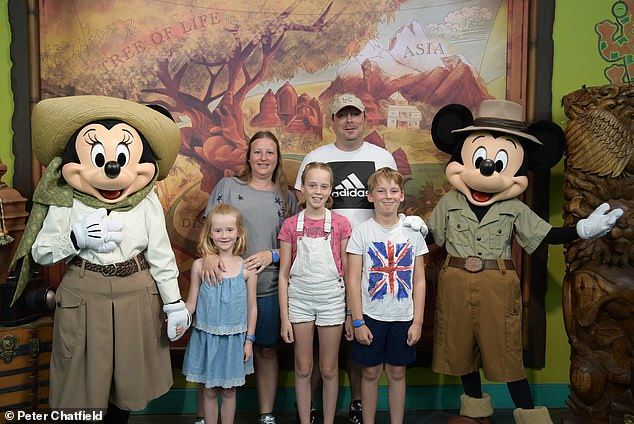 The family enjoyed a dream holiday to Disneyland, pictured here in the Animal kingdom with Mickey Mouse, after they saved £2,000 on the yearly shop and made a further £500 when cashing in on a deal offered by two apps

Money saving app ZipZero will transfer one per cent of your total bill back to you to spend on utility bills.

After scanning a receipt in on any purchase made in a UK shop, it then immediately makes the money available for gas, water, electricity or another household utility.

With a head office based in London, on its website ZipZero says: ‘We founded ZIPZERO because we wanted to find a way to help households get out of the rut of making ends meet.

‘For us, paying zero for our monthly bills is everything.’

The family started saving when they were ‘really struggling financially’ – and haven’t stopped since.

‘I was desperate to cut bills and make some extra money’, said Pete, ‘ that’s how I fell into it.’

Pete said that since starting to save the extra money, the quality of life of his family has been improved.

‘It’s something I enjoy but, you know, it’s taken a lot of financial stress off us so we can relax a lot more’, he said.

‘My wife is really impressed that I go through these apps, but sometimes rolls her eyes.’

So pleased with his savings, Pete launched blog Household Money Saving where he tells fellow savers about his expert tips for cutting bills on everything including wifi, testing websites and reviewing adverts.

How do I begin saving? Pete’s advice for those just starting out 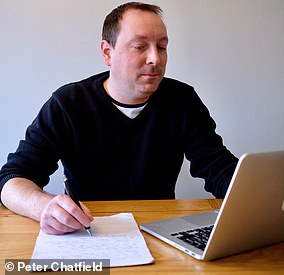 Thrifty father Peter Chatfield, 39, has explained how families should slowly ease themselves into money saving.

‘Aim small first because that’s how you do it’, Pete told FEMAIL.

‘People look at these things and think, “oh that’s a tiny saving what’s the point?”, but when you add these things up over a day, over a week, and over a year you know it all adds up.

‘It doesn’t take much effort and anybody can do any of these things so yeah – start small.’

Pete claimed he had saved more than £2,000 a year since starting, and has even made £500 profit a year when he gets extra money back for buying products.

He achieves this by scanning receipts into apps Clicksnap, Checkoutsmart, Greenjinn and Shopmium.

Since getting into saving he has also set up a blog called Household Money Saving where he tells followers how to save on purchases.