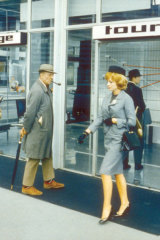 One of the weirdest entries in the Jim Henson catalogue is this 1982 all-puppet fantasy, a pocket epic that follows an elfin hero (voiced by Stephen Garlick) on a quest to redeem a dying planet. Casting a morbid spell reminiscent of David Lynch's Dune, it's a unique technical achievement. Digitally projected. Astor, Sun 3 November, 1pm.

The first feature in a decade from Palestinian writer-director Elia Sulieman (Divine Intervention) sees him once again playing “himself” as the mostly passive, silent onlooker of a string of absurdist vignettes. The loose plot takes him gradually further west, echoing his real-life experience as an artist best-known outside his homeland. Screens as part of the Palestinian Film Festival, with short Area C. Cinema Nova, Sat 2 Nov, 6.30pm.

Sometimes verging on abstraction, Johannes Roberts’ sequel to his 2017 shark attack movie 47 Metres Down is a pure, rather beautiful example of genre as ritual. The story follows four young women on a journey to the underworld, in the form of a submerged Mayan city where danger lurks. General.

Matt Bettinelli-Olpin and Tyler Gillett's horror-comedy combines bloody slapstick with satire of the 1 per cent. Australia's Samara Weaving is a bride terrorised on her wedding night by her moneyed in-laws, among them Andie MacDowell and Adam Brody. General.