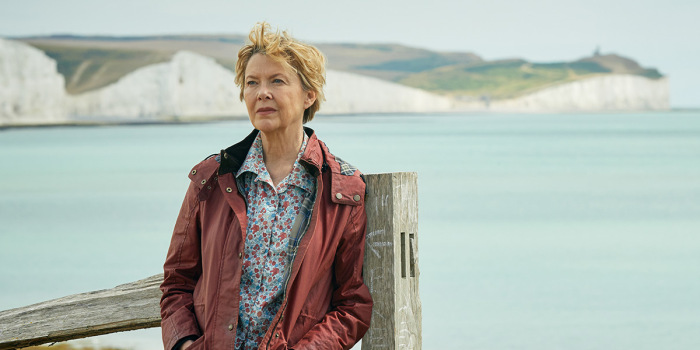 In “Hope Gap,” Annette Bening plays a fiercely intelligent but not nearly independent enough English housewife who has been toiling away on a project for years. A lover of literature, and poetry in particular, Bening’s character Grace is compiling a book of verses for the full range of human experience. She intends to call it “I Have Been Here Before,” and it will serve as a kind of life preserver for the dejected and depressed, reminding that no one is experiencing hardship for the first time, and that others more eloquent have managed to put those feelings to paper, signaling the way through for all who follow.

Writer-director William Nicholson intends “Hope Gap” to work in much the same way. Slow and stuffy, like a filmed play, but also considerably more nuanced and mature than your typical relationship drama, it’s the story of a marriage that ended almost entirely out of the blue after the couple had been together for 29 years. Except the split wasn’t unexpected; it had been telegraphed in tiny ways almost every day for decades, until at last, it came to a head, and the husband (played by Bill Nighy) left, enlisting his son (Josh O’Connor) to help Grace cope with the separation. It’s a difficult prospect, inspired by the divorce of Nicholson’s own parents, and the filmmaker navigates it as sensitively as possible in order to be fair to both parties. In the process, his characters’ pain, and also their resilience, serve to let others know they’re not alone.

That’s a noble aim, I suppose, but a rather dreary one for audiences seeking escapism, rather than a suicide hotline — which, incidentally, is where Grace volunteers to work, channeling her newfound cynicism into a kind of surly commiseration with those worse off than she feels. Woe is the soul who suggests “Hope Gap” as a date night. A film like this is better watched at home, curled up beneath the quilt with a pint of Cherry Garcia and a box of Kleenex.

More than just the metaphorical discrepancy between Grace’s expectations and the reality of her marriage, “Hope Gap” is an actual place, a scenic stretch of cliffs in Sussex, facing south toward France. It’s a perfectly lovely spot to throw oneself into the ocean — and don’t think that hasn’t occurred to Grace, although she’s none too keen about scraping her face across the white chalk limestone on the way down. Grace and her husband have shared a house not far from the cliffs for decades, firmly entrenched in their routines.

Grace never finishes her tea. Edward comes home, makes a cup for himself and retreats to his desk on the other side of the house. Edward is a history professor who spends his evenings “wikiing” (correcting articles on Wikipedia), which inspires one of Nicholson’s many fuddy-duddy riffs on how modern society seems out of sync with his obsolete characters: “If you make a history mistake in a Wiki article, you click undo and revert it.” (There’s an even more groan-worthy one later, about paying with a chip-equipped credit card: “It’s all contactless now.”)

Nicholson is a gifted writer with an impressive list of credits that includes “Unbroken,” “Gladiator” and “Les Misérables” (nearly all of which were co-written, which makes his contributions a bit tricky to parse, although more can be told from his C.S. Lewis biopic, “Shadowlands,” based on his own play). He gives in a bit too easily to showing his wit, which is backed by a kind of earnestness that can be uncomfortable to watch — at least to the extent that “Hope Gap” is personal, a reflection of what his parents went through.

Grace adopts a dog and names it after her husband. A detail like that would be corny if someone had made it up, but here it’s just heartbreaking. In the weeks to follow, whenever their grown son Jamie comes home, he finds her sitting on the hall stairs, as if waiting for Edward to return. Again, brutal. He doesn’t let his father off easy (Edward waits until he falls for someone else — the mother of one of his pupils — before finding the courage to leave), nor does he begrudge the man his newfound bliss. When Grace confronts the other woman, the stranger matter-of-factly replies, “I think I thought there were three unhappy people, and now there’s only one.” The final dagger.

What has Jamie lost, raised in a household without real love between his parents? They felt it once, maybe — although a story about how they met (on the wrong train) suggests their son is the only good thing to come of the marriage. And even he seems stunted in matters of romance and home-building, judging by his life back in London. How much of himself has Nicholson put into Jamie? “I never asked myself if she was happy or what she was thinking,” the young man shares early on — although casting Bening, who seems to have looped her English-accented lines, as his mother seems like the highest compliment, and the actress is excellent in all her bedraggled desperation. In any case, it seems like Edward was equally uncurious about a wife he took for granted, a wife who gets on his nerves.

“You go for him,” Jamie reproaches her.

“He should fight back,” she says. “I want a reaction.”

What she wants is reassurance. Something has been not right about their marriage for ages, and Edward is too mild-mannered to address it. We’re used to seeing Nighy play salty, extroverted characters, garrulous and good-natured, but Edward is like an old ficus, bent over by years of badgering. The more Grace picks at him, the more he retreats … until such time that he has backed himself out of the marriage entirely. Grace wants them to stay together, but it’s clear that neither Jamie nor Nicholson shares that view. The marriage has run its course. It happens. And where do people turn when it does? Well, now they’ll have “Hope Gap” to cling to — proof that someone has been here before.

A mum's treasured ring has been found in a sewer 15 years after she lost it while filling up her car with petrol. Retired police officer Sarah Warfield is amazed her grandmother's long-lost wedding ring was discovered by drainmen flushing out the sewer next to the garage. Sarah, 59, lost the 9-carat gold ring when it slipped off her finger […]

END_OF_DOCUMENT_TOKEN_TO_BE_REPLACED

END_OF_DOCUMENT_TOKEN_TO_BE_REPLACED
We and our partners use cookies on this site to improve our service, perform analytics, personalize advertising, measure advertising performance, and remember website preferences.Ok