There’s a moment in Here We Are Amongst You, the latest work by Rawcus Theatre, when the actors stand still in a circle, facing out towards the audience. It’s designed as a moment of connection, which for some of the cast means making eye contact, for others using body language, and for some, saying something. 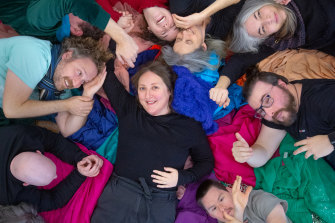 At this point in rehearsals, Joshua Lynzaat, one of the ensemble looks at me – and I mean really looks at me: we hold each other’s gaze for 10 or 15 seconds, smiling. It’s simple yet powerful and reminds me how rarely that sort of moment happens between complete strangers.

Rawcus Theatre is a 14-strong ensemble “with 14 different opinions of how we describe ourselves”, says founder Kate Sulan.

Describing who they are is not easy, she says: “What we’ve landed on is 14 diverse minds, bodies and imaginations.”

Their bold and innovative, often award-winning, shows are devised by all members, with Sulan creating a structure around the ideas conjured by the ensemble; the works incorporate dance, theatre and visual arts.

Opening at Arts House next week, Here We Are Amongst You explores connection and coming together. A joyous celebration, there’s an irony in the theme, as the work marks the end of an era: Sulan is leaving after 22 years at the helm.

In 2000, commissioned to create a performance for the National Cerebral Palsy Conference, Sulan was already working making theatre with people with a disability; she regularly saw people who were clearly artists. 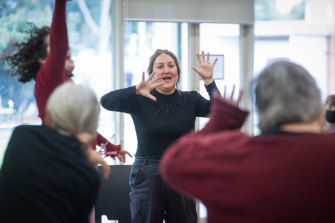 In the diverse group she brought together to perform at the conference, there was so much energy and excitement about creating work, the consensus was “we need to do more”. And so it continued, on a project-by-project basis, which then received a little funding, then some organisational funding, then multi-year funding. There was never a formal plan to establish an ongoing group.

“What is lovely about the organisation is it grew out of people’s desire to keep making work with each other; the company grew around that desire to make work and collaborate,” Sulan says.

The ensemble chose the name after brainstorming the qualities of the group. “There’s a raucousness and an exuberance that’s in the room but also that idea of being raw and authentic and exactly who we are,” says Sulan.

Back in 2019, when Here We Are Amongst You was first mooted, discussions centred on how a show “designed to be a gift for the world” would look. 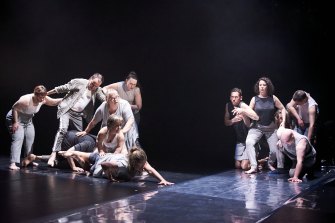 “We talked about our interconnectedness, what happens together, belonging, rest and pause, and breath and stillness,” Sulan says, as well as “generosity and how we can be with difference with grace and care and kindness”.

Asking the same questions again in 2020 and 2021, even with the pandemic irrevocably altering our lives, the ensemble found the original concept reverberated more than ever. 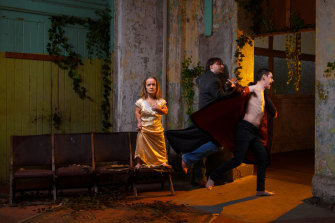 Rawcus’ Song For a Weary Throat at the Melbourne Festival in 2018.Credit:Sarah Walker

Sulan’s approach to making art has always been about large groups, and what happens with people in groups. She studied theatre at the VCA and, as well as running Rawcus, has worked with Geelong’s Back To Back Theatre, Malthouse Theatre, Melbourne Theatre Company, Stuck Pigs Squealing, The Women’s Circus and Melbourne Fringe.

After more than two decades, Sulan has decided it’s time to hand the baton over.

“It’s a real privilege to work with people over a long time because you form a creative language with each other and you spur each other on,” she says, adding that it’s a bittersweet decision. Two co-artistic directors, Katrina Cornwell and Morgan Rose, will take the reins in July.

Asked about highlights, Sulan cites working with choreographer Mark Brew in San Francisco on Glass in 2019, and Side Show in 2004, the first work with what would become the current creative team.

That said, Sulan is proud of everything the group has created. “Any time you’ve dreamed something and you get to see it come into being, it’s pretty special,” she says.

“I still feel deeply in love with the company and the ideas and the art, so I want to leave with that …” Sulan says. “I’m excited for them as to what happens next; I’m a cheerleader for life.”

Here We Are Amongst You is at Arts House, North Melbourne, from June 29 to July 10.