Green, 30, from Thurmont, Maryland, is a fraternal twin who gave birth to identical twins – Brynlee and Brianne – on Aug. 24. She told Fox News that her whole pregnancy was a “shock.”

Green explained that she had given birth to her son Cason in September 2019. She and her husband Brandon had “a little bit of trouble” getting pregnant the first time.

“We never thought we would get pregnant again,” Green said.

That shock was doubled when she found out she was having twins in January.

Green explained that because of coronavirus restrictions, Brandon couldn’t be with her at her doctor’s appointment.

“When they told me it was twins, I told the doctor, I said, ‘We have got to call my husband because he’s not going to believe me,’” Green said, recalling the moment. 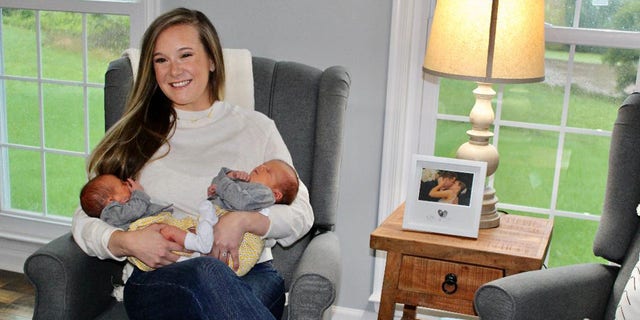 Stacy Green, 30, from Thurmont, Maryland, is a fraternal twin who gave birth to identical twins — Brynlee and Brianne —  on Aug. 24.
(Courtesy of Stacy Green)

She said when she did tell her husband, “his jaw basically dropped.”

“I was obviously scared, but I was so excited,” Green said about how she was feeling when she found out.

“Even though I’m a twin, I never thought in a million years that I would have twins myself because I was always under the assumption that it skipped a generation,” Green added. “I’ve never seen two generations of twins. It’s possible, but I’ve never seen that.”

The chance of having identical twins is 1 in 250, according to the U.K.’s National Health Service (NHS).

After she told her husband, Green called her fraternal twin sister, Stefany Sweadner.

“I already love being an aunt to Cason,” Sweadner told Fox. “He’s the light of my life. And then having twin nieces is such a blessing.”

“I really hope they have this special bond that Stacy and I do,” Sweadner said. “We have literally done everything together.” 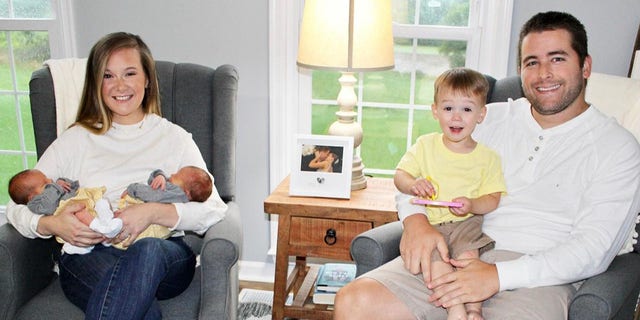 Green and her husband Brandon (right) were "shocked" when they found out Green was pregnant just a year after their son Cason (pictured in Brandon’s lap) was born.
(Courtesy of Stacy Green)

Sweadner explained that she and Green – who are both social workers – currently work at the same job together.

“We were roommates in college and everything,” Sweadner said. “So we hope that the girls are as close as we are.”

Green ended up giving birth at Frederick Health Hospital – the same place where she and Sweadner were born.

Aside from Sweadner, Green’s family was also “shocked” that Green, a twin, was having twins. 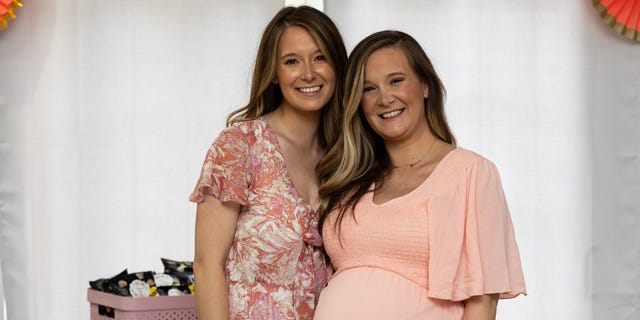 Meanwhile, Green’s parents joked that she was getting her “payback.” Jokes aside, Green’s mom and mother-in-law have been “a huge, huge help,” Sweadner said.

As for Cason, he is excited to have two sisters, Green said.

“He is obsessed with them,” Green said. “I think he loves knowing that he’s a bigger brother. He is in love.”

Green added that she and Brandon are also thrilled with their expanded family.

“I’m very blessed,” Green said. “We both are just over the moon, so happy and ready for this chapter of raising children.”