As The Age foreshadowed this week, Shaun Leane has been moved out of cabinet and St Albans MP Natalie Suleyman and Northern Metropolitan region representative Enver Erdogan will be elevated to the frontbench. 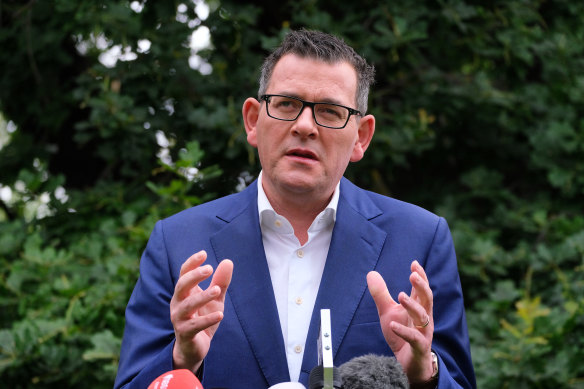 The Labor caucus meeting at the Victorian Parliament came after a group of seven MPs from the ALP’s Right faction – including Treasurer Tim Pallas and Major Events Minister Steve Dimopoulos – shifted to the Socialist Left, giving the premier’s faction a majority within the party room.

The major factional realignment was a blow to the Australian Workers Union component of the Right and threatened the group’s cabinet ministers: Natalie Hutchins, Colin Brooks, Danny Pearson, Jaclyn Symes and Shaun Leane.

The allies arrived together at Friday afternoon’s meeting.

Only Leane, who held the veterans and Commonwealth Games legacy portfolios, was moved out of cabinet and will return to his previous position as president of the Legislative Council, where he represents the Eastern Metropolitan region.

Andrews said Leane was highly regarded and well respected by his colleagues and crossbenchers.

“He’s someone who gets things done. He’s a fair person, and someone who can perform that role very well.”

Former upper house MP Jaala Pulford announced her resignation from politics a few weeks before the election, leaving the government with one vacancy on its frontbench.

The premier said the portfolios for his new cabinet would be announced on Monday and was hopeful that upper house MP Harriet Shing for Eastern Victoria, the Minister for Water and Equality, would be re-elected.

“I won’t make any predictions about these things … Those who attended today are those who are in front, or those who we think likely, but we just have to wait and see how those outcomes unfold,” Andrews said.

Rapturous applause could be heard from outside the door when Andrews arrived with Deputy Premier Jacinta Allan about 3.10pm.

Earlier on Friday, Treasurer Tim Pallas said cabinet reshuffles could be a “traumatic” time for ministers uncertain about their futures.

“I’m worried about all my ministerial colleagues. I think it’s a traumatic time for all members of Parliament as the issues around who gets what ministerial position are being worked through,” Pallas said.

He said he decided to defect to the Left with the six other MPs because the party was at its best when united.

“And as we’ve seen increasingly, there’s a move to unity. [There are] a lot of people, of course, in the party who I call friends, and it’s good to be in a room full of friends.”

Asked about the defections to his grouping, Andrews said he had not attended a factional meeting for 12 years and was “much more concerned with getting on with delivering for every single Victorian”.

The lower house seats of Preston, Pakenham, and Bass are still too close to call, but ABC election analyst Antony Green called Hastings on the Mornington Peninsula for Paul Mercurio on Friday afternoon, after the former actor extended his lead to 51 per cent on a two-party preferred measure.

Green has also called the neighbouring seat of Mornington for the Liberals.

Pakenham is on a knife-edge with the latest two-party preferred figures from the Victorian Electoral Commission putting the Liberal Party’s David Farrelly ahead of Labor’s Emma Vulin by just five votes.