A broken arm didn't stop Tyne-James Organ wearing his heart on his sleeve on this night.

There was an emotional intensity about the 23-year-old from Wollongong that made one hate to think how he might have got the injury, which left a cast covering all but the thumb and forefinger of his right hand. He didn't tell us. 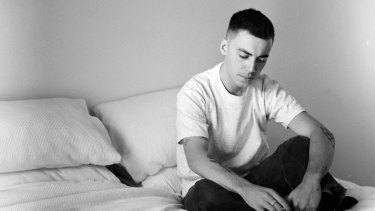 Luckily, those two digits were all Organ needed to pluck the spectral electric guitar chords of his most affecting ballad. Arriving mid-set, Watch You Go got the reaction of an encore, thanks to the hurt that still lingered in lyrics about his dad's passing from cancer in 2016, with the added frisson that mum Jane was in the room.

Organ has released only another six of his own songs since. Most of them were memorable on this night, helped by his big, soulful, earnest voice that has shades of Liam Gallagher and Post Malone, but with a defiant rasp and facility with falsetto that makes it as distinctive.

Latest single Something New was a stadium-sized belter, Organ's three-piece band helping his two strumming fingers get the room jumping.

Who knows if the bitter break-up it describes is the same one as in the soaring Say No More, which Organ told us he wrote amid a heartbroken retreat from Sydney, but clearly his personal relationships are a goldmine for raw, arresting songs.

Sadly not everyone in this room always seemed to agree or care. An intense, beautiful new soul ballad called Burning Desire was ruined by bar chatter competing with Organ's solo performance. Even a new one with the band, Strangers, got ignored by half the crowd, although in fairness it never quite coalesced into the dancer that Organ had promised us.

There was no attention deficit for opener Not Ready For Love, the most radio-ready of the unreleased material, nor for I'll Get By, the almost-as-powerful sequel to Watch You Go, while a rollicking take on The Cure's Friday I'm In Love showed off the technical brilliance of Organ's singing.

But it was the performance of his biggest hit to date, Graceful, that pointed most to Organ's potential. With him stripped to a singlet and hips swaying, this was the sort of infectious, heartfelt pop moment that one wanted to grab with both hands.