The slow, hard contest in this election campaign was obvious in its opening moments when the two rivals for power did everything they could to avoid an explosive clash.

The first day of the official campaign began with both sides following an old election template – Scott Morrison running on his record and warning of the risk of change while Anthony Albanese promised a better future. 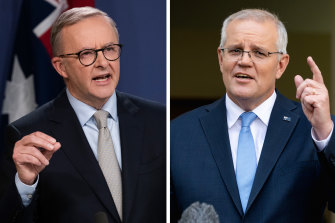 Scott Morrison, right, is running on his record and warning of the risk of change while Anthony Albanese is promising a better future.Credit:Rhett Wyman, Alex Ellinghausen

The campaign began in an utterly different way three years ago when Morrison went on the attack in the opening hours by unveiling his estimate of a $387 billion tax burden over 10 years from hugely ambitious Labor policies on income tax, negative gearing, franking credits and more.

That estimate shaped the opening days of the last election campaign by making the argument all about the sheer scale of the Labor agenda under Bill Shorten, but the “big target” is no longer there and that means everything else has to change.

The central decision from Morrison is to drag out the campaign until the last possible day, May 21, in the hope that Albanese will not be able to withstand weeks of questions about what he offers.

A government estimate of the cost of the Labor agenda is certain at some point, but its absence at this stage suggests the Liberals believe they can turn the heat up slowly.

This made the opening day underwhelming. Morrison spoke of his proven experience and acknowledged that some voters would see “flaws” in his government, but he presented his team as the safe option.

“It’s a choice between a government you know and a Labor opposition that you don’t,” Morrison said.

He did not utter the words “now is not the time to turn back” but he echoed the language he used three years ago to present his rival as a threat. The problem was that he did not have a large, frightening Labor tax agenda to make this a major point of drama.

Albanese described himself as a “working-class lad” who grew up as the child of a single mother. He spoke about his background for good reason, given 20 per cent of voters are still undecided about him in the Resolve Political Monitor.

The message from Albanese was that he has always been able to get along with people from workers to union leaders – an effective line when the Prime Minister is being given so many free character assessments by his own side of politics.

Neither leader mentioned the war in Ukraine in his opening remarks to voters even though so many challenges flow from the crisis in Europe and its implications for millions of lives, the global economy and Australian security.

Both were almost entirely focused on domestic issues, apart from Morrison’s mention of the world being less stable than at any time since World War II. This is a modest start to a debate about foreign policy and national security that deserves to be a significant element of the campaign.

But it may take time for the campaign to reach any intensity. Morrison needs every day of this campaign, given the opinion polls show he starts in a losing position, but he also believes being patient worked for him three years ago.

Morrison said as much to voters in Perth during the last campaign when a Liberal supporter urged him to stop Shorten from becoming prime minister.

“Can you nail the bastard in three weeks?” the voter asked.

“Do any of you remember that show that Andrew Denton used to run, used to have political interviews? It was called Enough Rope,” Morrison replied. “Well, that’s what I think I’ll give him.”

This is the great calculation behind the Coalition campaign: that Albanese cannot last the distance. The Coalition camp is so sure that Morrison is a disciplined campaigner, given his success last time, that it counts on Albanese stumbling once the formal campaign is under way.

This is why so many assume a relentless personal attack on Albanese because it is only rational to think this is the way the Coalition tacticians will try to rattle the Labor leader. It may be all they have left.

Yet Albanese has kept Labor together for three years while deflecting attacks from Morrison and steadily turning the tables on the Coalition. Perhaps that means he will prosper in a slow campaign.