‘Most of what I bring home we eat’: Utah mother-of-four says she saves up to $300 a month DUMPSTER DIVING for food, soap, toys, and clothes – and insists her kids think it’s ‘awesome’

An incredibly frugal mother-of-four from Utah says she makes her family meals using ingredients she finds in the trash — and insists her kids lover her hobby of dumpster diving.

Homemaker Stacey Cole, 33, saves $300 a month by digging through trash, where she finds everything from food to soap to party supplies.

‘We are extremely frugal and don’t have any shame in picking through rubbish to get good, useful stuff to enrich our lives,’ she said. 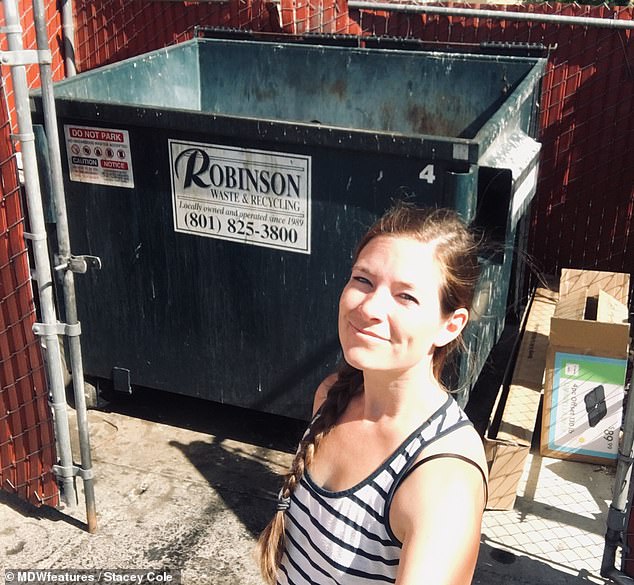 Wow! Homemaker Stacey Cole (pictured at a local dumpster), 33, saves $300 a month by digging through trash, where she finds everything from food to soap to party supplies 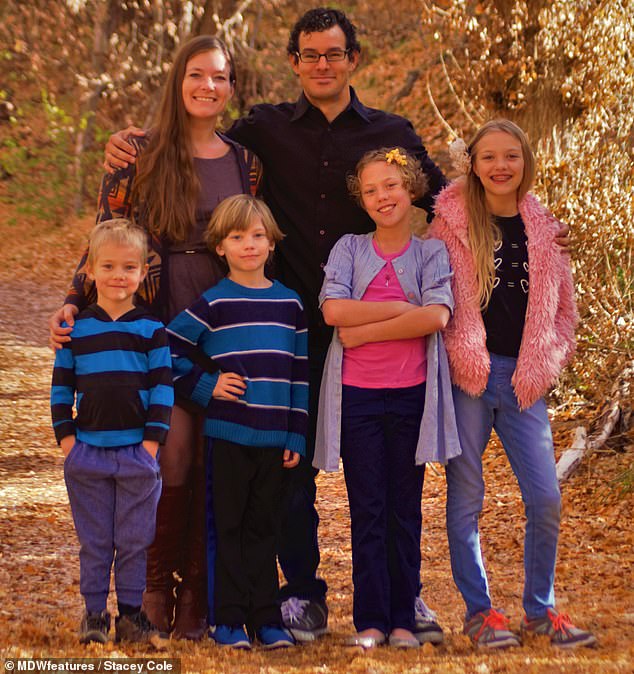 Habits: Stacey grew up in a frugal household, and has adapted similar ways of living with her family — whom she insists love her dumpster diving ways 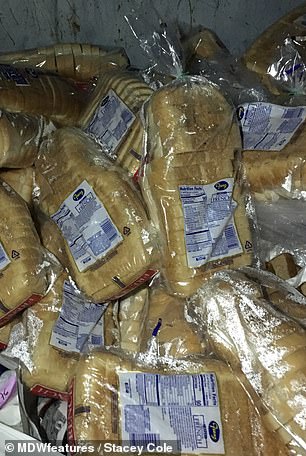 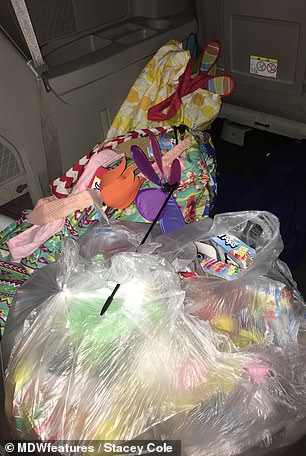 Since April 2019, she has been diving into bins, collecting many ‘useful’ things, including bread (L) and toys (R) that people have discarded

Cole was brought up in a tight knit family who lived a very frugal lifestyle. She remembers re-using items discarded as a child with her father and fell in love with frugal living.

‘We didn’t waste anything and sometimes we barely made ends meet,’ she said.

‘But my parents worked hard for everything they had and that made it more valuable and precious. My parents were experts at taking what others discarded and using it to create a beautiful, full life for all of us.’ 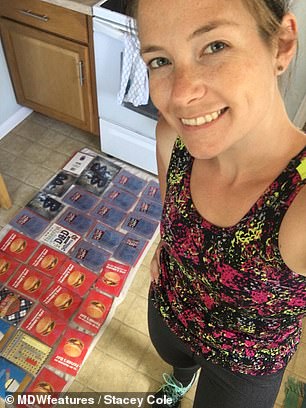 Happy: ‘Being frugal is really the only hobby I have, aside from working out and I’m just fine with that,’ Stacey, pictured with many greeting cards she found in bins, said

As an adult she picked up this habit.

‘It felt wrong to do anything differently than what I was taught. Wasteful, entitled mindsets always confused me. People threw away hours of their labor by simply having a disconnect from the fact things equal money,’ she said.

But her first husband wasn’t too keen on her lifestyle — which caused a rift between them.

‘I was married to a man who didn’t really understand this mindset, so we had issues with those differences. But I am divorced now and remarried to a man that is one hundred per cent my teammate and celebrates those things with me.’

However, she has since remarried to another man, Danny, 35, who embraces her hobby.

Since April 2019, she has been diving into bins, collecting many ‘useful’ things that people have discarded.

Her children, River, 12, Molly, 10, Thomas, 8, and Wesley, 6, all love what she finds during her nights spent dumpster-diving.

‘We also sell some things to have some “fun money” for eating out, activities, entertainment, etc. This is a crucial supplemental income. It varies a lot, but we seem to have enough for a little fun each month,’ she said.

‘Being frugal is really the only hobby I have, aside from working out and I’m just fine with that. I would not buy the things I find, more often than not. 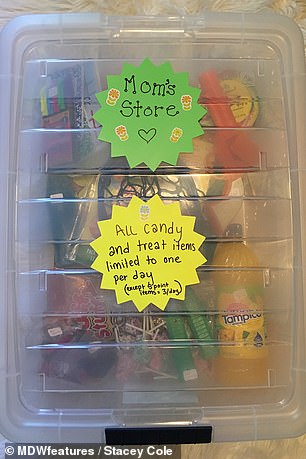 Treats: She keeps a box of sweets full of candy she has retrieved from the dumpster

‘As far as usable items I find, I would wager I save us at least fifty to three hundred dollars a month on things we need, such as a new vacuum or dish soap and toilet paper.’

She has also sold numerous items she found in bins online including soap, toothpaste, decorations, party supplies, clothing, and toys.

‘I’ve sold things at yard sales; I sell items on a website called KSL. I give items away we don’t use but someone else could use. I give items as gifts for many occasions,’ she went on.

‘I give items to friends and family who could use them and even have some request I look for specific things.

‘We use household goods every day found in dumpsters. I find boxes and bags and totes that are used to organize these items and give them away. I’ve donated a lot to goodwill and a local food bank.

‘It’s a very fulfilling hobby so I feel amazing contributing in this way to our family’s well-being and finances.’

She also said she gets a ‘rush’ whenever she goes dumpster diving, but promises things are thoroughly cleaned before they’re used. 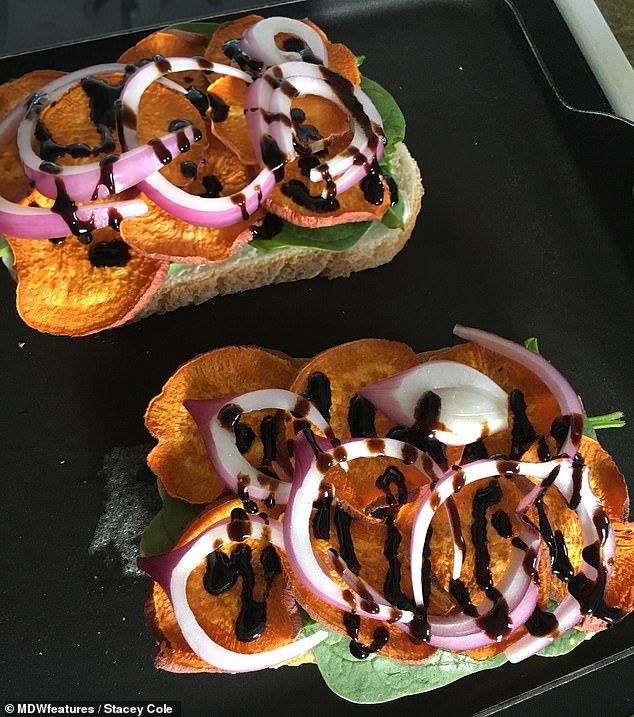 Voila! Stacey’s four kids think ‘its pretty awesome’ that she gets stuff from the trash, and ‘ask every meal if something’s come from a dumpster’ 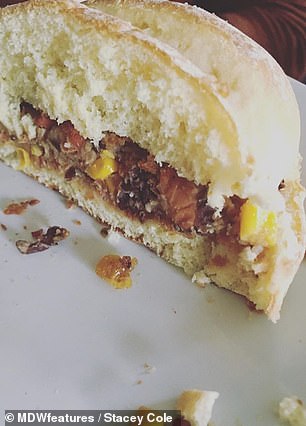 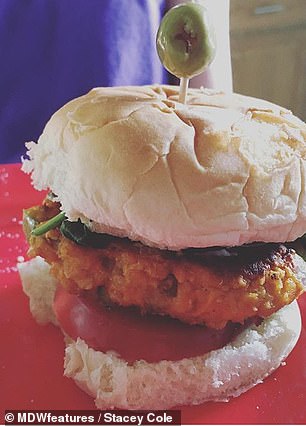 Difficult: ‘I haven’t managed too many meals with food from dumpsters because most grocery type stores have trash compactors so you can’t dive there,’ she said 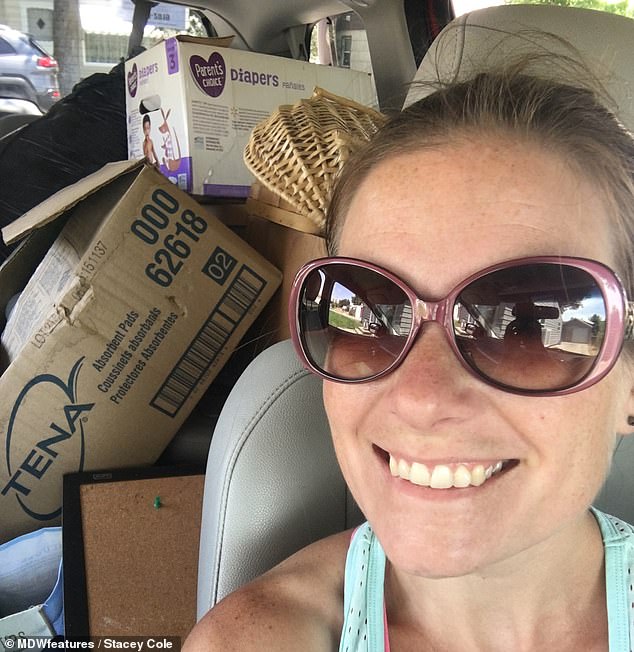 Spreading the word: Stacey (seen with boxed of items she fished out of a trash can) said she wants to show others that a frugal way of living is just as rewarding as ‘having it all’

‘I clean it all and throw out anything that seems contaminated. But most of what I bring home we eat; the kids love that we have candy in the house. I’m not willing to buy that stuff,’ she said.

Her kids think ‘its pretty awesome’ that she gets stuff from the trash, and ‘ask every meal if something’s come from a dumpster’.

‘I haven’t managed too many meals with food from dumpsters because most grocery type stores have trash compactors so you can’t dive there,’ she added. 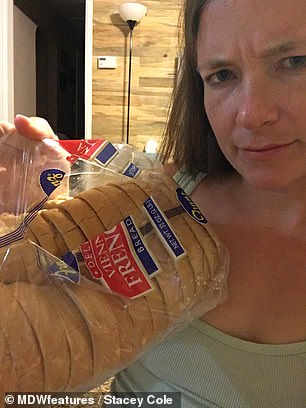 Helpful: Pictured with bread she found in a bin, she said: ‘I want people to see just how great life can be if you’re a little resourceful’

Stacey says that the process of dumpster-diving has been a challenge sometimes due to having to go at night to avoid run-ins with workers outside supermarkets, but she loves it.

‘I go at night to avoid running into anyone working there (when they’re closed). I park where I am allowed to park and not in “employee only” parking,’ she said.

‘I also close the doors, if there are any around the dumpsters, so people can’t just see me diving. It’s just better to avoid all that so they don’t lock a dumpster that I love to dive in.

‘Everyone knows me for my frugality; they usually have to hear about my finds on some level if they are family or friends. I think most of them don’t mind.

‘I don’t think my family understand it entirely. My mom and dad do the most because they’ve been doing similar things all their lives. I’m sure diving at businesses for food creep people out.

‘I hope to convey that a simple, frugal way of living is just as rewarding, or more so, than “having it all”. I save tons of money each month to put toward more important things and I live a crazy rich life.

‘I help people in need, and I help reduce waste. I want people to see just how great life can be if you’re a little resourceful.’