Vaccinated Australians will avoid lockdown restrictions once we hit 70% target

Vaccinated Australians will be able to avoid some lockdown restrictions once 70 per cent of the eligible adult population have got two doses, and international border rules will be loosened to allow more people to come home.

Once the national total hits 80 per cent, broad lockdowns will not be used in major cities, caps on returning Australians will be abolished and all restrictions on vaccinated travellers leaving the country will be removed. 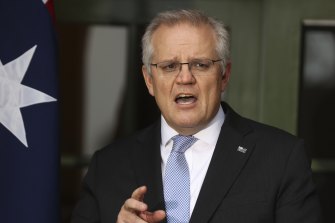 Prime Minister Scott Morrison said national cabinet had agreed to the plans on Friday afternoon after considering scientific modelling from the Doherty Institute and economic advice from Treasury.

Mr Morrison said lockdowns would continue to be used to deal with COVID-19, but the national plan would give Australians a clear path out of the restrictions. Under the plan, states will have to individually hit the target vaccination levels as well as the nation. The special rules for vaccinated Australians will be considered by a working group made up of the Northern Territory, Victoria and Tasmania.

The Prime Minister said the lesson from dealing with the Delta strain was that “early and stringent lockdowns” are necessary to deal with outbreaks, and that would be kept in mind during the suppression phase.

But once the vaccination targets are hit Mr Morrison said states would open up.

“I can tell you there is no state or jurisdiction in the country that wants to apply a lockdown or hold Australians back,” he said.

The plan includes four phases: suppression, transition, consolidation, and the final phase. Australia is currently in the suppression phase, but will move to the second phase when the 70 per cent target is hit.

In the transition phase, the goal is to minimise serious illness, hospitalisation and deaths from COVID. Mr Morrison said lockdowns will be less likely but still possible. Restrictions will be eased for people who are fully vaccinated because they are less of a public health risk.

There will still be inbound passenger caps but they will return to previous levels for unvaccinated travellers, and have higher caps for vaccinated returning Australians. There will also be a limited entry of student and economic visa holders allowed.

Once the 80 per cent target is reached, all Australians who are vaccinated will be able to return to the country, caps on students and economic visa-holders will increase, and the government will seek to set up travel bubbles with other countries.

Mr Morrison says he’s been greatly encouraged by the take-up of the AstraZeneca vaccine over the past month, and in all states not just NSW.

“If you want to get vaccinated, the AZ vaccine is there for you, it is a highly effective vaccine, as we’ve seen all around the world.”

The Prime Minister had previously praised NSW Premier Gladys Berejiklian for refusing to lockdown during a Delta outbreak that has now spread around Sydney, but now said he didn’t have “perfect hindsight”.

“People were acting on the information they had. No-one has perfect hindsight over these issues and the Delta strain is a strain that we’ve sought to understand and learn and react to and respond to,” he said.

“We’ve all humbly learned from these things, and then we make the adjustments and get on with it.”

University of Melbourne professor of epidemiology Tony Blakely backed the idea of a vaccination target as a way to motivate people but said the country could not ease all restrictions once the target was reached.

Professor Blakely said some of the modelling was “the right answer to the wrong question” because governments would have to offer vaccines to everyone, including children, and adjust their settings in light of the results.

A vaccination target of 80 per cent was a likely goal, he said, but new variants and further breakouts would mean that no vaccination rate was likely to allow Australia to open its borders without restriction.

“We talk about opening the borders but it won’t be to all countries all of the time,” he said.

Professor Blakely said Australia would need a vaccination rate of 90 per cent of the population to reach herd immunity, while a rate of only 50 or 60 per cent would not be high enough to avoid further lockdowns.