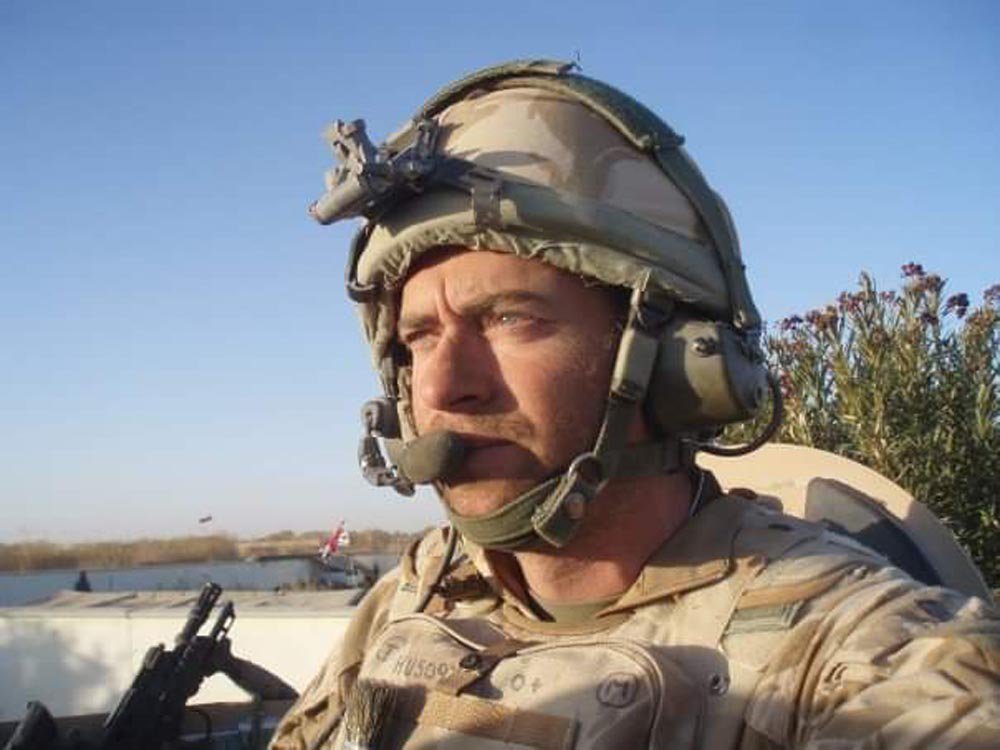 A group of five veterans with PTSD are ‘virtually climbing Everest’ to fundraise for the charity that helped them.

The brainchild of former Sergeant Major Wayne Hutchinson, 48, aka Hutch, whose 24 years in the Army included two tours in Afghanistan, the friends will be covering 5,000 miles – the distance we are from Everest – and the same 6,000-mile elevation as its peak by Remembrance Sunday, November 14, 2021.

Calling themselves ‘Five Decide to Thrive’, they met at events organised by military charity The Not Forgotten, which helps foster friendships between veterans dealing with illness and loneliness, through social activities and a ‘buddy system,’ encouraging them to stay in touch.

Now, Hutch, of Plymouth, Devon, says they aim to raise £5,000 to fund a challenge day like the event where four of them became pals, adding: ‘I wouldn’t be here if The Not Forgotten hadn’t taught us the buddy system.

‘I lost two soldiers I knew last year to suicide. They were young lads. I just can’t let it happen to anyone else.’

They then ‘adopted’ Damien Lyons, 46, after meeting him at a Christmas party organised by TNF that December.

Hutch also has fellow military charity Help For Heroes, and his fiancée, Royal Navy nurse Becky Ward, 42, to thank for the progress he has made in facing his mental health problems.

Back in 2017, he had fallen into a dark hole after leaving the Army when, plagued by PTSD, as he tried to adjust to civilian life, he drank to numb the pain.

Recognising the signs, Becky (who he described as his ‘angel in disguise’) contacted Help for Heroes in 2018.

They, in turn, put him in touch with The Not Forgotten, both of which helped him to face his demons.

‘I had money in the bank, but I was completely miserable,’ said Hutch.

‘Becky noticed right away and contacted Help for Heroes. If it wasn’t for her, I don’t know what would have happened to me.’

Hutch calls his first tour of Afghanistan in 2009 ‘life-changing’, saying: ‘It was the first time I had seen the real cost of war, both from military and civilian perspectives. It just changed me.’

And when he finally left the Army in 2017, he was haunted by the horrors from his past.

He says: ‘Anytime I left the house, my heart rate would climb. Then I would feel like I was back in training and would have a panic attack. I just stopped going out altogether.

‘I became isolated and started drinking a lot. I didn’t really have the words for how I was feeling, I just became unbearable to live with.’

With Becky’s help – and that of the charities he worked with – Hutch was diagnosed with PTSD, learned ways to express himself, and was offered support in the form of the group trip.

Although it wasn’t an ‘initial connection’ with the group of men – which Hutch puts down to social anxiety – they started a group chat and their friendship went from there.

‘Men aren’t good about talking about their feelings, and our group created a safe space for us to express ourselves,’ said Hutch, now a house husband.

‘The buddy system is lifesaving. For us, it’s changed everything. By relying on each other we can integrate back into civilian life and face our struggles head on, knowing we’ve got our friends to help us out.

‘It’s amazing to know I’ve got these four guys by my side no matter what.’

Now, through the virtual Everest challenge – most of which they will be completing in places like Dartmoor National Park – the men hope to give back to the charity that connected them.

Hutch said: ‘I picked Everest because The Not Forgotten trips cost on average around £5,000 each and Everest is 5,000 miles away, so we thought if 5,000 people donated a £1, we could hit our goal.

‘We’ve managed 3,343 miles so far hiking across our local areas and across Dartmoor National Park, to simulate the hike to Everest.’

Fellow climber Andy, who was a corporal in the Army for eight years, said: ‘The guys I’ve met now have become family to me. Their support and acceptance has been instrumental in me being able to start building a completely new life.

‘I can’t find the words to describe how fundamental their support has been, but it’s no exaggeration to say I would not be alive now if we’re not for the Not Forgotten and the friends I have made there.’

You can donate to the vets’ efforts here.

Get in touch at [email protected]