The Chinese security pact with Solomon Islands has sparked widespread concern among voters about the prospect of a military base on the islands, leading 72 per cent of voters to say they are concerned or very concerned about the agreement.

Only 21 per cent said they were unconcerned about the regional deal when asked in an exclusive survey conducted by research company Resolve Strategic for The Sydney Morning Herald and The Age.

But the outcome has not driven significant support to the advantage of one side of politics over another, with Australians split on whether Prime Minister Scott Morrison and the Coalition or Labor leader Anthony Albanese and his party are the best choice to manage the challenge.

Defence Minister Peter Dutton will debate security policy with Labor defence spokesman Brendan O’Connor at the National Press Club on Thursday after weeks of dispute over the Chinese agreement in the Pacific and sharp criticism from Solomon Islands Prime Minister Manasseh Sogavare about the government’s rhetoric.

Sogavare said this week he found it “offensive” when Australians called the Pacific their “backyard” – a word used by Home Affairs Minister Karen Andrews when talking about the region but also used by the media and by Labor disability services spokesman Bill Shorten.

Morrison revealed on Wednesday he had not spoken to Sogavare since the start of the formal election campaign despite his public warnings that China and the Solomons should not cross a “red line” by building a military base.

Albanese claimed the decision was “extraordinary” and a sign of the government’s mistakes.

“We’ll show respect to all the Pacific family,” he said of a Labor government’s approach.

Government sources said the decision not to speak to Sogavare was taken on official advice.

Asked who would do best at managing the issue, 32 per cent of voters named Morrison and the Coalition while 29 per cent named Albanese and his party, with another 28 per cent undecided. 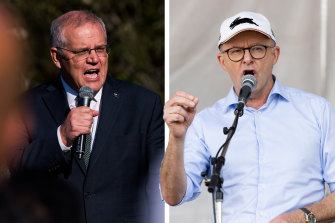 Voters are split on whether Prime Minister Scott Morrison and the Coalition or Labor leader Anthony Albanese and his party are the best choice to manage challenges presented by the security pact.Credit:James Brickwood, Alex Ellinghausen

The Resolve Political Monitor surveyed 1408 eligible voters from Tuesday to Saturday, a period when Morrison made the “red line” comment while Labor leader Anthony Albanese blamed the Coalition for “dropping the ball” on a key regional issue.

The margin of error for the results was 2.6 percentage points.

Albanese has called the deal a “massive foreign policy failure” and said he would have sent foreign affairs spokeswoman Penny Wong to discuss the agreement with Sogavare.

But Morrison used the Sky News debate on April 20 to accuse Labor of echoing Chinese criticism of the government over its response to the deal, repeating his claim in Parliament in March that Albanese was a “Manchurian candidate” who would be Beijing’s choice to win the election.

The prime minister’s attacks have incensed Labor but not shifted sentiment on national security when the latest Resolve Political Monitor is compared to questions on security issues in the past.

The Coalition has consistently led on national security and defence more broadly, with 40 per cent of voters saying Morrison and the Coalition are the best to manage the issue compared to 26 per cent who name Albanese and Labor, with another 22 per cent undecided and 11 per cent naming others.

Yet the government’s advantage on the issue has narrowed significantly in the time since the Resolve Political Monitor began in April last year, with the Coalition leading by 28 percentage points in May last year compared to 14 points in the latest survey.

Asked in the latest survey who was best to manage foreign affairs and trade, 38 per cent named Morrison and the Coalition while 29 per cent named Albanese and Labor, with another 22 per cent undecided and 12 per cent nominating others.

The government has also lost ground on this issue. It led on foreign affairs and trade by 20 percentage points in May last year compared to 9 points in the latest survey.

The Resolve Political Monitor asked respondents about policy issues by naming Morrison and the Coalition and Albanese and Labor, reflecting the fact that Australian elections have become more “presidential” and are contests between the two main leaders as well as their parties.

The question put to voters about the agreement said: “Solomon Islands is a small Pacific Island nation, near Papua New Guinea and around 2000 kilometres from Australia. It and China recently announced a security pact that may allow China to have a military presence there. How concerned are you, if at all, about this new security arrangement between China and Solomon Islands?“

The concern was strongest among Coalition voters, at 80 per cent, and slightly lower among Labor voters, at 71 per cent. It was lower again among voters in marginal electorates, at 67 per cent, although this group represented a smaller group of respondents with a higher margin of error.