A cabinet reshuffle is imminent with Deputy Premier Roger Cook tipped to lose his health portfolio in favour of something more aligned with his existing economy-orientated duties.

Labor insiders who spoke on condition of anonymity said while Premier Mark McGowan has kept his intentions close to his chest, the reshuffle would occur Friday, but it was unlikely any minister would be booted from cabinet.

Ministers were informed of the changes on Thursday night but official announcements are not expected until later on Friday.

The most significant change will occur in the health portfolio, where Mr Cook, a powerbroker in Labor’s left faction, will likely be relieved of his health duties after five years as minister and another eight as shadow minister.

The deputy premier has lost some political bark thanks to the health portfolio as the COVID pandemic agitated existing staffing and resourcing issues and saw him face off with health unions during the fallout of the death of seven-year-old Aishwarya Aswath in April.

Fellow left faction power broker and current Environment Minister Amber-Jade Sanderson is the frontrunner to take on the role, which will give her the opportunity to prove her mettle as she looks to be a future leader of the party and state.

Neither the Premier nor Mr Cook would be drawn on the reshuffle on Thursday. 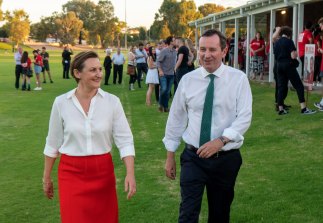 “That goes way above my pay grade. I just love my job. It’s an incredible privilege to serve the people of Western Australia and, as you know, I’ve had a passion for health for many years now,” Mr Cook told 6PR’s Gary Adshead.

When pressed, Mr Cook, who also has the state development, science, jobs and trade portfolios, said cabinet reshuffles were at the discretion of the premier.

“I picked up a couple of important economic portfolios after the last election, and I’m really enjoying that work and I hope the premier thinks I’m doing a good job in those roles,” he said.

“While my energy is high and my ideas are fresh, I’m happy to stay in the health world but look, ultimately, that is a call for the premier to make not for me.

“I just consider it a privilege to work in this role and each day I come to work. It is an absolute honour.”

Mr Cook’s removal from the role will be significant given the state’s plans to open the border on February 5 and trepidations within the health system about its ability to deal with the virus once it crosses the Nullarbor.

Australian Nursing Federation WA secretary Mark Olson said Mr Cook was knowledgeable about his portfolio but his attention to it had waned over the past year.

He said the new health minister should have that portfolio and nothing else.

“We need a tough health minster who is prepared to do the long hours, get involved, get across the portfolio and challenge the bureaucrats,” he said.

“If [Roger Cook] is not going to give up the other portfolios he probably should be moved along,” he said.