‘We like our member, not his boss’: Liberals blame Morrison for inner-city carnage

Furious Liberals lashed out at Prime Minister Scott Morrison for costing them a slew of formerly blue-ribbon seats in a “teal bloodbath” that ran through Sydney’s eastern suburbs and northern beaches.

Jason Falinski in Mackellar, Trent Zimmerman in North Sydney and Dave Sharma in Wentworth all suffered significant declines in their primary votes – double-digits in some cases – likely enough to catapult the independents Sophie Scamps and Allegra Spender into parliament. 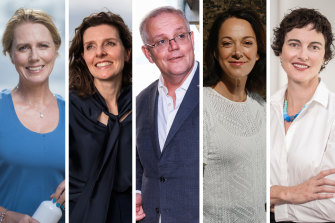 Zimmerman said there were “clearly lessons for the Liberal Party in this result” as he conceded defeat to Climate 200-backed independent Kylea Tink in North Sydney, a loss cabinet minister Simon Birmingham described as a “devastating blow”.

A leader of the Liberals’ moderate faction, Zimmerman copped a 15.5 per cent hit to his primary vote with 40 per cent of the counting completed. Labor came in third and its preferences were expected to get Tink over the line, even though her primary vote was lower than other teals.

In Mackellar, Sophie Scamps claimed victory in a surprise result after Falinski’s primary vote fell to 40 per cent in what was once Liberal heartland on Sydney’s northern beaches. Scamps polled strongly on first preferences, almost beating Falinski with 60 per cent of the vote counted.

“This is about genuinely trying to represent our community and take our voice and values to Canberra,” Scamps said on Saturday night. “We’re super excited. This is a win for democracy.”

At Sharma’s post-election shindig at Club Rose Bay, federal Young Liberal president Clark Cooley told the Herald it was “rough out there” at the booth he manned in Wentworth, with voters clear they wanted Morrison gone.

“The feedback was, ‘We love our local member, we don’t like his boss,’ ” Cooley said, referring to the prime minister.

Liberals who entered the Sharma event were ordered not to speak to the media – including elected officials, some of whom ignored that instruction.

NSW upper house member and former Liberal Party state executive official Chris Rath described the race for Wentworth as “incredibly close, in spite of the unpopularity of the prime minister”.

Another Liberal who did not want to be identified said party research showed as many as four in five swing voters were not prepared to vote for the Liberals this time because of Morrison.

While some Liberals held out hope that later booths, as well as prepoll and postal votes, might yet save them from defeat, the likelihood of that prospect appeared to diminish as the night wore on.

“The communities have seen through the ‘fake’ moderates,” Climate 200 founder Simon Holmes a Court told the ABC.

“[Former prime minister John] Howard kicked out most of the moderates and Morrison kicked out the rest. The reason the Liberal Party lost these seats is because they left a great vacuum.”

Spender arrived at Bondi Bowling Club shortly before 9pm, where hundreds of supporters gathered to celebrate what felt like a clear win. The former chief executive did not immediately claim victory, choosing to mingle with friends and campaign volunteers.

As the crowd cheered to the Black Eyed Peas’ I Gotta Feeling and Aretha Franklin’s Respect, sister Bianca Spender told the Herald that no matter the final result, “we’ve won” in Wentworth.

“The movement of really getting people to care about the climate and feel that they can make a change, it has won. Whatever happens tonight, it will never be the same again,” she said.

“Everyone is activated and once you have an activated community you can do anything. I see huge potential and everyone in the family is beaming with pride at the energy, positivity and momentum it has created.”

Spender campaign volunteer Bobbie Stent, 64, said families at the Clovelly booth seemed to be heavily in favour of Spender but it was more split at Bondi Junction, with men especially likely to stick with Sharma.

“I would ask them what it was that they wanted, and they went ‘Get rid of ScoMo’; they didn’t like him,” she said. “That was the main message.”

On Saturday morning, Sharma told the Herald while casting his ballot at Paddington Public School the narrative of the rise of the independents – one of the big stories of the campaign – had helped his opponent.

“The fact that we all talk about them and shorthand them as one campaign shows you that it’s not a bunch of different independents like it has been in the past,” he said.

“These aren’t traditional grassroots independent figures running on their own issues, they’re all running on the same issues with a pretty homogenous campaign structure.

Sharma said the phenomenon was something the Australian Electoral Commission or some other authority might have to examine after the election.