‘We must be mainstream’: Labor leaders tell conference to claim the centre

Labor premiers fresh off election victories have delivered a message to the party to go mainstream and represent the broadest possible slice of the electorate as Anthony Albanese’s team tweaked its platform to recognise coal jobs.

WA Premier Mark McGowan, who almost wiped out the state Liberal Party in the March election, said his government had achieved its successes by appealing to everyone from Labor’s traditional base of workers and tradespeople through to small business owners and professionals. 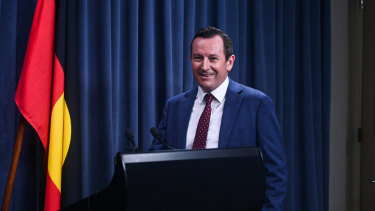 WA Labor premier Mark McGowan has pitched his historic win as the product of pitching to a broad base.Credit:Peter de Kruijff

“We should talk to the whole community, we must be mainstream,” Mr McGowan said. “A party that understands the pressures that families face right across our suburbs and our regions.”

Labor used its federal conference, which takes in the views of party officials and union leaders to produce its official platform, to clear out some of the barnacles of its 2019 election loss, including recalibrating its energy policy that some in the party feared cost votes in regional areas.

Amendments backed by unions with members in the energy industry including the Australian Workers Union and the Construction, Forestry, Maritime, Mining and Energy Union added references to the importance of coal and other mining jobs to the country.

But the party was intent on not surrendering territory on its left to the Greens either, with Mr McGowan emphasising that only a party in government can enact policy.

Energy spokesman Chris Bowen blamed the Greens for voting against Labor’s emissions trading scheme in 2009 but also took aim at the government, which he claimed “doesn’t even accept the science of climate change.”

Climate policy has been one of federal Labor’s longest-running and most vexing challenges, but Northern Territory premier Michael Gunner attempted to square the circle, spruiking his government’s renewable and gas projects as job-creating Labor policies.

He cited exports of natural gas to Japan and plans to send renewable power via a cable to Singapore.

“I know we must be cautious in translating state election results to federal voting intentions, yet Mark McGowan’s remarkable victory — provided he doesn’t use the result to go off and secede from the nation — tells us Labor is in good shape,” Mr Gunner said. “If we pitch from the middle to the middle with assuredness and certainty, it’s going to be a hectic year.”