The internet and the digital devices that connect to it have made our lives infinitely easier – from shopping and banking online to connecting with friends and family.

But if the internet was a high street it would be dominated by just a handful of massive shops – the tech giants.

These firms have huge influence over what we do and don’t see on our devices, and showcase their own apps and services over rivals. 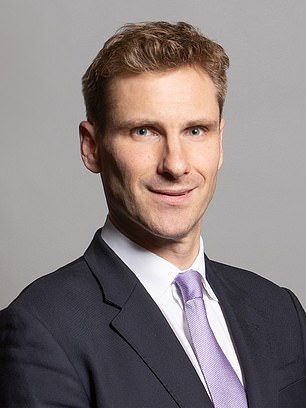 Technology minister Chris Philps, pictured, said powerful tech companies are able to charge whatever they like for online services with little oversight

This makes it difficult for smaller firms to compete – including those in the UK’s thriving tech scene.

On top of this, these powerful tech companies are able to charge whatever they like for online services with little oversight.

The Government has set up a regulator – the Digital Markets Unit – as a new watchdog to make sure the tech companies don’t abuse their power.

Today we are revealing its strict – and statutory – rules to rein in dominant firms so smaller businesses can compete.

The watchdog will stop big tech pushing aside rival software on their app stores in favour of their own products – levelling the playing field for smaller developers and putting more options in the digital shop front.

Companies falling short of the rules could face fines of up to 10 per cent of their global annual turnover. If they make a wrong move they could be forced to U-turn on their plans.

News outlets have taken a battering from the tight grip Facebook and Google have online with advertising – despite the fact it is their quality stories which often keep people engaged on their platforms. The Digital Markets Unit will get powers to intervene to make sure news organisations are paid fairly by social media giants for their journalism.

It will have the power to step in and resolve disagreements over prices.

They’ll have more power over the services they use and what companies do with their data, such as being able to opt out of targeted personalised adverts.

Switching between iOS and Android devices can be a turn-off for people because it’s a pain to move data across different systems. The Digital Markets Unit could force technology giants to make this much easier so that people don’t feel ‘locked in’ to their existing devices.

The Digital Markets Unit will help to right some of the wrongs brought about by the rampant expansion of unregulated internet companies.

The result will be a fairer and more competitive environment that will stop small businesses being stifled and British shoppers ripped off.