What it's like to stay at the wokest hotel in Britain

Fishing net carpets. Recycling bins in your bedroom. Nowhere to park the car! SOPHIA MONEYCOUTTS channels her inner Greta Thunberg to discover… What it’s like to stay at the wokest hotel in Britain

This is not a suggestion that would necessarily make my pulse race: ‘Darling, do you fancy going to stay in the word’s first carbon-neutral hotel for the weekend?’

I like the sort of posh hotels that have 12 towels per guest, a big bed, an even bigger bath, a well-stocked mini-bar and a decent breakfast buffet.

Call me spoiled, but an eco-hotel which sounds like it might skimp on the hot water and where you have to sleep on scratchy linen made from hemp? No, thank you.

So it was with trepidation that I made my way to room2, a new hotel on a quiet residential street in Chiswick, West London, which claims to be exactly that: the world’s first carbon-neutral hotel.

I say ‘made my way’. I drove, but there’s no car park at this eco hotel (‘We’d love to encourage our guests to use public transport whenever possible,’ a leaflet explains in my room), so I parked and paid on the street nearby. 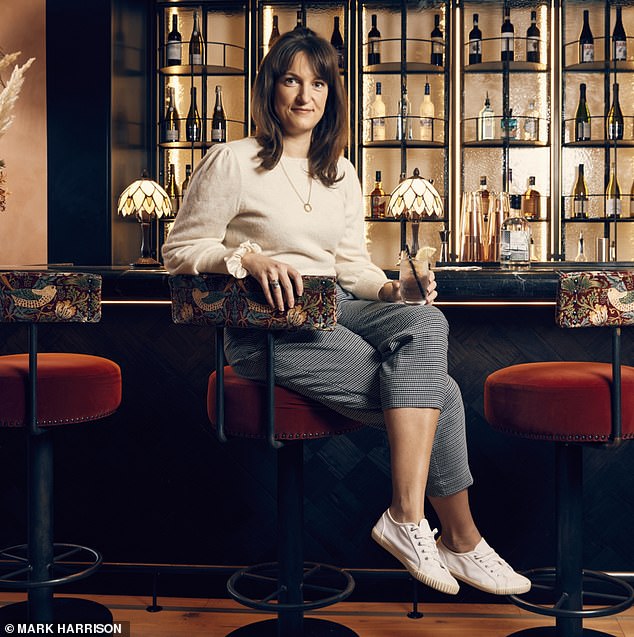 Sophia Money-Coutts gives her verdict on room2 in Chiswick, West London, ahead of its official opening in February. Pictured: Sophia at room2’s bar

Not so bad for me; I only had a small overnight bag, but if you were a family laden with multiple bags and buggies, you might feel less of a warm glow about this green initiative.

Still, at first glance, the building is impressive. Once a dull grey lump which served as the Wimpy headquarters, this has been pulled down and in its place is a four-storey red-brick hotel with large, loft-style Crittall windows which wouldn’t look out of place in New York.

I stepped through sliding entrance doors and through what appeared to be a small rainforest (a lobby filled with pot plants) to the reception area.

The interiors are surprising, too. It doesn’t look drab or joyless. The ground floor is essentially one large room: reception, plus seating and dining area.

It’s inviting and cosy. Fashionable, even. There are vast sofas, yet more pot plants, pendant lights hanging over several tables, colourful art on the walls and a long, promising-looking bar.

The hotel doesn’t officially open until February 1, but has been in its soft-opening phase since the start of the month so there are a few guests milling around, drinking tea and deliberating over a plate of muffins and brownies at the bar.

Luana Giaveri, the smiley general manager, checks me in and sends me up to my room on the third floor.

The rooms can’t possibly be that nice, I think, walking down the corridor towards mine, along a spongy red and green carpet which, I later learn, is made from old fishing nets recovered from the sea. I’m expecting something spartan and monkish; a small bed, probably quite a chilly room with no frills and certainly no mini-bar. But I’m wrong here, too. 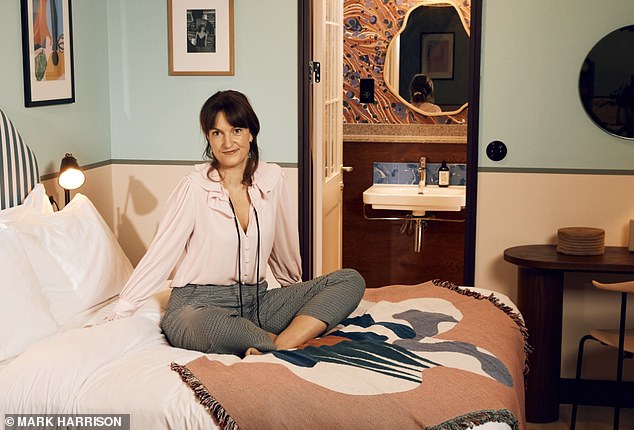 Sophia explained that her room had a kitchenette because the hotel isn’t just targeting short-term overnight guests. Pictured: Sophia in her hotel room

Some years ago, I visited Chicago to review the city’s new Soho House hotel and this room isn’t wholly different: wood floor, a large bed with a pretty blue and white striped headboard, rattan chairs, a Roberts radio and marbled wallpaper in the bathroom where there is also, and (I promise this is true) the biggest shower I have ever seen.

There are huge bottles of shampoo and conditioner in the shower made by vegan brand Doers of London. There are pretty, dried flowers in a vase (they only use dried flowers because they last, and, therefore, there’s less waste). There’s a patterned blanket on the end of my bed which is made from 80 per cent recycled yarn.

I brush my hand across a pillowcase to check the linen. Perfectly crisp. Not scratchy at all.

I open the fridge to find it’s stocked with beers from a small Yorkshire brewery, along with small bars of vegan chocolate made by a London-based company called Seed & Bean.

The only indication in the room that you’re staying somewhere uber environmentally-conscious is a large blue wooden bin containing three different chambers — for recyclables, food and non-recyclable waste. This feels like a first. Sure, I recycle at home. But when was the last time you recycled anything in a hotel room?

I also have a kitchenette — a small counter and wooden cupboards, a Smeg oven, a kettle and a sink — because this hotel isn’t just targeting short-term overnight guests, but those who might wish to stay for longer. Months at a time or more, says Rob Cahn, head of group operations, citing the nearby Chiswick Business Park as a pool of potential guests. This explains why the room2 website declares it’s not just a hotel, but a ‘hometel’ — ‘a place to live, work and entertain’. 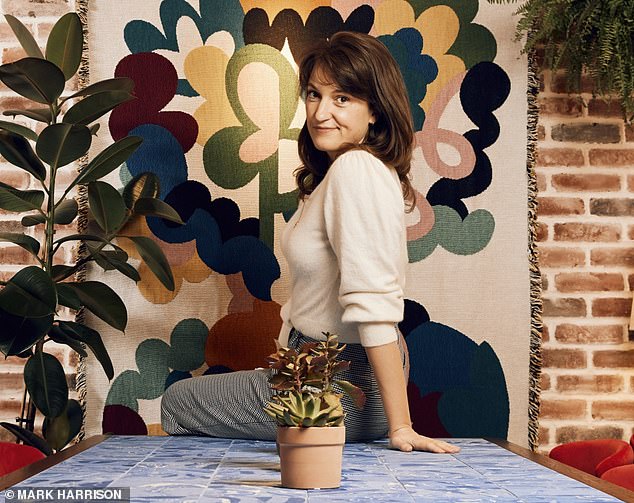 Sophia (pictured) said the entire building has been designed to create as little waste as possible, as the brainchild of brothers Robert and Stuart Godwin

Last year, they opened their first ‘hometel’ in Southampton, which has 71 rooms and the same hipster aesthetic — exposed metal pipes and wooden floors.

But it wasn’t as environmentally ambitious as the Chiswick one.

Think of your average upmarket hotel. There’s a lot of waste from people like me who use every towel when they take a bath, turn the air-conditioning up, leave the lights on, drink the bottled water on the bedside table and so on.

The Chiswick hotel aims to be 89 per cent more efficient than that, so it’s not just the 86 en-suite bedrooms and communal areas that are eco-friendly.

Work on the site started in 2019, and the entire building has been designed to create as little waste as possible. They dug down 200 metres to install a state-of-the-art heat pump, for instance.

Why so deep, I ask Keith Crawford, the hotel’s chief engineer, who explains that at such a depth, it’s possible to extract heat from the ground to funnel into the heating system. Think of the London Underground’s Central Line, he tells me, when I look confused. ‘Think of how hot it is down there. It’s the same principle with the pump.’

Every watt used comes from renewable sources and there are solar panels on the roof (along with three beehives, home to 75,000 bees, which make the hotel’s honey). These panels, along with the heat pump, provide 100 per cent of the energy needed for the hotel’s heating, cooling and hot water. 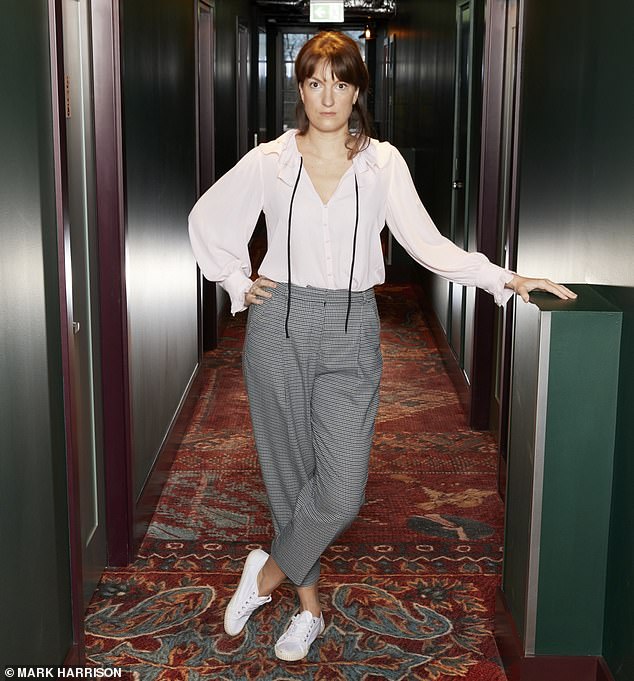 The showers, fitted with restrictors, use 40 per cent less water than your average one, but use air pressure to ensure the water flow doesn’t feel feeble. All the furniture comes from within ten miles to reduce its carbon footprint, and is made with natural, recycled or reclaimed materials.

The food has been considered, too. But this doesn’t mean it’s chickpeas and unappetising weeds foraged from pavements. The hotel restaurant is called Boca and headed up by Elisabetta Boi, an Italian chef trained at Aqua Shard on the 31st floor of The Shard in London.

The burrata comes from a Puglian in Shoreditch; the salami from an Islington butcher who uses only British meat; the coffee beans delivered in great big buckets (less packaging) from a roastery around the corner.

When it officially opens in February, the aim is that this restaurant won’t just be used by guests, but locals, too, to drop in for a sustainable dinner.

Any unavoidable carbon emissions, such as in its construction, or from food or supplies that can’t be sourced locally, are offset with a reforesting business in Nicaragua, thus taking the hotel’s carbon footprint to zero.

Later, after eating my Shoreditch burrata and homemade focaccia, I decide to test the room service and order a glass of wine.

There are no phones in the bedrooms but instructions pinned beside my door tell me I can WhatsApp a number should I require any help.

Dubious about this, I message the number asking for a glass of red wine; less than five minutes later it appears at my door (it’s delicious, but Italian, so I presume the carbon footprint from this is offset in Nicaragua, too). 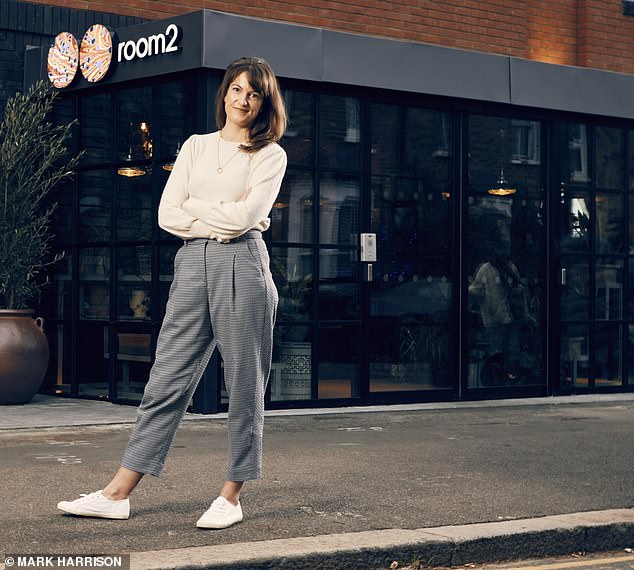 Sophia (pictured) said if you’re after a night away in a hotel which feels futuristic and innovative, this might just be the place

There are various other perks which have been designed to appeal to Greta Thunberg fans.

In the basement is an impressive gym — not large, but stocked with weights, yoga mats and two gleaming Peloton bikes. There’s also a laundry room with eco-friendly washing powder on the house for guests.

Pets are welcome, and if you book a room you get it for a full 24 hours. There’s none of that check-in-at-4pm-and-check-out-by-10am nonsense. Here, you can arrive from 2pm and check out at 2pm the following day. They’re little initiatives, but they feel forward-thinking.

John Wiltshire, the director of the restaurant, adds that they’re hoping to launch their own brand of vodka in time for the official opening, made from potato peelings and from the same Yorkshire brewery as the beers.

As for the downsides, well, if I’m being picky the hot water took a while to come through in my shower, so perhaps that heat pump takes longer to get going than a gas boiler. Chiswick might also seem a funny place to stay if you were a tourist looking to explore central London.

You’re six and a half miles from Big Ben, although the nearest tube station (Turnham Green) is a short 500-metre stroll away. But it’s also a green leafy area, close to the Thames, and the prices aren’t bad.

The average cost for a hotel room in Mayfair is £318 a night; here, a room with its own kitchenette, TV area and those free beers, starts from £123.

Sustainable tourism is a booming business. Or, at least, that’s what those in the industry hope once travel gets properly going again after the pandemic.

The global eco-tourism market was worth an estimated £135 billion in 2019 and is set to nearly double by 2027, according to Allied Market Research.

In 2022, eco-friendly hotels in far-flung places including Greece and Australia are set to open their doors, offering eco-approved sunny, sandy holidays.

Alright, Chiswick isn’t quite the same, but if you’re after a night away in a hotel which feels futuristic and innovative, this might just be the place.

Just have a think about how you get there first, because the parking situation is tricky.