Who is Farah Pahlavi, subject of the controversial book

The controversial ‘Jackie Kennedy of the Middle East’: New book revisits how Empress Farah Pahlavi made Iran the envy of the world with a £3billion art collection – but critics have dubbed her a ‘modern Marie Antoinette

She was the glamorous last empress of Iran who was known as Jackie Kennedy of the Middle East and befriended the likes of Salvador Dalí and Andy Warhol.

But many are divided over the legacy of Farah Pahlavi, 82, and consider her a modern-day Marie Antoinette who represented the worst excesses of the shah’s regime before the 1979 revolution.

The most lavish lavish parts of her legacy include an extravagant three-day party thrown in the Persepolis in October 1971 by her husband, with the couple flying in in eighteen tons of food to celebrate Iran’s 2,500th anniversary.

Meanwhile Farah was also patron of the Tehran Museum of Contemporary Art, in which she amassed an art collection, gathering modern pieces which would now be valued at $3billion.

Now her legacy has been thrown under the spotlight again with the release of a controversial new book by American curator Donna Stein, 78, The Empress and I: How an Ancient Empire Collected, Rejected, and Rediscovered Modern Art.

Detailing her time working for Her Imperial Majesty’s Private Secretariat between 1975 to 1977, she claims that male colleagues stole credit for her work and that she was largely responsible for some of the most important acquisitions. 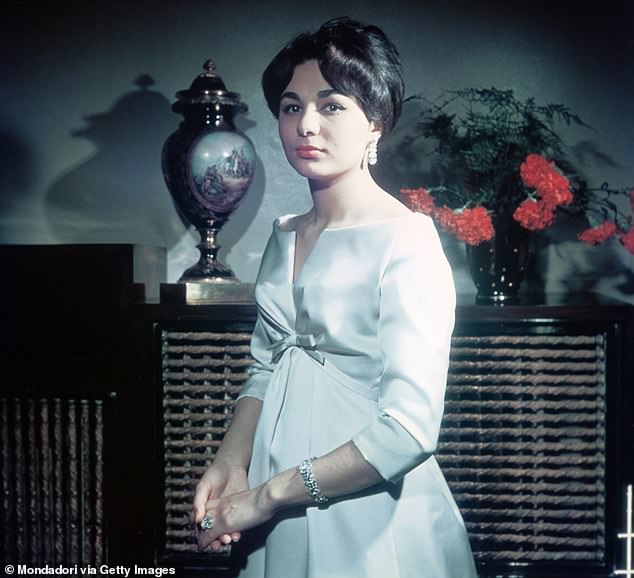 The legacy of Iran’s last Empress Farah Pahlavi (pictured) has been laid bare in a controversial new memoir The Empress and I: How an Ancient Empire Collected, Rejected, and Rediscovered Modern Art, by curator Donna Stein, 78 causing waves within the art world 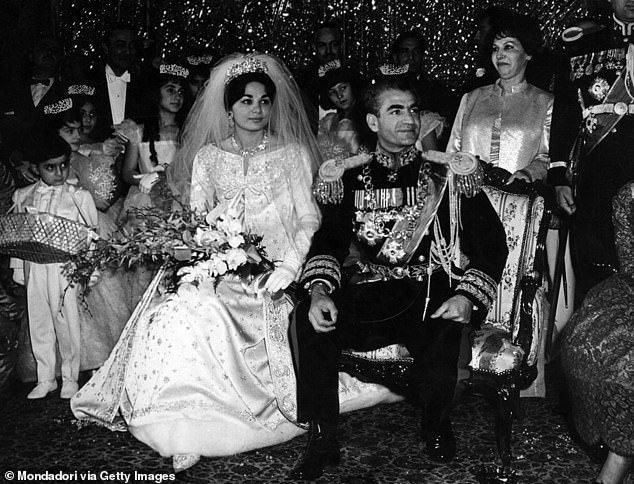 After marrying Mohammad Reza Pahlavi, Farah (pictured on her wedding day) became patron of the Tehran Museum of Contemporary Art, and set off with with a nearly unlimited budget to amass an art collection, gathering items which would now be valued at $3 billion

Farah was born in October 1938 in Tehran to an upper-class family, with her paternal side being natives of Iranian Azerbaijan while her mother’s relates were of Gilak origin, from Lahijan on the Iranian coast of the Caspian Sea.

In the late 19th century Farah’s grandfather had been an accomplished diplomat, serving as the Persian Ambassador to the Romanov Court in St. Petersburg, Russia.

Her own father was an officer in the Imperial Iranian Armed Forces and a graduate of the prestigious French Military Academy at St. Cyr.

She had a close bond with her father, who died suddenly when she was just 10-years-old, leaving the family struggling financially. 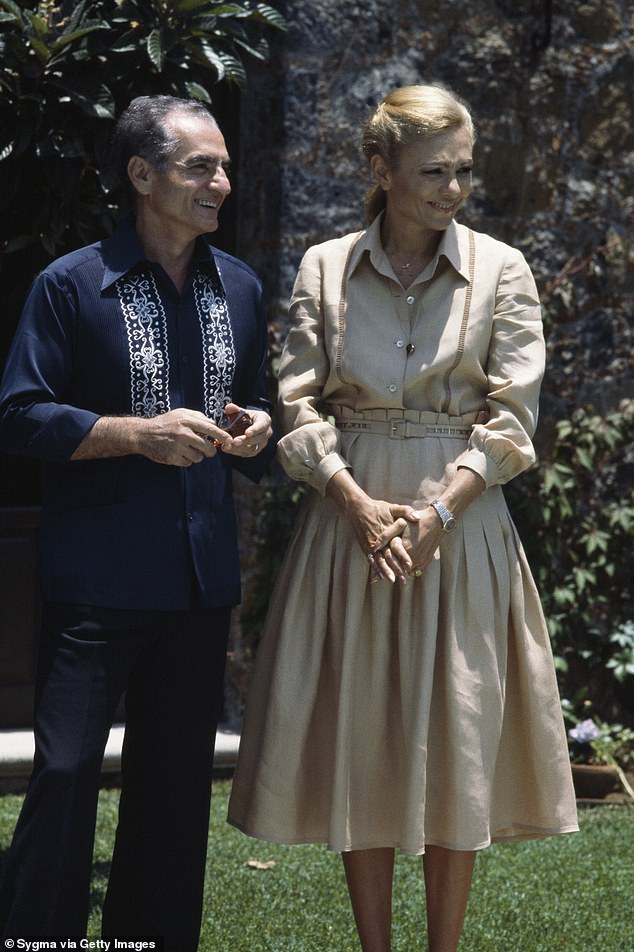 The family eventually had to feel their hometown to Egypt before embarking on a 18-month search for permanent asylum through Morocco and the Bahamas. They were eventually granted asylum in Mexico (pictured)

She was forced to move from their villa in northern Tehran into a shared apartment with one of her uncles.

Before his death, Farah’s father instilled in his daughter a love of the French language and culture.

Throughout his reign, which lasted until the 1979 Revolution, the Shah remained loyal to America and its allies, meeting with every President from Harry S Truman to Richard Nixon.

But a CIA operation to destabilise and replace the government of Prime Minister Mohammed Mossadeq in the 1950s bred anti-American sentiment among the people of Iran, while the Shah’s burgeoning oil wealth through the 60s and 70s fostered resentment against him.

In 1979 the Shah, who had already fled the country, was deposed and replaced with Supreme Leader Ayatollah Ruhollah Khomeini, who referred to America as the ‘Great Satan’.

America’s subsequent decision to admit the Shah for cancer treatment incensed Iran, which wanted him extradited and executed, and led to protesting students storming the American embassy in Tehran.

This sparked the hostage crisis which saw 52 American diplomats held for 444 days.

Despite their eventual release, the incident placed relations into a deep-freeze from which they have never recovered.

Soon she began studying at Tehran’s Italian School before moving to the French Jeanne d’Arc School until the age of sixteen and later to the Lycée Razi.

Upon finishing her studies at the Lycée Razi, she pursued an interest in architecture at the École Spéciale d’Architecture in Paris.

According to AllThatIsInteresting, her classmates described her as a ‘hard worker who studied well into the night.’

As a student studying abroad, she was invited to meet with the Shah at the Iranian Embassy in Paris in 1959 when she was just 21-years-old.

Not long afterwards, the couple began dating, before announcing their engagement on 23 November 1959.

The shah would later say: ‘I knew as soon as we met…that she was the woman I had been waiting for so long, as well as the queen my country needed.’

As a young Queen of Iran, Farah’s December 1959 wedding was the object of much curiosity and received worldwide press attention.

Her gown was designed by Yves Saint Laurent, then a designer at the house of Dior, and she wore the newly commissioned Noor-ol-Ain Diamond tiara.

Part of Farah’s appeal to the shah had been her Western education and understanding of culture.

Together, the pair claimed they would usher in a ‘golden age of Iran.’

During her time as a royal, Farah took an active interest in promoting culture and the arts in Iran.

Through her patronage, numerous organisations were created and fostered to further her ambition of bringing historical and contemporary Iranian Art to prominence both inside Iran and in the Western world.

Under her guidance, the museum of modern art acquired nearly 150 works by such artists as Pablo Picasso, Monet and Andy Warhol.

It was during this time that Stein claims she personally lobbied the chief of staff o acquire Mark Rothko’s No. 2 Yellow Center (1954); Francis Bacon’s Reclining Man With Sculpture (1961); and Roy Lichtenstein’s Roto Broil (1961). 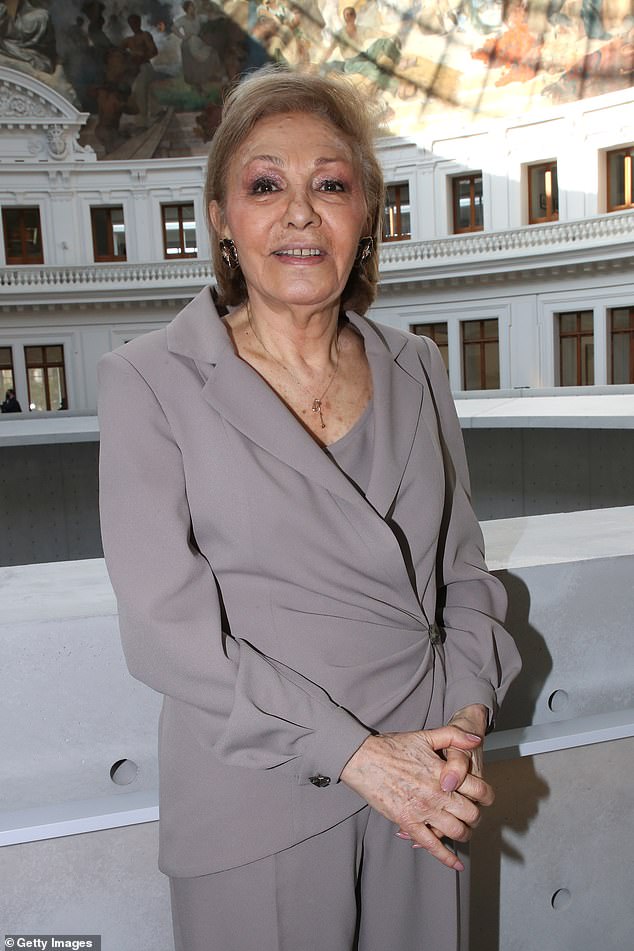 Following her husband’s death in 1980, Farah settled in the US and now splits her time between the States and Paris

Meanwhile she has also enraged former colleagues for taking credit for the museum’s historic acquisition of Paul Gauguin’s Still Life With Japanese Woodcut (1889).

In the foreword, she writes that her male Iranian superiors ‘boldly grabbed the credit for my aesthetic choices… so I have finally written to correct the record’.

According to Tatler, she wrote: ‘I was thrilled that we obtained the Gauguin, which I considered among his greatest still-life paintings.’

Eventually, Stein became suspicious that others were taking credit for her work and, after the Empress’ cousin Kamran Diba was named the TMoCA’s director, Stein felt her reputation deteriorated rapidly. 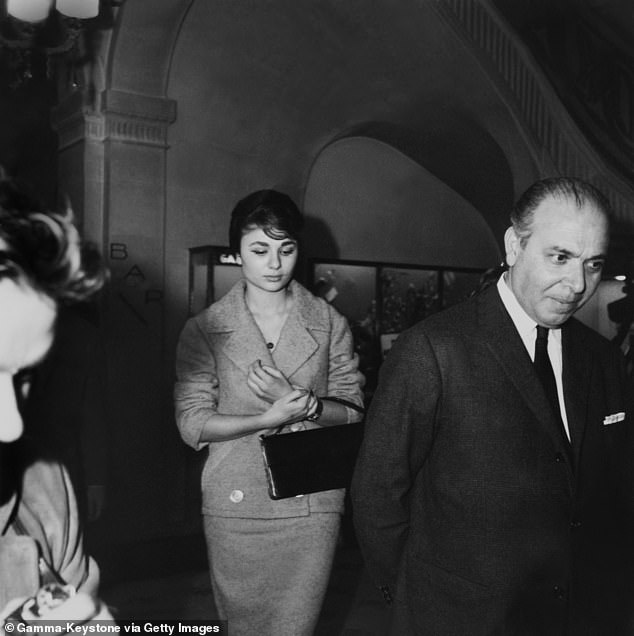 Upon finishing her studies at the Lycée Razi, she pursued an interest in architecture at the École Spéciale d’Architecture in Paris 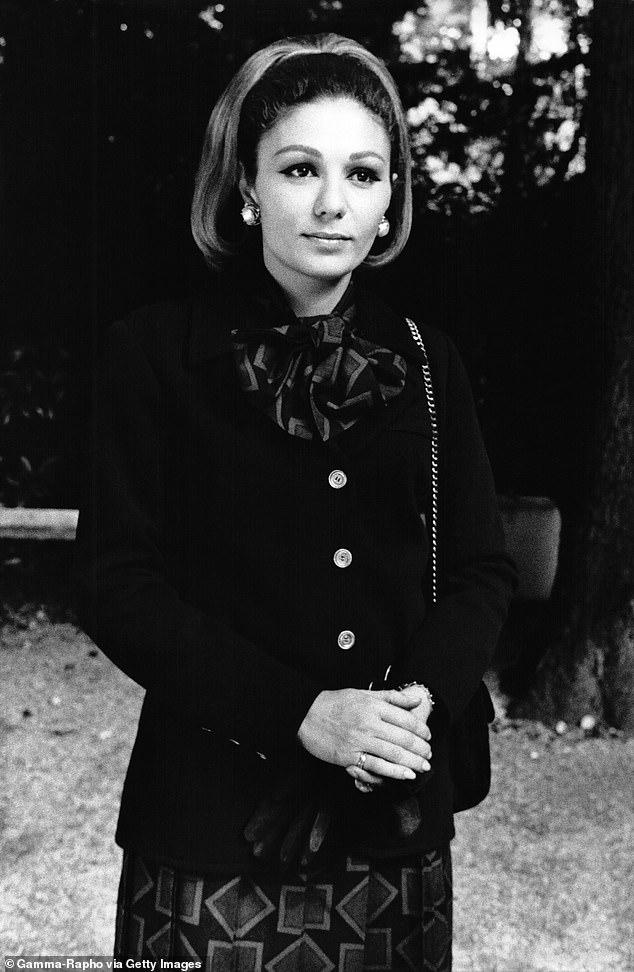 As a student studying abroad, Farah was invited to meet with the Shah at the Iranian Embassy in Paris at the age of 21

However critics have cast doubt on her claims, with some questioning why her name has not been recorded in museum documents.

Diba has countered Farah’s narrative and told Artnet News that she was primarily involved in ‘building the photography collection’.

She was later ousted due to accusations of bribery which she maintains are false.

Meanwhile Farah’s style, charm, and support of the arts, led her to be dubbed the ‘Jackie Kennedy of the Middle East.’

At the same time, the Shah was pushing the country to adopt Western-oriented secular modernisation, allowing some degree of cultural freedom.

He believed the headscarf suppressed women and banned the hijab, and granted women the right to vote and an increasing number joined the workforce.

Under the Shah, Iranians enjoyed the luxury of new colleges, universities and libraries. Secondary schools were free for all and financial support was extended to university students.

However the Shah’s determination to showcase an increasingly liberal and modern front to the world and ban on religious garments frustrated traditionalists in Iran. 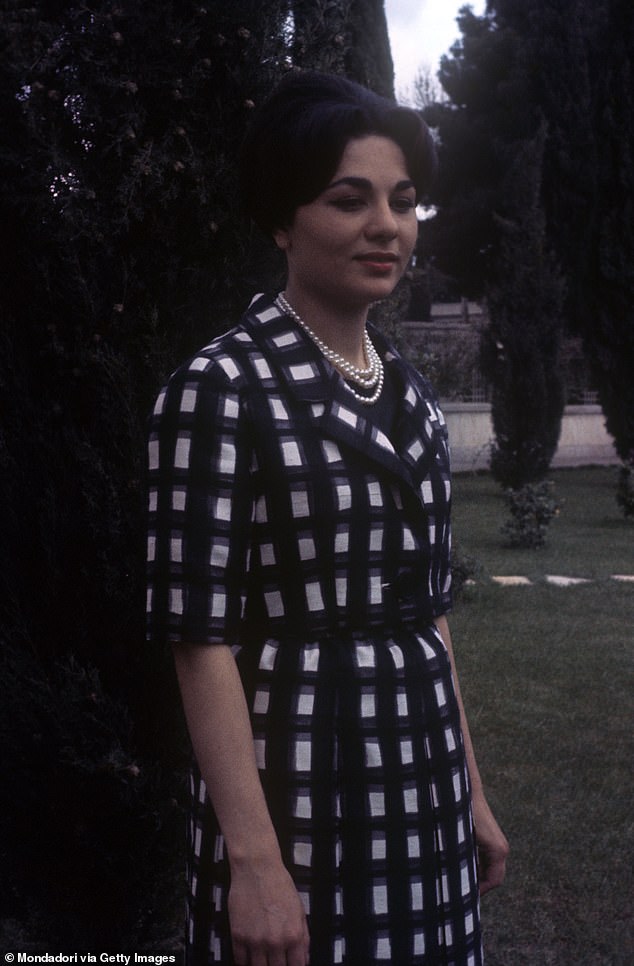 During her time as a royal, Farah took an active interest in promoting culture and the arts in Iran

Under Pahlavi, there was a widespread censorship of the press. He repressed political dissent – and the crackdown on communists and Islamists led to many being imprisoned and tortured.

People lived in fear of the Shah’s secret police called SAVAK, which paralysed people from speaking out against the regime; such was the notoriety of their brutality.

These factors, along with the Shah being perceived as a puppet of the USA and economic uncertainty, culminated in the monarchy being overthrown.

The 1979 Iranian revolution saw the ousting of the Shah and the installment of Ayatollah Ruhollah Khomeini – a shift that would have long-lasting and far-reaching implications. 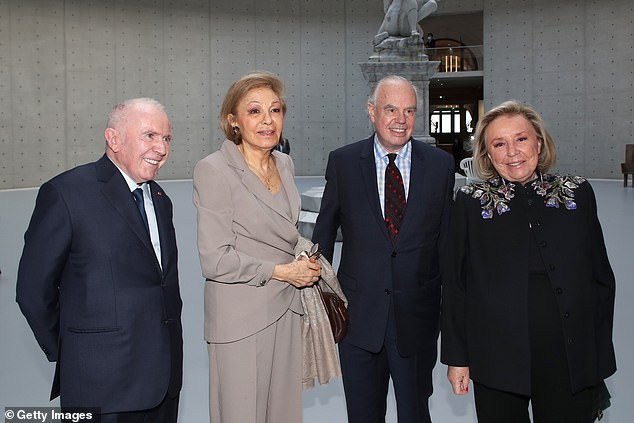 Farah stayed in the country for two years before flying back to the US, where she settled in Maryland. She now splits her time between Maryland and Paris

The family fled to Egypt before embarking on a 18-month search for permanent asylum through Morocco and the Bahamas.

Finally they were granted asylum in Mexico but travelled to the US to seek medical assistance for the Shah’s developing non-Hodgkin’s lymphoma.

Their visit to the States worsened relations between the US and Iran and the couple were forced to flee to Egypt.

Farah stayed in the country for two years before flying back to the US, where she settled in Maryland. She now splits her time between Maryland and Paris.