Your house is on fire. It’s just a small fire for now, but you can see it’s quickly spreading. The firefighters arrive – they want to take immediate action, use all resources possible to put it out. But the people in charge aren’t sure. They say they want to watch and wait. Are we sure the fire is getting worse? Isn’t it normal, anyway, for houses to slowly blacken and break down over time?

You’re screaming. But the people in charge are polling your neighbours on what they think should happen next. Your neighbours are undecided. Your house continues to burn. 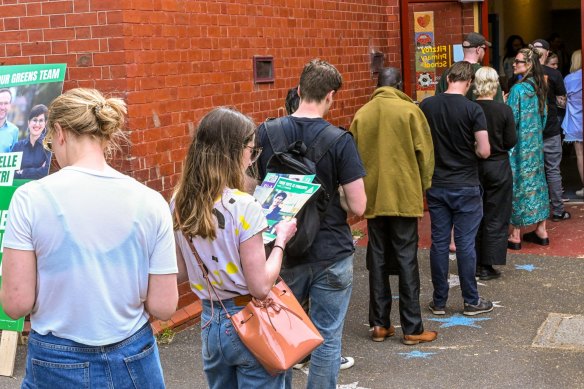 Australians as young as 16 can drive, work and pay taxes – so why can’t they vote?Credit:Justin McManus

This is what it’s like for young people under the voting age of 18 in Australia.

Australians as young as 16 can drive, work and pay taxes; they can access welfare payments. Those as young as 10 can be arrested and locked up in prison. But young people can only watch while Australians older than them head to the polls, as those in charge get to shape the country they will inherit.

This needs to change. We need to lower the voting age to 16 in Australia.

Our country loves to demonise young people: they are ignorant and lazy; they don’t understand the value of a hard day’s work; they want the world handed to them on a silver platter, with a side of avocado toast. In 2017, Pauline Hanson called for the voting age to be raised to 21 because, as she told Channel Seven’s Sunrise program: “They’ve never held a job, they’ve never paid any taxes, they have no understanding of politics … They have no idea.”

All untrue, of course. The reality is young people are engaged, smart and desperate to have their voices heard.

A 2018 report to the UN Committee on the Rights of the Child found young people across Australia felt “frustrated”, “helpless” and “powerless to make change”. We’ve seen thousands of school students march out of the classroom to strike for climate justice. A group of eight teenagers went all the way to the Federal Court to get a ruling that the environment minister had a duty of care to protect young people from climate change when considering future fossil fuel developments. Former federal minister Sussan Ley successfully appealed against that finding in March this year.

The next generation of voters don’t have the luxury of political complacency. The Earth is on track for warming of about 2.5 degrees by the end of the century. Many young people are being priced out of the housing market, while recent research shows the average 18-year-old retail worker in every capital city is facing rental stress.

Some argue that young people are idealists, ill-prepared to understand the practicalities and limitations a good government must navigate. But the reality is that young people have the capacity to see things more clearly. They aren’t corrupted by money or corporate interest. They were raised in a digital age that has trained them to discern information and see through spin. When the house is burning down, they won’t stand around and deliberate; they will call for action.

Australia has lowered the voting age before. In 1973, the Whitlam government changed it from 21 to 18.

The conversation is shifting here again. Last week, the independent federal member for Kooyong, Monique Ryan, announced she would introduce a bill in the new year to make voting mandatory for 16 and 17-year-olds.

In 2021, a bill was introduced into the ACT parliament proposing to lower the voting age to 16 years for territory elections. A similar bill was announced in NSW parliament earlier this year.

Just last week, New Zealand’s Supreme Court ruled that capping voting at 18 was discriminatory and inconsistent with the country’s Bill of Rights. The move prompted Prime Minister Jacinda Ardern to announce her government would draft legislation to change the voting age to 16. Scotland, Brazil and Austria already allow people as young as 16 to vote.

But we need to address the elephant in the room. The real reason why some Australian politicians will be reluctant to lower the age is they are afraid of young people; they are afraid that they will tend to support more progressive candidates and threaten the major parties.

The truth is, the 16-year-olds being cut out of the democratic process won’t stay 16 forever. They will grow up. They will become eligible to vote. They will inherit the world we are building for them, and they will remember how those in power spent years neglecting them. If political parties want to earn young people’s vote, they can start by listening to them. They can let them raise their voices at the voting booth.

Justine Landis-Hanley, 27, is a spokesperson for the Australian Youth Affairs Coalition.

The Opinion newsletter is a weekly wrap of views that will challenge, champion and inform your own. Sign up here.

Poor little rich kids: There aren’t swaths of research on the woes of rich kids. There is some evidence they’re at greater risk of battling depression, anxiety and substance abuse, so why aren’t we talking about them more?

Morning checklist: There are three questions Jessica Irvine asks herself every morning, and if she can answer “no” to all three, it’s sure to be a good day.

Life’s golden rule: Being back in her old family home after a divorce and raising kids there was “beautiful agony” for Kate Halfpenny. That’s why she now never looks back.