Woman, 27, reveals her arm swelled up to THREE TIMES its size and was oozing pus after she was ‘bitten by a false widow spider’ in her sleep

A restaurant manager claims a false widow spider snuck into her bedroom window and feasted on her arm as she slept – leaving a throbbing ‘golf ball-sized’ bite that burst.

Kayleigh Ward, 27, from Poole, Dorset, revealed she now sleeps in a hoodie after she woke up on September 30 to find her upper left arm had swollen up and turned red.

The infection then began to spread and by the next day, her arm had tripled in size.

She was rushed to A&E with the unexplained wound, where she was given blood tests and antibiotics – eventually discovering it was a spider bite. 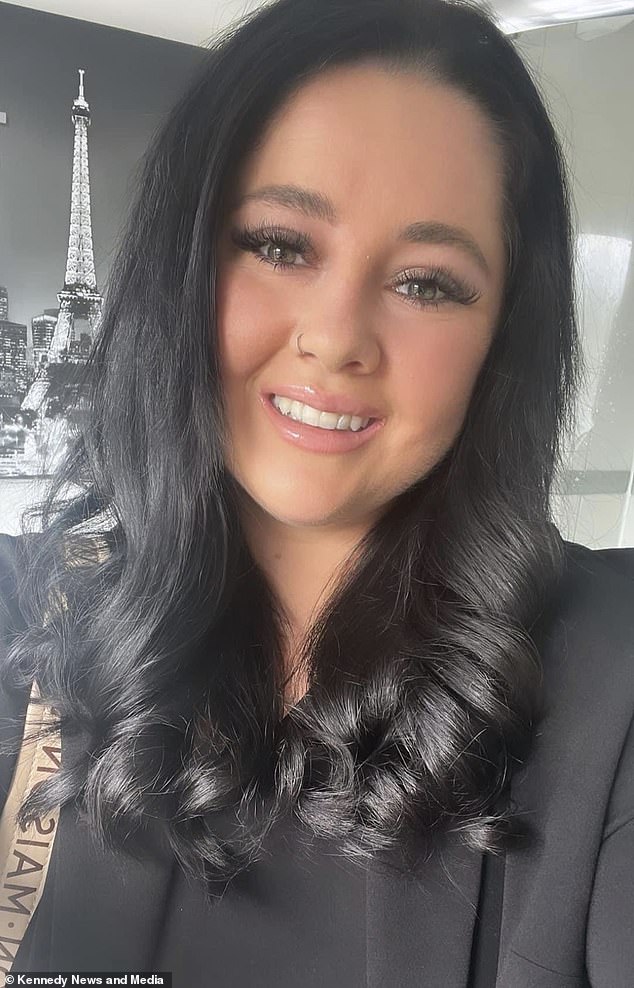 Minding her own business: Kayleigh Ward, 27, was fast asleep when the spider bit her arm, causing a significant reaction 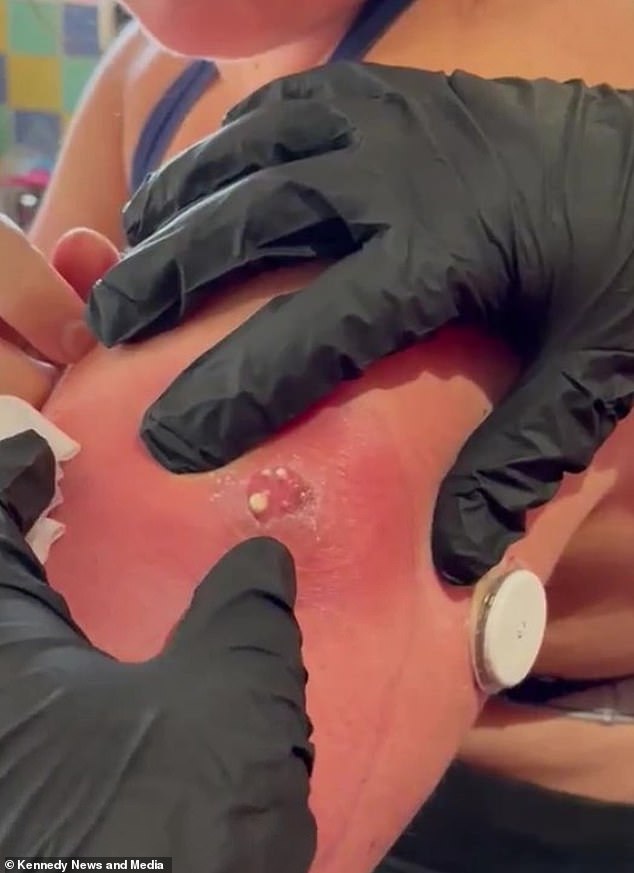 Goopy pus: Kayleigh eventually asked her sister to help her to drain the pus that had gathered at the infection site

Kayleigh said: ‘I woke up with the lump in my arm. It was probably the size of a golf ball.

‘I think I was asleep when it happened. I don’t sleep with my window open. I just open it in the day for an hour or two to let some air in.

‘I’ve never been worried about anything like that until this bite. My arm was humungous.

‘It started just under a golf ball and I reckon it got three times bigger.’

After first spotting the bite, Kayleigh drew a line around it to measure if it got bigger, and then headed off to work. 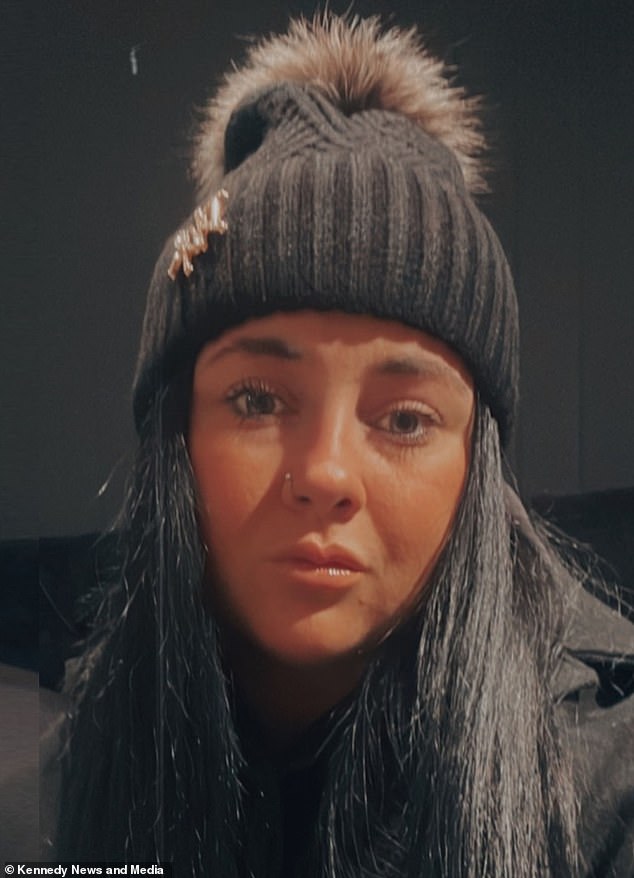 Looking for a warm place to sleep: False widow spiders are known to come indoors more during the cooler autumn months (picture Kayleigh who got bitten) 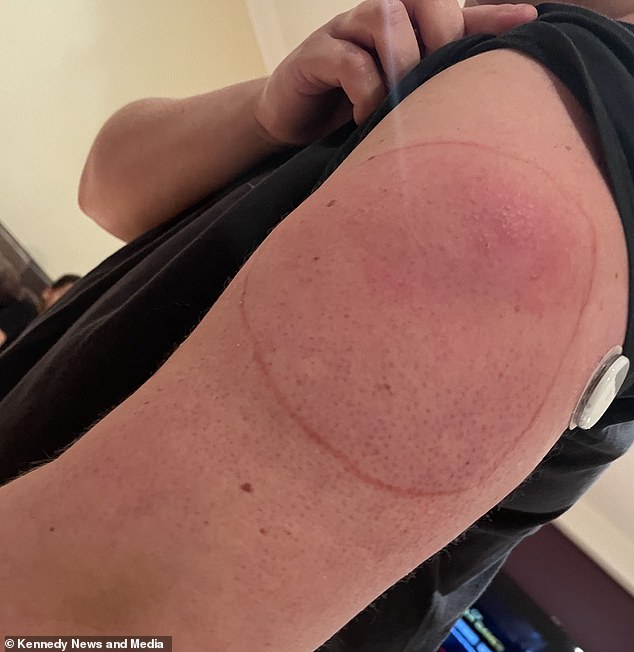 Spreading infection: The victim drew a line around the infected area so she could monitor whether it spread or not 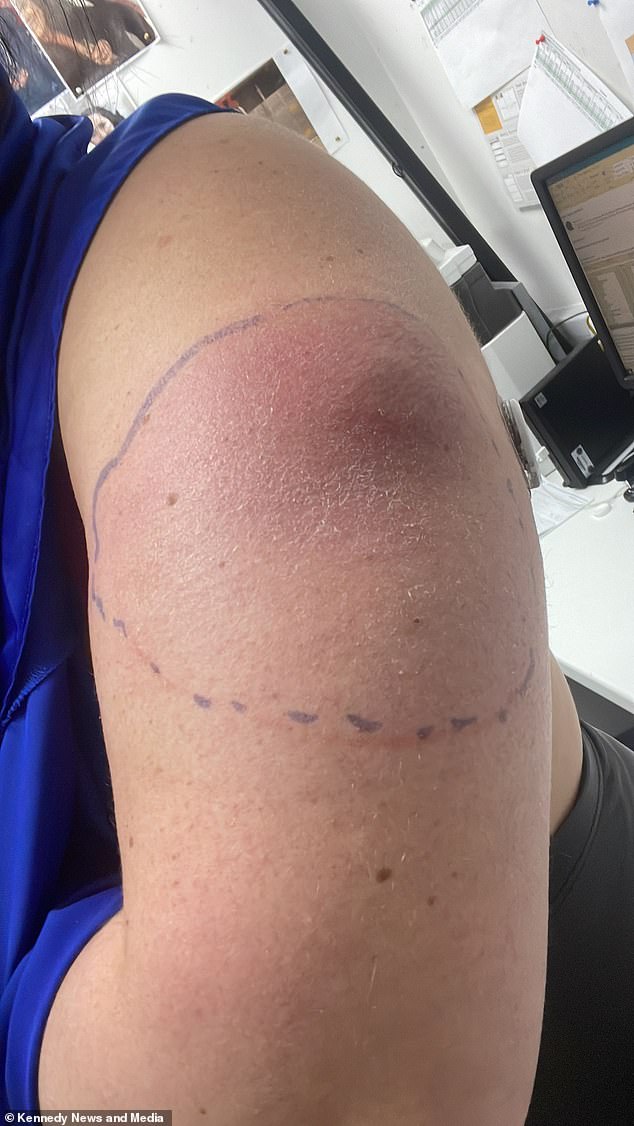 Getting bigger day by day: The site of infection continued to spread while a large lump also developed 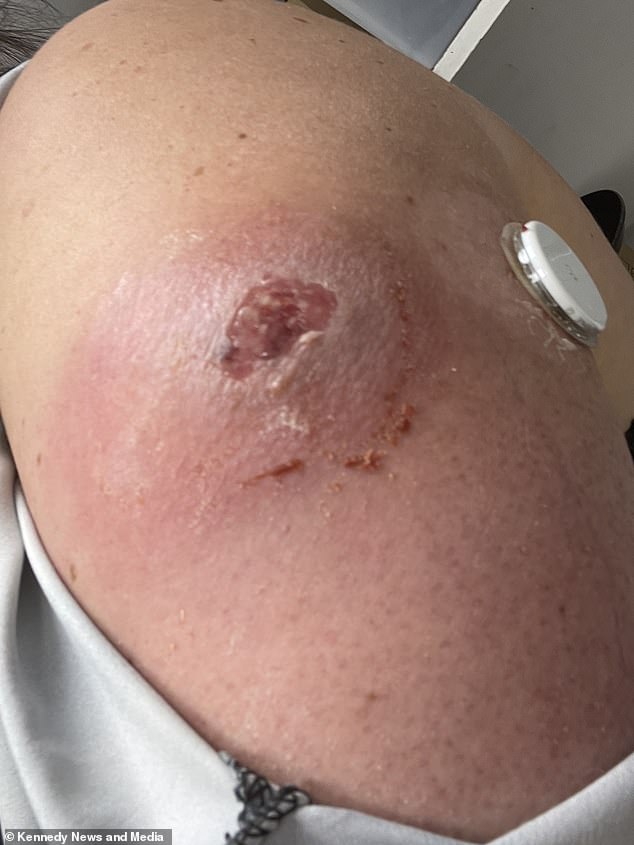 Gross: The entry mark from the spider bite only became visible several days after the initial infection began to spread 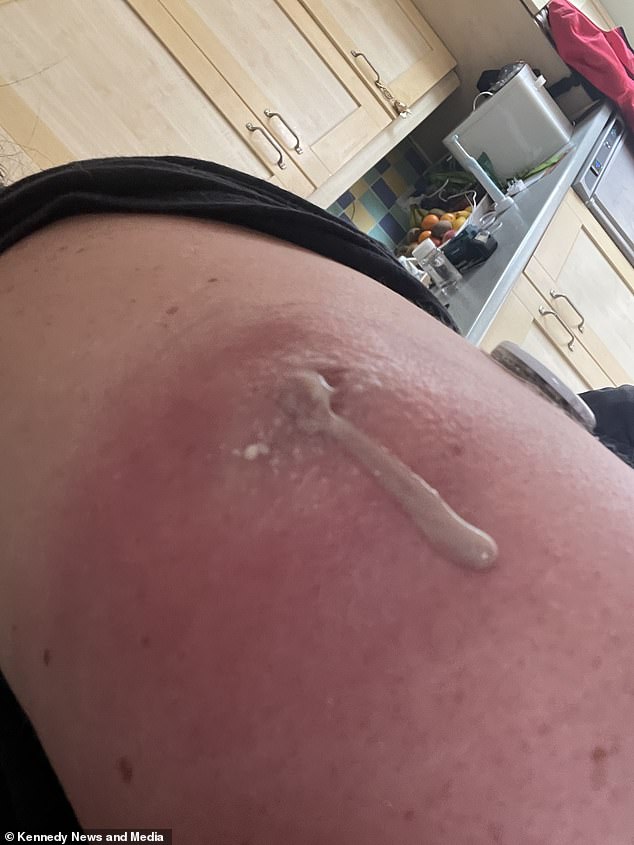 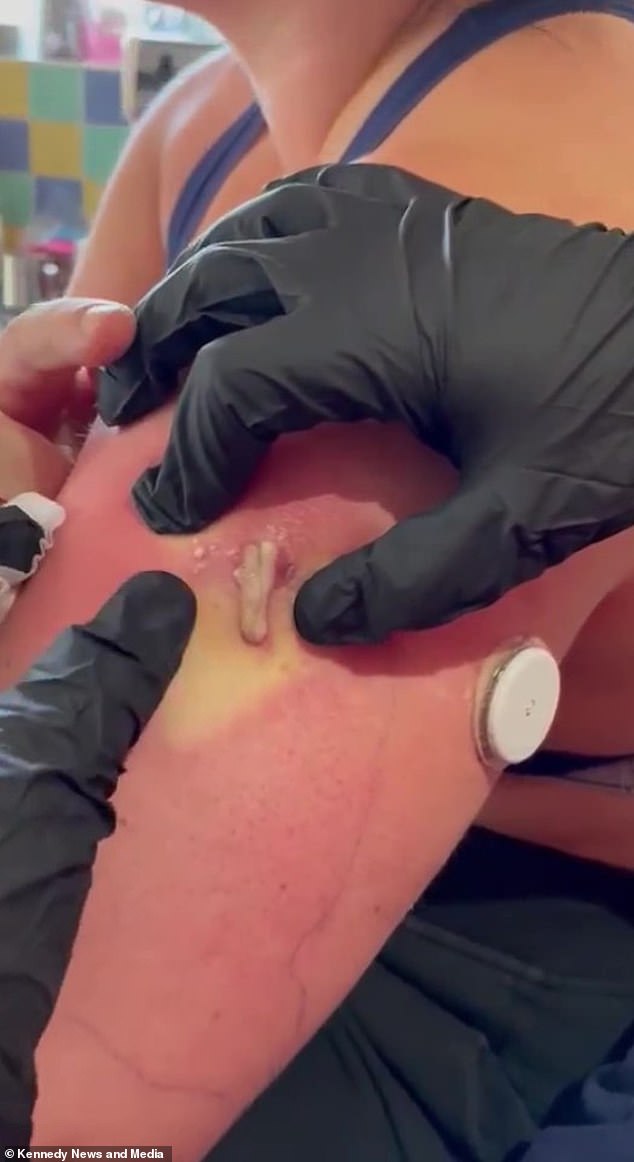 Not for the faint-hearted: Medics and loved ones helped Kayleigh out by attempting to drain the wound and squeezing the pus from the bite 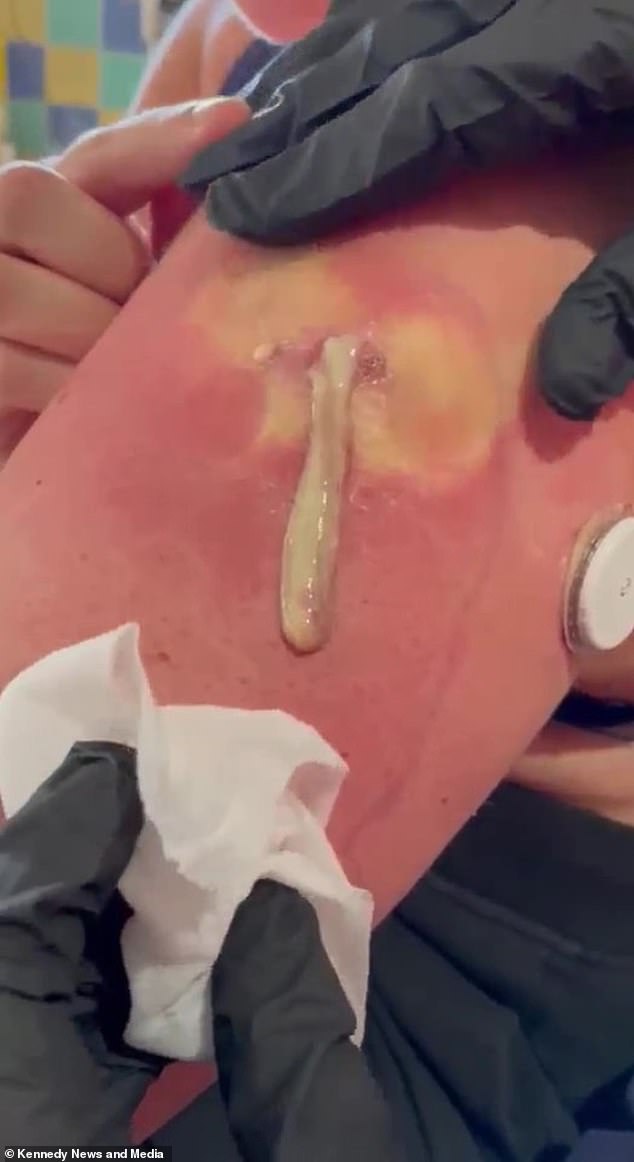 Don’t look: Kayleigh’s sister finally helped her squeeze the spider bite and get rid of the disgusting pus

She then watched it creep across her skin as it began to swell.

Kayleigh said: ‘I went to work on the Saturday and drew a line around my arm to see if it spread. I think I was infected or allergic to the bite.

‘I then went to the hospital to A&E and they took some blood tests. I was there for about seven hours and didn’t see a doctor because it was about 5.30am.

What is a False-widow spider?

The spider that bit Kayleigh was probably a noble false widow, or Steatoda nobilis.

The first recorded sighting of one of these spiders in the UK was in 1897 in Torquay, where they are believed to have arrived in crates of bananas imported from Madeira and the Canary Islands.

They used to be only found commonly on the sunny south coast, but warmer weather means their range is now spreading.

And they often come into homes in Autumn when they weather gets cooler.

As Britain’s most venomous spider, and with its orange legs and distinctive skull-like body marking, it is often confused with the more dangerous black widows.

The females are one of the few species in the UK with a bite capable of breaking human skin.

Although false widows do have a venomous bite, the venom is not particularly potent.

Usually the only symptom is pain at the site which may radiate away from the bite.

However, if the bite is untreated, it can kill a person. But this has never happened in the UK.

‘They booked me an appointment on the Sunday where they gave me antibiotics and said if it got bigger to go back.

‘The next day, the redness had spread about 3cm across my arm and the size of my arm tripled.’

In total, Kayleigh, who is type one diabetic, went to hospital three times. But it only became clear there was an entry wound where the spider had bitten her several days later.

She said: ‘When I went back again on Monday that’s when the lady said it was a bite from a spider. I reckon it was a false widow spider bite.’

Kayleigh found herself in so much pain on Tuesday morning that she begged her sister to squeeze out the fluid that had already begun seeping from her arm.

Kayleigh said: ‘In the end, I put a hot water bottle on it to bring it to the surface. The following morning when I touched it, it was seeping for about half an hour.

‘When I woke in the morning my other sister, Mia, asked me how my arm was.

‘All I did was touch it to show her and as I touched it, pus started to come out of my arm, so you can imagine how full it was.’

Her other sister Natalie Ward, 24, heroically stepped it to squeeze it for her, causing the gloopy, thick infection to ooze out of the wound.

She said: ‘I wanted to try and get everything out. It was oozing the pus for about half an hour. It was huge. After that, it wasn’t as full so it didn’t hurt as much.

‘It was throbbing until all the stuff came out. I still have it on my arm almost a week later.

‘I wear dresses at work and it’s not nice to have a big lump on my arm.’

Kayleigh believes the spider may have snuck in through her bedroom window.

And she claims she has been left sleeping ‘in a hoodie’ and wrapped in her duvet as she fears the creepy-crawly is still loose in her home.

She said: ‘I haven’t found the spider which is why I’ve been sleeping wrapped up in a duvet.’