She boarded the train, but hopped off at the last second.

A San Francisco woman has been killed in a freak accident after getting off a train without her dog.

41-year-old Amy Adams was dragged to her death at Powell Street BART station on Monday while still tethered to her pet, after the doors closed behind her while the dog was still inside.

Security footage shows Adams was on the platform with the leash attached to her waist, ABC7 reported. She boarded the Dublin/Pleasanton bound train with the dog, but at the last second changed her mind and got back off… but the dog did not. 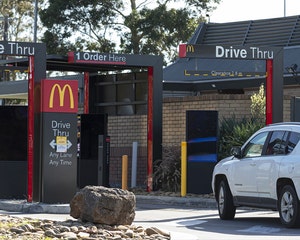 As the 3:16 PM train departed, she was dragged down onto the track. The dog was not hurt.

Witnesses said she had been waving to someone before the accident; a man on the platform was heard screaming “My girlfriend! My girlfriend!”

“It was pretty traumatic,” witness Mike Sim told the outlet, describing the noise of the victim being dragged. “Everybody was in shock.”

He said he immediately went to a phone on the platform and reported what had happened.

“‘You need to stop the Dublin train that just left Powell Street cause there’s somebody stuck on the door and then she goes OK, OK, you know, we’ll contact them,” he recalled.

BART allows all service animals on board, but other pets must be in a carrier. The dog did not appear to be a service animal, but this is being investigated.

“This is a tragic loss of life, and we are following all safety protocols,” BART Spokesperson Alicia Trost said.

The National Transportation Safety Board is now investigating the incident; they are examining the functionality of the door system, and operational procedures for directing passengers on and off the train.

NTSB spokesman told the outlet a preliminary investigation could take as much as 30 days, but the final report that will indicate probable cause could take up to two years.

“The preliminary report is going to lay out the facts and the circumstances of the accident it will not be analytical it won’t point to a cause or factor,” he said.

However he said new safety protocols may be introduced before that.

“Are there ways we can change a practice or a system or training or equipment in order to break that accident chain in the future,” he added.

The driver of the train has been placed on administrative leave pending the results of a drug test, which is standard procedure.