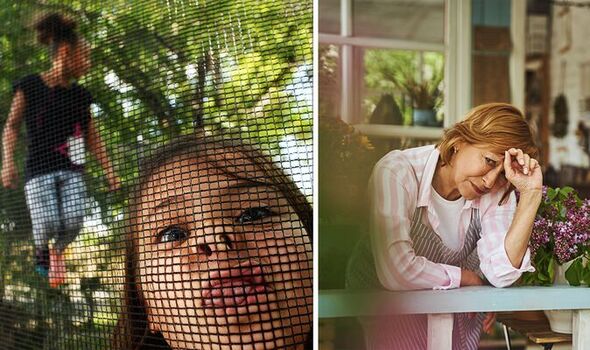 The woman claims the neighbours’ trampoline has become a nightmare for her and her family as it is so close to her fence and the children are so loud that it severely disturbs their peace.

She shared her experience on the forum Mumsnet, explaining she has already asked the neighbours to move the trampoline but they refused.

The woman, who wanted to remain anonymous, said: “My wellbeing and happiness are being severely impacted by my neighbour’s noisy children.

“They scream, argue, shout and kick footballs at the fence all day long. They only have one volume and it’s loud. The whole family just shout at each other.”

She continued: “Last year they got an enormous trampoline and positioned it right up against (their) fence bordering our garden.

“We are a terrace row, but each house is staggered, so our back doors are not aligned. Our back door and patio area is about a third of the way up their lawn.

“We were aghast when the neighbours chose to position their trampoline right in line with our back door and patio table, where I also have lots of pots and plants.

“When the kids use the trampoline they stand higher than the fence and stare straight into our kitchen window, and they used to call out to us all the time until we asked them to stop.”

The woman said they “can no longer eat or read at the table because of the noise” and they fear a ball “hitting you on the head”.

She added: “We did ask them not to put the trampoline there and brought them round to show them how much it overshadowed our patio and removed all privacy.

“They declined to reposition it saying that there was nowhere else in their 80ft garden they could put it.

“Given that there is nothing in their garden apart from lawn and garden toys this is blatantly untrue, so I have no idea why it cannot move a few feet away from our patio door. What do I do now? Ask again? Beg and cry? Puncture every ball that comes over and wrecks a plant? Write a letter? Build a cage over our table to protect ourselves? How can I make them understand what they are doing to us?”

Other members of the group said they had the same experience with their neighbours and many advised her to “complain to the local council”.

Looking for a new home, or just fancy a look? Add your postcode below or visit InYourArea

One user explained: “There are actually restrictions on how close to boundaries trampolines can be placed when they imping on privacy in this manner.

“I know people who have gone this route and have been successful in getting them moved.

“Our neighbours stupidly put one next to the fence, too, overlooking our patio and into our living room. We told them it needed to be moved because of the way their children stood on it and stared at us and talked to us and left us with no privacy.

“They tried to argue, so we just started correcting their children every single time they stood on it to look over the fence/talk to/at us, firmly telling them to turn around, they were being rude. It was moved within a week.”

Another user advised her to “mention the light”.

@bettyboo40 explained: “Our neighbours at the back complained about our security light for the same reasons. I had no idea so felt awful. We moved the angle of it straight away.”

Another one suggested: “I think I’d be putting a three-foot solid trellis on top of the fence and then putting something sharp on top of that… or starting a very smoky BBQ the other side of the fence every time they get on the trampoline…”