Woman, 26, who has one breast larger than the other and calls herself the ‘Queen of odd b***’ says she’s embraced her natural body and won’t have surgery – and is a hit on OnlyFans

A woman who has one breast that is much larger than the other has revealed how she turned down surgery and embraced her unconventional body – and now has nearly 10,000 subscribers on OnlyFans.

Imogen Grace, 26, from Northwich, Cheshire, noticed during her teens that one of her boobs was growing much faster than the other – and has experienced bullying from people online and in person.

At 18, after using ‘chicken fillets’ to fill the gap in her bra for years, Imogen made a u-turn and decided to accept her natural body, declining surgery from doctors to even out her breast size.

Now she wears a size 38H bra to accommodate the larger boob while the smaller one – estimated to be half the size – sits in the half-full cup on the other side. 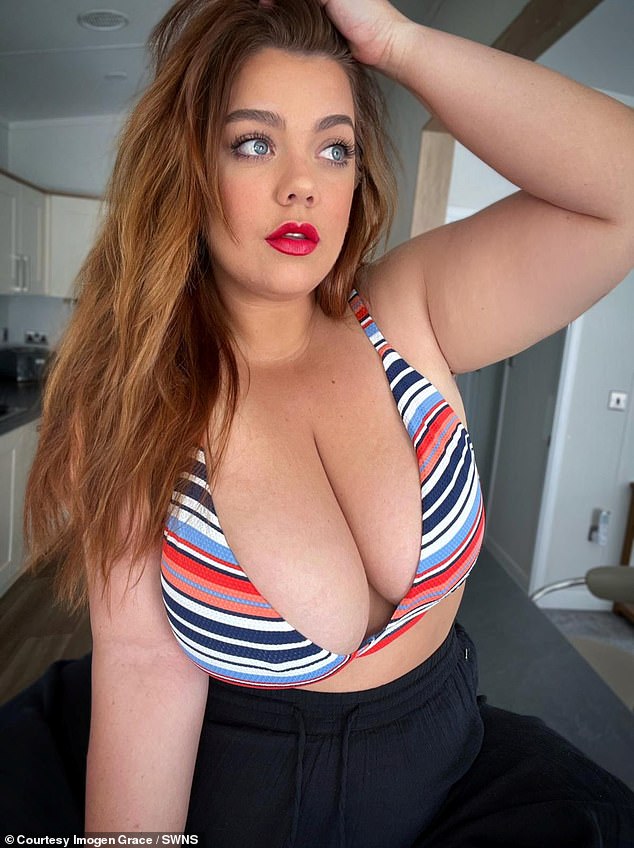 Imogen Grace, 26, from Cheshire noticed during puberty that one boob was significantly bigger than the other. After turning down surgery, she’s embraced her looks – and now has nearly 10,000 subscribers on OnlyFans 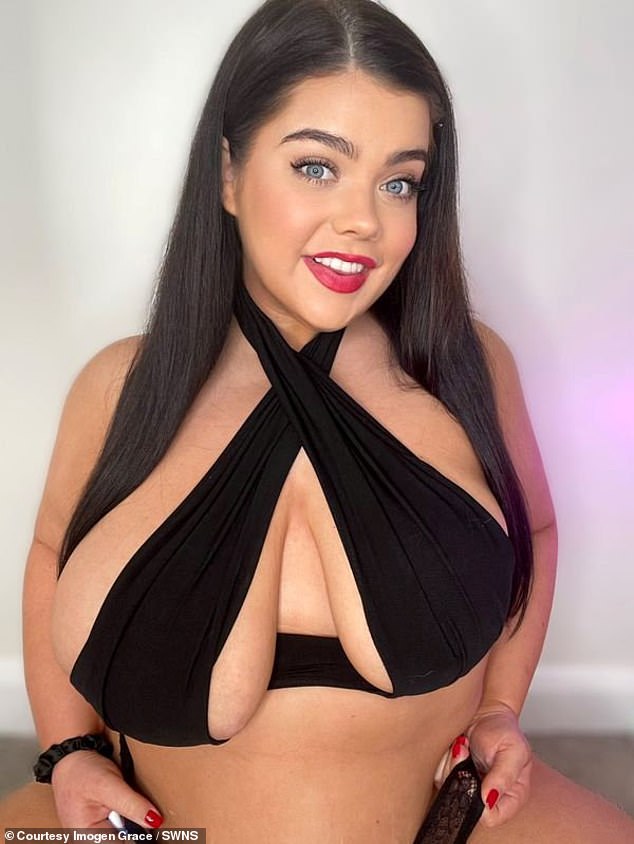 The pretty brunette was offered surgery as a teenage but said no, deciding she would love her body as it was meant to be – and she now regularly shares bikini shots of herself with her fans

She explained she was in high school when she first realised her body was developing at a different rate:: ‘I was only 11 when I went through puberty, and my boobs came in quite early.

‘I was in year eight when I started noticing I had bigger boobs than everyone else but one was significantly bigger.

‘It got to around year 11 of high school and I told my mum who took me to the doctors and they weren’t shocked at all. They just said I’d grow into it but to come back at 18 if I hadn’t and I could have surgery.’

However, she quickly told her mum that she wasn’t keen on the idea of going under the surgeon’s knife.

‘There was something bothering me in that I felt like I didn’t want surgery, I just didn’t feel like the size difference was bothering me.’ 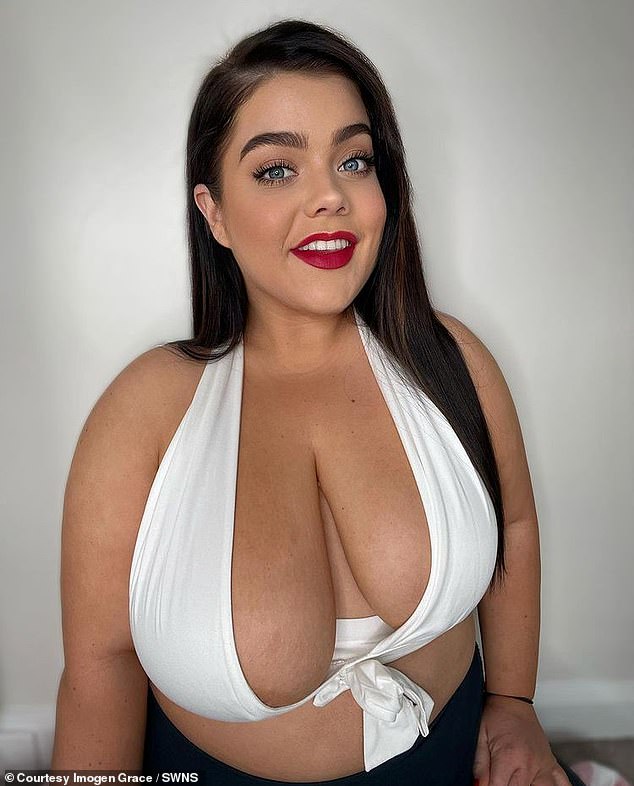 Critics online have called Imogen ‘Biggie Smalls’ and other names, but she doesn’t let it bother her as her 10,000 OnlyFans followers are huge fans of her look

She is now, she says, raking in the cash with her unique look on the platform, amassing 10K followers since launching her own content during the pandemic – instead of listening to cruel jibes about her body from critics, the model has given herself a moniker that errs on the comedic side.

Imogen has called herself the ‘Queen of Odd Baps’. She has received cruel comments on her appearance via TikTok – with people calling her Biggie Smalls or Nemo, but said she laughs it off and feels more confident than ever.

She says the partners she’s been with ‘always love the different sizes – they’ve said it’s the best of both worlds!’

Imogen, who grew up in Manchester, said: ‘When I went on TikTok, I established my niche of odd boobs and that’s now my niche on OnlyFans.

‘I was offered surgery to make them more even when I was 18 but my boobs didn’t bother me to the point that I wanted surgery so I’ve just lived with it.

‘I’ve had partners and they aren’t fazed by it, I’m not fazed by it, so I don’t see the point in correcting something that doesn’t really bother me.

‘Everybody has an opinion on my boobs. I do get a lot of nasty comments but I just scroll past them. If it is really bad, I will block them. 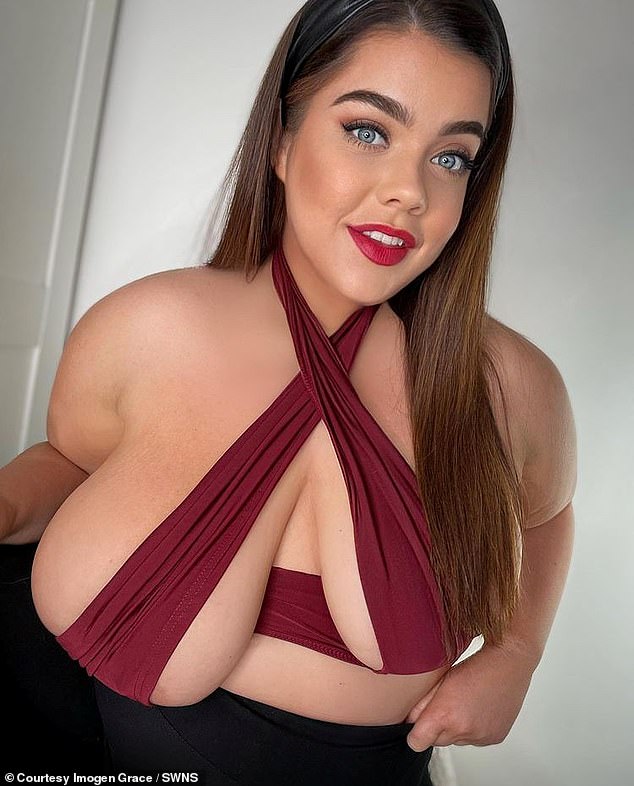 Since Imogen started TikTok, her OnlyFans just skyrocketed. I went from like 250 subscribers to just under 10,000 after one of my videos got 3.5 million views.

Is it normal to have one boob bigger than the other?

According to Very Well Health 91 per cent of women have breasts that are not symmetrical.

The condition is called juvenile hypertrophy when one breast is significantly larger than the other one.

Many people seek surgery to rectify the juvenile hypertrophy and make the breasts a similar size.

‘If I go to my friends’ houses, we scroll through the comments and have a laugh at the odd jokes.

‘I feel like we are all unique, we all look different, and that’s what makes us us.

Imogen got into webcam modelling aged 19 after her sister told her about a TV programme she’d watched about the industry.

She did that until the first lockdown in March 2020 and noticed webcam work was drying up, with models moving to OnlyFans.

She added: ‘I don’t know what cup size my smaller boob is because when you get measured for a bra, they measure round the whole bust. It’s not the case of measuring the boobs individually.

‘To make it more comfortable, I did use ‘chicken fillets’ to fill out the gap by my smaller boob, and I have used socks, but now I don’t use anything.

‘It’s not uncomfortable. Maybe I’ve just grown to get used to it; it just feels normal to me.

She says since she started her TikTok account, her OnlyFans subscribers have skyrocketed, going from 250 subscribers to just under 10,000 after a video got 3.5 million views.

‘Everybody has an opinion on my boobs. I do get a lot of nasty comments but I just scroll past them. If it is really bad, I will block them.

‘People do think it offends me because I get girls and boys commenting back to them in my defence, but it doesn’t affect me in the way that they think.. It doesn’t hurt my feelings, it’s just funny.

‘Girls have reached out to me saying they’d had the same boobs as me and it had really bothered them so they went through surgery. I’ve never experienced that.

‘I think it’s made me more confident doing OnlyFans! I will carry on doing it for a while, I have no plans to stop any time soon. I’ll be doing it for a good few years to come.

‘I’m only 26, and I know there’s people out there doing it at like 40 years old with their own niches, so I don’t want to stop any time soon.’