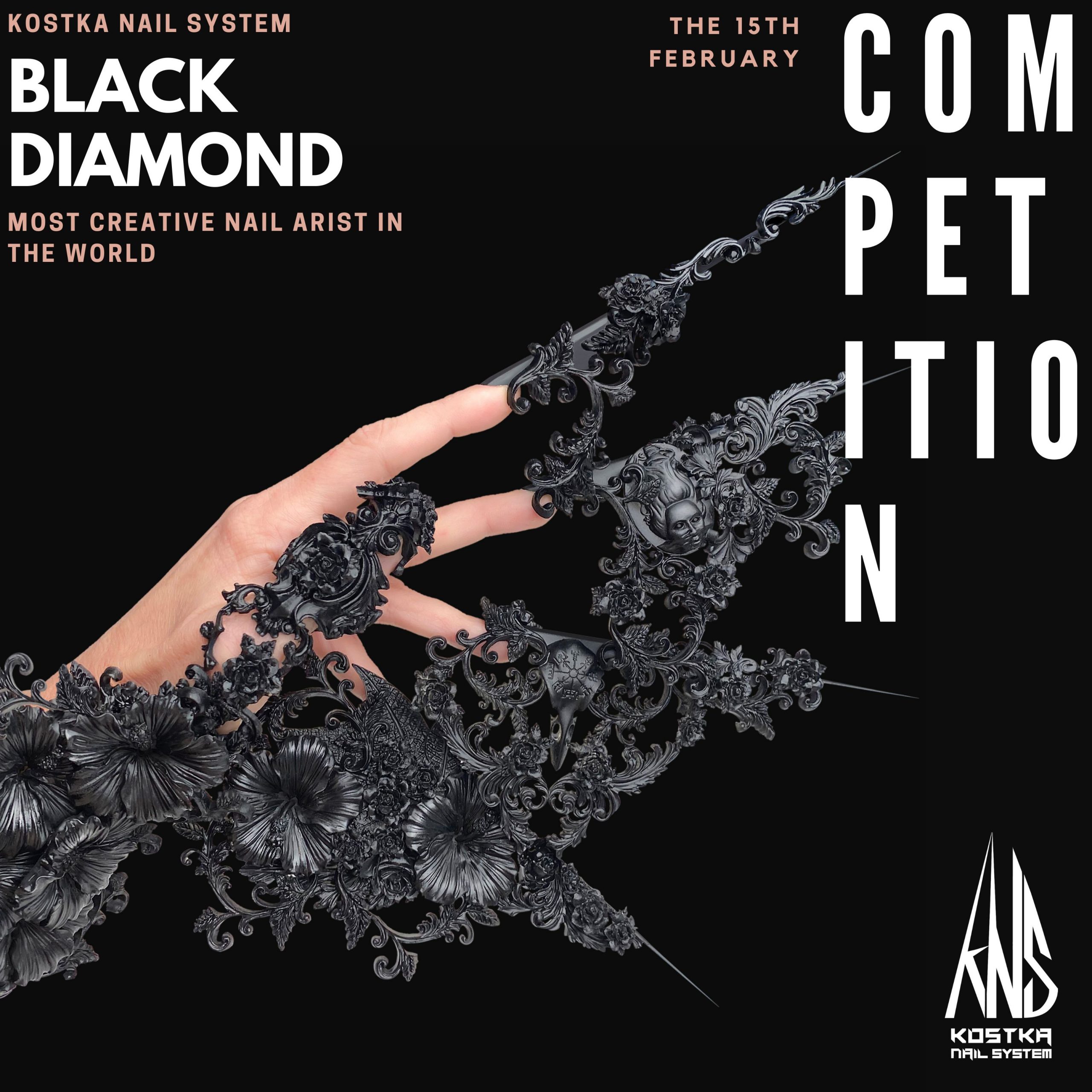 The first-ever organized competition for the Most Creative Nail Artist in the world ended on 15th February. The competition was organized by Kostka Nail System, led by the owner of the brand, Serbian Artist Kostka Bojana. Bojana is one of the most famous nail artists in the world, known for Extreme Nail Forms and various nail modeling techniques and nail art. Bojana has worked on the covers of many world-famous magazines. That’s how she came up with the idea to organize this, very specific competition. The contestants were given the task to make a poster, as for the cover of a fashion magazine, on the topic of “BLACK DIAMOND”
Bojana believes that creativity is what separates a nail artist from a nail technician. So she asked the contestants to get out of the pattern of everyday thinking and to gather enough courage to show the world that imagination has no limits.
Many nail technicians did not have the courage to stand alongside top artists around the world, who applied for this competition.
Those who had the courage to compete became pioneers of a completely new direction in the nail industry – a direction that will clearly separate Nail Technicians from Nail Artists.
The nail industry has been in place for many years, very little importance was given to the originality and specific style that every artist should have. Technical abilities were more appreciated, where success was seen in the fact that all nails were completely identical, in accordance with the rules of nail shape. Seen from this perspective, there are a lot of good nail technicians in the world. When it comes to Nail Artists, there are very few of them. The reason for that is the lack of originality and creativity. Nail technicians will prefer to copy someone else’s work, apply other people’s ideas in their work, while Nail Artist has his own, solidly built style, by which he is recognizable. In fact, this was the task of the contestants: To show their originality and innovation in creating an avant-garde poster.
The competition attracted our attention, not only because of the fantastic works of the competitors but also because of the very idea of separating the technical from the artistic side. We carefully followed the social networks and eagerly awaited the announcement of the winner.
The competitors were from different countries: Czech Republic, Slovakia, Greece, Hungary, Bulgaria, Dominican Republic, Poland, Italy, Portugal, Iran, Spain …
The title of the Most Creative Nail Artist in the world was won by an artist from a small town in the Czech Republic, named Znojmo, Anna Machova. 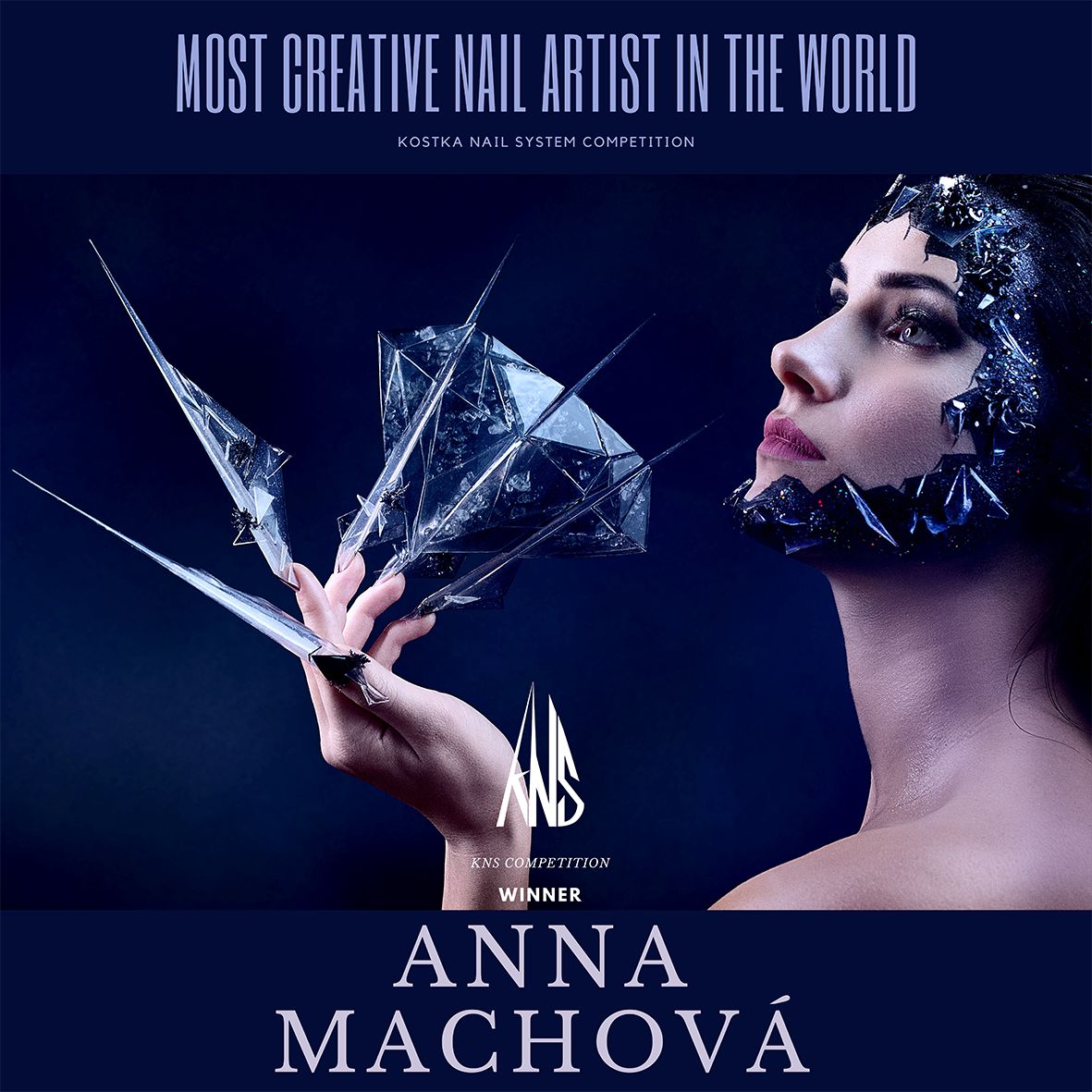 ” Since last March I have been an Ambassador for Kostka Nail System Brand. My nail artist career has not yet properly started because of Covid-19.
Parents have been leading us to art with my sisters since childhood. They themselves set an example in their creative skills. I enjoyed creating everything, discovering different materials and techniques.
In 2019, I finally had the opportunity to attend a course in nail art basics. It was like a drug, I needed to learn more and more, and I was seeking an artistic direction. On March 16th, 2020 I completed the first course on extreme stiletto with the main distributor of KNS for the CZ Republic, and Bojana’s student, Michaela Jancikova. The very next day she contacted me if I want to become a KNS ambassador.
After training with Michaela, I was inspired by her creativity. She showed me a whole new dimension of art that I wanted to know.
Black Diamond competition was my third poster. Worldwide competition, Me vs. the Whole World = no chance, I’m just a beginner. But I felt a bit obligated to participate. When the KNS brand approached me to work with them, I should take part in its competition and show what is in me. I was abducted from the whole principle of competition.
Participation itself was a win for me from the beginning. -> The feeling of helping someone.
To meet Bojana and individual training as a win seemed unattainable to me. I really didn’t expect this … when I saw all the works that were published, the response to some of them, and the only one winner.
For 10 days I was excited, full of expectations, which work will win. On the day of the announcement, I did not stop watching Instagram. I sat with my family and kept updating the page. When the result came, I cried with joy and my three-year-old daughter asked me with scare “Mom, what’s going on”, my husband said “Mom won” it was touching.”
In the end, we asked Bojana, how could they decide, out of many fantastic works, for just one?
“Practicing any art, no matter how well or badly, is a way to make your soul grow. The desire to create is one of the deepest yearnings of the soul. Creativity involves breaking out of the excepted patterns in order to look at things in a different way. They all had a very difficult task in front of them. We were asking them something that was never asked before:
To invent, experiment, take a risk in breaking rules and allowing themself to make mistakes. There is no innovation and creativity without mistake. Art is knowing which mistake to keep. Human creativity is what drives us forward as a species. It is this unique ability to harness our thoughts and ideas that have been responsible for some of the world’s greatest inventions, from the wheel to the microprocessor. Nail artist’s creativity is what drives forward the complete Nail Industry. During this competition, Nail Industry saw something that was never seen before. Each and every one of them showed us that everything we can imagine is real. Considering all of the works, there is no second place according to complexity, and technical skills. Each of their works deserves first place, in any other competitions. However, we needed to choose only one work, as we promised. So, we choose the most creative one. Her work won over our judges with its originality, elegance, and fantastic technical performance. What impressed them the most was how Ana developed the theme and made the nails, which, when put together, form a diamond, which is the given theme of the competition itself”.- said Bojana.
This unusual competition, which attracted our attention, was organized for charity. All the money from the registration fees was donated to the animal protection organization. Thanks to this donation, 3 dogs with disabilities received wheelchairs and stood up for the first time, after a long time.