‘You might have to battle, but it isn’t about what society thinks’

Dan Graham had a "standard" view of what his wedding would look like: "I'm from the [NSW] Central Coast, I was imagining a 'rainforest-y' area, quite casual."

But when the podiatrist proposed to his now wife, marketing manager Nandita Reddy, he realised things would probably be a bit different. 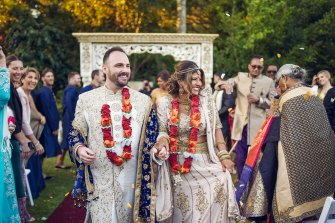 Daniel and Nandita appear on the new SBS show, Marry Me, Marry My Family.

"I'm the first person in my household to get married and I knew for my parents it would be important to have a traditional Indian wedding," says Reddy.

"But I was happy to take it easy and I actually wanted to do a 'not Indian' wedding and mix in the cultural elements. It was Dan who was like, 'No, I want to do an Indian wedding.'"

Graham and Reddy appear in the new SBS show Marry Me, Marry My Family, which premieres on Tuesday night. The show follows cross-cultural couples as they plan their big days, contending with expectations from their families and communities.

In the end, the pair settled for two wedding ceremonies: a full traditional ceremony for more than 400 (to which Graham says he brought 10 guests, "eight of whom were my family") but also a ceremony for 230 with a mix of Indian and western traditions.

"Central Coast culture is not vegetarian and alcohol free," Graham laughs. "So the idea was, if that's your religion and what you want to do, that's available, but if you're not, we've got you covered."

"I find both sides get involved and have a deeper appreciation and respect for each others' families, religion, and upbringing," she says. At the end of the day, she believes, "there is no right or wrong".

Kennedy says the key is often taking a bit of extra time to explain what is going on to everyone involved, recalling a recent pair of ceremonies she organised for a bride with Hindu faith and a Catholic-raised groom.

"We had the Catholic wedding a week earlier, followed by a traditional wedding reception. The bride called it her 'white wedding' and felt blessed to be able to wear a white wedding gown.

"The ceremony rehearsal in the church was needed in order for the families to know what to do, where to stand, what to say. If you're Christian and you've attended church and weddings you take it for granted … but for someone who has never entered a church, it's quite overwhelming. Especially for the father who had to walk his daughter down the aisle."

Respecting the other person's cultural background – whether you're the one getting married, in the bridal party or even just a guest – is going to make things much easier: "Giggling and not taking it seriously can easily make the other family, whose religion it is, feel angry or upset."

Although Graham says he was originally concerned some of his party wouldn't be able to last through the long ceremony, some of which was in Sanskrit ("I didn't even know what was going on," Reddy says), he was pleasantly surprised.

"It went for four hours but the only complaint I heard was it was a bit cold … even my mates who I was worried wouldn't be particularly accepting of other cultures seemed to love it."

For Reddy, who notes she feels lucky her family are "quite liberal", the best advice she can give other couples attempting a cross-cultural wedding is to "compromise where you can".

"At the end of the day, just keep focusing on the fact that it's about you," she says. "You might have to battle with your family, but you have to remind them it isn't about what society thinks or wants: it should be about their child and their partner."

Marry Me, Marry My Family airs Tuesday 8.30pm on SBS.