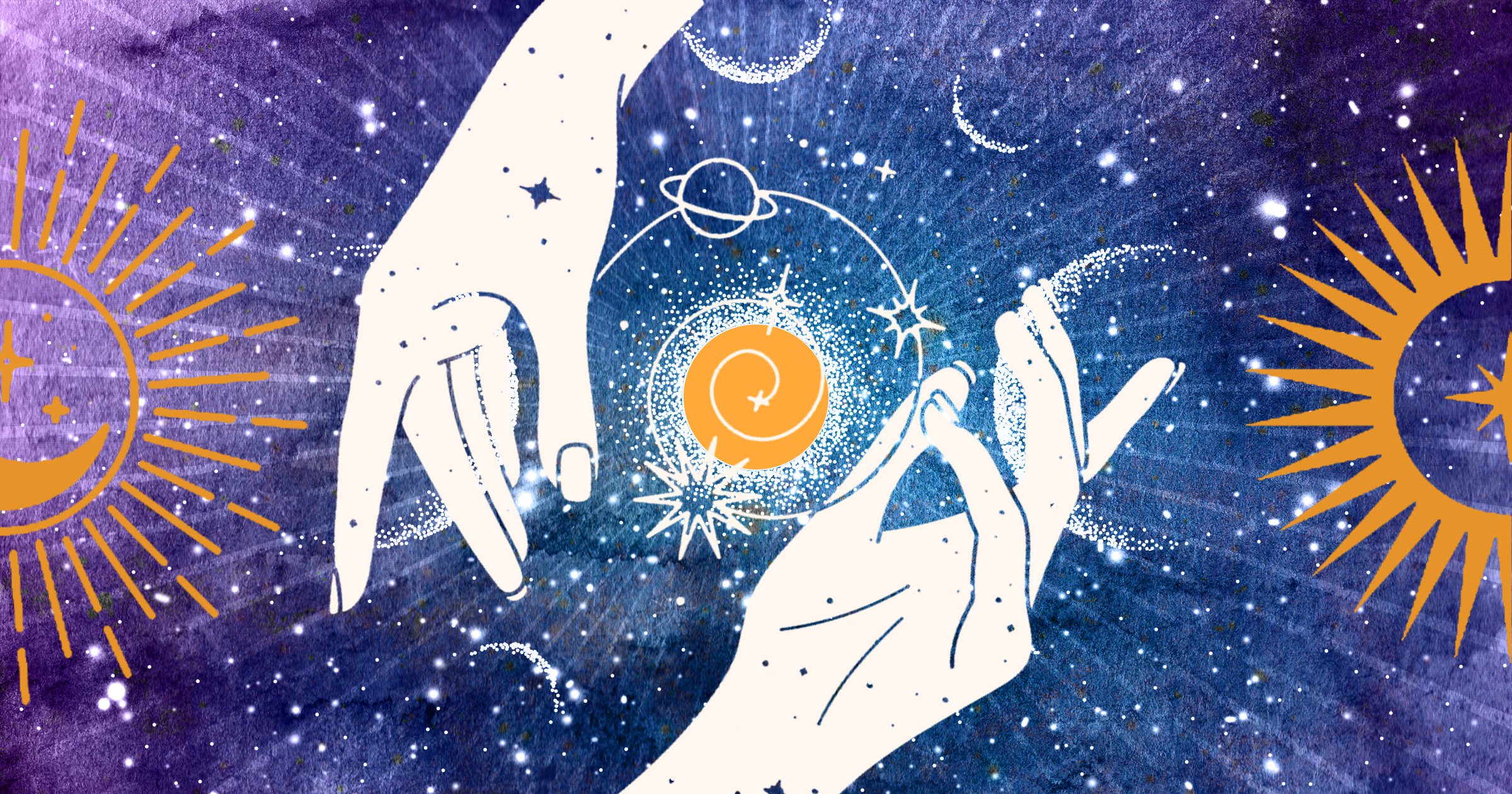 Pluto is an outer planet (i.e. far away) so its transits are slow-moving, but still powerful.

When a planet goes retrograde it means that, visually, it looks like it’s spinning backwards from our vantage point on Earth. It’s only an optical illusion, but it does, astrologically, reverse that planet’s influence.

This Pluto retrograde will stir up feelings and insights regarding the use of power in your world, the sense of control you experience and wield over others.

Power should be a burden, not a shield. Are you living up to your ~best self~ ideals when it comes to how you use your power?

Ahead, you’ll find a tarotscope (that’s a tarot horoscope) for all the star signs for the week ahead – April 24 to April 30 – along with a hint of the shifts you should adopt from now until October.

Read on to find out what’s in store…

Tarot card for Aries for this week: Two of Coins

Meaning: Greed. There, I said it! You have a big appetite, if not a lust, for life and everything in it. You’re rarely sated or satisfied with what you have and are always seeking bigger, bolder, brighter, newer… it can get exhausting. And you use your charisma, assertiveness, even aggressiveness, to get what you want.

The Two of Coins asks you to examine this theme this week. Less can mean more. Contentment comes from satisfaction with where you’re at. Take more notice of your gifts and advantages.

Tarot card for Taurus for this week: Four of Swords

Meaning: You are a very responsible and practical sign, and others tend to default to letting you do it, get on with it, organise it and make it happen. And you let them do that as you also like to have control over stuff.

But… the Four of Swords signals you need to let others do more in your world this week.

You are tired and, frankly, pissed off that it always seems to be you sorting stuff out. So, take a back seat, withdraw, retreat. Consciously let others take their share of the load.

Tarot card for Gemini for this week: Knight of Wands

Meaning: You can be a bit of a fire starter in other people’s lives and business. Spilling the tea and gossip is a specialty topic of yours, and you’re adept at digging for info and releasing it to maximum effect.

You are charismatic and inspiring, and you can motivate people to do great things (and bad ones). You love drama and excitement, and stir it up regularly, just for fun.

Consider the consequences of some of this scandal-lust. Temper your need to set other people off, if it’s not driven by ultra good intentions. Rein it in a bit this week.

Tarot card for Cancer for this week: Queen of Swords

Meaning: All Cancerians have a secret thrill at the thought of being rescued, saved, put on a pedestal and looked after 24/7… ah, bliss. If only someone would sweep in and take control, especially of the icky/dull/stressful parts.

Cancer, it’s only a fantasy. The Queen of Swords asks you to be the one to take full ownership of your issues this week.

Sort them out, tackle them, address them head on. You can do it, you will benefit from it, you will feel powerful and confident as a result of doing it. Use your power for your own good.

Tarot card for Leo for this week: Four of Wands

Meaning: Home and work are on your mind, when it comes to the theme of control and power.

The Four of Wands sees you eyeing a new opportunity or chance for progression, in both areas, and you’re readying yourself to make that bold leap. Put your back into this.

Maybe this is a combined location/work change where you get a new home alongside a new job, or even studying opportunity. Seek ways to make your location work harder for you.

Seek ways to move onwards and upwards through your place in the world.

Tarot card for Virgo for this week: The Hanged Man

Meaning: There is an important area of life that you feel thwarted, stuck, done to vs being the doer, and it’s frustrating. The Hanged Man is a limbo card, you’ve hit a dead end.

What to do? Well, it’s all happened for a reason, to force you to pause and rethink what you’re doing. Take stock of the story so far, and look at the situation from other perspectives and angles.

You will have an epiphany here and see a totally new way to tackle this. Wait for inspiration, reflect, and meditate on it.

Tarot card for Libra for this week: The Emperor

Meaning: The Emperor is ALL about power and control, and represents typical imbalances of both. You need to think hard about where you’re done to and where you’re the doer, and where it feels uncomfortable or off balance.

You can be so charming and diplomatic that it can turn into shape-shifting and people-pleasing. You don’t like conflict and can suppress your own opinions or needs in order to avoid it.

Stop doing this. It doesn’t work long-term (you end up blowing up). Get back on balance.

Tarot card for Scorpio for this week: Seven of Coins

Meaning: You feel pressured to carry on being a certain way or doing a certain thing you’ve endured for a long time, even though you know, deep down, it’s not working like it used to.

You are ready to acknowledge this, express it, and seek change. The Seven of Coins shows this has been a long time coming, is a slow-moving issue, and you can, gradually, ease your way out of it and onto a new path.

Tarot card for Sagittarius for this week: Four of Coins

Meaning: Freedom and independence are absolute deal breakers in your world, Sagittarius. You cannot stand to feel hemmed in, thwarted, told off, or restricted.

The Four of Coins reveals you have hit a rut someplace, feel like you’re in a Groundhog Day scenario and it’s driving you nuts.

Why are you letting this happen? Take your power back, take control, and take responsibility for making the necessary changes to get you un-stuck!

Tarot card for Capricorn for this week: Four of Cups

Meaning: You have stared at something and over thought it so much that you’ve kind of sucked the life out of it, and now don’t appreciate it any longer. It could be a role, place, or relationship, but it once made your heart flutter.

Cap, you can be controlling, and you can overthink things and try to have a grip on all that moves. It’s tiring and also defeatist. You end up loathing the very thing you once tried so hard to protect.

Step back, adjust your perspective, let it be. A bit of distance is no bad thing right now.

Tarot card for Aquarius for this week: Two of Wands

Meaning: The Two of Wands hints that you have relinquished all control in an area of life and have been just going with the flow, seeing what happens, waiting and seeing. And, tbh, not much has happened. It’s all still where it was.

Aquarius, you need to step in and do something here, make a choice, act, create a change.

Nothing changes unless something changes, and you’re the one who has responsibility here. Go fix it. You will feel 100% better.

Tarot card for Pisces for this week: Six of Cups

Meaning: The theme of reflection this retrograde for you Pisces is your childhood and youth.

Go back, with the affectionate and nostalgic Six of Cups, to a time when control or power was a big theme in your life.

Consider your life lessons here, there is valuable insight waiting to emerge.

Your daily Metro.co.uk horoscope is here every morning, seven days a week (yes, including weekends!). To check your forecast, head to our dedicated horoscopes page.

Kerry King, the tarot queen, uses tarot and star sign wisdom to create inspiring forecasts and insights, with over 25 years fortune telling experience, and many happy clients all over the world. You can book a personal, written reading, which comes as a beautifully illustrated brochure, through Etsy or join her new Tarot Club and get weekly forecasts and more for £5 a month.