Zelensky, an Aussie win and upsets galore at an ever out-of-touch Grammys

Coming just a week after the Oscars “slap heard ’round the world”, Monday’s Grammys were never going to be this awards season’s wildest water cooler event. But with a batch of unpredictable upsets and a surprise cameo from Ukrainian president Volodymyr Zelensky, boy did they try. 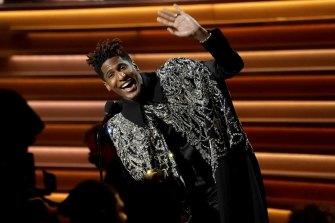 Jon Batiste accepts the award for album of the year for We Are at the 64th Annual Grammy Awards on Monday.Credit:AP

The Recording Academy’s crowning night has long had a reputation for head-scratching decisions after bestowing awards that routinely bypass cultural consensus or prevailing public opinion.

Criticisms over past awards have led to major institutional change at the organisation over the past year, including expanding its voter base and removing the secretive decision-making committees that led to singer The Weeknd boycotting last year’s ceremony.

Even so, this year’s instalment was an all-timer of “Wait, what won?” discombobulation.

Jon Batiste, better known as the band leader on Stephen Colbert’s late night talk show, somehow took the night’s top prize, album of the year, for his staid We Are. Batiste had been the night’s most nominated artist, with 11 nods.

“I believe this to my core… the creative arts are subjective,” went his acceptance speech, a sly nod to the dismay he already sensed ping-ponging around the room over the decision.

The other major wins, song of the year and record of the year, were similarly unexpected: a double nod to Leave the Door Open by Silk Sonic, the light ’70s throwback made up of Grammys favourite Bruno Mars and Anderson .Paak.

“We are trying really hard to remain humble. But in the industry we call that a clean sweep,” said Paak, referencing the duo’s four wins from four nominations. “I know a lot of you fans might be upset, so we’ll get out of here before the internet starts talking.”

Pop starlet Olivia Rodrigo, whose breakout anthem Drivers License was a pop culture phenomenon last year and whose album Sour was one of the biggest debuts of all time, was widely favoured to sweep the awards’ top prizes, potentially emulating a feat set by fellow Gen Z icon Billie Eilish in 2020. 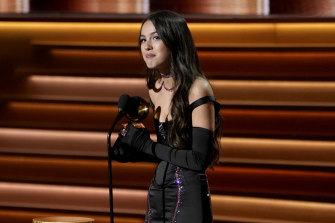 Early favourite Olivia Rodrigo had to be satisfied with just a best new artist win.Credit:AP

Instead, she had to settle with just one major prize – best new artist, in which she beat Sydney rapper The Kid Laroi – and two other trophies in the minor pop vocal categories. She was gracious in her win, thanking the Academy for making “my biggest dream come true.”

In the show’s biggest coup, Ukrainian president Zelensky, who had been rumoured to make an appearance at last week’s Oscars (he didn’t), turned up at the Grammys instead, delivering a sobering address from his underground bunker about the power of music and imploring viewers to “tell the truth about this war.”

“Our musicians wear body armour instead of tuxedos,” he said. “They sing to the wounded in hospitals, even to those who can’t hear them. But the music will break through anyway.” Up next, Justin Bieber on a piano.

The ceremony was also bittersweet for rock band Foo Fighters, who won three awards – best rock album, rock song and rock performance – in the wake of drummer Taylor Hawkins’ death. The band pulled out of a scheduled performance following Hawkins’ death, but his presence at the ceremony lingered. 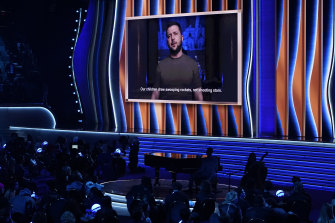 Eilish’s strong performance of her single Happier Than Ever saw her take the stage in a Hawkins t-shirt, and the In Memoriam segment – a medley of songs from late Broadway legend Stephen Sondheim, performed by Ben Platt, Cynthia Erivo, Leslie Odom Jr and Rachel Zegler – began with an extended tribute to the popular rocker.

The awards show, which included a pre-broadcast ceremony where the bulk of prizes in the 86 categories were handed out, also started strong for homegrown talent. 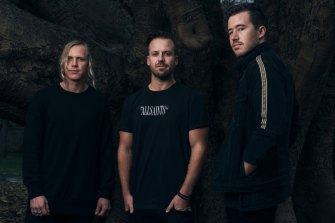 Sydney dance group Rufus Du Sol, who had been Grammy-nominated twice in 2020, won for best dance/electronic recording for their expansive Alive, the same track that won them multiple ARIAs last year. The trio – Jon George, James Hunt and Tyrone Lindqvist – beat out big names including James Blake and David Guetta to win the prize.

In their acceptance speech, Lindqvist expressed shock over the win. “Being in there and hearing our name was very surreal. It feels so good… I want to cry, but I’m laughing.”

Crying and laughing. After the night’s bizarre final winners were announced, music fans were likely left with the same conflicted emotions. In short, more of the same hilarious madness from the Grammys.