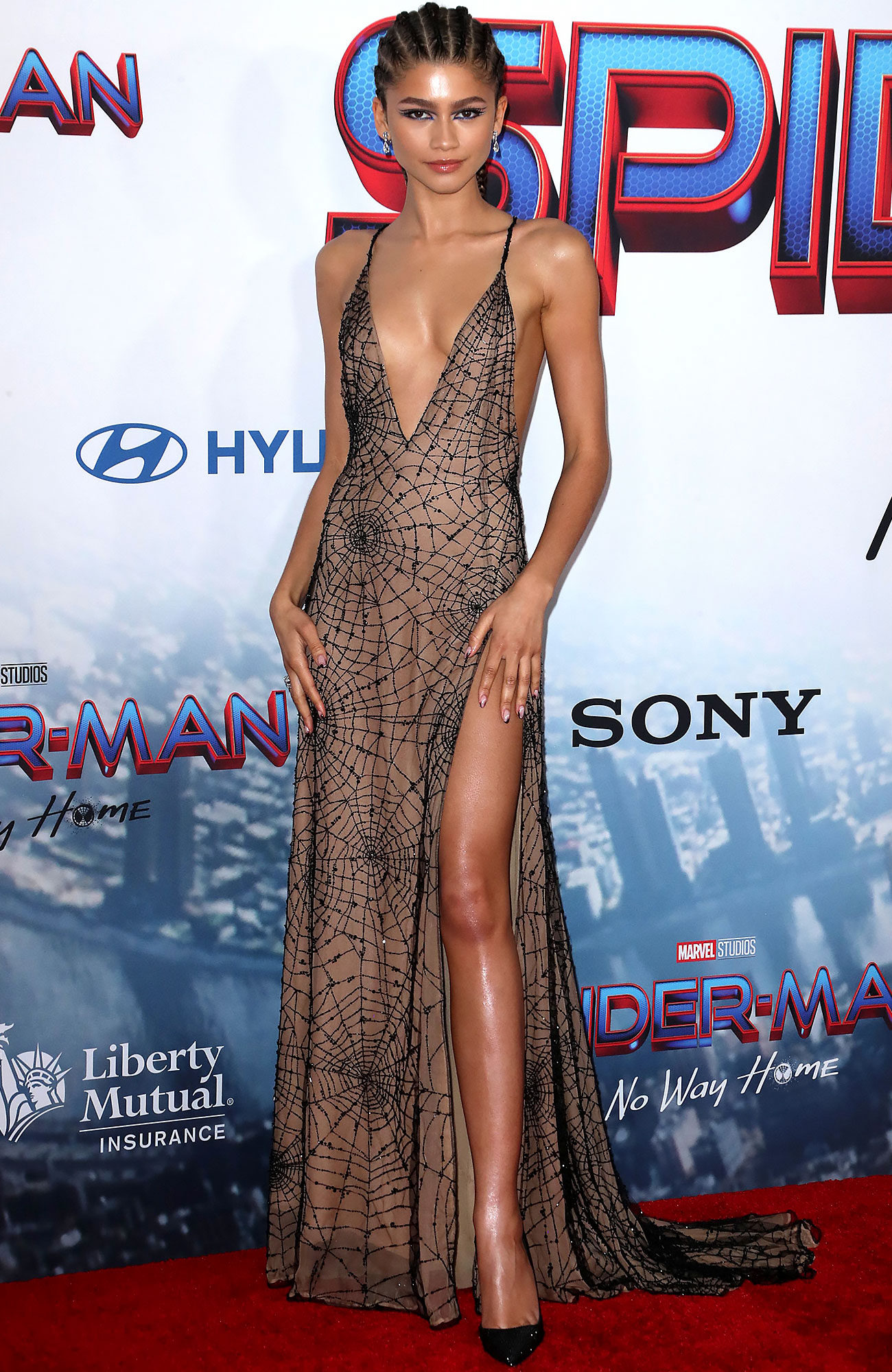 She loves her symbolism! Zendaya made quite the statement at the Spider-Man: No Way Home Los Angeles premiere. How, you ask? The 25-year-old actress hit the scene in a couture creation that was custom made with cobweb detailing.

The star, who works with stylist Law Roach, teamed up with Valentino for the one-of-a-kind gown that had a next-level shout out for the Marvel-verse. With sequin detailing from top to bottom, a plunging neckline and a thigh-high slit, the ever-stylish star managed to put a super chic spin on the whole spider situation.

The on-theme moment didn’t stop there though. Valentino’s Creative Director Pierpaolo Piccioli also created a face mask complete with intricate detailing to really drive home the fact that Zendaya is a stylish superhero.

When it came to accessories, the actress dazzled in Stuart Weitzman sequin pumps and nearly 27.84 carats of Bulgari jewels. She paired 9.71-carat drop earrings with two stunning rings from the jewelry house.

In the glam department, The Greatest Showman star had her styled in butt-length braids. The Lancôme ambassador also rocked understated makeup that placed an emphasis on eyeliner.

To no surprise, fans were understandably obsessed with the symbolic slip dress, taking to Twitter to share their love for the look. “The spiderweb dress? The hair? The leg slit? Miss Zendaya has done it again,” a user wrote, while another said, “Zendaya is the queen of references.”

The latter comment couldn’t be more accurate, as the star has made a point to weave in subtle symbolism during every inch of the Spider-Man press tour.

For example, during the London premiere, the star stunned in an Alexander McQueen ensemble that was embroidered with crystals that resembled a web. She even added spiderweb earrings.

The week prior, she arrived at the Ballon d’Or at the Théâtre du Chalet in Paris wearing a Roberto Cavalli number that featured a gold-plated spine reminiscent of Dr. Octopus. The character first appears in The Amazing Spider-Man 3 and makes his return in Spider-Man: No Way Home. While fans obviously picked up on the reference, Zendaya confirmed her intentions with her outfit via Instagram Stories.

Gold Goddess! Zendaya Owns the Red Carpet at the Women in Film Gala

She re-shared a post that compared the two to her Instagram Stories. “We love a reference,” she captioned the photo.

Zendaya’s love for paying tribute to her films with fashion pre-dates her Spider-Man tour. Rewind to the premiere of Space Jam: A New Legacy in July, and the actress put a couture spin on Lola Bunny’s uniform. She rocked a yellow, green, blue, purple and green patchwork jumpsuit from Moschino that was a clear reference to the fictional character’s reimagined uniform.