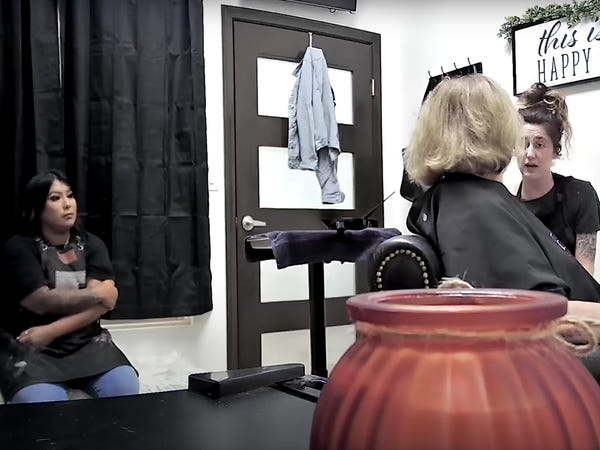 25-year-old Sharon Spellman, a hairstylist based in Los Angeles, is going viral on TikTok after posting footage of a heated encounter with an aggressive customer.

The owner of Simply Insane Hair Salon, who operates out of Bombshell Salon Suites in Simi Valley, shared a video captured by her suite's security cameras.

In the clip, a customer who Spellman referred to as "Robin," refused a root touch-up service from Spellman's assistant, Alex — a decision motivated by racism, according to the hairstylist,.

"She's my assistant," Spellman said in the clip, to which Robin replied, "I don't care. I want you to do my hair and I'm not gonna tell you again."

After some tense back-and-forth in which Spellman insisted that Robin speak respectfully, Robin appeared to lunge at the stylist.

Spellman then demanded that her client "get the f— out."

"My racist client tried to hit me!!!" she captioned the clip. "Robin is the new Karen," she wrote, using the widely-adopted moniker to describe white women who are perceived to be behaving badly in public.

The video has been viewed over 25 million times and racked up over 40,000 comments in support of Spellman and Alex.

Y’all ROBIN IS THE NEW KAREN!!! This literally had me shaking!!!! Beware of this behavior people!!! ##fyp ##xyzbca ##karen

"You handled it well, thanks for sticking up for your assistant," Jellopus, a popular body-positive TikTokker, wrote.

"Where's your salon located?" another asked. "If it's nearby me or family, I am coming to you and requesting your assistant specifically."

In a longer video of the encounter, which Spellman posted to YouTube, Robin can be seen protesting Alex's services and threatening to leave if Spellman did not color her hair. After being asked to leave, a tearful Robin attributed her behavior to being under "a lot of pressure."

The hairstylist also posted the video to Instagram, where she received words of encouragement from public figures including "Queer Eye" star and hairdresser Jonathan Van Ness.

"Good for you! What a nightmare client. You're amazing," he wrote, adding a heart emoji.

In an Instagram Live, Spellman provided more context surrounding the encounter and explained why she believed her client's behavior was racist

Robin, she claimed, had behaved inappropriately towards Alex upon entering the establishment — an allegation Spellman promised to prove by eventually releasing more footage from the salon's security cameras.

"She kind of had this smug attitude right off the bat," Spellman recalled. "She looks Alex up and down and goes, 'Will she be staying here?' You could feel the tension from the second she walked in — she wouldn't look at Alex. She wouldn't give her the time of day."

While Spellman had colored Robin's hair for over a year, she said, this appointment was the first one in which Alex was assisting. Robin, she claimed, knew that an assistant would be joining them and only objected upon seeing Alex, who Spellman says is Latina.

Spellman went on to say that she initially attributed the client's behavior to a generally challenging demeanor — Robin, she recalled, had previously made employees cry and "cussed out" other hairstylists.

As the appointment continued, Spellman said, she began to piece together her client's motivations.

"I connected the dots because I started to think about the way she spoke at every appointment, she was always very derogatory," the hairstylist said, claiming that Robin had previously spoken critically of Latinx people.

Alex joined the live stream to share her thoughts on the situation and confirmed Spellman's account, though neither claimed that Robin said anything that was specifically racialized.

"[Robin] definitely, like, looked me down. All I could do was smile," she said. "And it was digs throughout the whole service."

Alex added that she'd been in "similar situations" before, but rarely in such a heated "one-on-one" confrontation.

"I just didn't know how to react," she recalled, adding that she appreciated social media users' support and positive messages since the clip went viral.

As the hairstylist has engaged with her newfound following — over 351,000 followers on TikTok nearly 100,000 on Instagram — she's received some criticism from viewers who have said they are "uneasy" about her response to the situation and her evident enjoyment of a large social media following.

Some argued that Spellman had not directly addressed the alleged racism with Robin and should have refused to provide service after the client was rude to Alex at the beginning of the appointment. Other critics have said Spellman has centered herself following the situation and not allowed Alex space to fully share her story on the live stream.

Some came to Robin's defense, arguing that the woman in the video showed signs of emotional distress or may have simply been worried about her hair being done by the stylist she was promised.

In the two-hour live stream, the 25-year-old said that she was simply doing her best to handle a difficult situation and the unexpected aftermath of going viral (she had only 2300 Instagram followers before her TikTok went viral).

"There's a lot going on and I'm a little bit flustered," she said."We're spreading awareness and trying to teach people what not to do and how to react in these situations."

Social media fame, she explained, has been chaotic.

"All day long my social media has been really intense," she said. "I'm just trying to tell my story."

Spellman did not immediately respond to Insider's request for comment. Robin could not be reached for comment.

END_OF_DOCUMENT_TOKEN_TO_BE_REPLACED

END_OF_DOCUMENT_TOKEN_TO_BE_REPLACED
We and our partners use cookies on this site to improve our service, perform analytics, personalize advertising, measure advertising performance, and remember website preferences.Ok