At age 12, Tevin Campbell — freshly signed to Warner on the strength of a voice that was already drawing comparisons to Michael Jackson — hopped on a call with Prince. “I remember riding in the limo and talking to him over the phone,” Campbell says. “I knew who Prince was, of course, but at the time, I had a really, really, really high voice, so I didn’t pay attention to a lot of male artists — I couldn’t sing male artists’ songs. To me, meeting Whitney would’ve been, ‘Aaaah!’”

But Campbell’s inability to to scrape the lower register didn’t stop him from working with Prince. It was a brief but successful partnership: Campbell appeared in the Graffiti Bridge film, a sequel to Purple Rain, and sang the Top 15 single “Round and Round,” a brittle track penned by Prince that split the difference between “Sign o’ the Times” and the New Jack Swing that was ascendant in 1990. The two reconvened to work on four more songs that would end up on Campbell’s double-platinum second album, I’m Ready, including another hit, “Shhh.”

But for years, several of those songs have been impossible to find through official channels. “Uncle Sam” and “Paris1798430,” which Prince oversaw, haven’t previously been available on Spotify or Apple Music. Prince also wrote and produced Campbell’s “Halls of Desire,” which isn’t available on Apple Music, and is only on Spotify in a collection called “Naughty 90’s” dated to last year. (The I’m Ready closer “Infant Child,” not written by Prince, is also M.I.A.) While many of the tracks on I’m Ready have been cherrypicked for a Campbell greatest-hits album that is readily available, listeners haven’t been able to stream the singer’s most successful work front to back — meaning it basically hasn’t existed for the modern listener.

'We Can Do It Ourselves': R&B Singers Are Leaving Major Labels

This changes today, when the album will be reconstituted for streaming services, in part because Prince’s estate finally cleared the music for digital release. Campbell says “it’ll be cool to be able to play the album in its original form.”

When Campbell started working on I’m Ready late in 1992, he was still just 16, but was already feeling “a lot of pressure” to deliver a hit album. In 1989, he’d auditioned over the phone for Bobbi Humphrey, a jazz flute player and singer known for her work on Blue Note. Impressed, Humphrey helped set up a showcase for Campbell and sent a video of him covering “Where Is the Love” to Benny Medina, then a senior executive at Warner. “When I saw it, I thought of that famous tape of Michael Jackson auditioning for Berry Gordy,” Medina told Vibe in 1994. “There was a purity in his voice and an incredible coolness on stage.”

Jackson’s go-to producer, Quincy Jones, also declared himself a Campbell fan, drafting him to sing “Tomorrow (A Better You, Better Me)” on his platinum-selling Back on the Block album. “[When] Quincy puts you on his album after doing Michael Jackson, we all knew [Campbell] was a force to be reckoned with,” says Narada Michael Walden, who co-wrote and produced several songs for Campbell. “When you’re 13 years old like that, and you get put on by Quincy, that’s the mark of a prodigy.”

But one downside of being signed so young was that Campbell’s voice hadn’t dropped when he was recording the songs that needed to be hits for him to maintain a career. In 1994, he called the experience of recording his debut, 1991’s T.E.V.I.N., “horrible.” “I didn’t have much of a relationship with the songs and my voice was changing,” the singer told Vibe. “I didn’t have any control over it. I mean, one day it could be high and the next day it could be gone. And that’s why we had to keep going back in and doing songs over.”

Campbell’s team ditched many of the producers on T.E.V.I.N., including Al B. Sure! and Arthur Baker, before I’m Ready. Walden was the main holdover, responsible for four songs on both albums. Campbell’s mother wanted to add Babyface, who was already owning the decade thanks to hits like Boyz II Men’s “End of the Road.” Babyface would go on to contribute three cuts to I’m Ready, including “Can We Talk,” a remarkable hit with verses like a steep, hot climb and a hook like a cooling jump in a lake. While Prince had contributed one song to T.E.V.I.N., he now took on a much larger role, coaching Campbell, who he called “Little Al Green,” at the Record Plant in L.A.

The Prince cuts from I’m Ready fall cleanly into two thematic camps, sex and politics. When it comes to the bawdy stuff, “my voice was sort of a muse for these grown men to write about their love situations,” Campbell says. “They were going crazy with it.” “Halls of Desire,” for example, uses a closed-door motif to walk a prospective lover through a menu of sexual options, starting with an innocent kiss but escalating quickly. By the time Campbell gets to the fourth door, he sings, “I can only tell you what’s not inside/If you open this door, baby, your clothes won’t take the ride.”

But “Halls of Desire” is almost chaste next to “Shhh,” an erotic slow drip that does a lot with one vamp, primarily plump swells on bass and rim-shot drums. The come-ons here are classic Prince, outrageous and head-turning but delivered with overwhelming sincerity. That’s the stuff of the first verse — “I’d rather do you after school like some homework” — and an absurd dialogue about setting the right romantic mood that wouldn’t be out of place in a comedy sketch: “Candlelight? No, I don’t think so — the crackle of the flame will just spoil the flow. Besides, I can be your fire, baby.”

Prince had a bundle of ballads like this, from “Scandalous” to “I Love U in Me” to “Insatiable” to his own version of “Shhh” released in 1995; that’s part of his charm. But for a singer not even old enough to vote, Campbell says recording “Shhh” “was a little extreme” and “way beyond what was being done by anybody my age at the time.” Looking back, he admits, “I didn’t know what the hell I was singing about.” Due to the salacious lyrics, the singer asked his mother to leave the studio when he was recording. But “Shhh” became a Top 10 R&B hit, and Campbell maintains that he’s “glad” he cut the track. “You know exactly who produced it once the first chorus starts,” he says.

Campbell isn’t sure he grasped the full weight of “Uncle Sam” and “Paris1798430” at the time he recorded them either. The first is a cutting track about American racism past and present — “Sam, why’d you let them rape my great grandmother?” Campbell sings, “then go to the oak tree and hang her brother” — while the second is about a black man living in Paris “’til he get[s] his due” in the U.S. 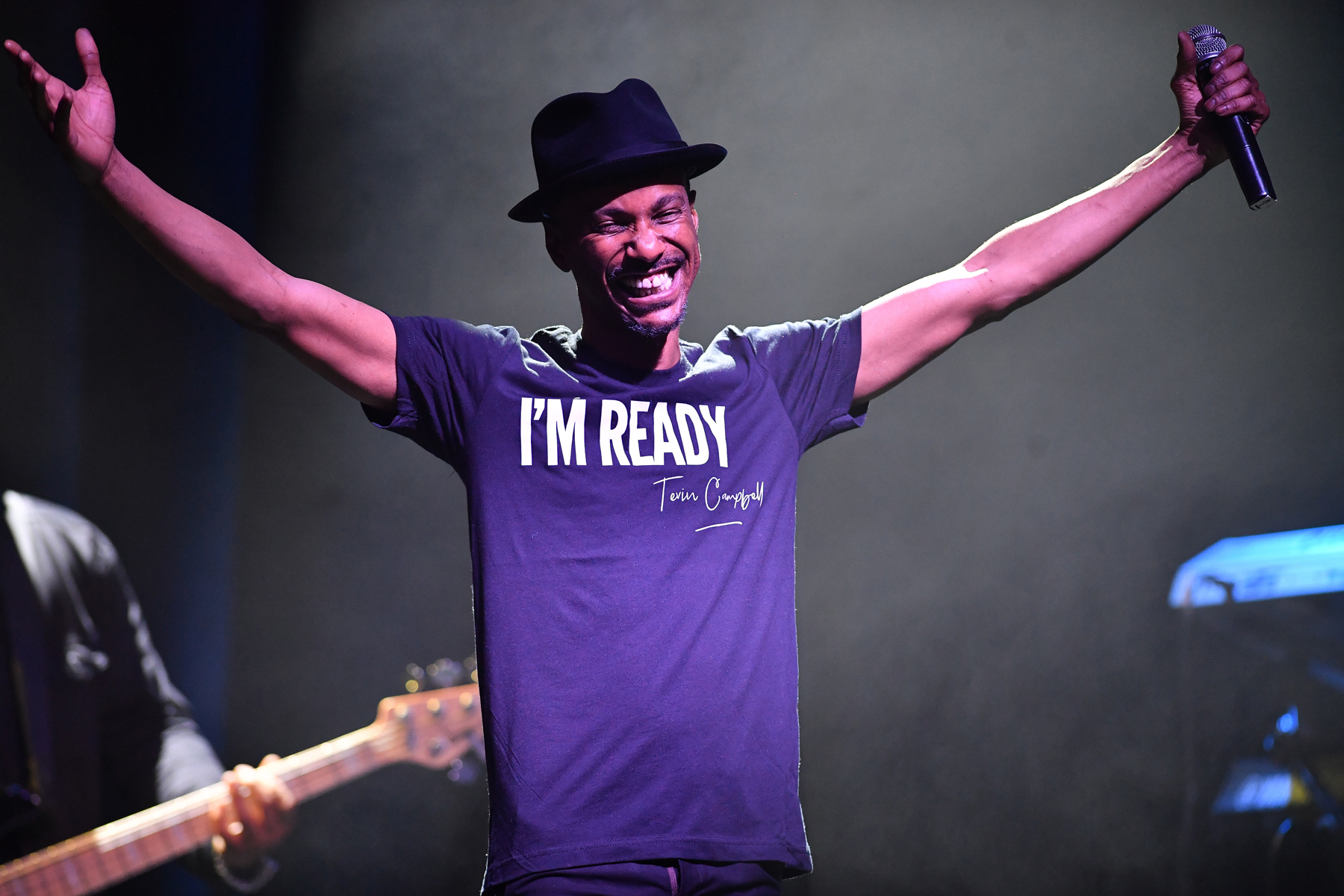 Tevin Campbell says he has “no freaking clue” why his 1993 album ‘I’m Ready’ has never been available in full on streaming services before now. (Photo by Prince Williams/Wireimage)

“The black man’s struggle in this country, I understood that,” Campbell says. “But I didn’t really understand the historical message behind the ‘Paris’ song until later in my life. That record was deep. I started learning about all the black Americans who fled to Paris in my early twenties. When I really got to learn about that rich history, I was like, ‘Oh, my God.’”

Campbell remains a harsh critic of his vocal performance on these tracks. “If you listen to ‘Paris,’ when I’m up on the bridge part, it literally sounds like my vocal cords are being ripped apart,” he says. Prince was also such a distinctive singer that Campbell says he “was intimidated a little bit” by his demos. As a result, when he listens back to these songs now, he hears himself “imitating” Prince more than he does when tackling songs by Walden or Babyface.

If “Shhh” was “extreme” when it came in 1993, especially when delivered by a teen, “Uncle Sam” and “Paris1798430” were extreme in a different way, a world away from the young-crooner-singing-love-songs formula favored by major labels. “That was the golden ticket back in the 1990s: Find an artist that age [young], especially a guy you can market to little girls, that can sing love songs,” Campbell notes. He says Warner was surprised when he turned in “Uncle Sam” and “Paris1798430” — “when something like this comes along, they’re like, ‘Hmm, this might not be a good idea’” — but the two songs stayed on the album, only to get lost in the music industry’s digital transition.

Campbell got a little lost as well: He hasn’t recorded a new album since 1999. He’s working on music and says his voice is in fine form. “My main concern about coming back is being able to financially support it on my own,” he explains. “I don’t want to depend on any record company to do it for me. But I have a fan base, people still streaming my music.”

That group includes Walden, who is adamant that, with the possible exception of Luther Vandross, “I’m not sure there’s a more gifted male singer than Tevin.” Years ago, “we started a song and we didn’t finish it,” Walden adds. “I have the makings of a song here if he makes time to get back and sing it. Get a hold of him, give him my info, tell him to contact me.”