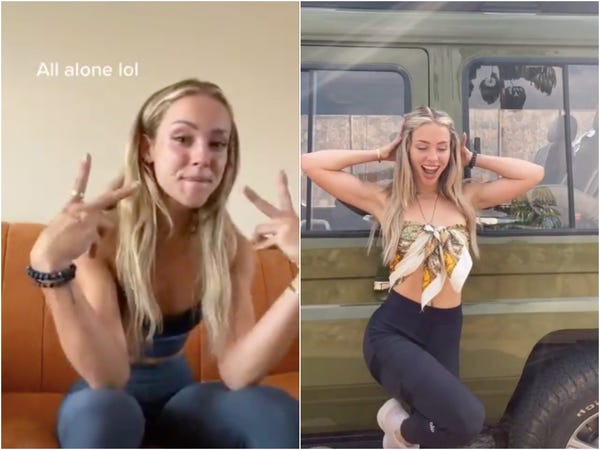 Influencer Charly Jordan said she was taken away from her friends in Rwanda this week because her test for COVID-19 came back positive.

Jordan, who said she traveled to Rwanda to work with gorillas at an animal conservation group, said she had tested negative for COVID-19 when she left the US, and that she and her friends had all been wearing masks in public and sticking to the safety measures since landing.

She had no symptoms and had already contracted the virus three months ago, so she was confused as well as concerned about what was going on.

"I got 100,000 tests afterwards to make sure I was negative," she said in a TikTok over the weekend. "I flew to Rwanda, Africa five days ago, and just got here, and tested positive."

The TikTok has now been set to private, but reshared on Twitter by YouTuber and satirical reporter Def Noodles.

"Literally the f—ing government showed up at my place and dragged me away from everybody I was with," Jordan said in the TikTok, writing that she was taken away by people in hazmat suits. "I don't speak the language, they locked me in this f—ing room, and I can't leave."

The CDC currently recommends people from the US do not visit Rwanda unless it is for essential reasons.

"It's really scary. I don't know why I have it again," said Jordan. "I'm not with anyone I know, and I'm in f—ing Rwanda, Africa, and I don't know how long I'm gonna be here, and they won't tell me anything."

In a follow-up TikTok that has also been removed, Jordan spoke about how she has been smoking marijuana every day for the past three and a half years, and was going "cold turkey" in the hotel room.

"Not only am I completely alone, locked in this room, but I'm having withdrawals and crazy nightmares and not sleeping," she said. "And all the food here is making me sick. So we are just all around not in a good place right now. I've literally just cried for three hours."

Jordan was allowed to leave isolation after four days when two more tests came back negative — it turned out the first one had been a false positive.

She said she wanted to "clear up some confusion" in an update posted to TikTok on Monday.

"Whether you think I should or should not have been traveling is your own opinion," she said. "But I want you to know I did everything by the books in accordance to the Rwandan and US government to make this a safe trip."

"People are allowed to make their own opinions, but I just wanted to give you guys the facts of what actually happened," she said.

Insider has reached out to representatives for Jordan for comment.