From the green room at Stubb’s BBQ, a narrow hallway lined by rope lighting leads to the stage. On any other night, the glowing amber string would be merely an accent to guide performers down a dimly lit passage. But last Wednesday, when Black Pumas played the first full-capacity show in Austin since March 2020, it felt like a runway for the relaunch of live music in a city where it means everything — where statues of Willie Nelson and Stevie Ray Vaughan stand downtown, a stage with a live band welcomes travelers at the airport, and music normally fills more than 250 venues nightly.

Backstage before the first show in a sold-out, five-night stand, the Black Pumas crew stood in a circle of solidarity, holding up translucent plastic cups of tequila for a toast and a moment of reflection. “It’s been a hell of a year,” said guitarist Adrian Quesada, gazing around at his bandmates. “We’re about do an entire show like the Pumas do an entire show, and I’m fuckin’ ready,” chimed in back-up singer Angela Miller. “Cheers to that!” cried frontman Eric Burton. It was both a farewell to a tough year and a warm welcome to the promising future the Pumas have carved out for themselves, even amid a brutal period for the entertainment industry.

With Quesada in the lead, the group walked single-file down the corridor to the stage as the Beatles’ “Because” blared over the PA. At first glimpse of the band, a sea of waiting fans erupted into cheers, and the Pumas took their places on a stage bathed in red light. The soulful organ-and-cymbal crescendo that opens “Next to You” floated up into the sweaty Texas night, and Black Pumas kicked off the show like they’d never missed a beat.

Burton strutted around the stage like he owned it, his body moving fluidly in time with the music. His magnetism and exuberance are focal points of the show, but everything is integral — Quesada’s scorching guitar solos, the smooth vocal layers of backup singers Lauren Cervantes and Angela Miller as they dance in sync, the vibe of JaRon Marshall’s lush keys, and the tight rhythm section of bassist Brendan Bond and drummer Stephen Bidwell, who provide the music’s backbone. Black Pumas aren’t the world’s biggest band yet, but they possess such enormous charisma that no stage feels too big.

By the second song, “I’m Ready,” Burton had hopped the crowd barrier to mingle among more than 2,000 fans packed shoulder-to-shoulder. The intimacy and size of the crowd felt surreal after months of small gatherings of close friends. But live music possesses a magic that turns strangers into siblings, transporting people away from the outside world and even the thoughts within their minds, and into a moment in time, connected to one another. As Burton told RS before the show, “I take to the stage with the motivation for fellowship — it’s just conversing.” The arching canopy over the Stubb’s stage jutted up into the night like a church steeple as Burton preached the gospel of the Pumas to congregants, promising them ascendence to some higher plane. “It sounds a bit grandiose, but for real, it’s this transcendental feeling where you’re suspended in time and space,” Quesada says of playing live.

It was a moment of catharsis long overdue. Wednesday’s show originally sold out in the fall of 2019, before the pandemic hobbled an entire industry and put a moratorium on Austin’s fundamental identity. Concertgoers began arriving at the gates of Stubb’s more than two hours before doors on Wednesday, and by 6:30 p.m. the line wrapped around the block. Mother and daughter Maria Andrade and Rebecca Wood were among the first on site and said they were “very excited” for live music to be back, because “it’s a way to your soul.” 20-year-old Pablo Martínez, a first-time visitor to Austin, traveled over a thousand miles from San Luis Potosí, Mexico, just for the show. He says he “fell in love” with Black Pumas after watching the live session for the band’s hit song “Colors.”

As the gates opened, Martínez and the others joined the crowd of music lovers flooding down the sloping orange dirt along the banks of Waller Creek, which cuts through the heart of Austin. “There’s something magical about the dirt down there,” Stubb’s General Manager Ryan Garrett likes to say. His statement is rooted in fact, since Stubb’s owns the land it sits on, a rarity for a venue and an important factor in the business weathering the pandemic. Even so, Stubb’s was still forced to furlough all but six people from their staff of 110 part- and full-time employees last year. 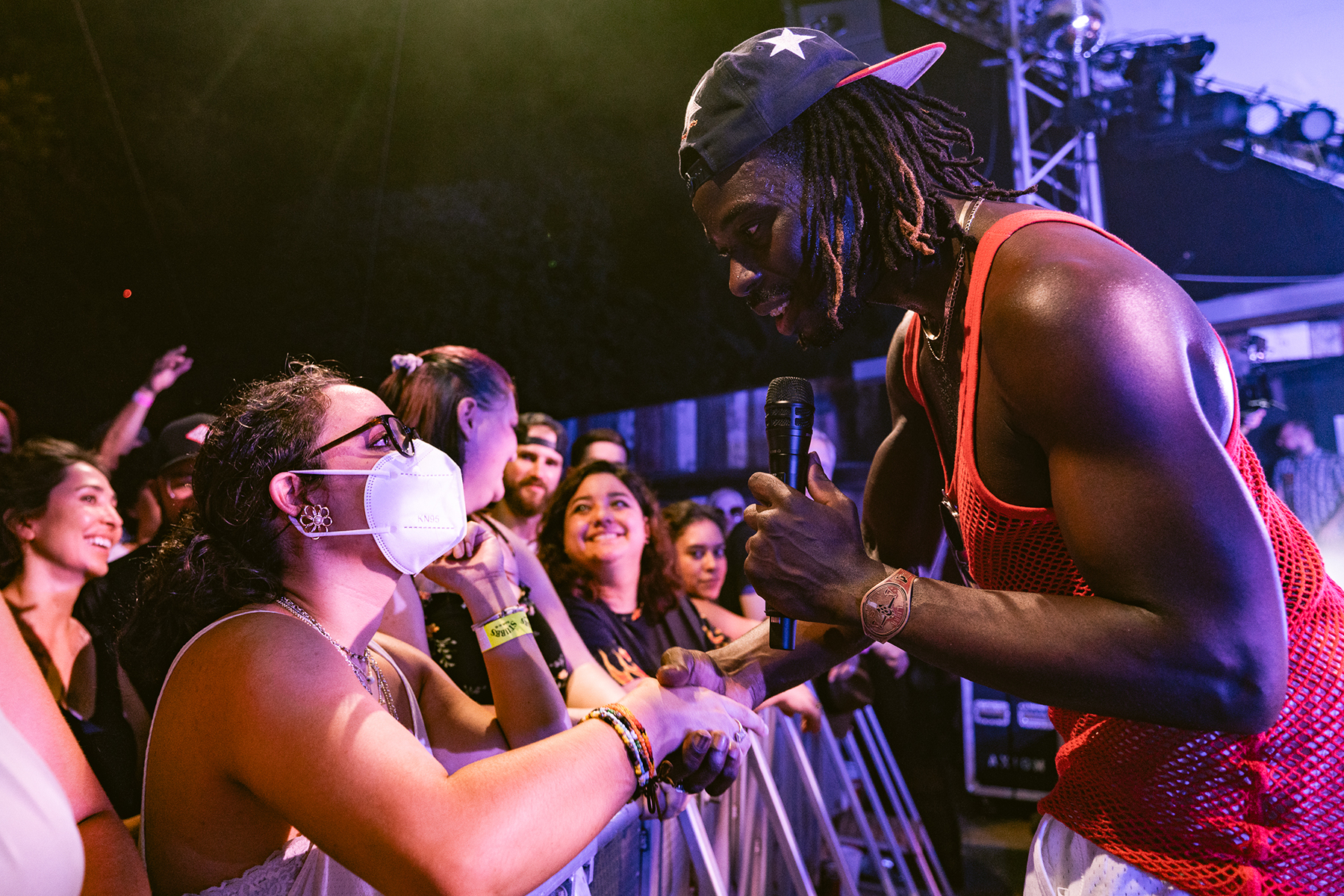 Black Pumas frontman Eric Burton greets the crowd at Stubb’s on Night One of their sold-out five-show stand.

With music returning, Garrett plans to “bring everybody back to work — from production staff to stage hands to sound techs to lighting engineers, bartenders, security staff.” Garrett himself started at Stubb’s as a short-order cook, and has worked as a bartender, waiter, restaurant manager, and venue manager at the club. “I have done every job there is to do,” he says. He’s kept in touch with employees, and says they overwhelmingly want to return to work. Sure enough, on Wednesday, Gilbert Villanueva was back at the enormous iron gate at Stubb’s, where he’s worked for 15 years, checking IDs and slapping on neon paper wristbands. In its time, Stubb’s has hosted Iggy Pop, Blondie, Metallica, even Bob Dylan. Though marquee artists might be able to sell more tickets at a larger venue, Garrett calls his club the “notch in the belt” that musicians want.

Stubb’s may have been first to fling open the doors, but other venues in Austin aren’t far behind. Across the live music capital, clubs have sold-out dates on the books. A dozen or more of the city’s prominent venues are situated in the Red River Cultural District, a few blocks southeast of the Texas capitol building’s dome. Cody Cowan, the executive director of the non-profit entity behind the district, calls it “one of the last live music destinations,” and defines himself as “the one trying to keep the party going.” Citing Nashville, Memphis, and New Orleans alongside Austin, Cowan says these cities represent “the four contiguous live music experiences left in the country” — meaning places where you can walk to multiple venues in a concentrated area. According to Cowan, “the live-music capital moniker was created by non-music people for non-music people,” but he says it recognizes the truth “that there is something special about music in Austin.”

A 2016 report estimated that music had a $1.8 billion impact on the Austin economy, including its effect on tourism. But more than just the return of the live music business, reopening represents the return of community. Cowan sees this as “a healing moment” that has actual therapeutic benefit to the artists and music fans who frequent shows as an outlet for expression and a way to connect with friends.

One block north of Stubb’s, the indie mainstay Mohawk resumed limited capacity shows over the weekend, and expects a return to full capacity at some point this summer. The club’s booker, Austen Bailey, says shows fulfill a “primal instinct of gathering” with “people crammed together, sloshing beer all over each other.” The Mohawk’s slogan is “All Are Welcome,” and Bailey says the club is a “communal gathering space where all these weird groups come together united under the banner of music.” Next door to Mohawk is Cheer up Charlies, a bastion for the queer community and popular hangout for dance parties, DJs, and some of the city’s most exciting local acts, where packed crowds have already begun to return. There’s also the goth- and industrial-centered Elysium, metal-focused Valhalla, and many more on the street. “Everyone’s desperate to go back, because every single show is blowing out,” says Jack McFadden, talent buyer at ACL Live, the venue that hosts the famous Austin City Limits television show, founded in 1974. ACL Music Festival, which Black Pumas will play in October, sold out in record time when tickets went on sale last month.

Musicians like Jackie Venson, another of Austin’s rising stars, have anxiously awaited live music’s return. “Driving downtown last year, nobody was out at night,” she recalls. “It was so wild to see a huge city go dark at 7:30.” Now, with people walking Red River Street as music emanates from clubs, the native Austinite says it “feels like home again, finally back to the Austin I recognize.” However, she also sees an opportunity for change in the music scene here. In the wake of a summer focused on equity and justice, Venson, who is black, has led a conversation in the press and on social media, urging venues to take this moment to improve the diversity of their bookings and commit to fair pay for performers.

By the later dates in their Stubb’s five-show run, Black Pumas were just as musically tight but had fallen into an even more relaxed groove onstage, making eye contact and feeding off each other’s energy. In one moment on Sunday night, Burton stepped back and mimed a basketball jump shot to Cervantes, who leapt to receive it as the two cracked up. As with each night, Burton ended the set leaning out into the crowd for an a capella chorus of “Colors,” a goosebumps-inducing moment — maybe because it’s their most anthemic song, or simply because the sound of a thousand voices singing in unison has been unheard for a year. 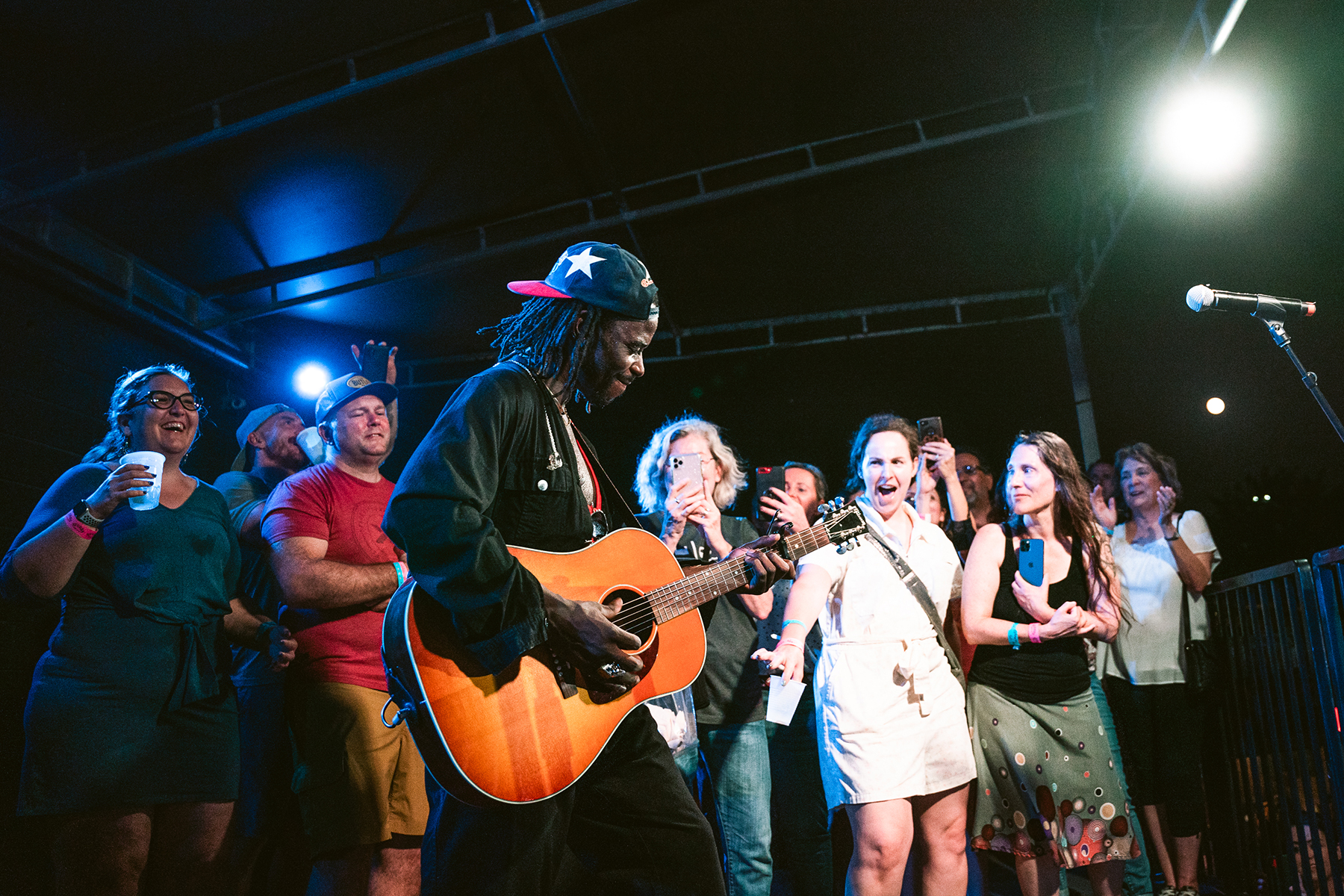 “I take to the stage with the motivation for fellowship,” says Black Pumas’ Eric Burton.

As an encore, Burton appeared at the back of the venue, commanding 2,000 heads to swivel and find him in the spotlight, where he began a solo acoustic cover of Tracy Chapman’s “Fast Car.” “I had a feeling that I belonged/I had a feeling that I could be someone,” he sang, in lines that could soundtrack his life story. In a matter of months, he went from busking on the Santa Monica Pier to performing sold-out world tours. Burton’s vehicle to get there was Austin, Texas: Long before they sold out Stubb’s or performed at the Grammys, the Pumas packed tiny C-Boy’s Heart and Soul.

Black Pumas have become one of the city’s proudest musical exports, and on the advent of live music’s return, it felt right that they were right back where it all started. “I was a musician without anything,” Burton adds. “This town put me in such a position where what I was doing was validated. Austin saved my life.”